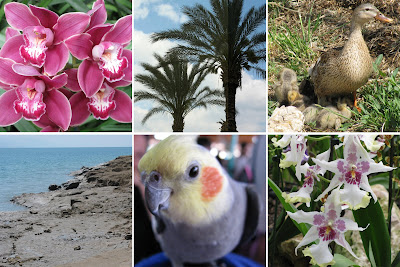 Goodness! I never intended to be away for so long, but you can see from my photos that we've had a busy time. 'Handmade in Israel' was put aside for a week or so, and Passover holidays took over. This little space of mine is normally the place reserved for writing about my handmade work, but a brief deviation is sometimes a good thing, right? I couldn't let the opportunity pass to show you just a handful of the photographs I took during our travels throughout this lovely country of mine over the last couple of weeks. We headed south to the Dead Sea and Qumran, visited a parrot farm and a stunning orchid park north bound, have hiked in a nearby forest where the pine cones were abundant, and driven far south to Beersheva to the Israeli Air Force Museum (for my Dad!). Israel is such a tiny country but it never fails to amaze me how varied the landscape is here. We have been surrounded by lush green plants one day, then swum, well, actually floated, in the salty, muddy waters of the Dead Sea, the lowest point on earth, the next. What a fabulous couple of weeks we have had, and what an amazing country I live in! 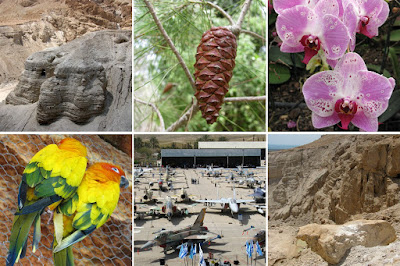 Just so that I can pretend that this is a craft blog, whilst I was busy running around Israel, Hadass at Spring Colors was busy preparing a lovely Etsy Treasury to honor the birth of a new niece, and I was delighted to find that she included some of my new baby cards in the collection. They can be seen below, on the bottom row, on the right. 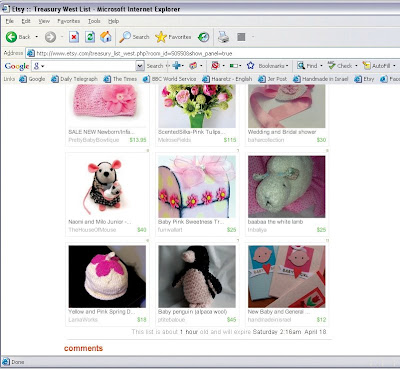 Posted by Handmade in Israel at 10:54 6 comments

Blogging may be a little sporadic over the next couple of weeks, but I will try and pop in and let you know what is going on as much as possible. Pesach, or Passover, is rapidly approaching. It is a festival that requires a lot of preparation and spring cleaning, though once it has arrived we will celebrate a special Seder together and enjoy the seven-day holiday with some fun days out. My Dad has already arrived from England and basically my crafting and card making takes a back seat for a short time. However, before I go, I have a few pieces to show you that I have been busy creating over the last week. 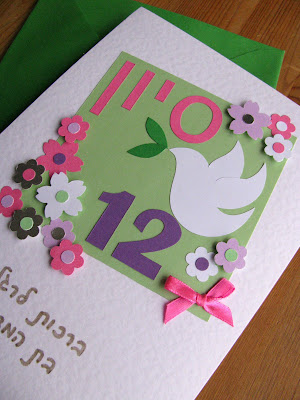 This pretty Batmitzvah card for a girl called 'Sivan' (the Hebrew name of the third month on the Jewish calendar and a popular girl's name) shows a Dove of Peace with the olive branch in it's beak and the Hebrew greeting saying "Blessings on the occasion of your Batmitzvah". This was a large, custom-made card and the design was based on a new design for my Batmitzvah card range shown here. 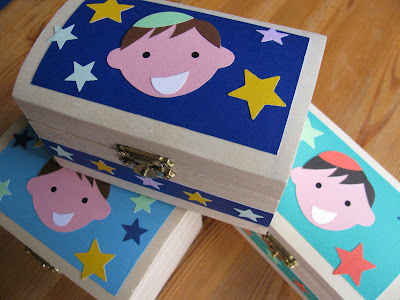 Not to be accused of only creating for the girls, I put together some treasure boxes for a spring fair last week especially for the boys! It was a fair at a religious school, so I thought it would be fun to show the boys wearing their kippot, the small skullcap that is worn by observant Jews around the world. Whilst bad weather meant that it wasn't such a busy evening for any of the vendors, the boxes were well received and I hope will be enjoyed by the boys who receive them. 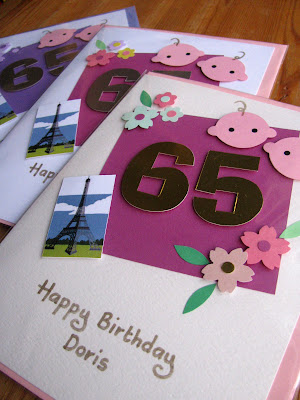 Some time back my Aunt in the States asked me to send her a bunch of cards for all her friends celebrating their 65th birthdays this year. For some extra special friends she asked me to illustrate the fact that they have recently become grandmas and that their shared roots are in Paris, where they met my Aunt many years ago as students. I know that the cards have arrived safely in America, and hope that they will be well received when the special birthdays are celebrated.

Just in case I am unable to drop in here again before the impending Seder, may I wish all my Jewish friends and customers out there 'Chag Pesach Sameach', a happy Passover festival.

Posted by Handmade in Israel at 22:58 7 comments