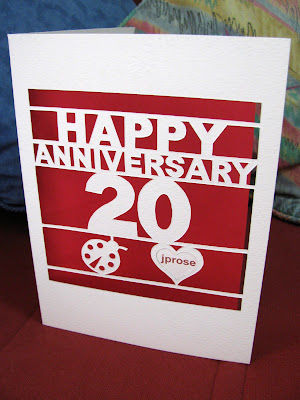 A customer liked the anniversary card that I made for Mister Handmade in Israel. She and her husband were soon to be celebrating their 20th wedding anniversary so she asked me if I could create a similar card but one which included the number 20. She also asked me to add a ladybird, a heart and the letters jprose, the couple's "trademark". After a last minute change of mind about the card being in Hebrew or English, I cut this by hand from white stock and lined it with a bordeaux-coloured paper inlay. My customer was very happy with the card.
"Thank you for the card" she wrote to me in Hebrew. "It came out beautifully. I am ready to order now for our 25th anniversary in 5 years time ." 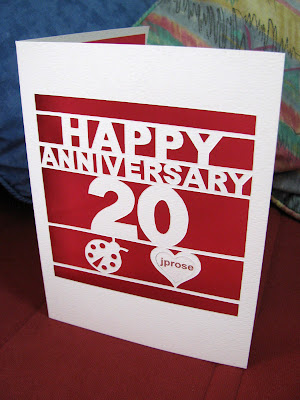 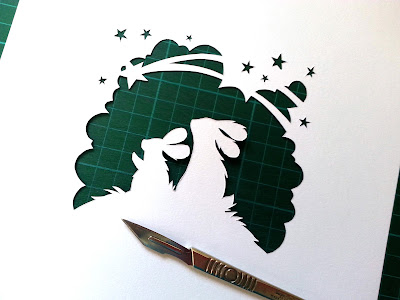 Those of you who know a little about the world of papercutting will have heard of Paper Panda. Paper Panda, otherwise known as Louise Firchau, is a UK based papercutting artist who creates some incredible pieces in three very distinct styles. She has also taught thousands of people to papercut through online groups using a papercutting starter kit. As well as selling her artwork, she also sells templates of some of her beautiful designs.
Recently I cut my very first Paper Panda template (and my very first cut from any template for that matter!). I must admit that I find it far more satisfying when the cut is of my own design, but this was quick, fun, and could be an option for the customer who perhaps does not have the budget for a customised piece of mine, but would love a handmade gift for some lucky person.

If you would like to purchase this papercut or something similar, email me using the link on the right-hand side for more information. 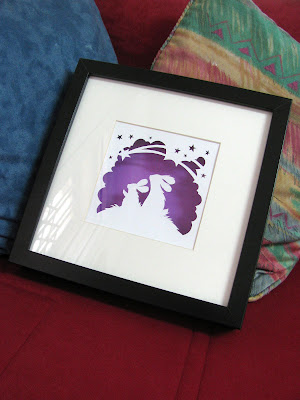 Posted by Handmade in Israel at 08:13 3 comments 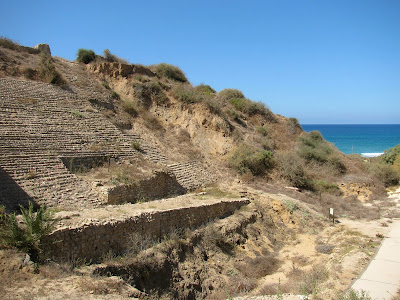 The boys have been begging for a family camping trip for a long time. I used to camp a lot when I was a Girl Guide, but that was a long time ago and, quite honestly, I rather like a bed and a hot shower these days. During the recent celebrations of Hol Hamoed (the six days between the Jewish festivals of Sukkot and Simchat Torah are referred to as Hol Hamoed, or "weekdays [of] the festival") we finally got round to this camping trip. We chose Ashkelon National Park, on the southern Mediterranean coast, as our destination. 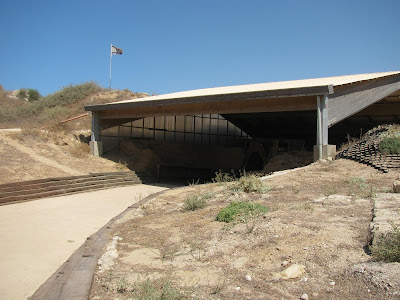 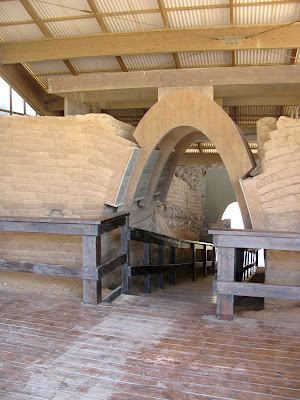 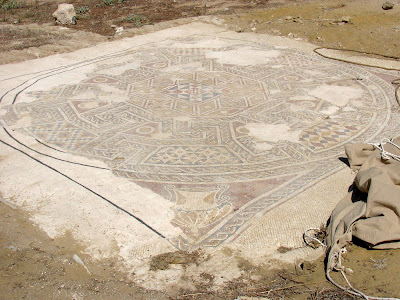 The park is situated a few kilometres south of modern Ashkelon. It is a beautiful national park filled with remnants of ancient history, picnic spots and extensive grounds to pitch tents within walking distance to the beach. Ashkelon was once a thriving commercial centre, particularly during the Roman period, and the national park showcases impressive remains from that period, as well as from the different civilizations that lived in the area, including the Canaanites, Philistines, Persians, Phoenicians, Greeks, the aforementioned Romans, Byzantines, Muslims, Crusaders and, of course, the Jews. Roman remains in the park include marble and granite columns and capitals, a Roman basilica and Roman statues. The site also features a Middle Bronze Age gate with the world's earliest arch, dating back to approximately 1850 BCE, above. People arriving at Ashkelon would pass through the gate and its arched corridor. Ashkelon is also linked to the exploits of the biblical Hercules Samson. 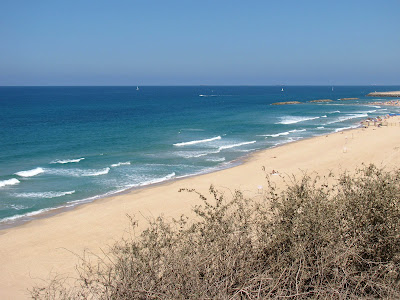 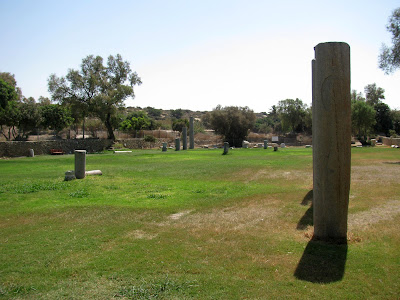 The name Ashkelon comes from the word shekel, a unit of weight, an appropriate name for a city with a major commercial port. Early Ashkelon was located along the ancient Via Maris, the "Way of the Sea", a road that linked Syria and Egypt, and was therefore an important station for maritime and overland commerce.
The park sits within an ancient rampart. A trail at the foot of the Crusader wall of the city offers a lovely view of the park, the sand dunes south of Ashkelon, and modern-day Ashkelon. In the centre of the park are the ruins from the Roman period, the most striking being the pillars from the basilica, a courtyard whose walls and floors were covered with marble and which was surrounded by rows of columns and chambers. Here was where the public activity of Ashkelon took place, above. The artwork and architectural remains on view near the basilica include a statue of the Egyptian goddess Isis, and a statue of Nike, the winged goddess of victory. Her head is crowned with a wreath and in her arms is the god Atlas, standing on a globe.
The park also contains a system of about 60 wells of different types and, unusually, excavations have revealed the largest dog cemetery in the ancient world. This was apparently a Phoenician custom connected to healing rites. 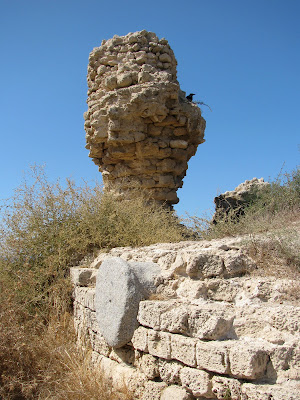 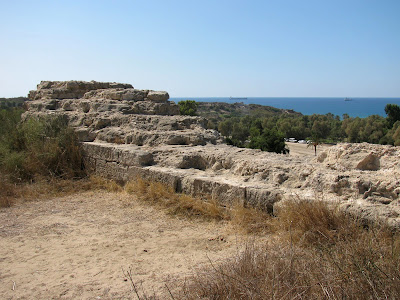 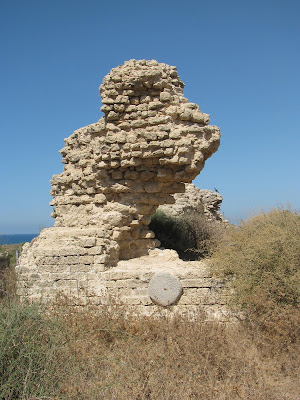 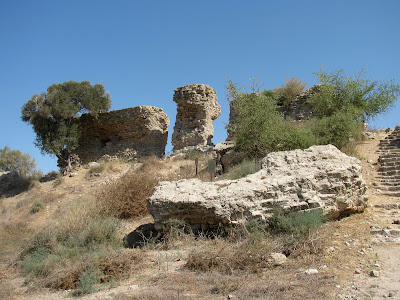 Admittedly it was Mister Handmade in Israel and I who toured the archaeological sites. The boys had gone to the beach, located just a few steps down from the campsite. A nice plus to our camping experience!

Did I fall in love with camping all over again? Well, the site was very nice. It has large, well maintained grassy areas, clean bathrooms, lots of picnic tables to eat at, and areas where barbecuing is allowed. The view towards the sea first thing in the morning, and as the sun set, was to die for. It was, however, very hot at times, and I did not have the best night's sleep. The jury is still out. 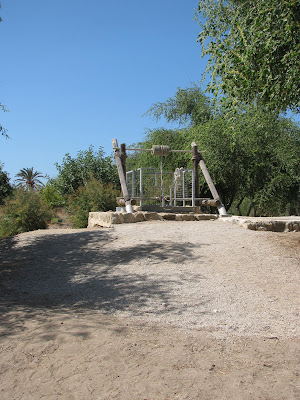 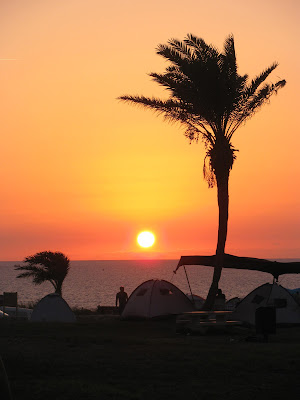 Posted by Handmade in Israel at 08:47 3 comments 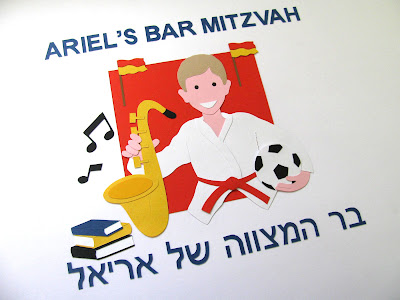 Ariel recently became Bar Mitzvah in Sydney, Australia. His Mum asked me to design the invitation for his celebration. His hobbies, she told me, include karate, soccer, futsal (yes, I also had to look it up!), playing the saxophone, his Xbox, gaming on his laptop, tennis, swimming at the beach, trapeze, and ice skating. Oh, and his favourite colour is red. The list was long enough for me to get started!
After a few emails back and forth we decided to concentrate on karate, soccer and playing the saxophone as the main themes. Mum asked if there was any way to add a wave to the image, to represent the beach, and if there was space, a book was requested too, since Ariel likes to read. 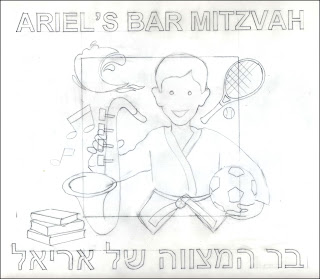 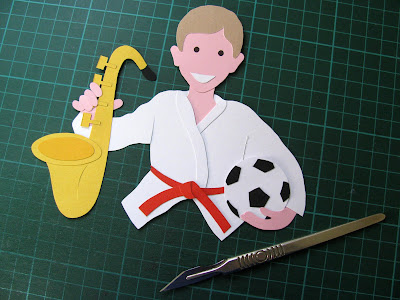 I sketched Ariel in his white karate kit and red belt. He has a black and white soccer ball (erm, football!) under one arm, and his saxophone in the other. I planned to include a couple of music notes next to the saxophone, and below that a small pile of books. Behind him I originally sketched a tennis racket and ball, and a big wave, but Mister Handmade in Israel thought it was a dolphin, so I had to think again! Ariel's Mum suggested a yellow and red flag instead of the wave. Apparently they have them at all Australian beaches to show where you can swim. She felt that it signifies the beach and Ariel's love of swimming. 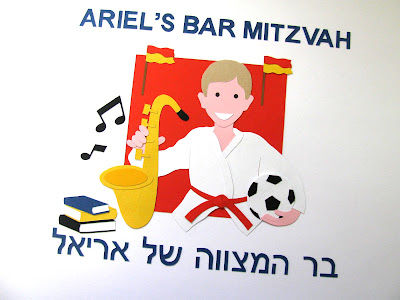 Once I had created my paper portrait of Ariel, I added it to a red background box, which matched his red belt nicely! The dark blue lettering announces Ariel's Bar Mitzvah in English and Hebrew.
I sweated a little bit when my artwork took its time getting to Australia but, after several emails and irate calls to the Post Office, it just turned up. Hooray!
My customer was very pleased with the way it looked and seemed thrilled with the final printed invitation.
Posted by Handmade in Israel at 07:56 3 comments

Two Birthdays and a Wedding

Regarding the current situation here in Israel, it's hard to carry on as usual, but that's what we've got to do. We get up to work, send the kids to school, drive on the roads, and walk the streets. I am still at my desk cutting away. Here are my latest cards... 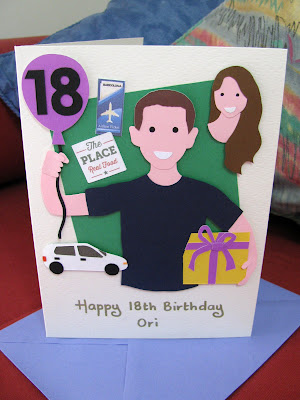 This young man receives Handmade in Israel birthday cards from his family almost every year. This year, for his 18th birthday, Mum asked me to create a paper portrait of her son, along with some of the things that are important to him at this time in his life. His girlfriend came first of course, followed by a picture of a plane ticket to Barcelona (lucky thing!), his white Volkswagen Polo, and the logo of "The Place", the burger bar where he currently works. I gave the birthday boy a balloon with the number of his special birthday on it, and placed a gift in his other hand. 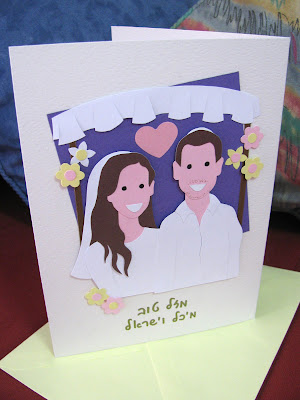 Another customer asked me for a wedding card for a soon-to-be-married young couple. She sent me a picture of the couple and I soon created their paper portraits, showing them dressed in their wedding finery and standing in front of the chuppah, the canopy beneath which Jewish marriage ceremonies are performed. I decorated it with a few flowers and added a big pink heart. The Hebrew greeting says "Mazal Tov Michal and Yisrael". 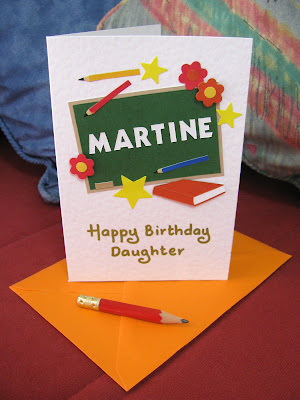 Finally, Martine is a teacher so her Mum asked me if I could create a birthday card on that theme. I cut out the letters of her name and stuck them onto a green chalkboard. Next I create a little paper book and some coloured pencils, then finished the card off with some flowers and stars to give it a more celebratory look.
Posted by Handmade in Israel at 08:55 4 comments 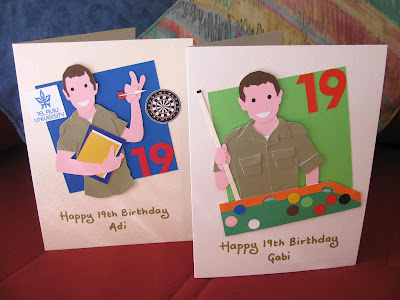 Last year Gabi and Adi had just finished school and were preparing for their compulsory military service. This year they celebrated their 19th birthday as soldiers in the Israel Defence Forces (IDF). Even though there was a possibility that they would not be home on their birthday, their Mum still wanted a customised card for each of them, just like they receive each year. 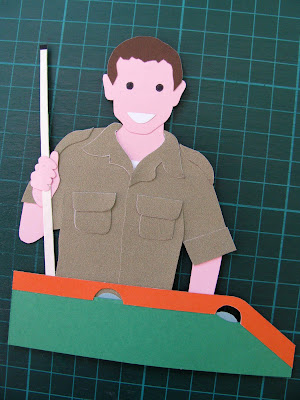 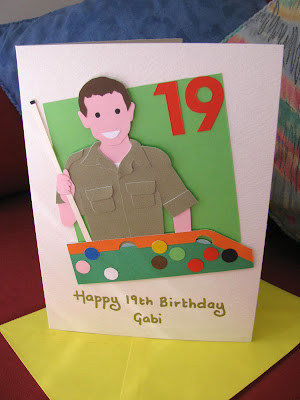 Mum asked me to show Gabi in his olive green army uniform. He enjoys playing snooker so, after a lesson from Mister Handmade in Israel about the differences between snooker, pool and billiards, I showed him standing by a snooker table, cue in hand. 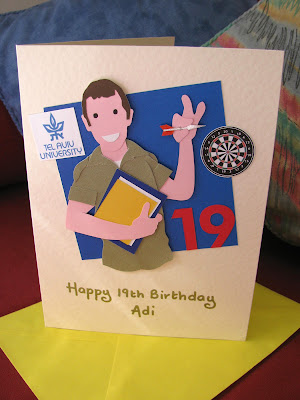 Adi is also in uniform. He enjoys playing darts. I added a dartboard to the card and he can be seen aiming a dart at it. Adi is also currently studying at Tel Aviv University, so he has a collection of books under his arm, presumably to be used once he has finished playing darts, tee-hee!
Posted by Handmade in Israel at 15:13 2 comments