So another great Passover week has gone by. We travelled North, we travelled South, and as usual I have far too many photos to show you in one post! I'm going to split the posts up and introduce you to some fabulous places in Israel one at a time. 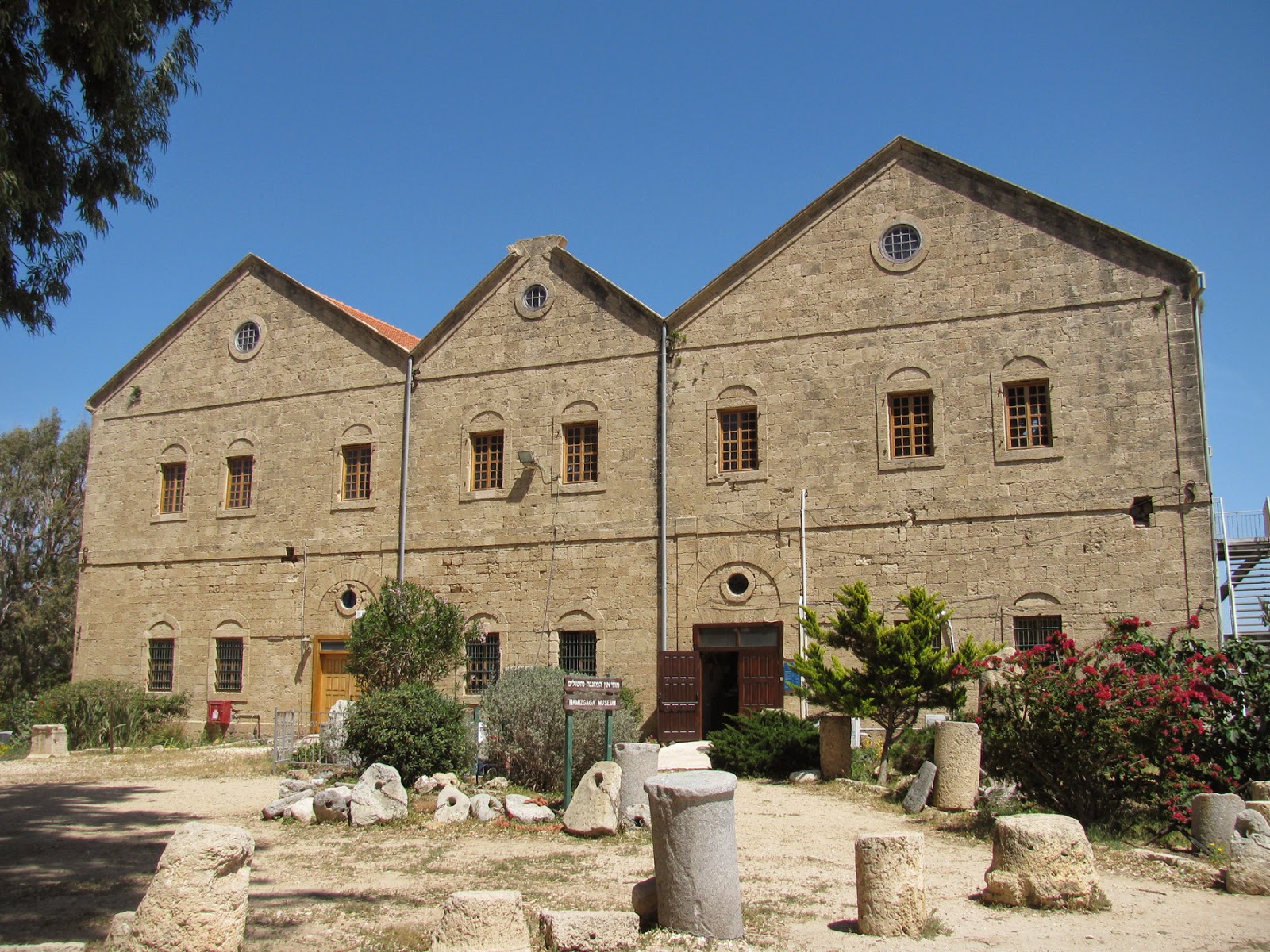 The first day of Chol HaMoed was the day that we travelled the furthest. Tel Dor is an archaeological site located on Israel's Mediterranean coast, about 30 km south of Haifa. Dor (meaning "generation" or "habitation" in Hebrew), was known as Dora to the Greeks and Romans, and was colonised by the Sea Peoples and King Solomon, the Assyrians, the Phoenicians, the Greeks and Romans and others, right down to the Crusaders rule of Palestine between 1099–1291. In 1799 the French army, commanded by Napoleon, retreated from the failed siege of Acre and camped at Dor. They dumped and buried their heavy canons, blew up the ammunition, and then retreated to Jaffa. In recent times the ancient port has uncovered archaeological treasures galore and the uninterrupted sea views from the “tel” or mound make it a breathtaking place to visit. We had a wonderful time there! 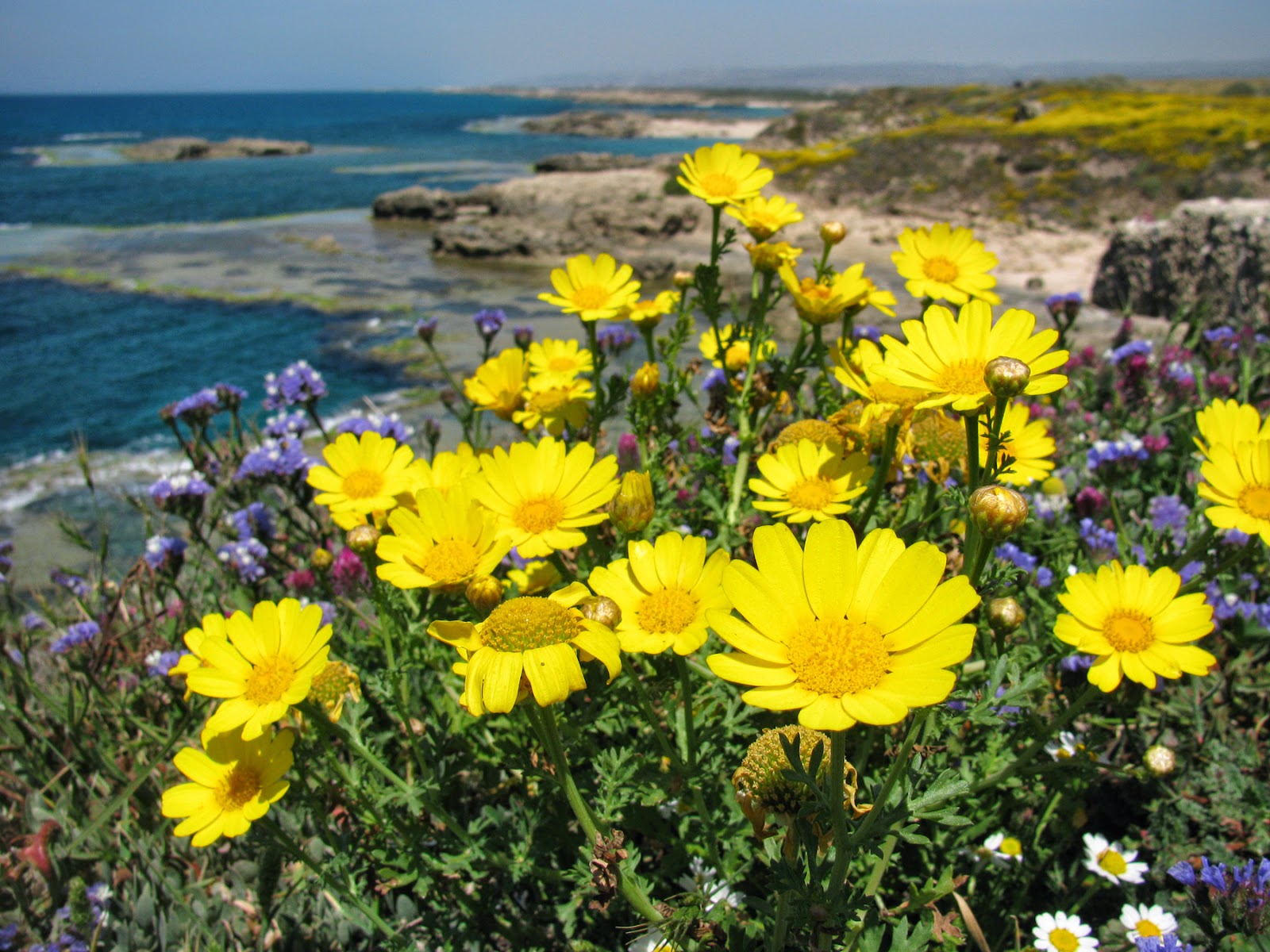 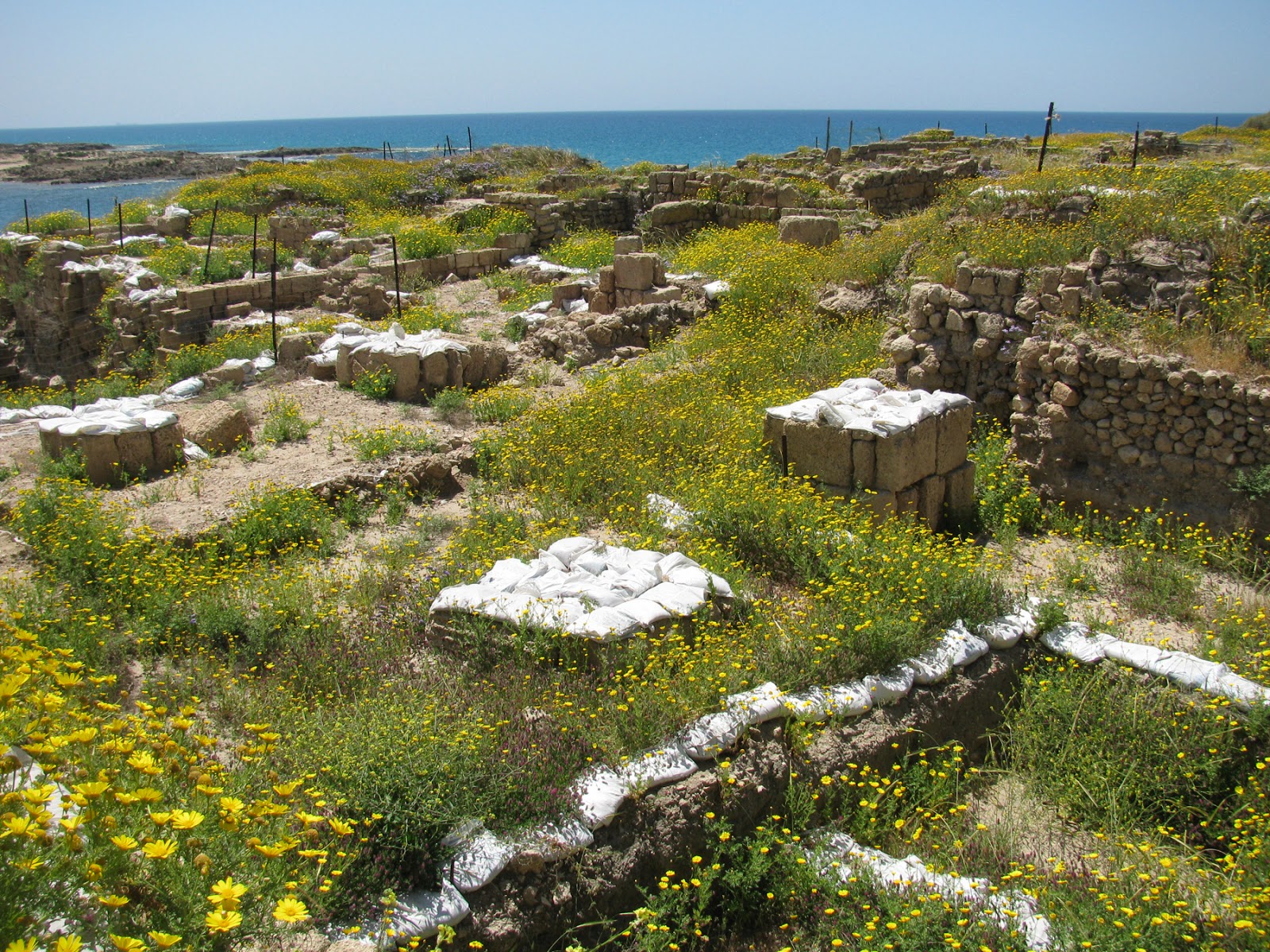 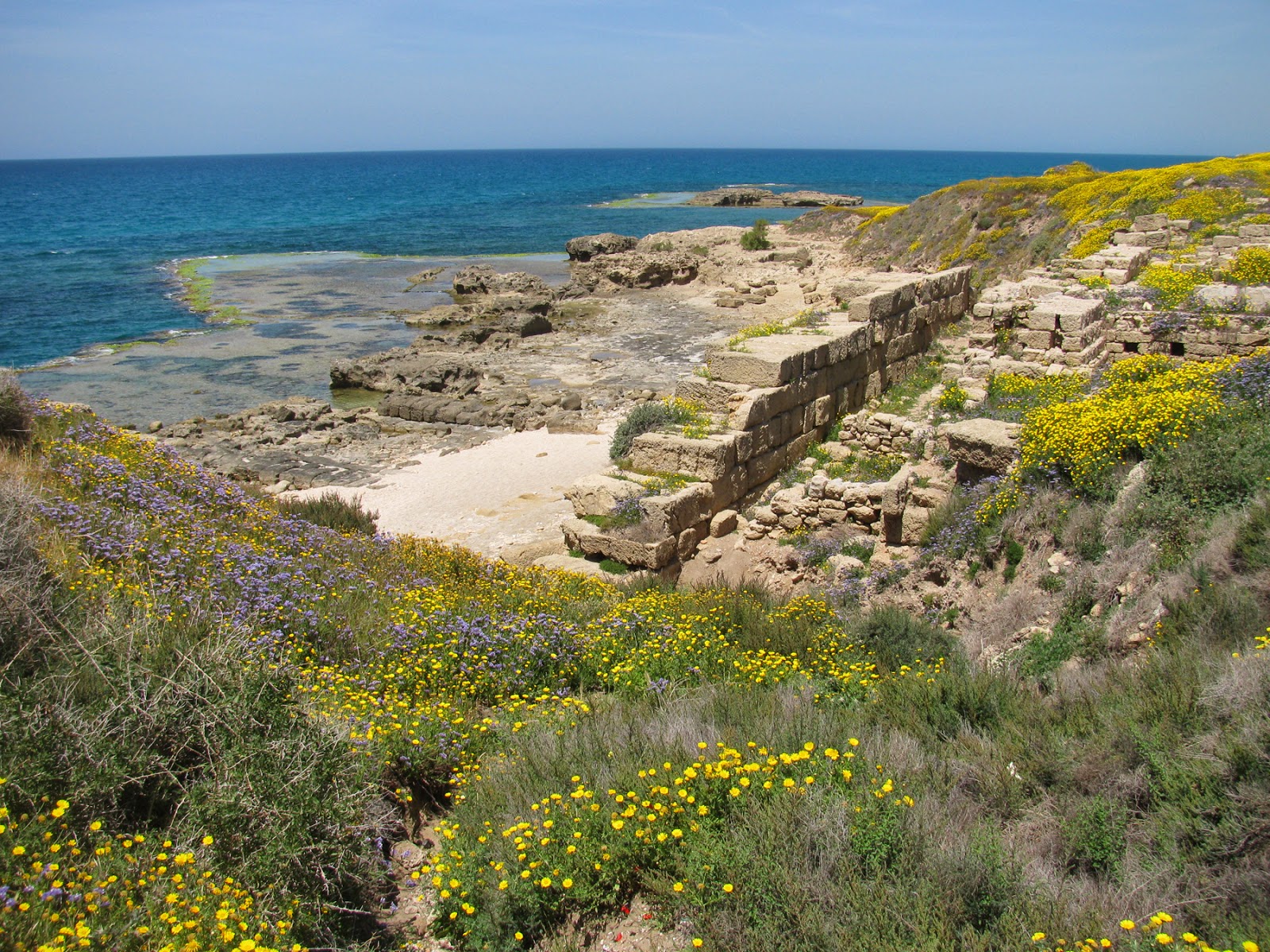 In 1882 Baron Edmond de Rothschild established what would become known as the Carmel Winery, with a branch in nearby Zichron Yaakov. He opened a bottle factory in 1891 to produce glass wine bottles for the winery and as we drove into Kibbutz Nahsholim, situated on Dor beach, the three-gabled building which is now home to the Mizgaga ("Glassworks") Museum came in to view. The museum houses a small but interesting collection of artifacts, including guns and other armament of the Napoleonic army, dug out of Tel Dor or salvaged from the seabed, and was the perfect way to begin our visit to the area.
An interesting aside, the bottle factory was managed by a young chemical engineer named Meir Dizengoff. When the factory closed (due to poor-quality sea sand, malaria and a lack of profitability), Dizengoff went on to become the legendary first mayor of Tel Aviv. 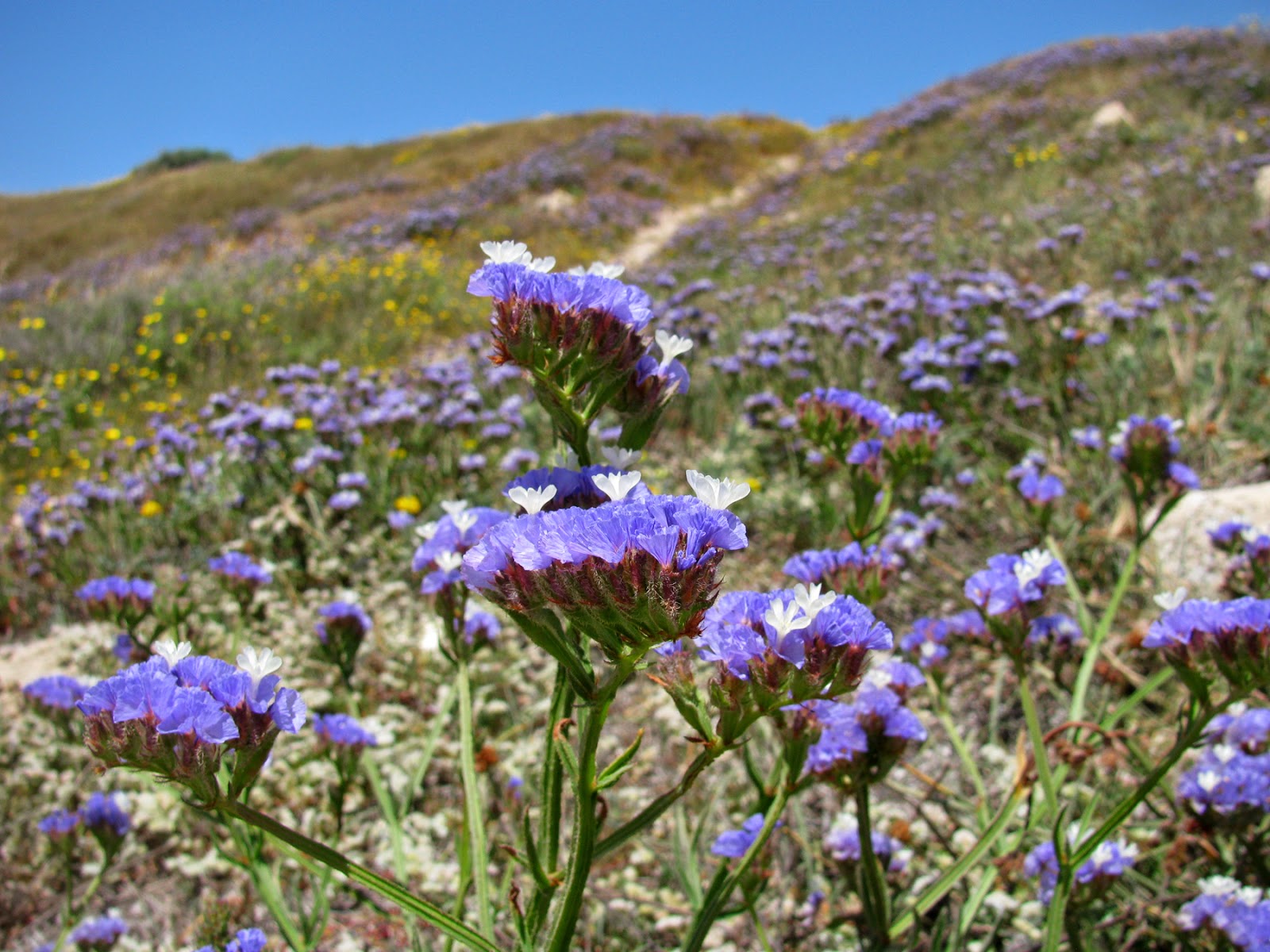 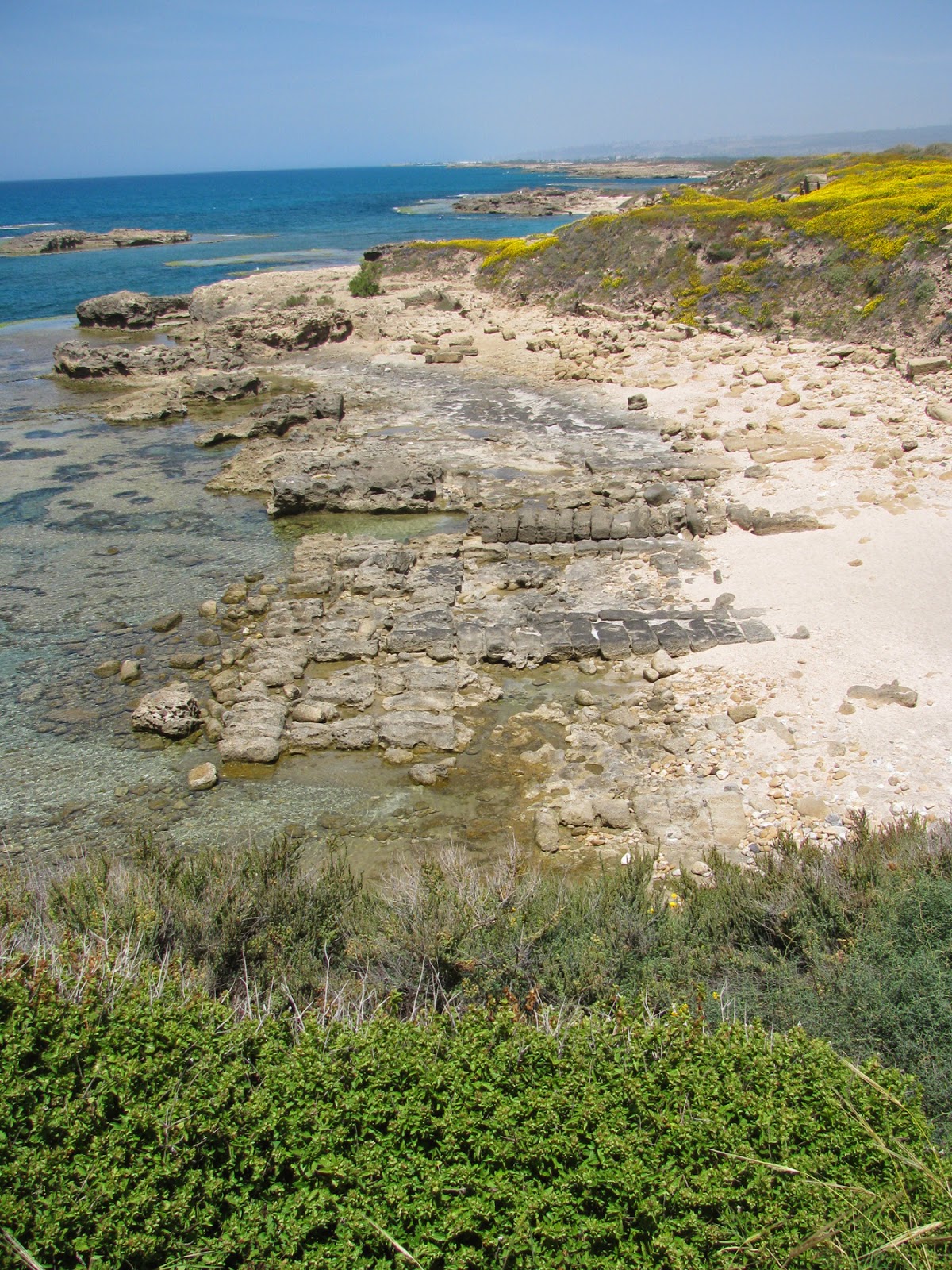 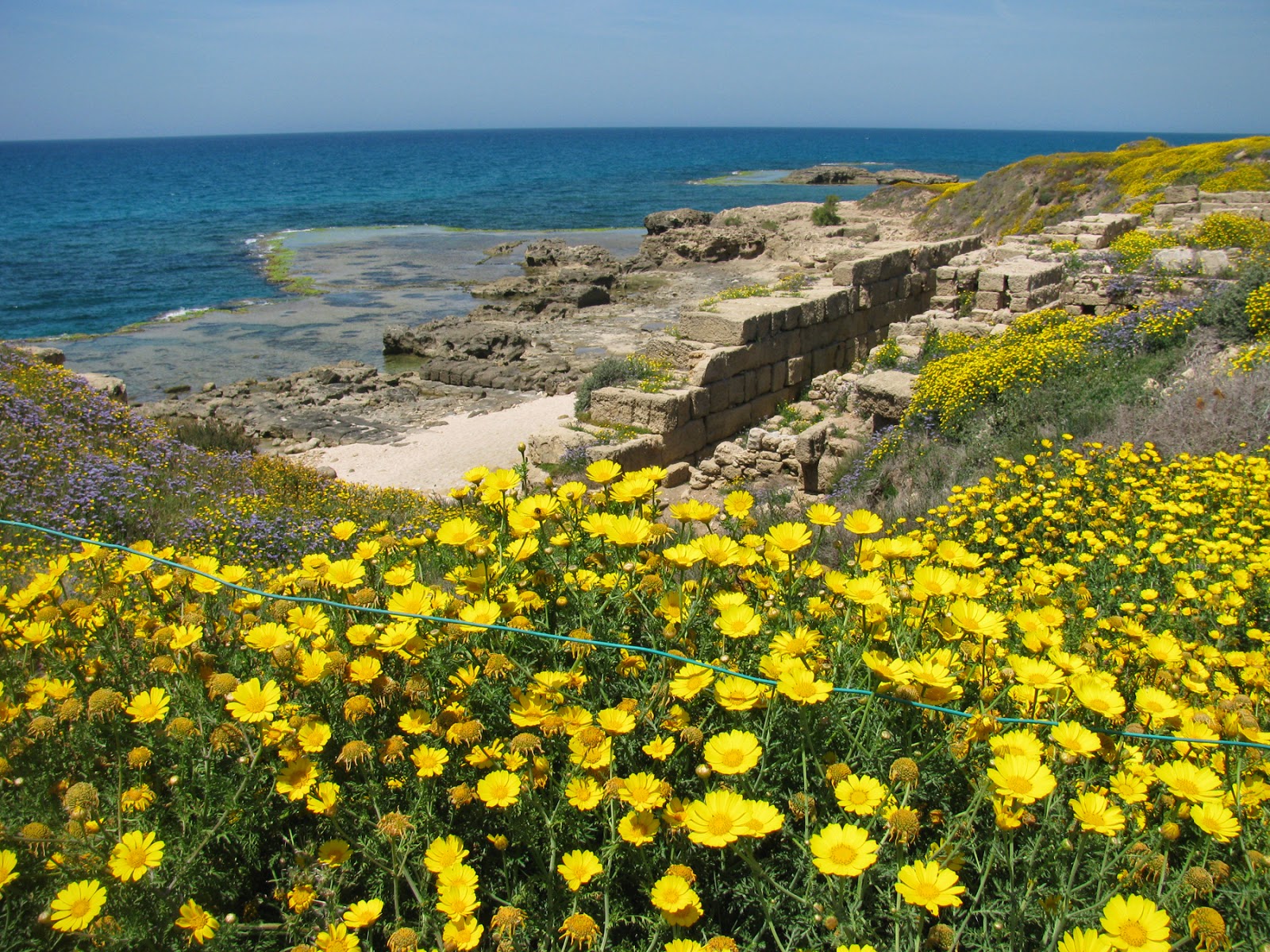 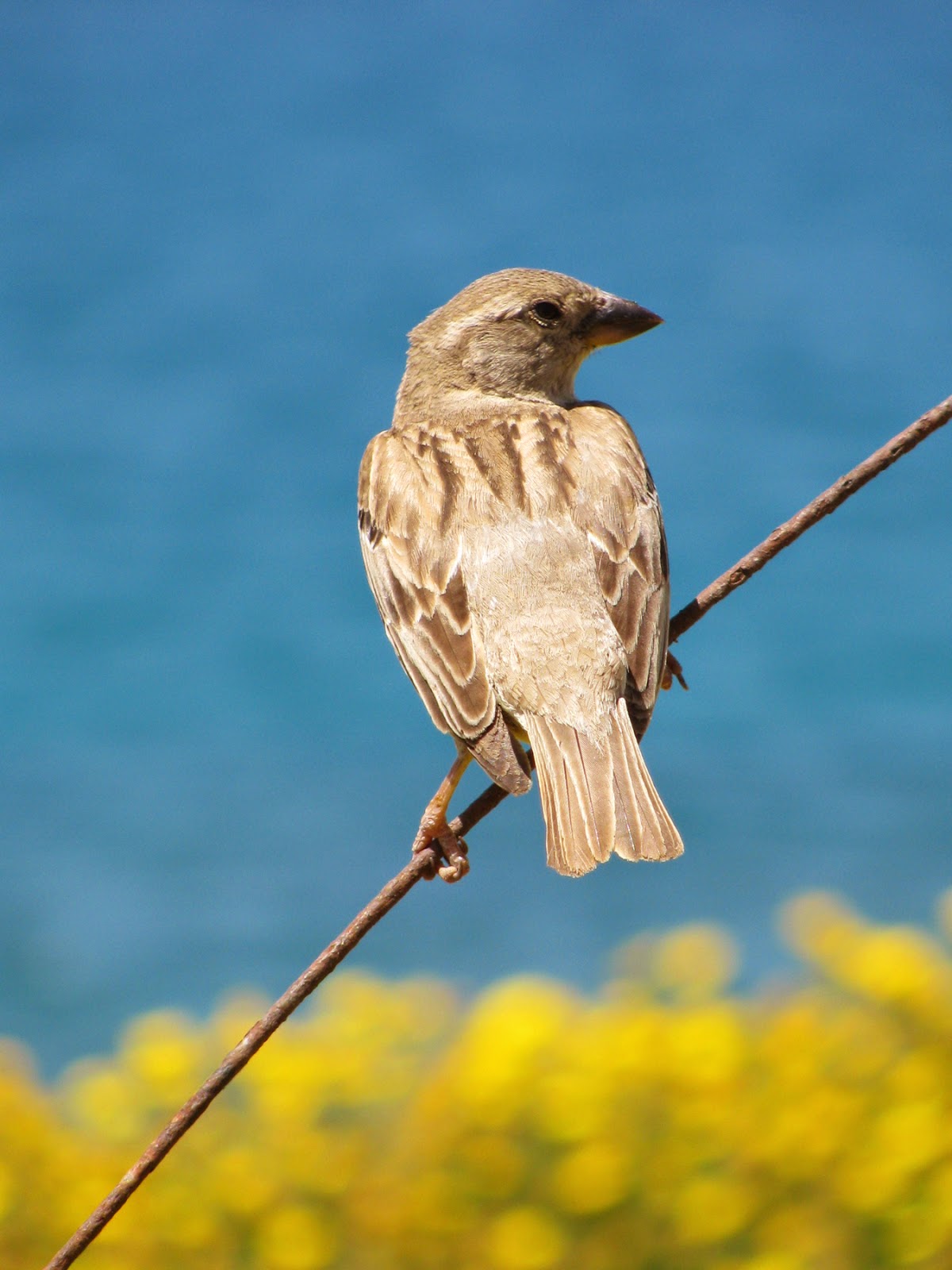 Dor is located in a beautiful area. To the north lie the Carmel range and the Carmel caves (our next point of call) and to the south stand the ruins of Caesarea, the seaport constructed by Herod the Great whose harbour was deeper and a better choice for a port and which eventually overshadowed Dor. The remains of the Arab village of Tantura lie a few hundred meters south of the archaeological site, as does the modern kibbutz and resort of Nahsholim.
The ancient city of Dor was built on a high mound jutting into the sea, with small bays bordering it on the north and south. These bays served as harbours as they were protected by a chain of islands acting as a natural breakwater. As we walked through the archaeological site we came across the hilltop remains of storehouses and public buildings, as well as the scattered remains of residential areas and a Roman aqueduct. In the thirteenth century A.D. a Crusader castle was built on the site and the remains of a Roman temple can also be seen. There are also fascinating rock cuttings in the bedrock near sea level and the kids, reluctant to stay dry so near to the beach, had a great time splashing in the rockpools and searching for shells to bring home.
Tekhelet, the blue dye once used in the clothing of the High Priest and on the tassels (tzitzit) of the tallit, was produced from a marine creature known as the chilazon. Diggers at Tel Dor have actually unearthed an ancient dye manufacturing installation for this product. 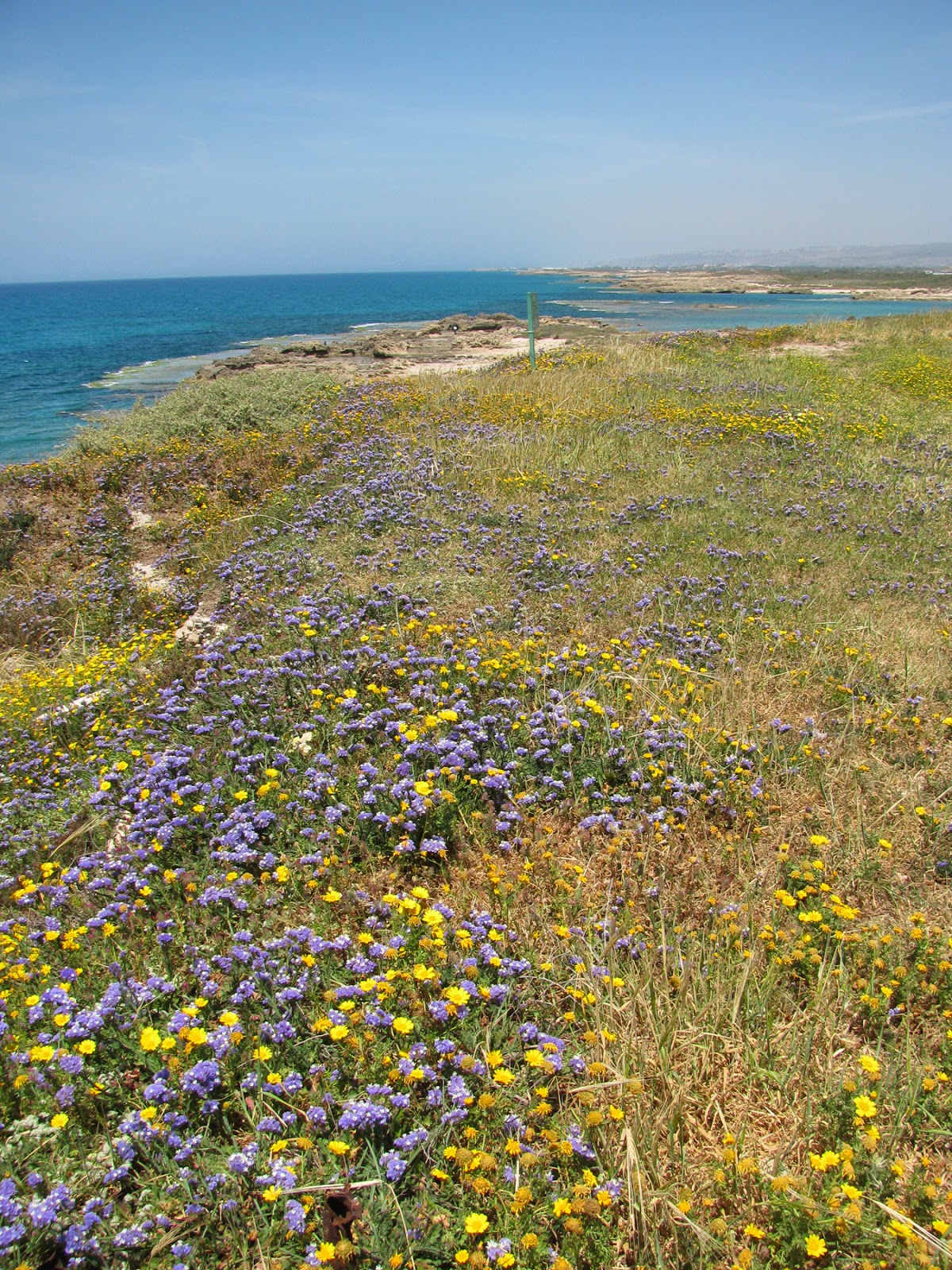 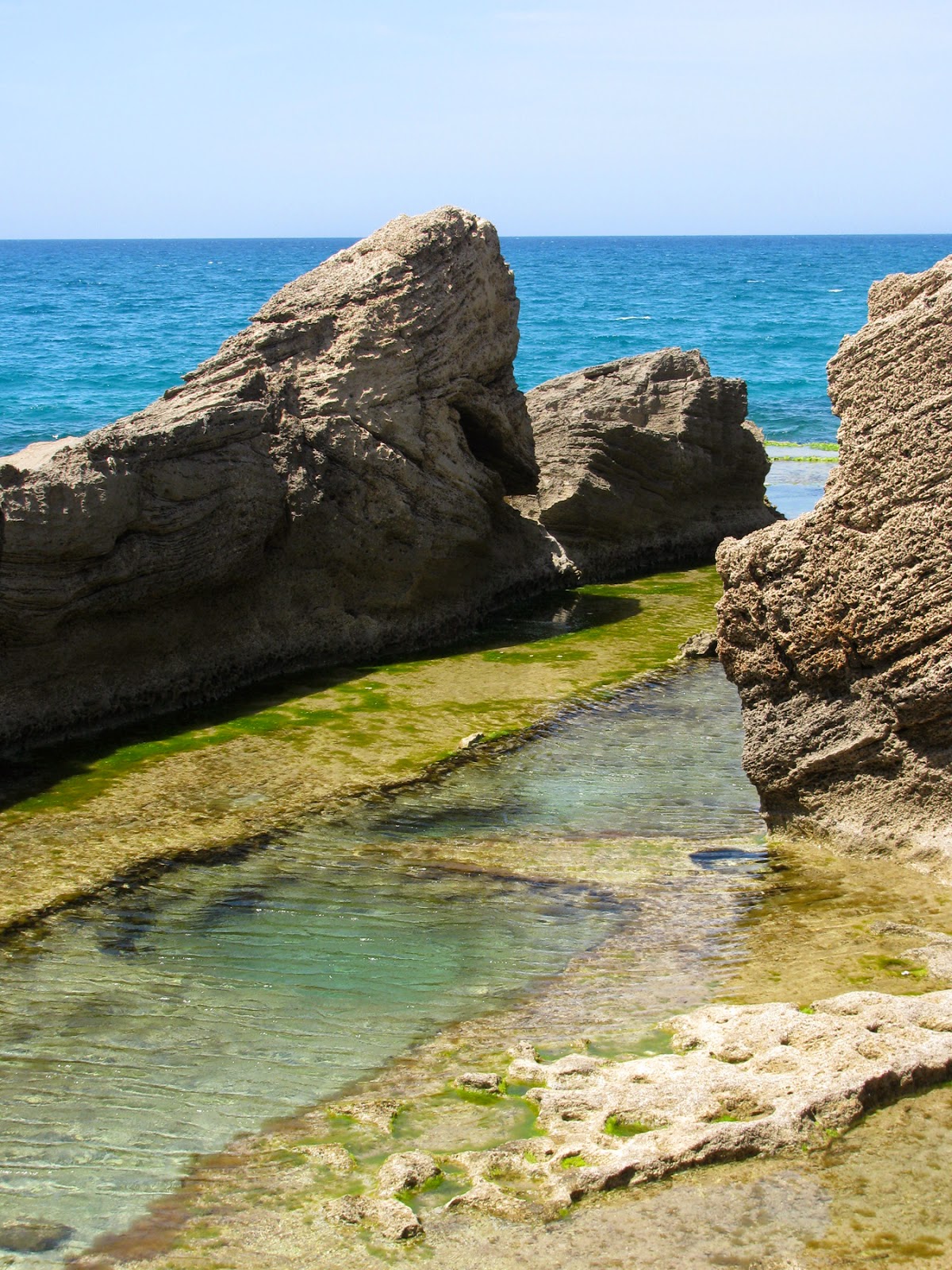 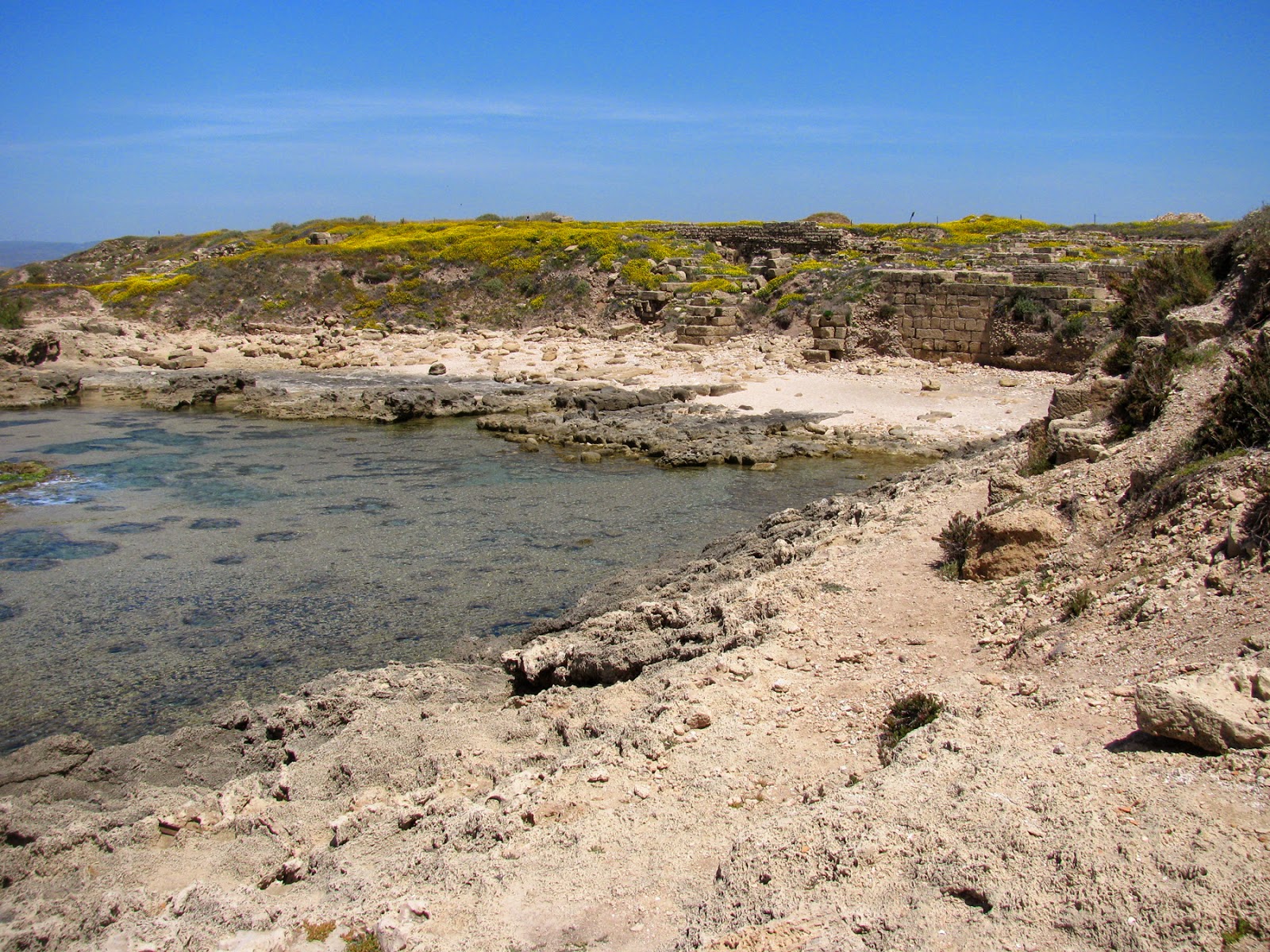 Tel Dor was first investigated in the 1920s by the British archaeologist John Garstang, on behalf of the British School of Archaeology in Jerusalem, and since then several excavations have, and are still currently being, undertaken. The fact that there is a gorgeous beach right next to the remains of an old Roman temple makes Tel Dor quite an exotic place to visit. It is the perfect place for a clifftop stroll with its incredible mix of beauty, history and nature. I've already promised the kids that we'll go back.
Posted by Handmade in Israel at 13:15 4 comments

Passover, the Festival of Unleavened Bread 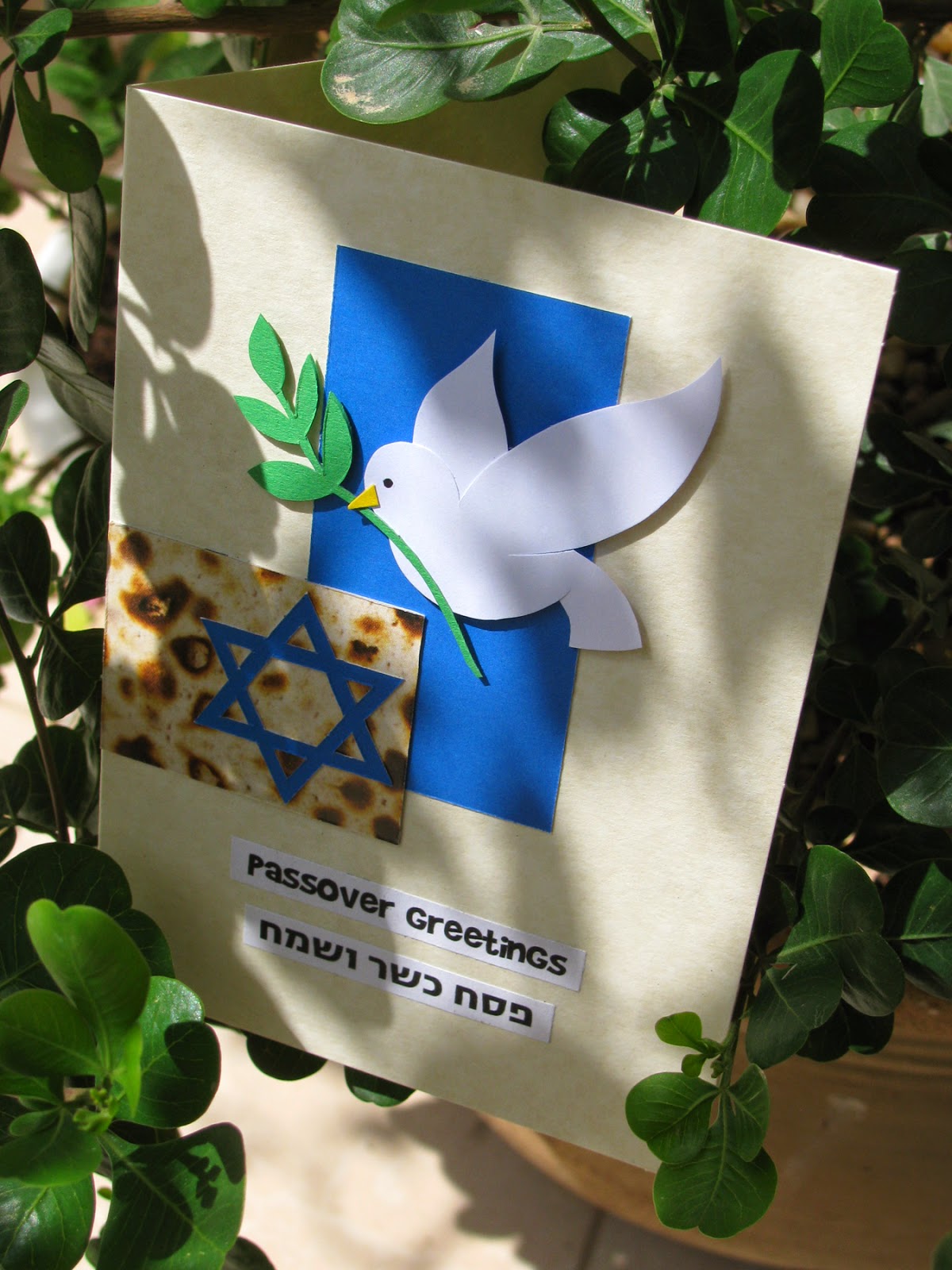 Passover, or the Festival of Unleavened Bread, is clearly approaching when I find myself spending almost every evening cleaning and sorting through my home, and every morning cutting out white doves and colourful Star of David's for my holiday cards! It is all drawing to a close now since Seder night will soon be upon us and then there is a week of Chol Hamoed, "weekdays [of] the festival", to be enjoyed. Grandpa has arrived from the UK and we are ready for some great days out together.
Passover, or Pesach as we call it, is all about the food! We clean our homes thoroughly to remove all crumbs of chametz (leaven) to remember the Jews leaving Egypt who did not have time to let their bread rise, and we eat only "Kosher for Passover". You can read more about it in two of my previous posts here and here. 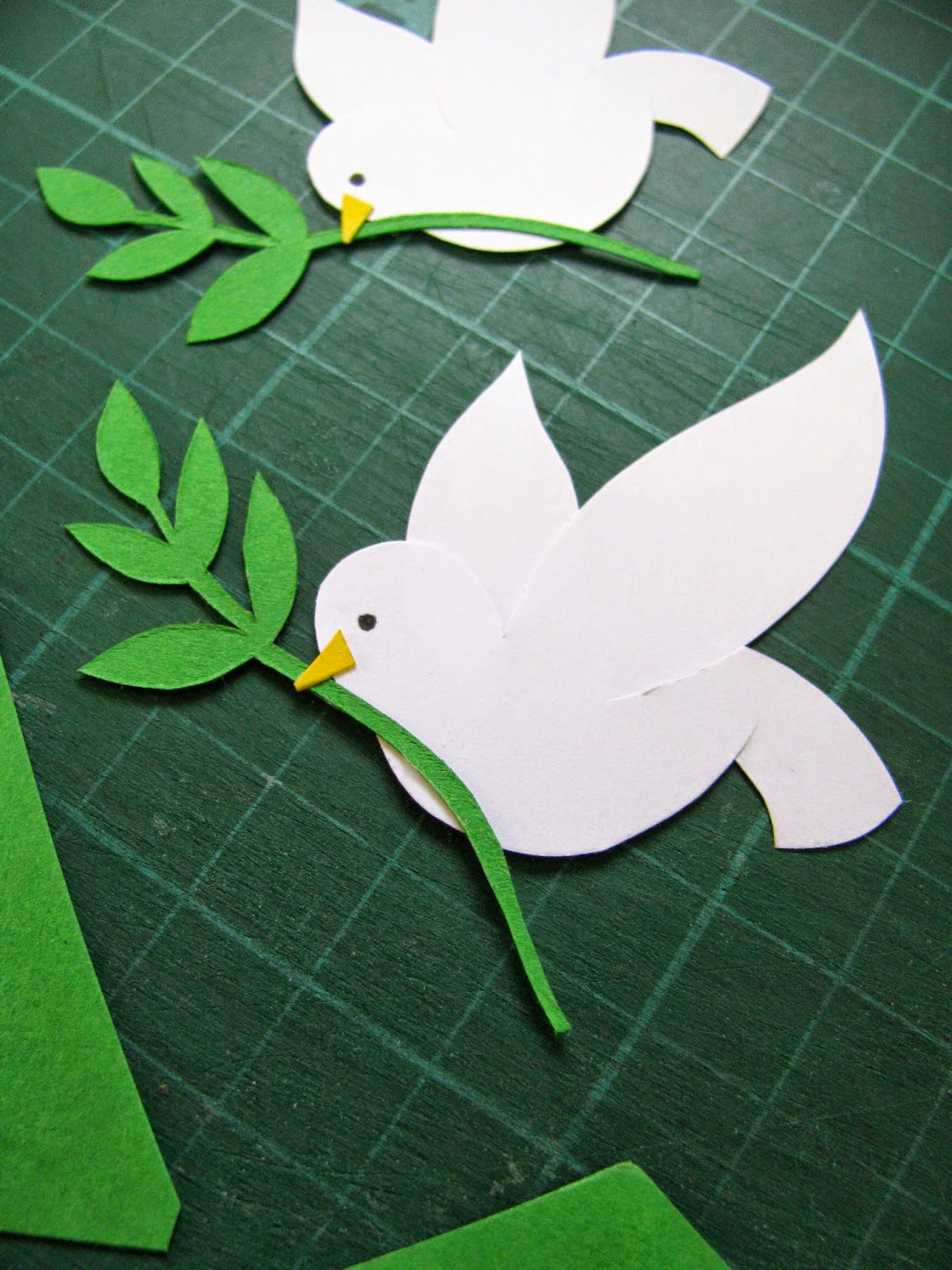 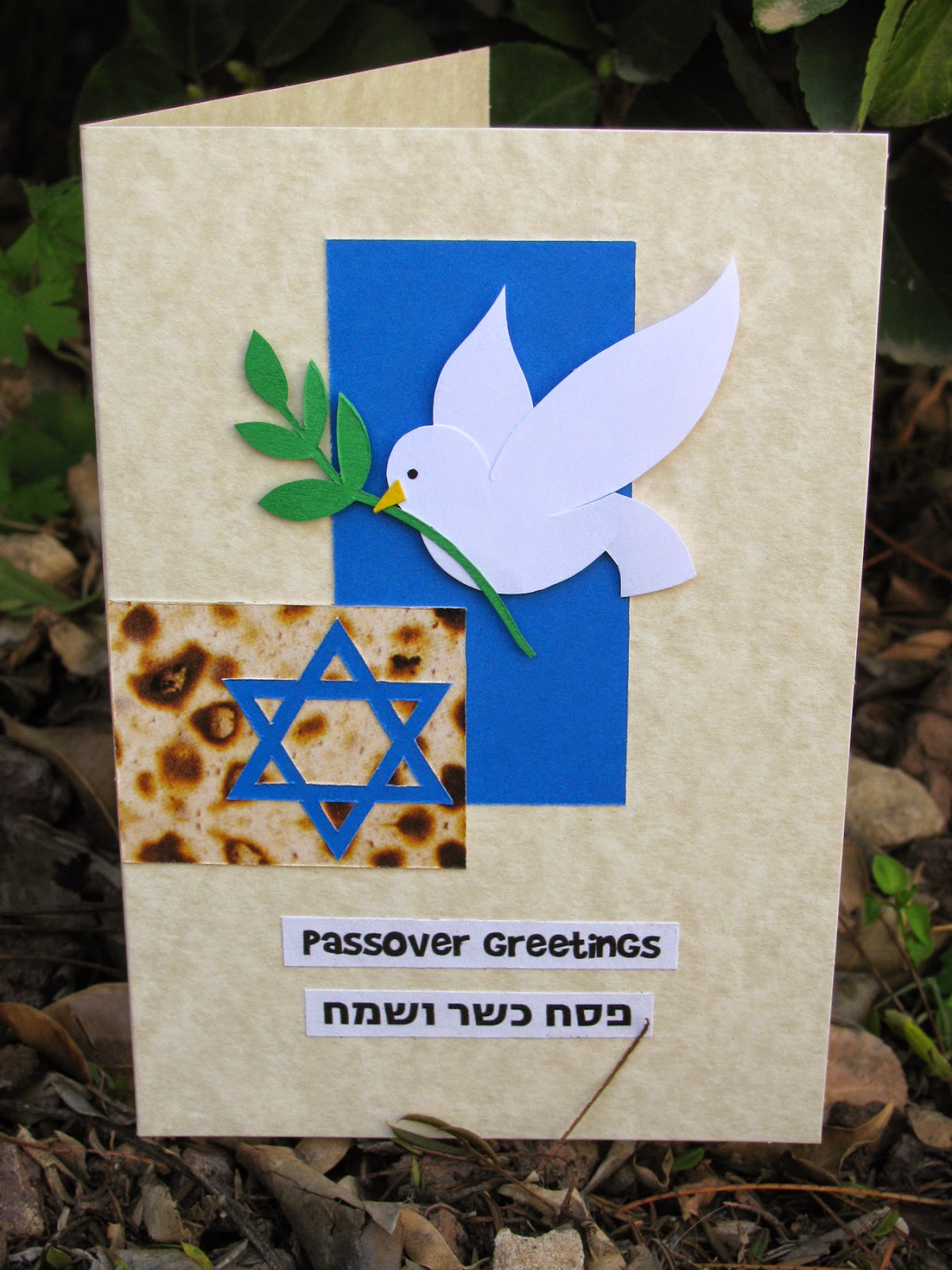 'Chag Pesach Sameach', a happy Passover festival, to those of you who mark the holiday. Enjoy this special week celebrating our freedom, and have a wonderful time with your friends, family and loved ones.
Posted by Handmade in Israel at 08:30 2 comments 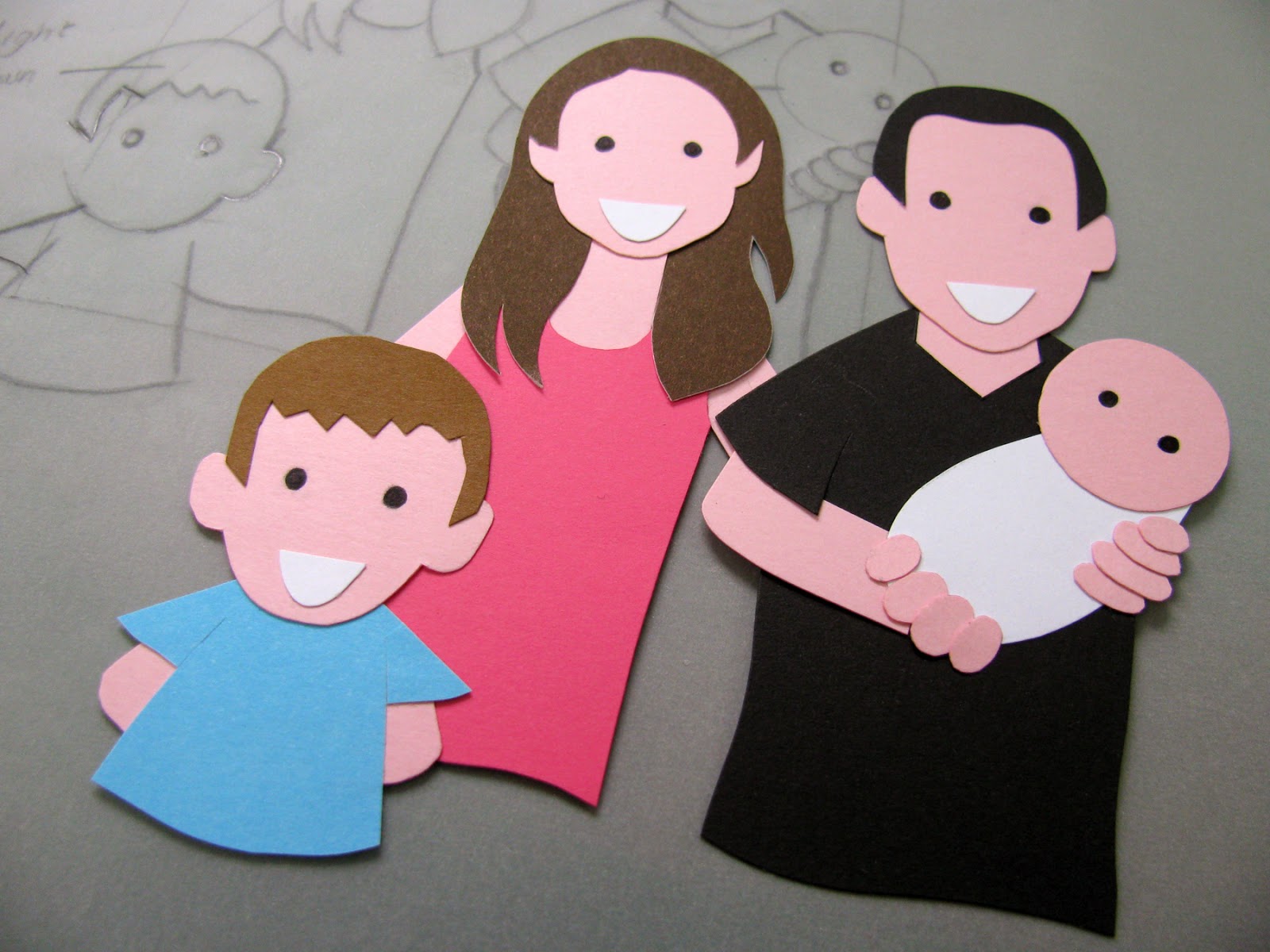 My lovely friend who requests cards for everyone in her family recently emailed me to tell me that her brother's family had grown. She needed a card for a brand new nephew and asked if I could show the whole family on it. My usual request for a family snap was promptly answered and I soon set to work drawing out the family group. 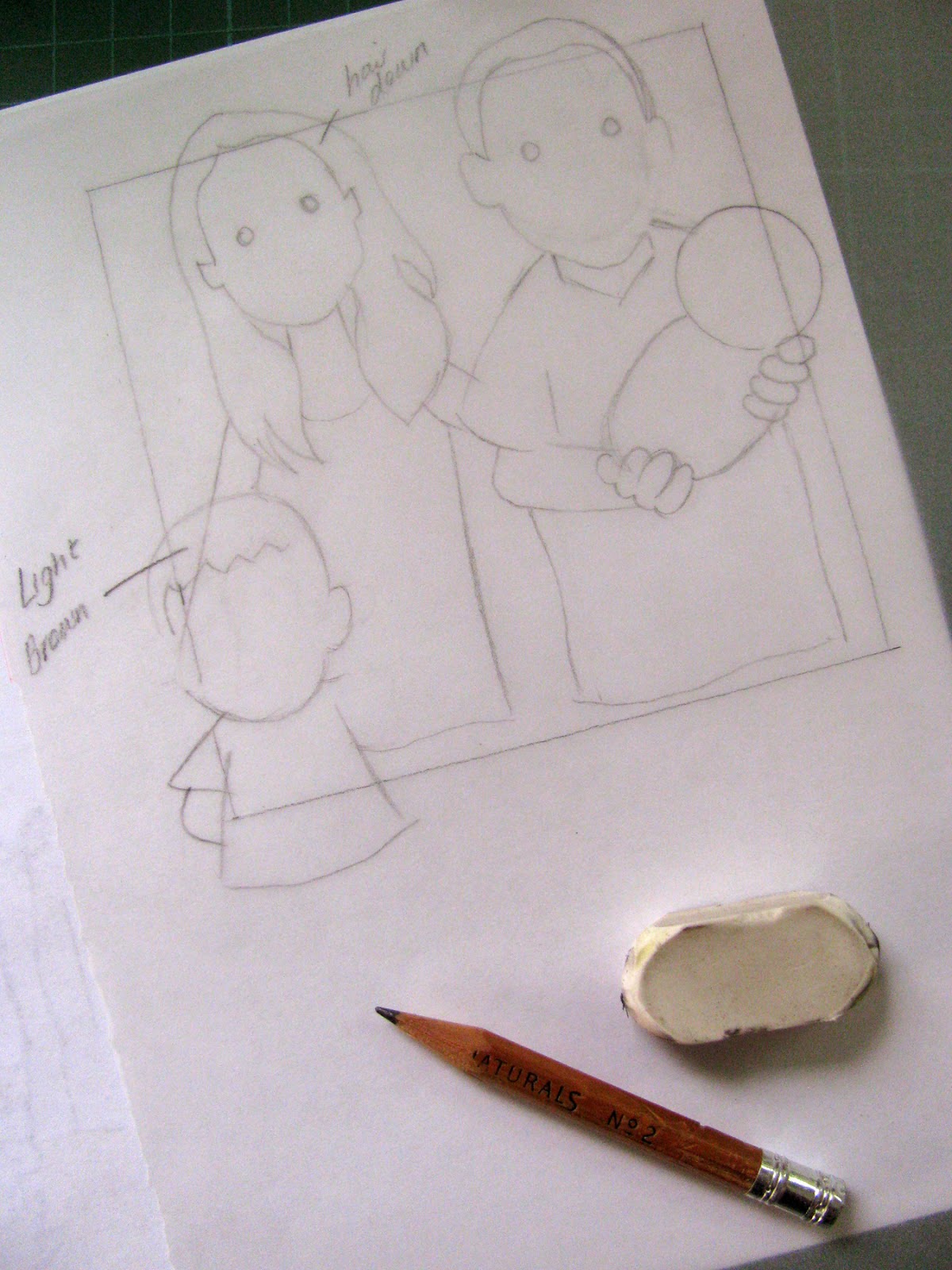 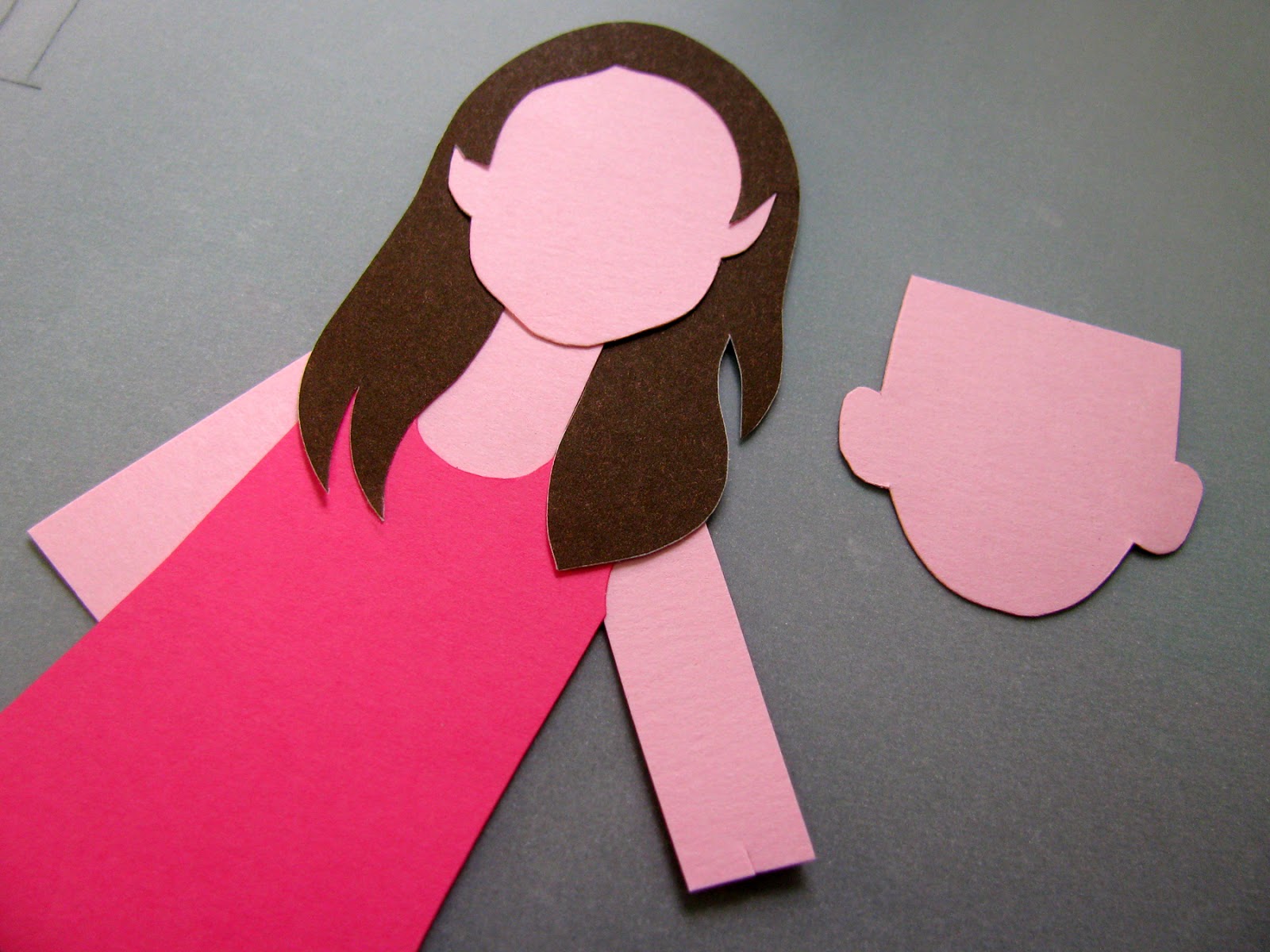 The proud big brother stands at the front of the group, whilst Mum and Dad, with their new son in Dad's arms, huddle together in the background. Once the family group was complete, I created some baby boy symbols - a bottle, pram and some little blue bootees - for the background. Gideon's name was added a week later after he had had his Brit Milah, the Jewish religious male circumcision ceremony. 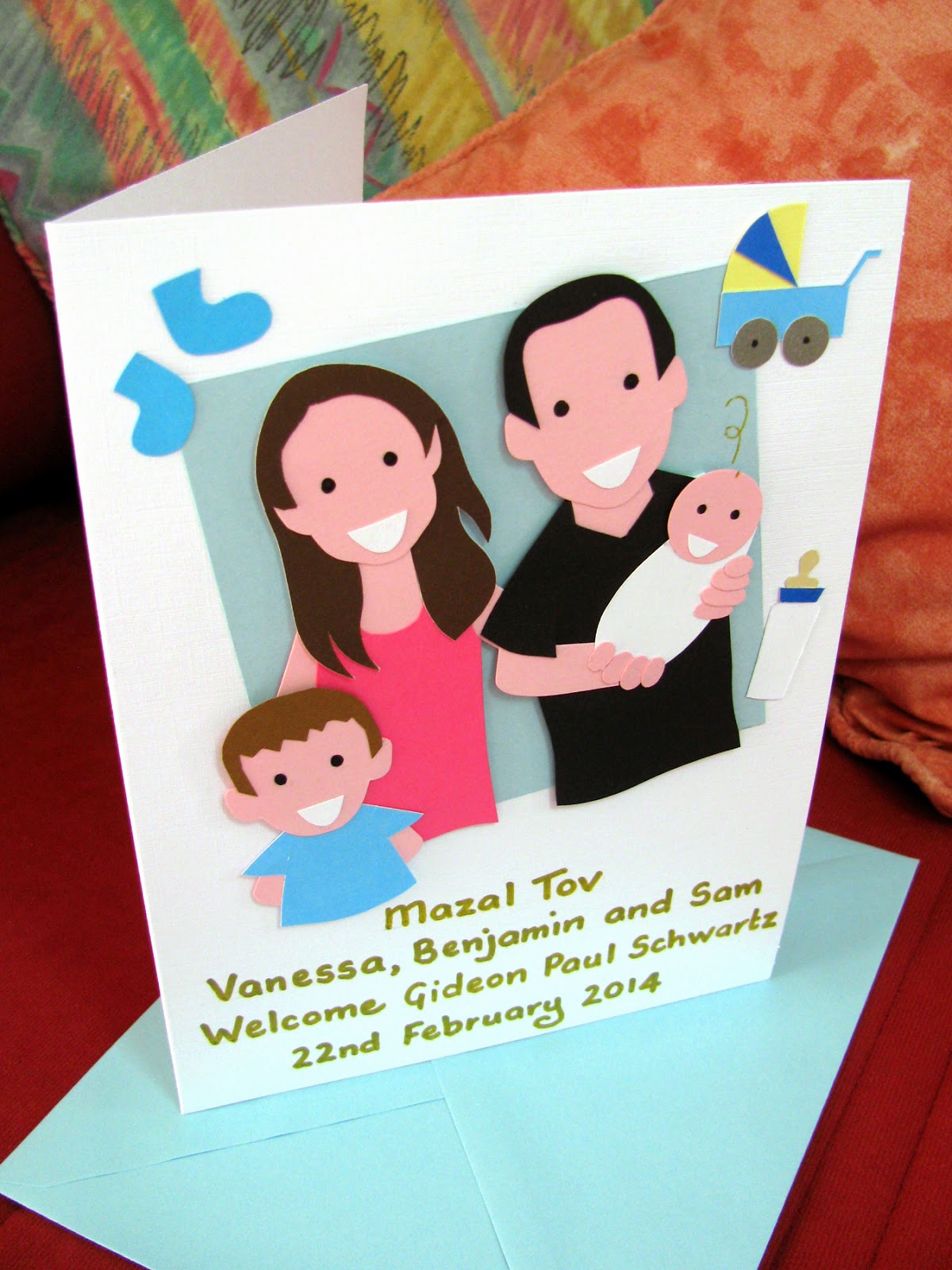 I thought it would be interesting to show you how my cards come together, from the initial sketch to the final card. Most of my figures do have all their body parts, but in this case Mum's arms were behind Dad's back, so she didn't need any!
Posted by Handmade in Israel at 08:30 1 comments

Spring is in the Air 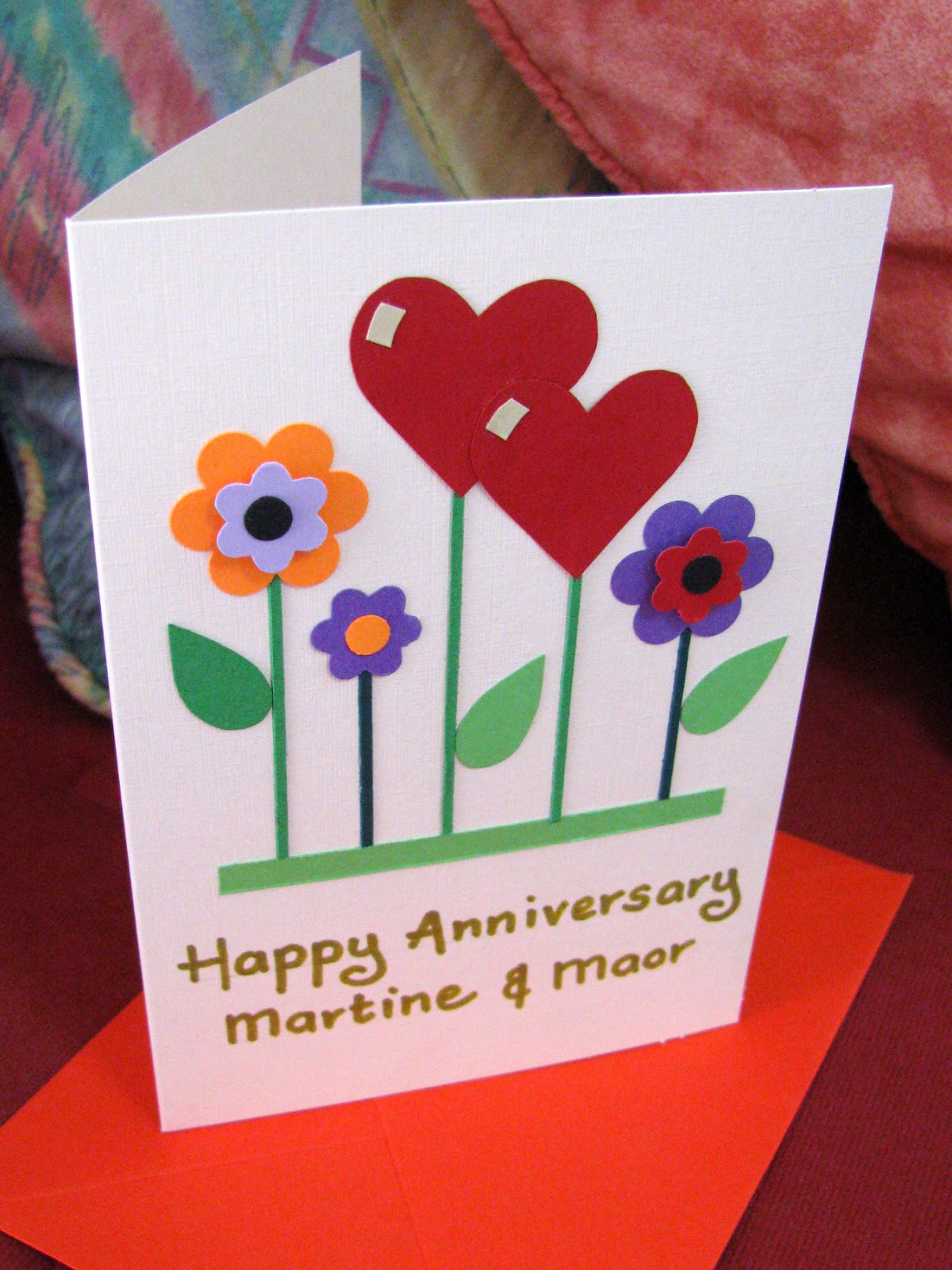 The beautiful anemones which we saw in the south clearly had an effect me. I have often added flowers to my cards but when I was asked to make an anniversary card for a couple who have received my cards many times before, I needed to come up with something new. There was definitely something of the kalaniot - the anemones - on this card. And I liked it so much, I made it again, the second time around in different colours. 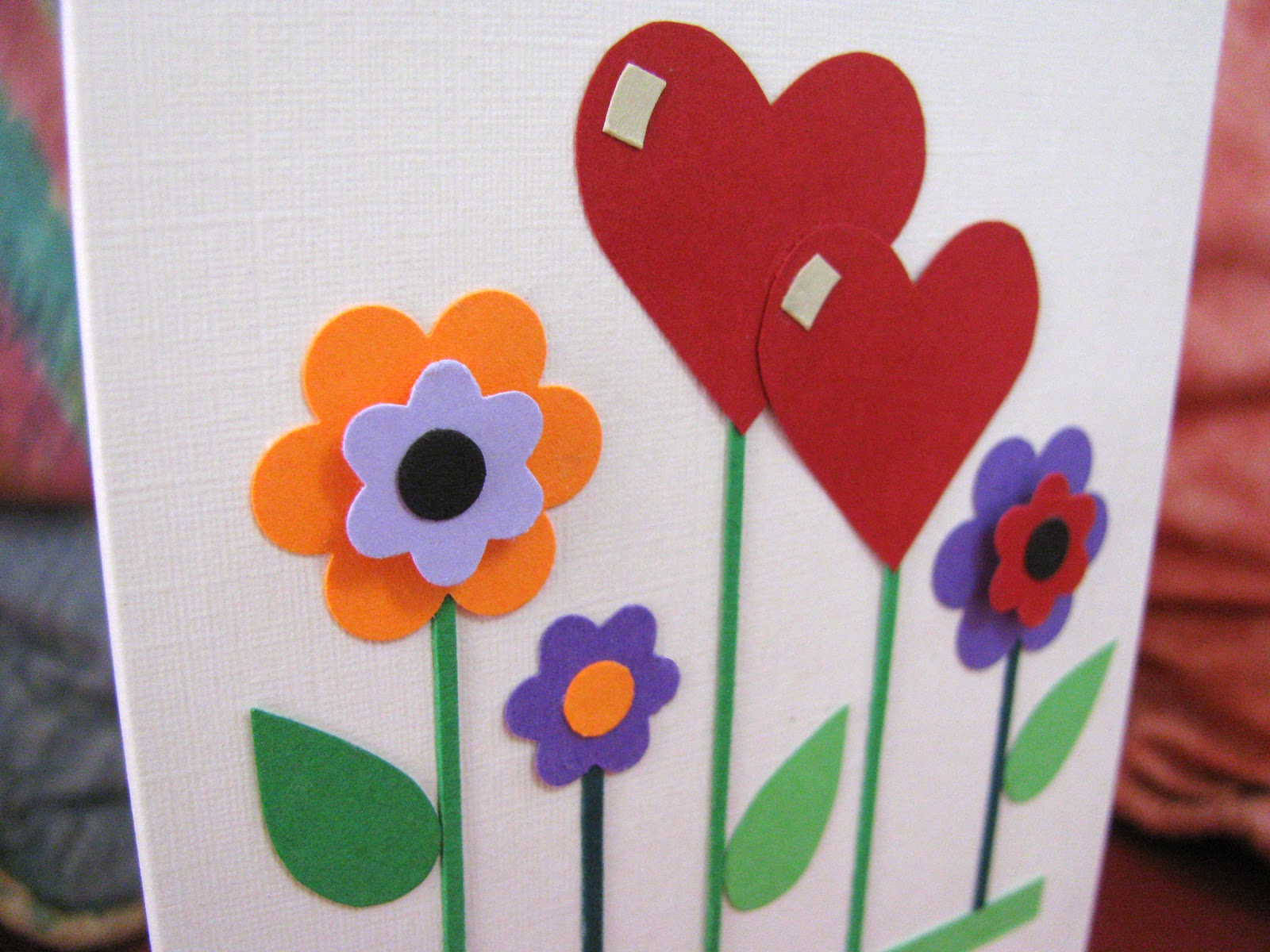 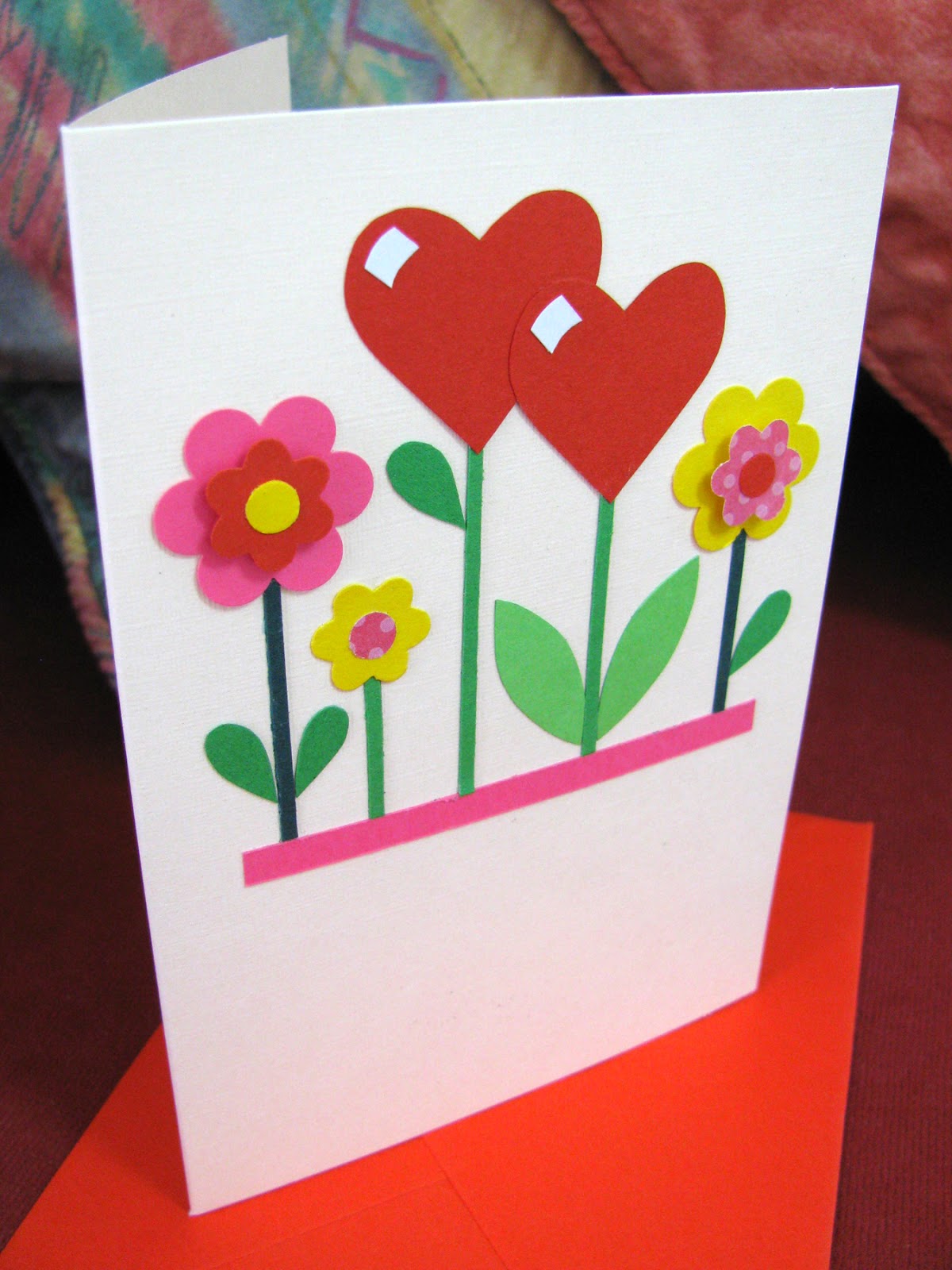 Flowers may pop up pretty regularly on my cards, but so do birds. This little bird has sort of become my "logo". You can see her - yes, she's definitely a female - here, here and here.
Spring is in the air! 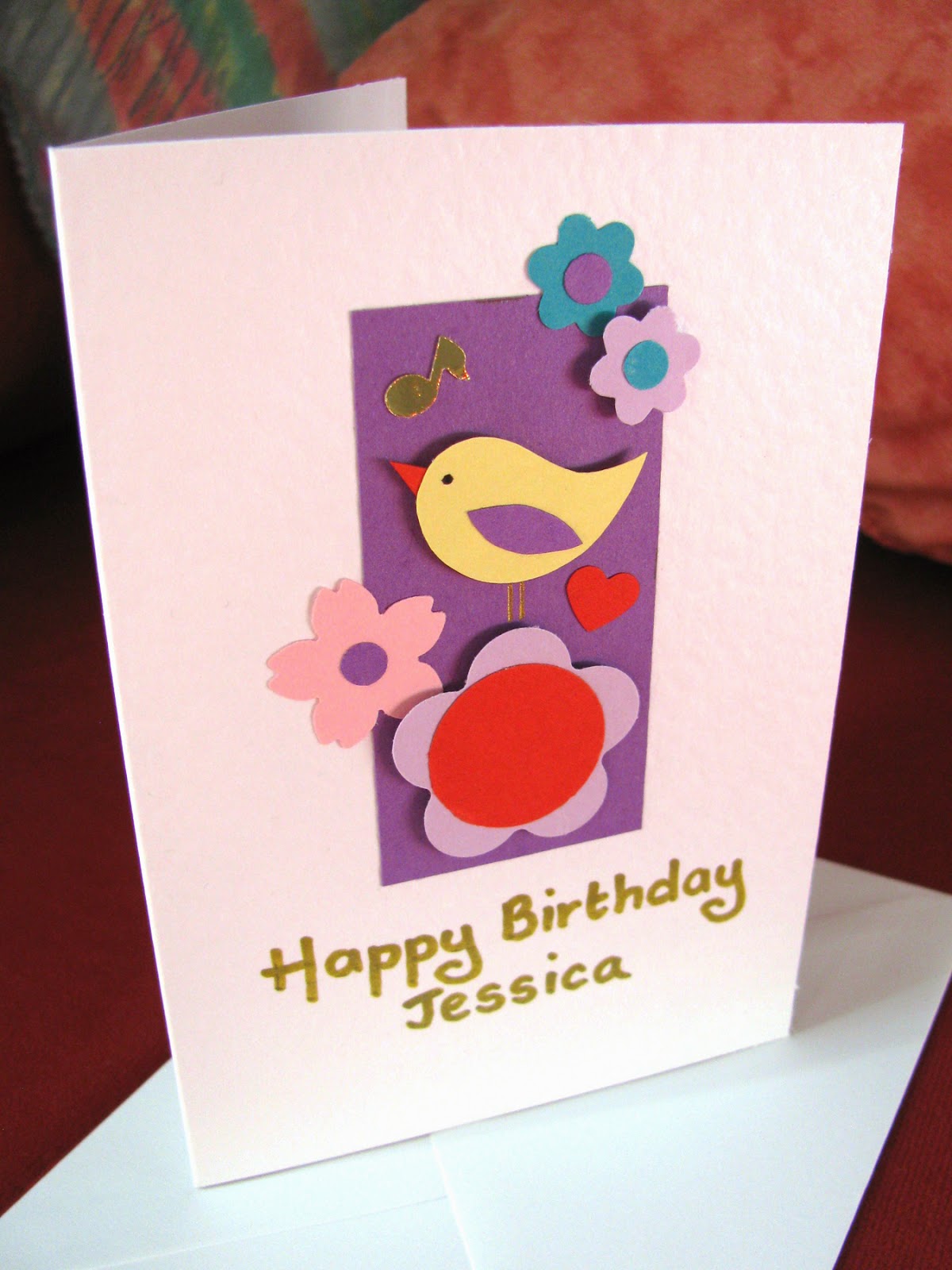 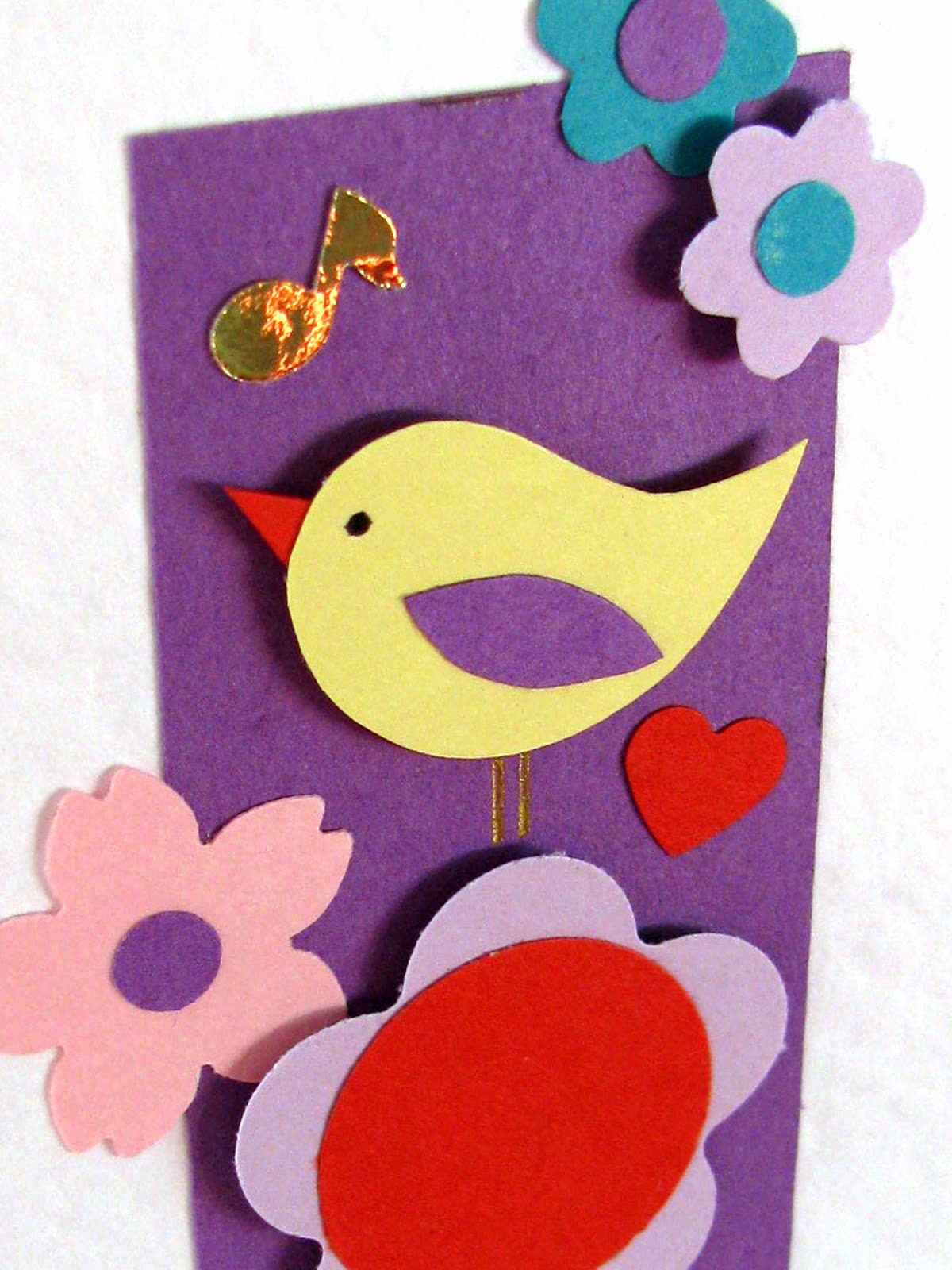 Posted by Handmade in Israel at 09:00 1 comments