The Mighty Whites and more 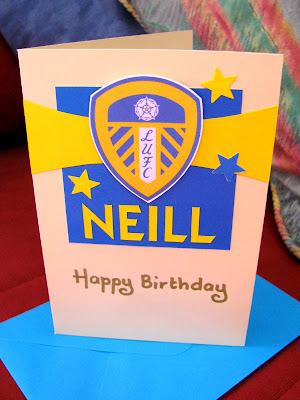 So the 2014–15 Premier League season is over and Hull City, my family's favourite football team, have been relegated back to the Championship after two seasons in the Premier League. In the last two years they have played at Wembley in the 2014 FA Cup Final, and in Europe for the first time ever, but yesterday saw the ultimate low and next season they will once again be playing Yorkshire rivals Leeds United, The Mighty Whites, in a lower league.

Neill, above, might well be happy about it. His Mum tells me that he is a die-hard Leeds United fan, so the club's badge, which features the White Rose of York, and their traditional colours of blue, gold and white, just had to feature on his birthday card. 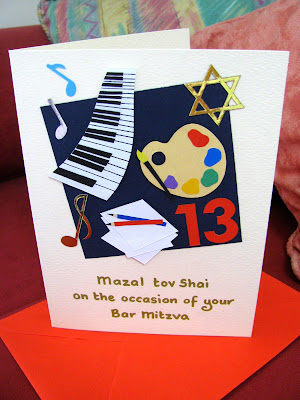 Shai recently celebrated his Bar Mitzvah. My customer told me that he likes to draw and that he also plays the piano. I carefully crafted a piano keyboard and some music notes for his customised card, and added a paint palette and some pencils and paper. A gold Magen David, or Star of David, and the number 13 (the age that a Jewish boy automatically becomes a Bar Mitzvah) add a little Jewish content. 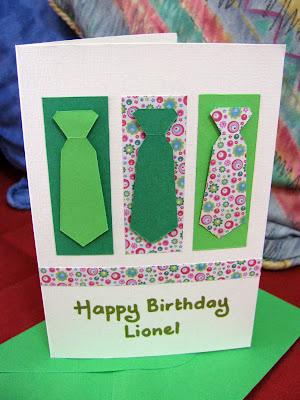 Finally, this tie design is an old favourite but on this occasion I gave it a funky edge with some rather Seventies-inspired floral paper. I think it made for a fun card but, hopefully, one with a masculine edge to it too.
Posted by Handmade in Israel at 19:10 3 comments 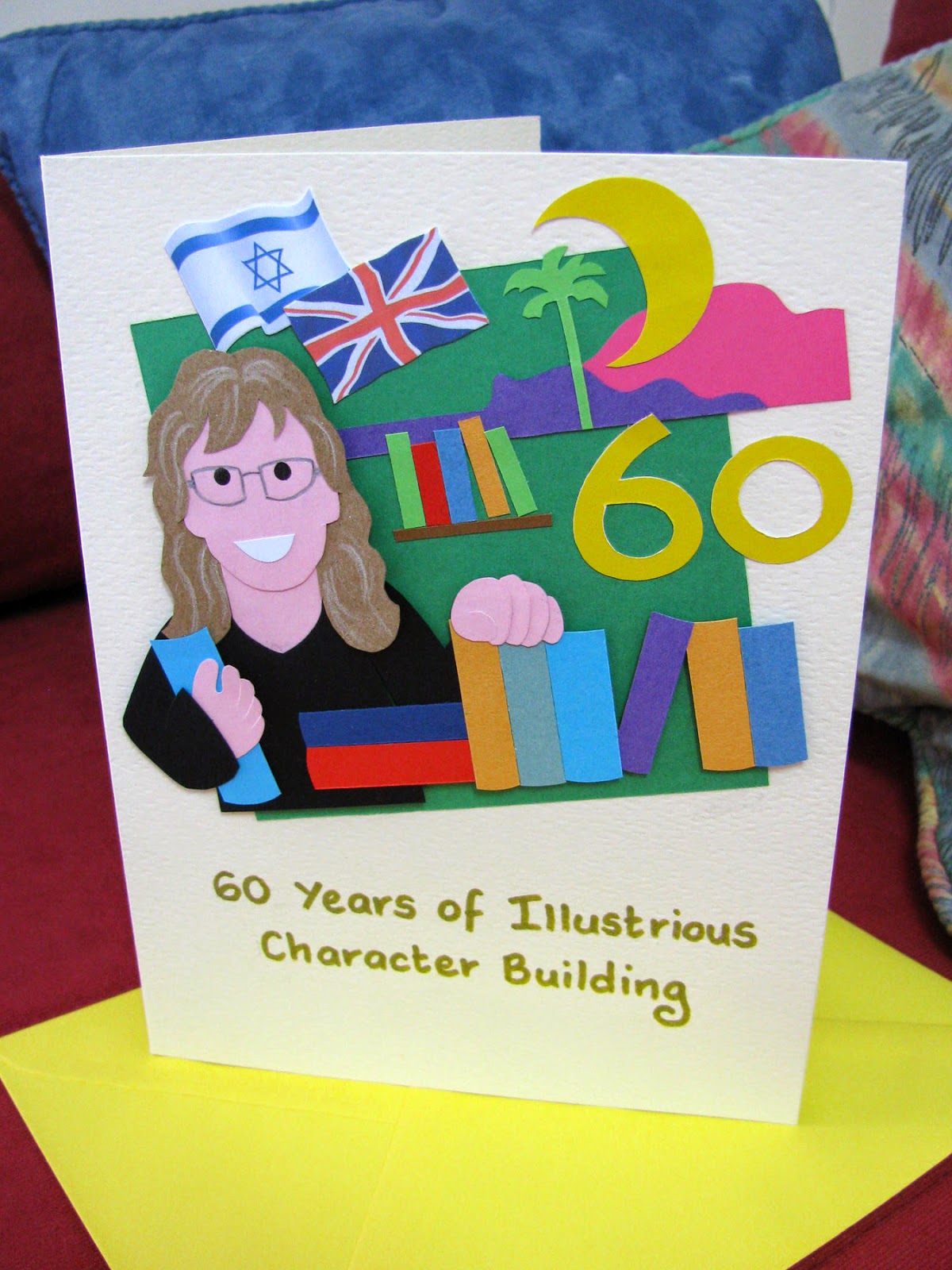 A new customer asked me to create a customised card for her very special sister who was celebrating her 60th birthday. Her sister, she told me, was born in London and made aliyah (in Hebrew "ascent" or "going up"; the immigration of Jews to Israel) where she joined a kibbutz near Eilat, the resort city on the southernmost tip of Israel. She is now the regional librarian for the Eilot region, where she encourages reading and teaches the information sciences in the library. According to her sister, the birthday girl puts her heart and soul into all her enterprises. She wants library books to be read and, to achieve this, has put on drama presentations at library conferences, in other kibbutzim, and at regional council activities, on one occasion dressing up as a cook and, another time, pretending to be Queen Elizabeth II. She encourages the kids to find information and to appreciate books in all spheres - both fiction and reference. As her sister puts it, "She's on a mission..."
Books clearly had to feature predominantly on the birthday card. I have shown the birthday girl surrounded by books, with desert hills, a palm tree and a big crescent shaped moon - the logo of her Kibbutz - in the background. A Union Jack and the flag of Israel, representing her place of birth and the country which she has adopted as her own, are gently waving in the breeze.
When my customer received this card amongst a selection of others, she wrote to tell me that she thought it "brilliant." "Thank you, Lisa, so much." she wrote, "It's perfect. One very satisfied customer." She later told me that her sister "LOVED LOVED LOVED the card."
I like a happy customer. 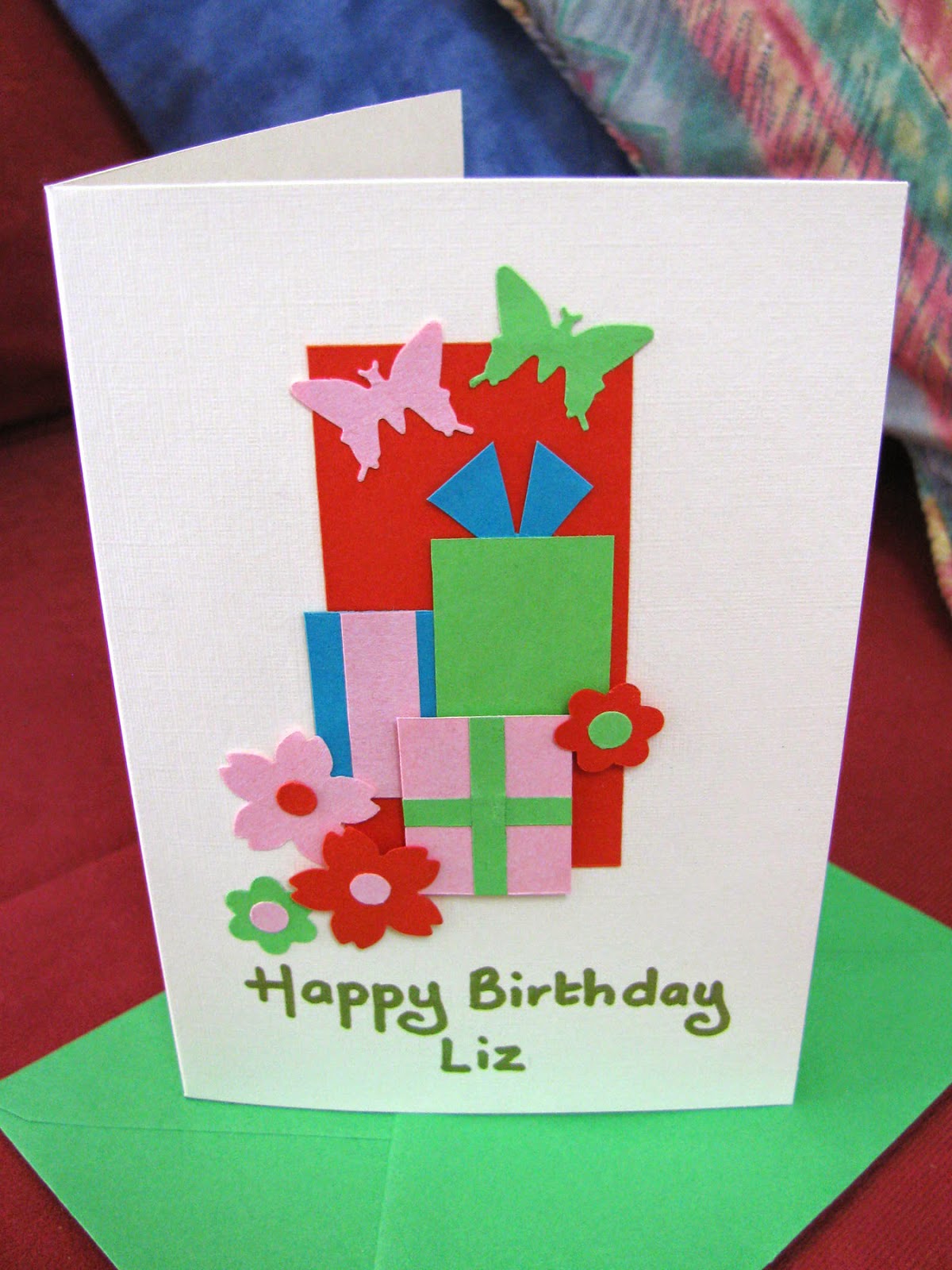 There is less of a tale behind these cards, but hopefully they were appreciated just the same. Another customer asked me to create something pretty for a good friend, and a special 60th birthday card for her daughter-in-law. Flowers and presents always fit the bill. 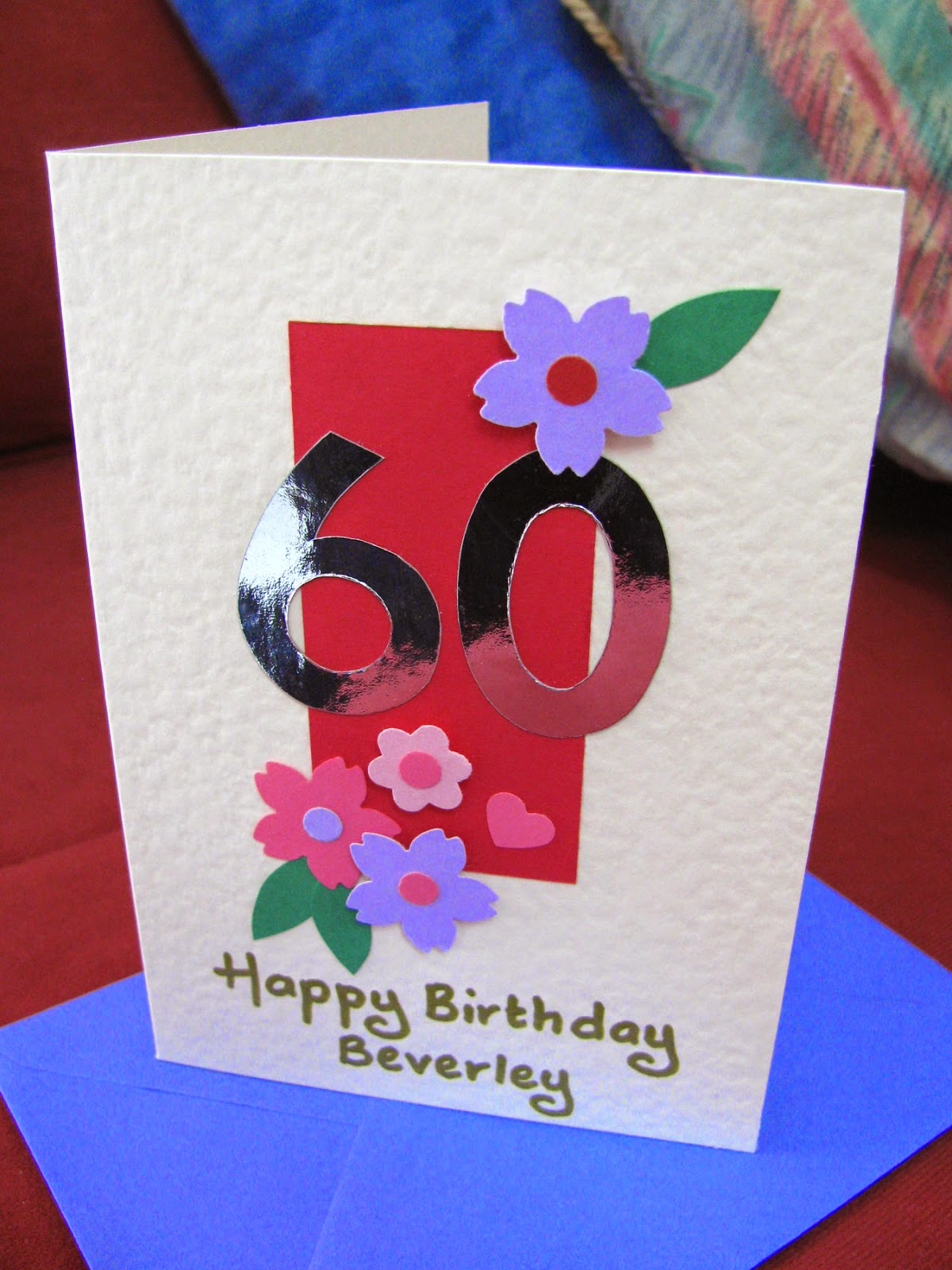 Posted by Handmade in Israel at 10:44 2 comments 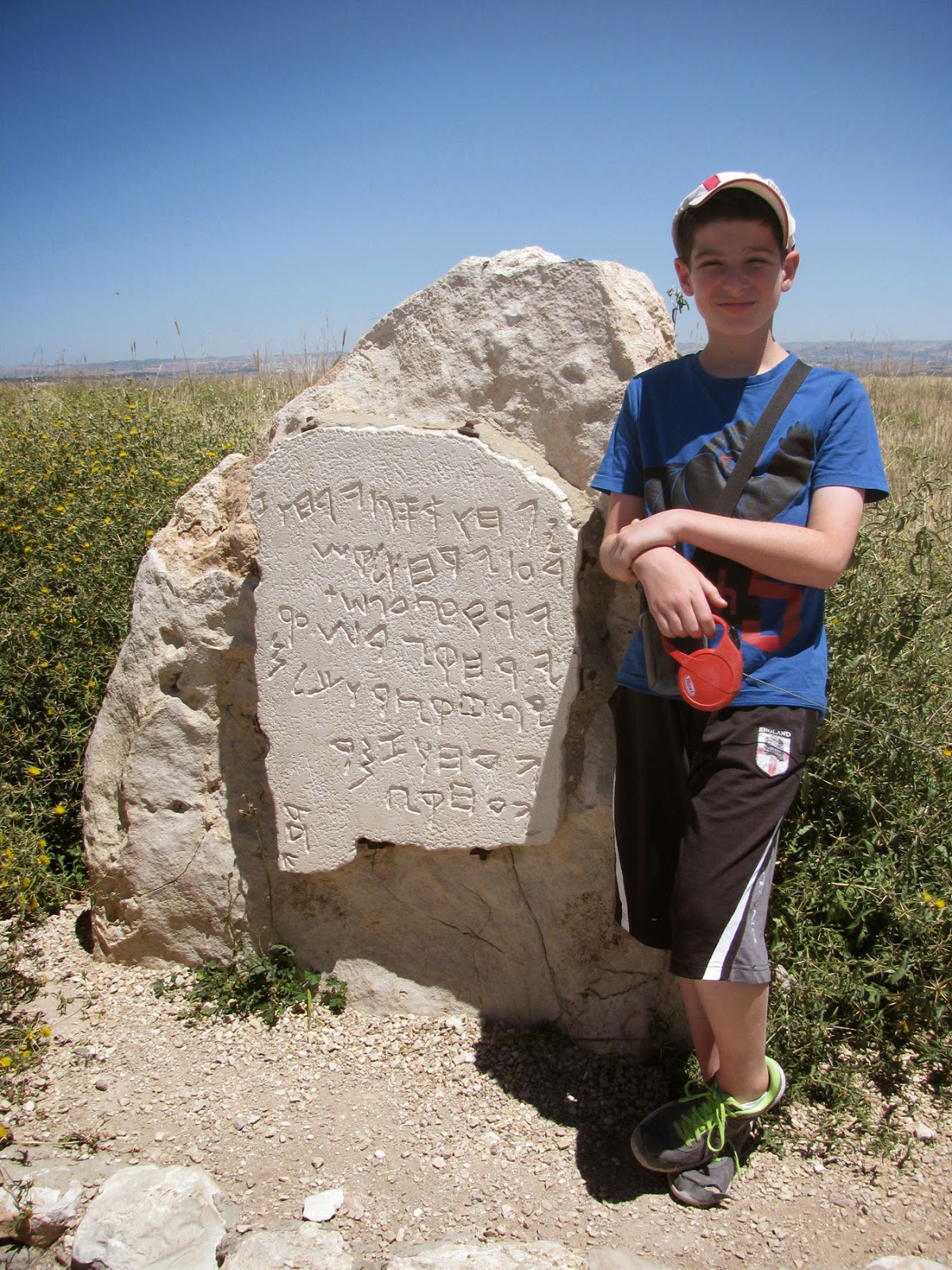 Tel Gezer National Park, located half way between Tel Aviv and Jerusalem, in the foothills of the Jerusalem Hills, houses some impressive archaeological ruins. Gezer was one of the most important sites at the crossroads of the Via Maris (Latin for "Way of the Sea"), an ancient trade route dating from the early Bronze Age. The Via Maris linked Egypt with the northern empires of Syria, Anatolia and Mesopotamia (modern day Iran, Iraq, Israel, Turkey and Syria), and the road to Jerusalem and Jericho, both important trade routes along the Mediterranean. There were strong commercial connections between Gezer and Egypt and pictures of the ancient city have been found in both Egypt and Mesopotamia (Iraq).
Gezer was built, destroyed, and rebuilt over thousands of years and 25 layers of settlement have been found there. In the beginning of the 20th century the "Gezer Calendar" - a 10th century BCE inscription on a small limestone tablet - was found there. It is considered the oldest ancient Hebrew document so far discovered and is today displayed in a museum in Istanbul, Turkey. There is a replica of the tablet at the entrance to the site, above. (Just to make clear, the "replica" is the stone and not my youngest son!) 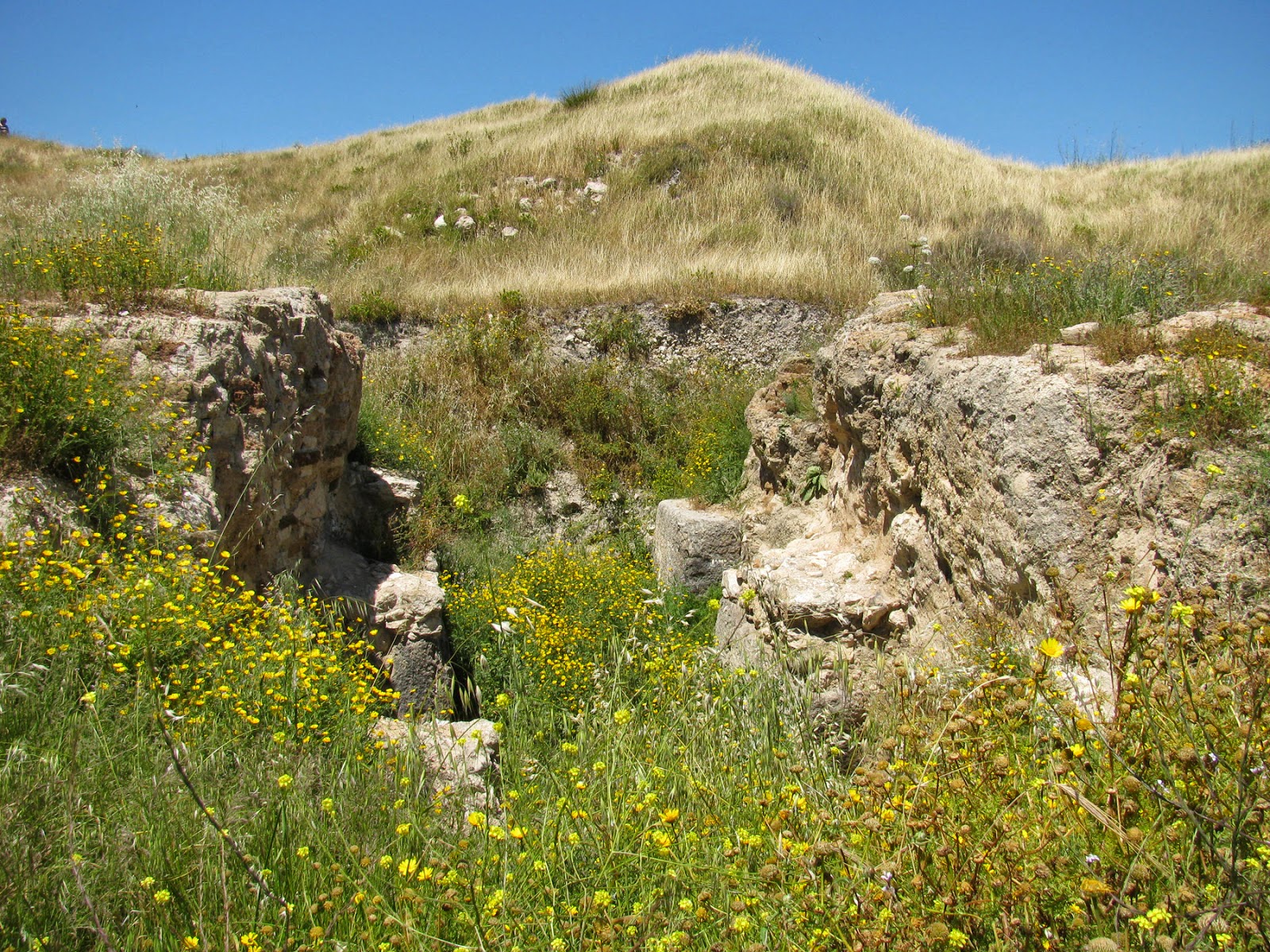 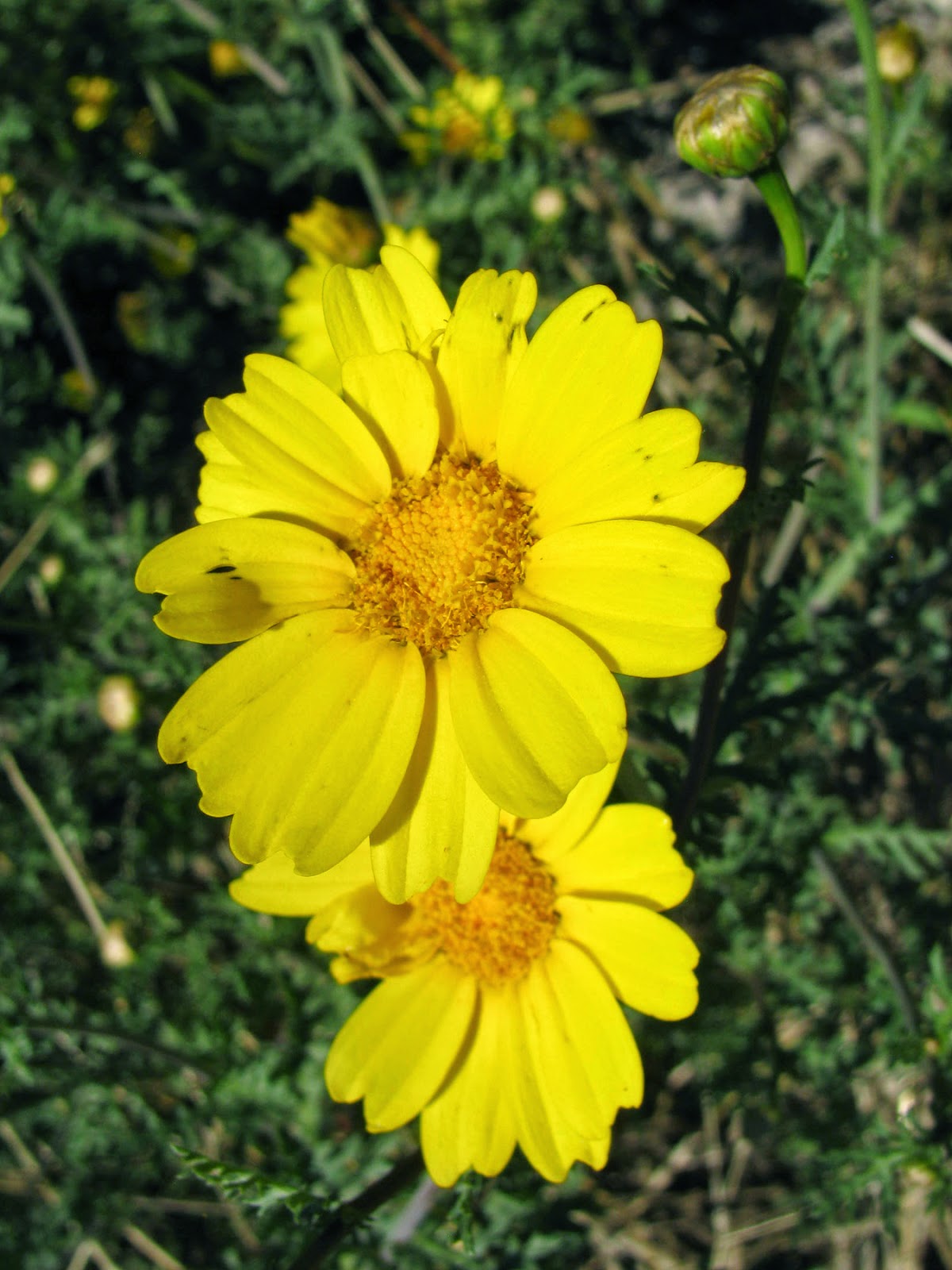 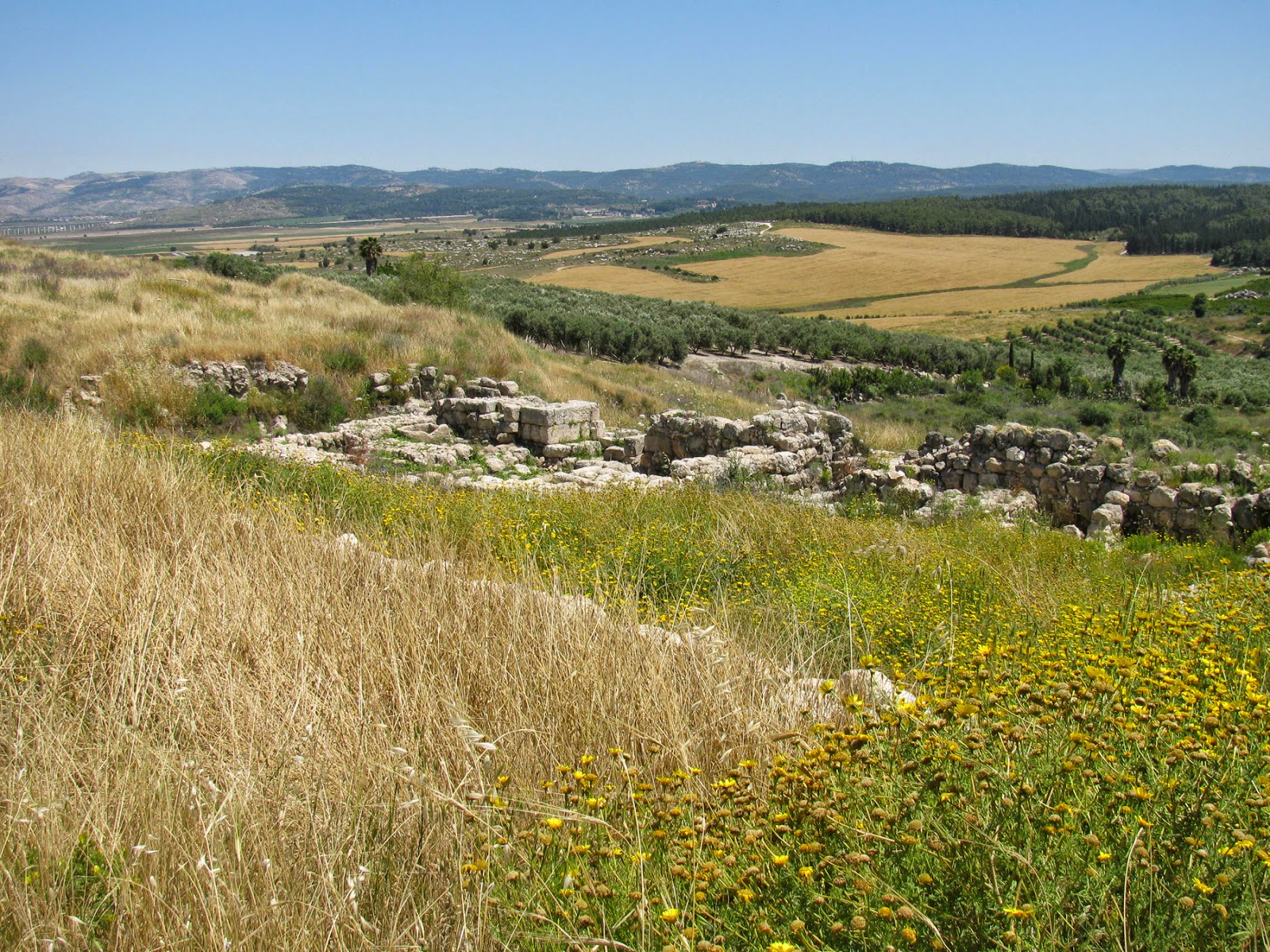 All around Tel Gezer there are remnants from the Middle Bronze Age and the Canaanites. We followed green trail markings and took a circular route around the park where we saw the remains of an ancient water-system with a deep water shaft, the original bricks from the gate that surrounded the Canaanite city, as well as a beautiful gateway lined by three guard rooms from the time of King Solomon, above and below, (according to the Old Testament, Gezer was rebuilt and fortified by Solomon). There is also the destroyed tombstone of a 16th century sheikh, and a shrine area including one stone basin and 10 monoliths, or Standing Stones, each different from the other in size and shape.
The park is large - just over 32 acres - though only small parts of it have been excavated. The views from the top of the tel, or mound, which rises to the height of 210 metres above sea level, are breathtaking. The day we visited we could see Tel Aviv, Ashkelon, Ashdod and Modi’in very clearly, so it is easy to see why Gezer assumed such importance because of the strategic position it held. 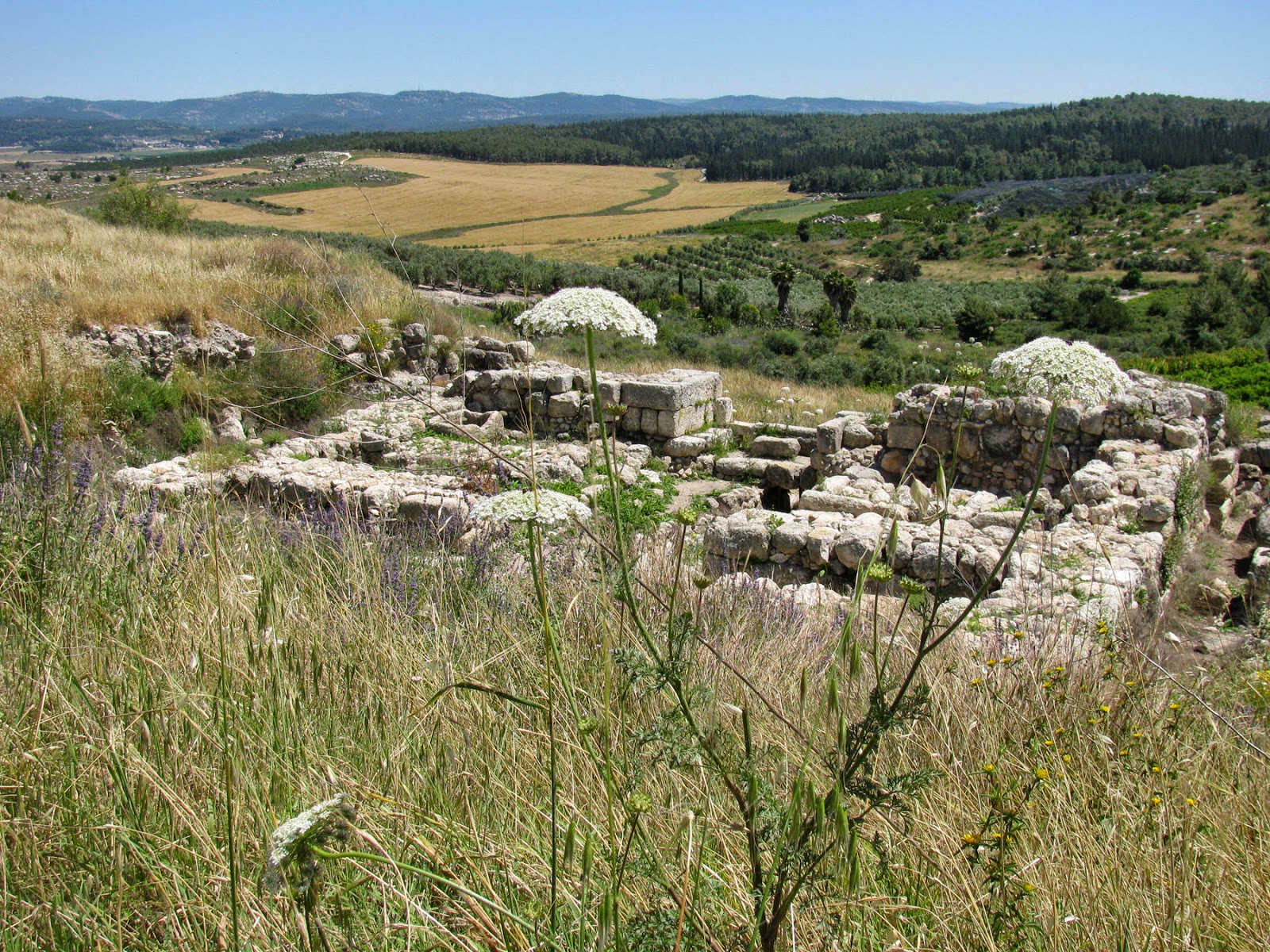 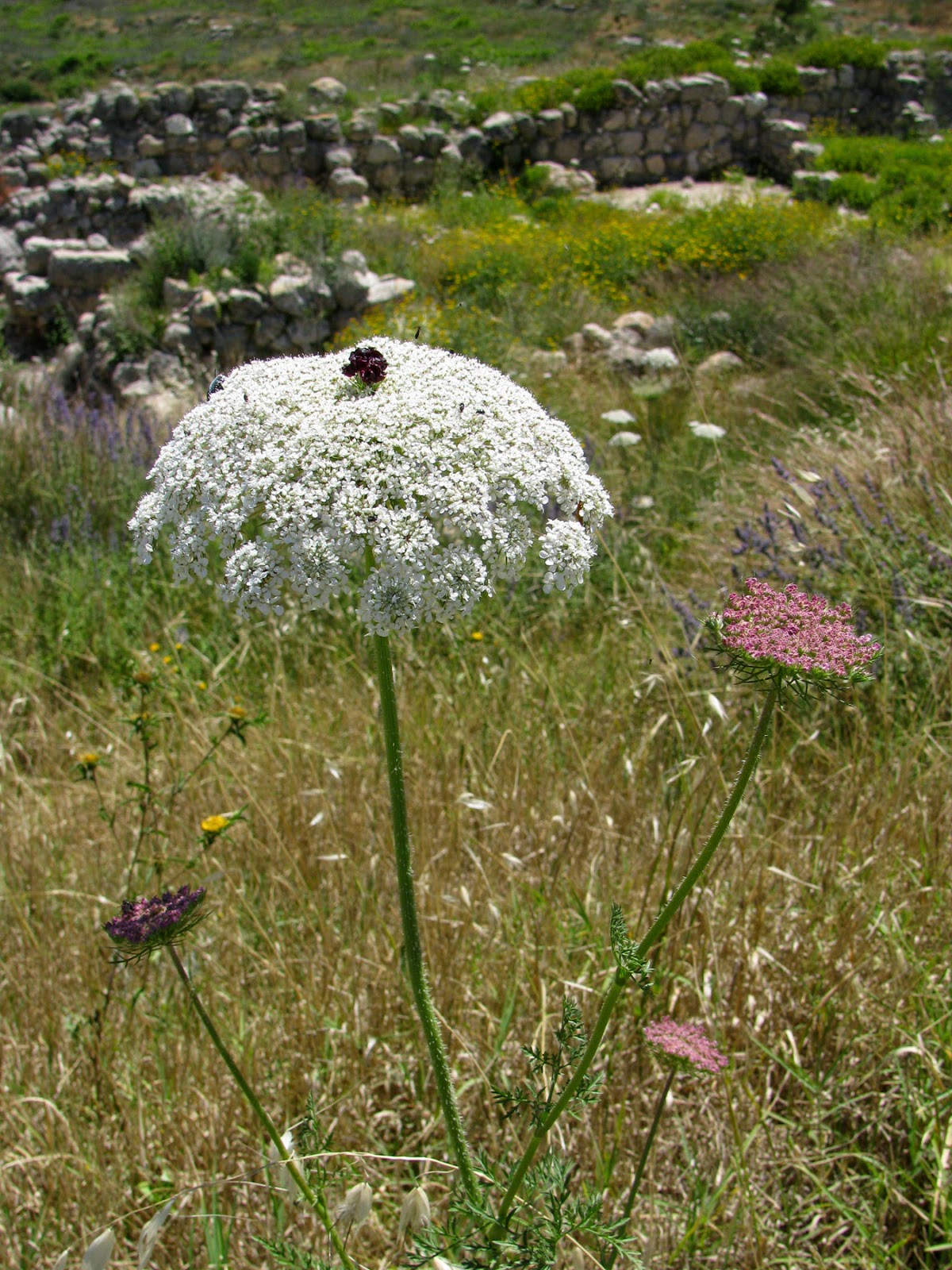 In ancient Israel Gezer was about as important a city as you could get. It is mentioned many times in numerous historic writings, including the Tanach (the Jewish Bible) and the Amarna letters. The Canaanite and the Israelite periods were the main periods of prosperity for the ancient city, but the Roman period was the last time in which it thrived.
Inhabitants of the first settlement at Gezer, toward the end of the 4th millennium BCE, lived in large rock-cut caves. In the Early Bronze Age, an unfortified settlement covered the tel. It was destroyed in the middle of the 3rd millennium BCE and abandoned for several hundred years. In the Middle Bronze Age, Gezer became a major city. The tel was surrounded by a massive stone wall and towers. During the Hellenistic period, Gezer was fortified by the Maccabees and was ruled by the independent Jewish Hasmonean dynasty. 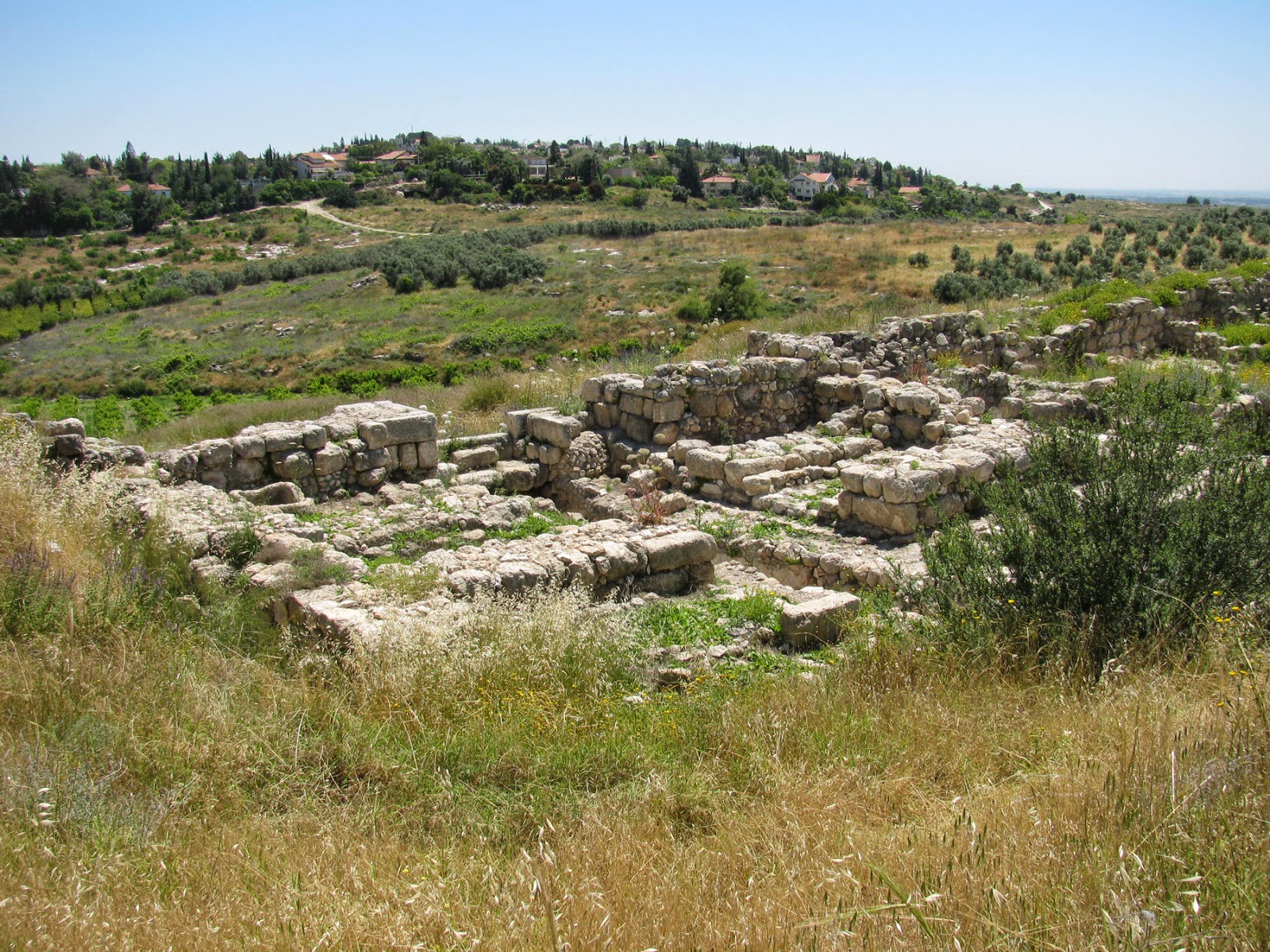 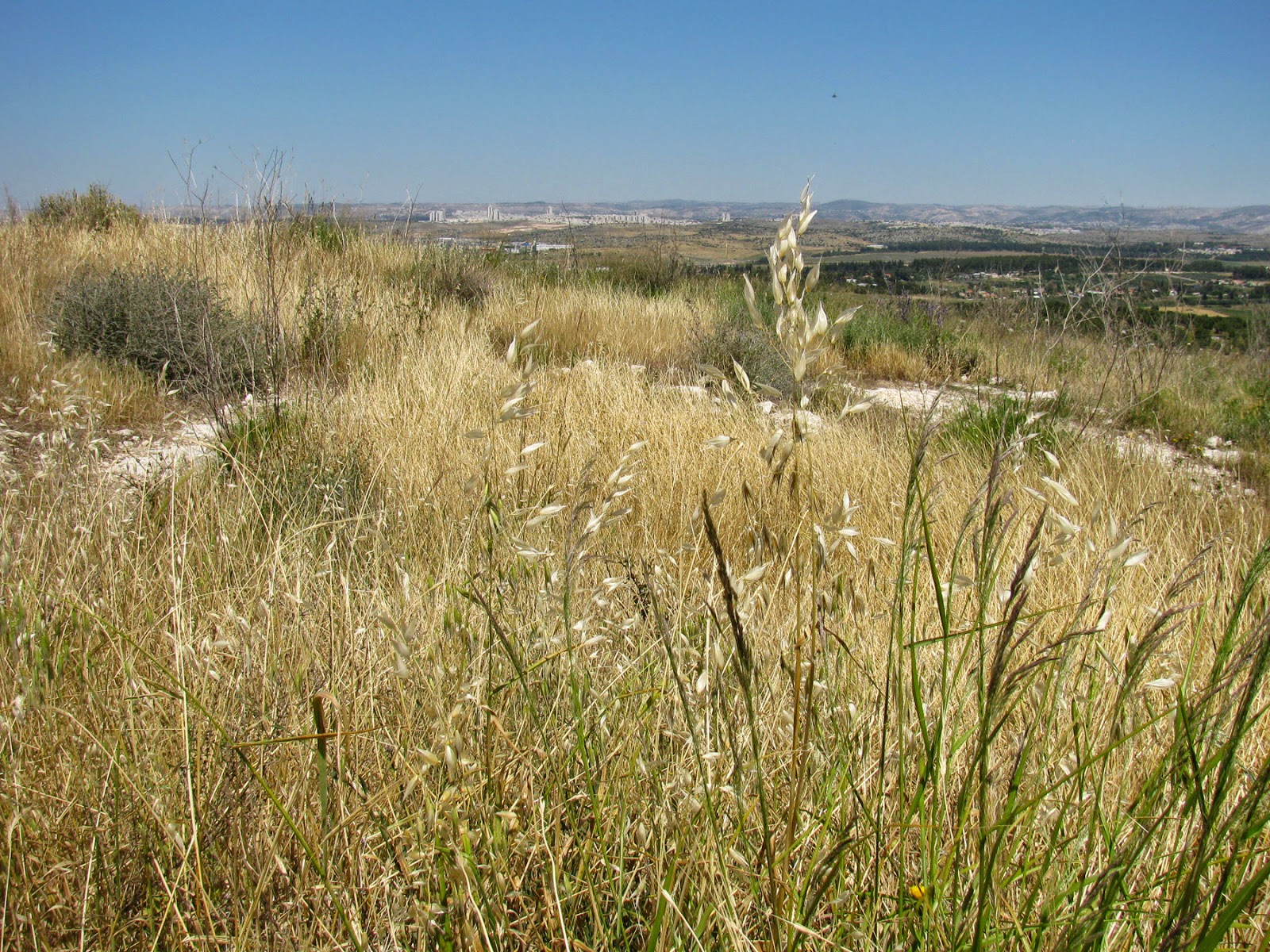 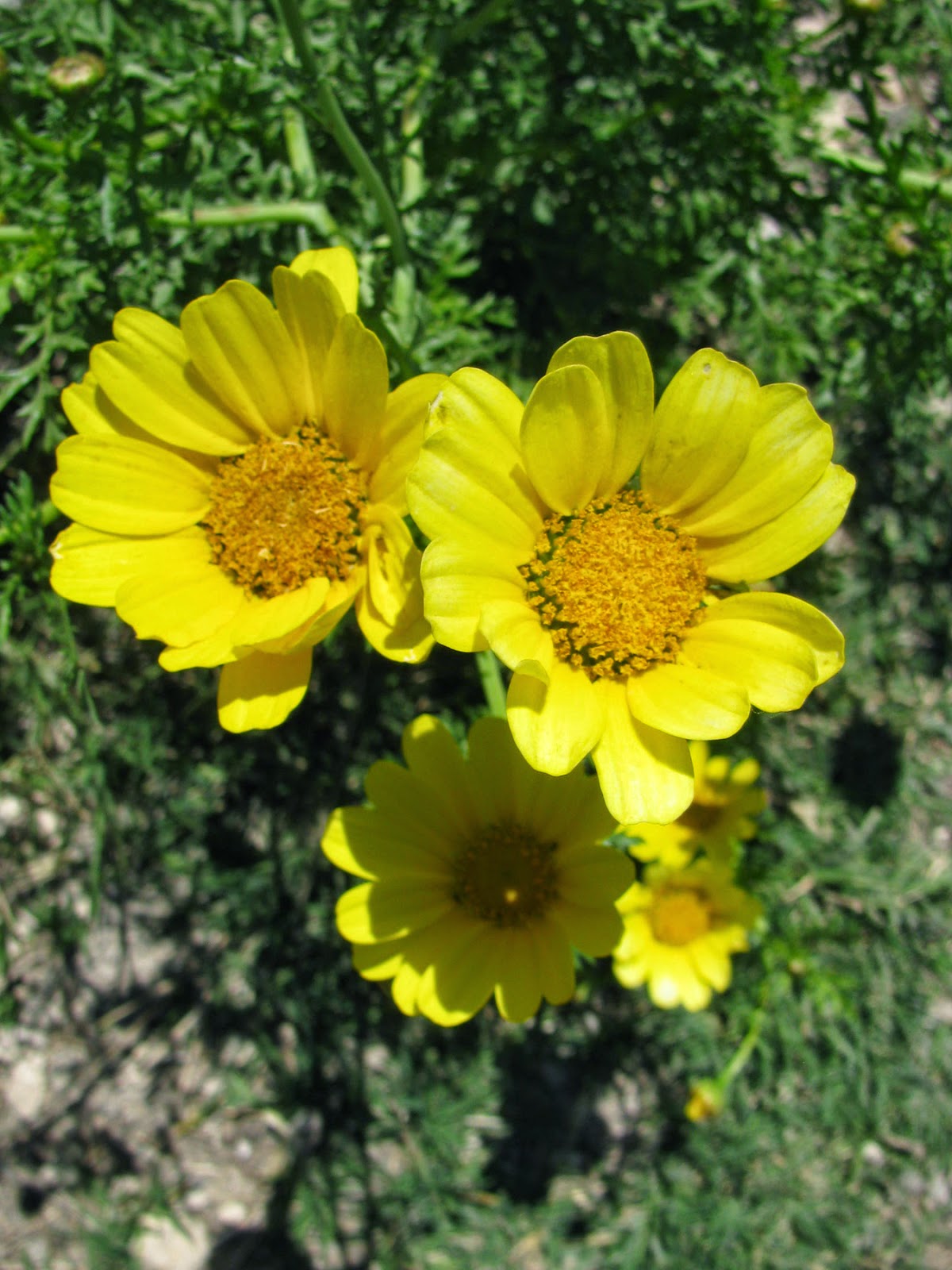 Undoubtedly Gezer’s most mysterious and impressive treasure is the collection of Standing Stones - Israel's very own Stonehenge! The exact purpose of these stones, or monoliths, is still being debated. Some scholars believe them to have been built as a Monolith temple in the Middle Bronze Age (about 1600 BCE), which served as a venue where alliances between tribes or city states were forged or renewed. The ten monoliths, the tallest of which is 3 meters high, may have symbolised the city of Gezer and nine allied cities in its vicinity. A large, square, stone basin also discovered in the area may have served as a container for a blood libation poured during an alliance ceremony. A ritual of this type is described in the Bible after Moses brought the Ten Commandments down Mount Sinai:
"Moses then wrote down all the commands of the Lord. Early in the morning he set up an altar at the foot of the mountain with twelve pillars for the twelve tribes of Israel  [... ] Moses took one part of the blood and put it in the basins, and the other part of the blood he dashed against the altar" Exodus (24:4-6). 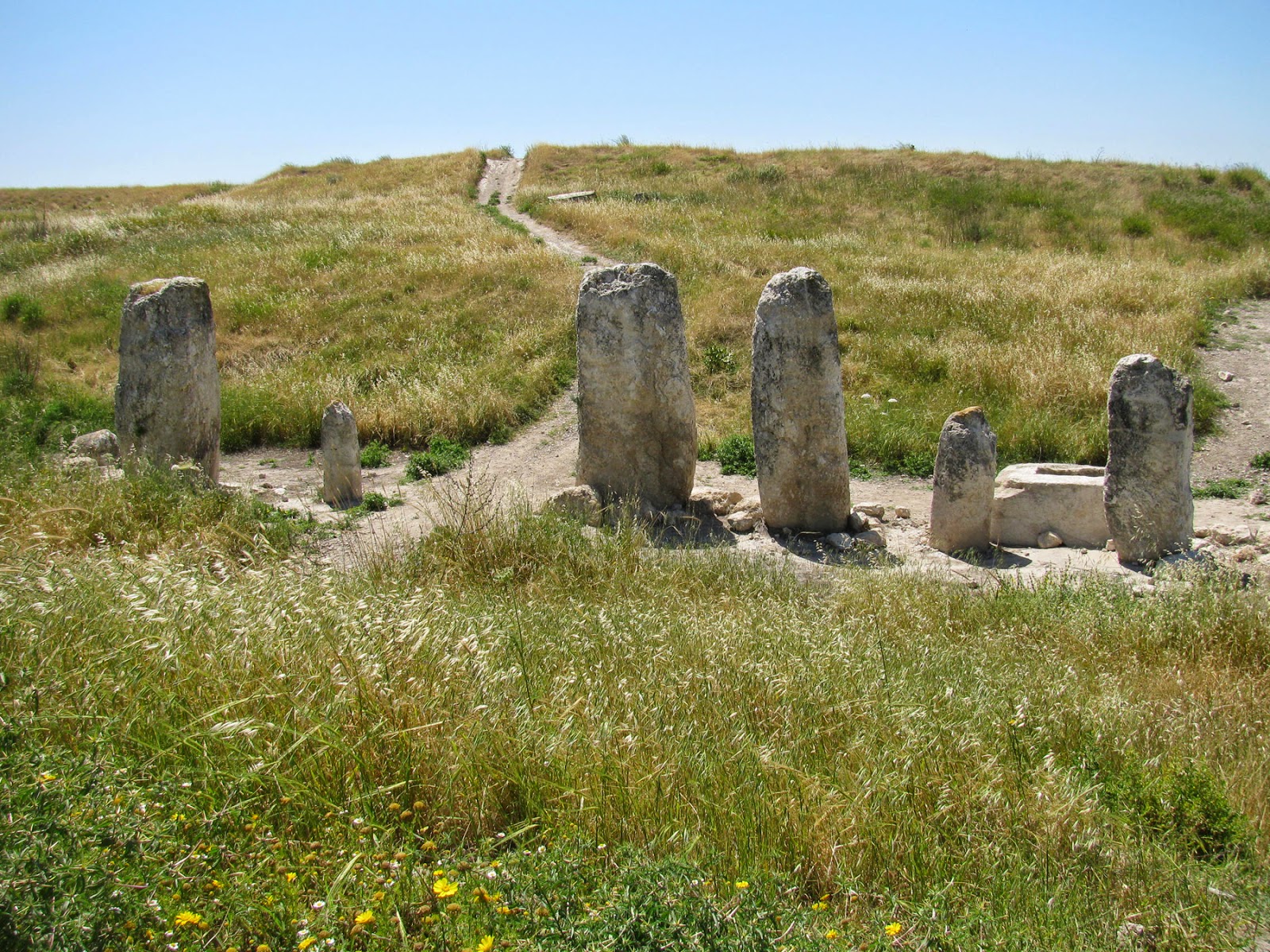 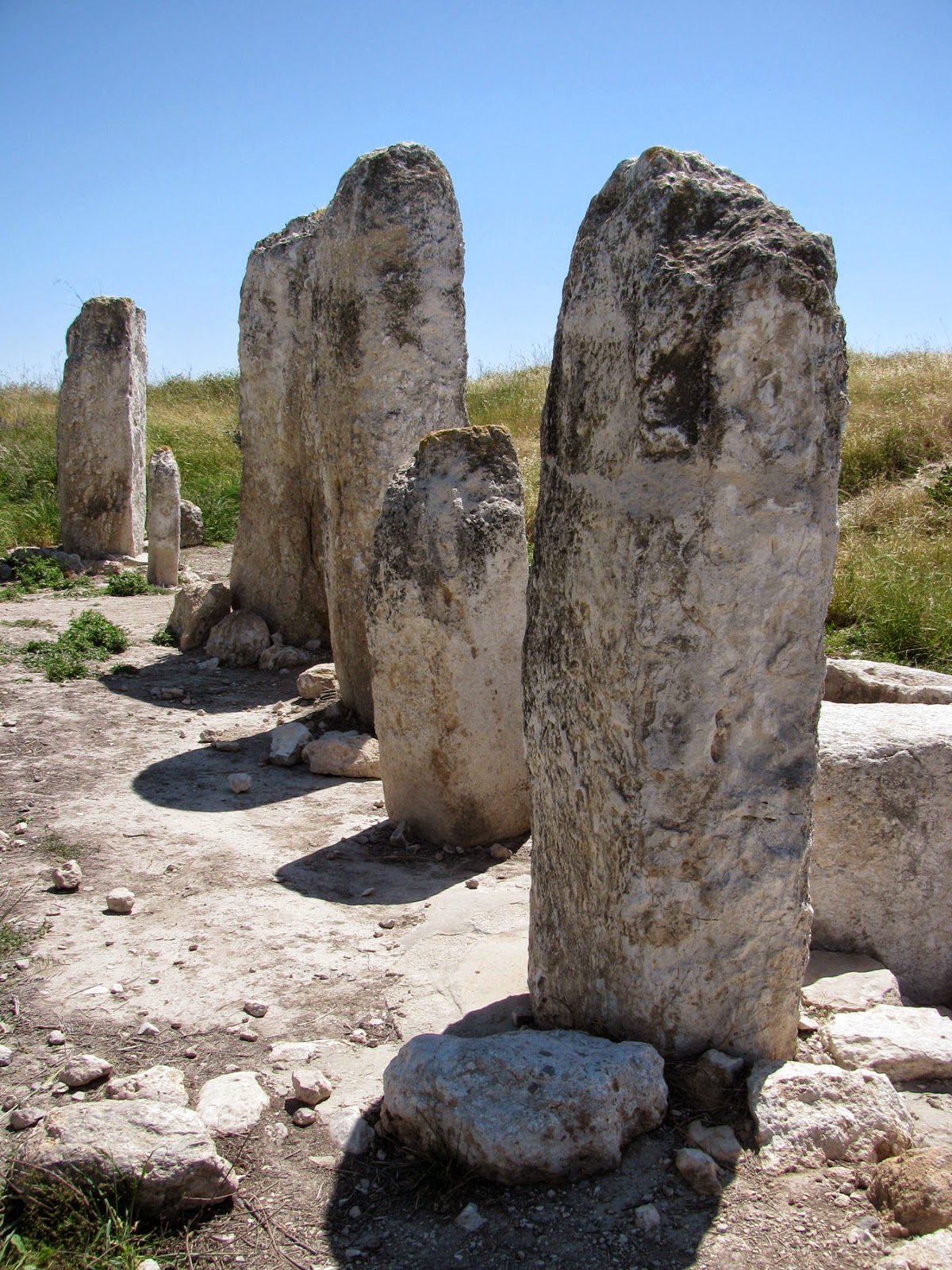 As well as being a major archaeological site with a fascinating and rich history, Tel Gezer is also a place of great beauty. We visited on a warm April afternoon, as the spring flowers were just beginning to fade, but a special time to visit is during the early months of spring when the ground is carpeted with red poppies and lilac cyclamen flowers. Tel Gezer was the perfect place to absorb some history and enjoy a gentle hike. I'm sure we'll be going back there again. 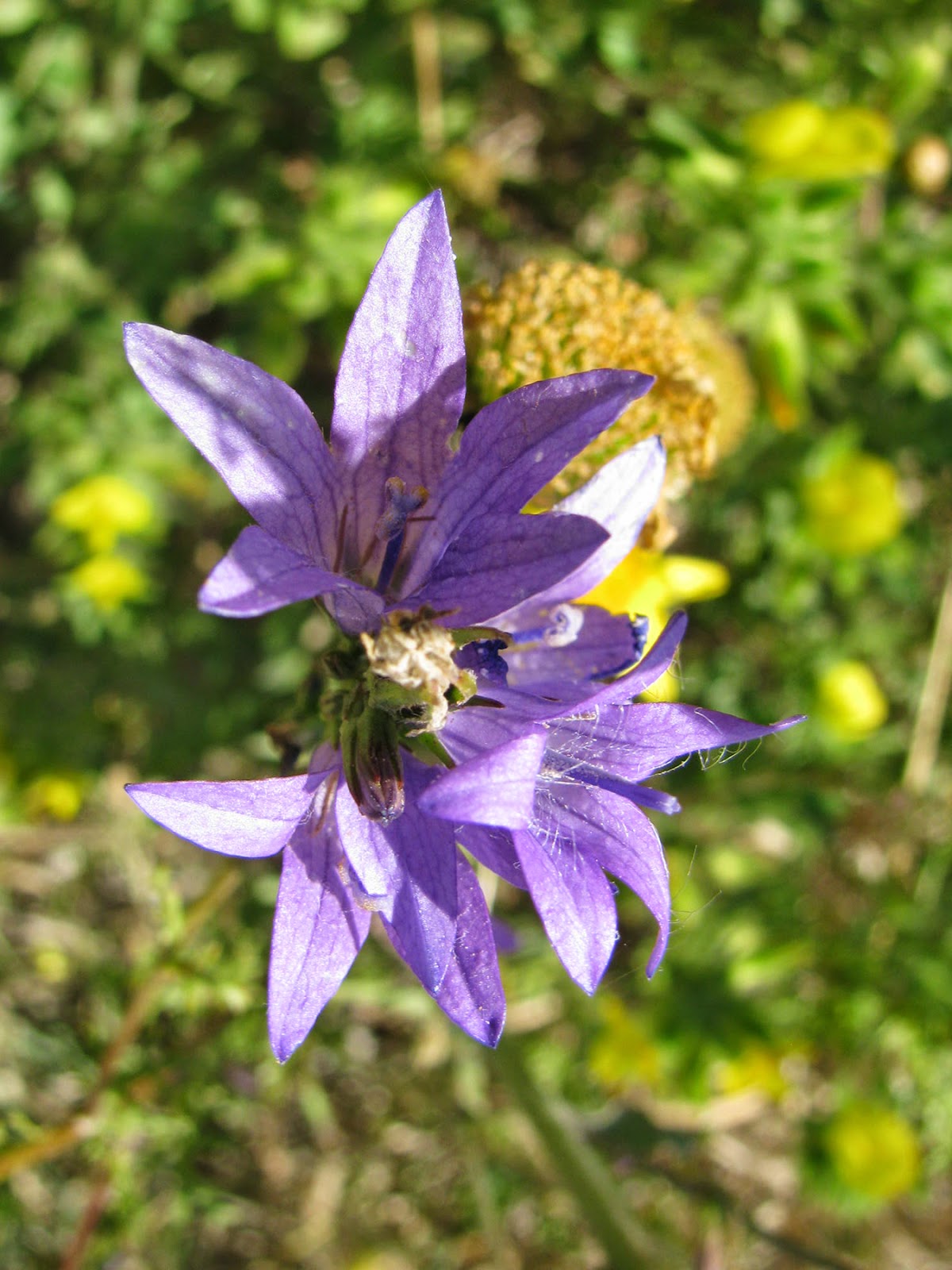 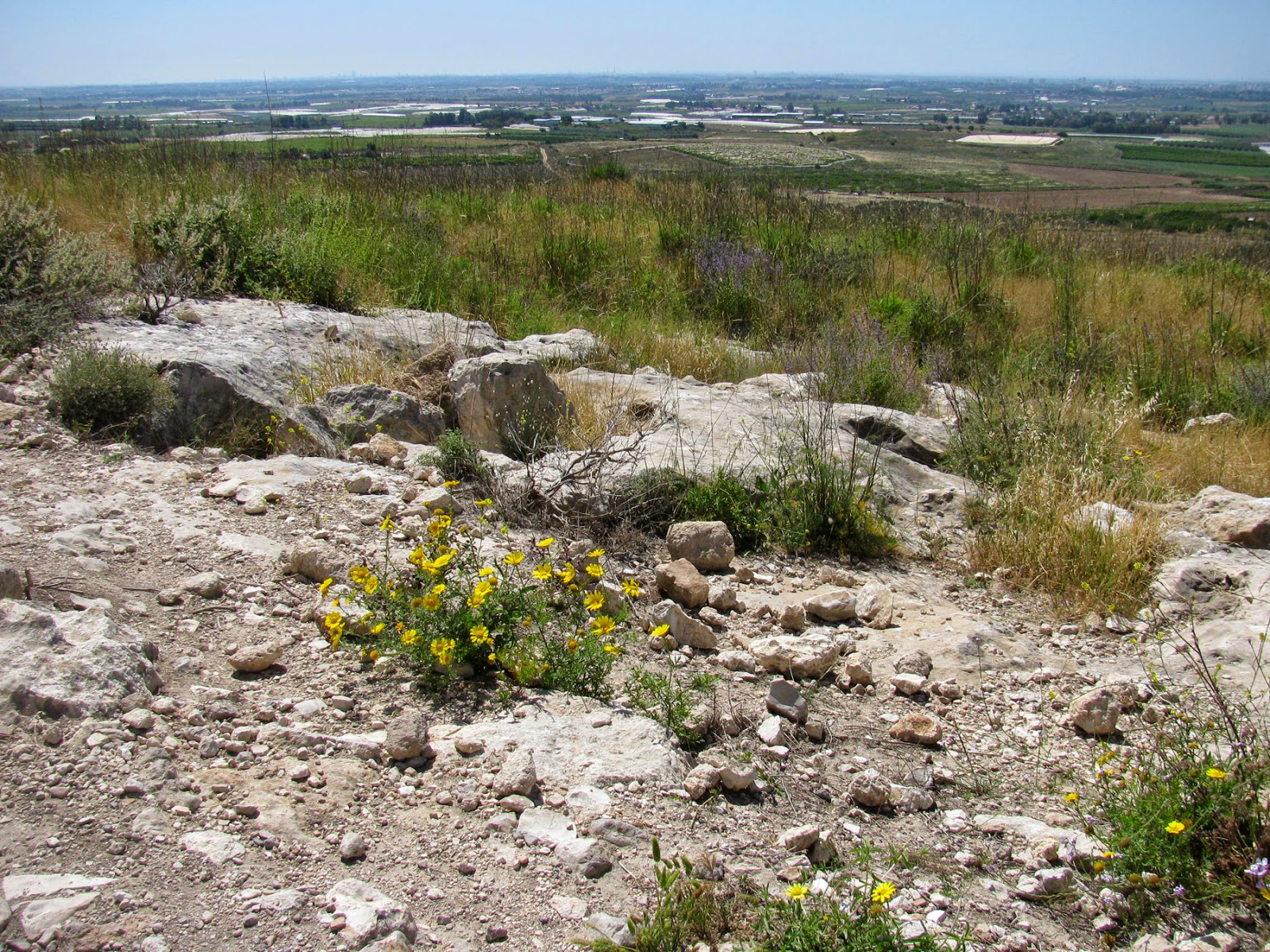 Posted by Handmade in Israel at 08:53 4 comments 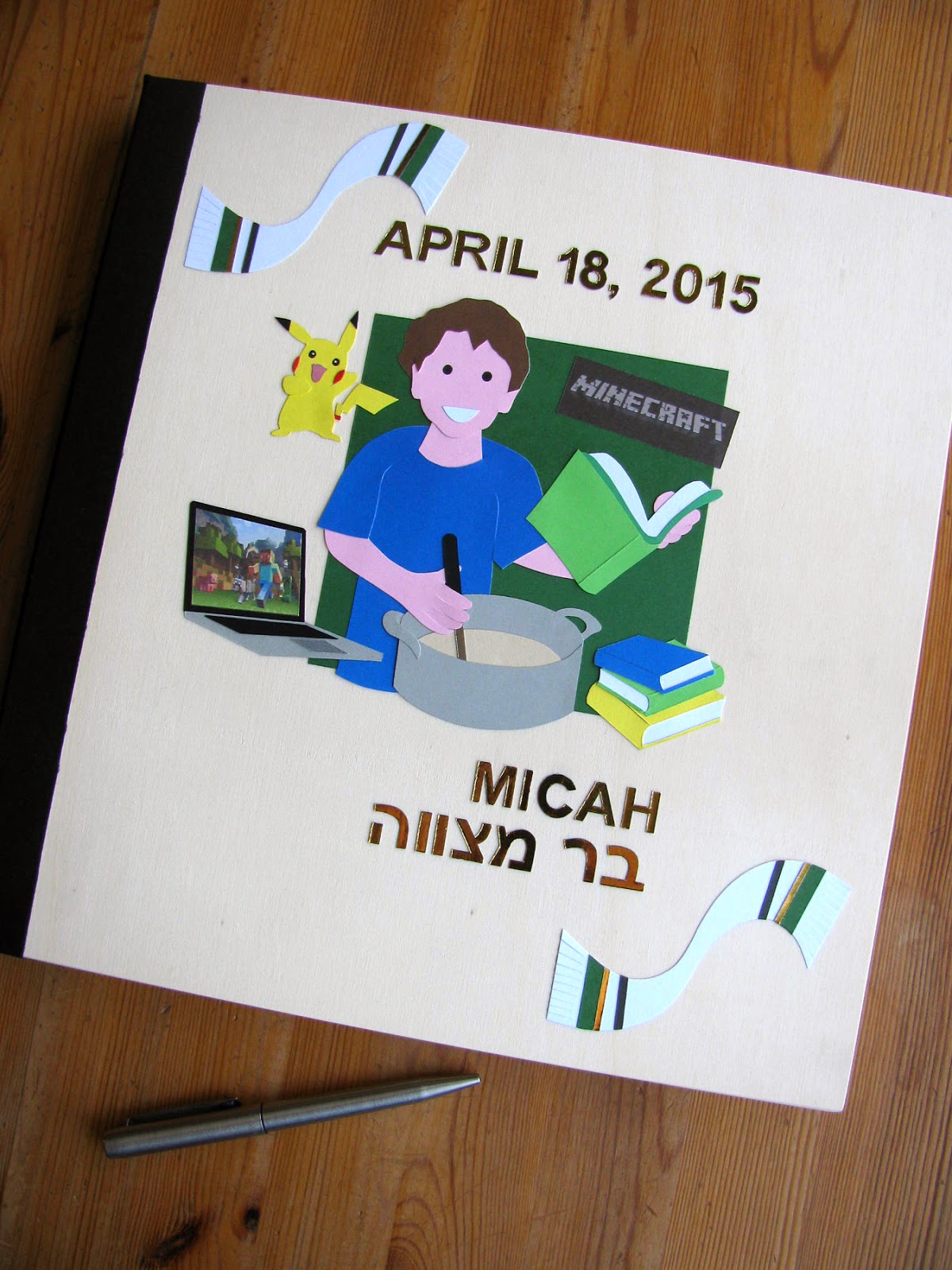 Micah loves to read - his Mum says that he's "obsessed" - and he would rather read than do almost anything else! Therefore I had to show him with a book on the cover of his Bar Mitzvah album. He also loves Pokemon and the computer game Minecraft. In addition, Mum mentioned that he enjoys cooking and also likes making potions, building things and creating. Micah uses his Mum's laptop on a regular basis and so I showed it next to him, with Minecraft on the screen.

I added Micah's name and the date of his Bar Mitzvah celebration, with the words בר מצווה (Bar Mitzvah in Hebrew) underneath. 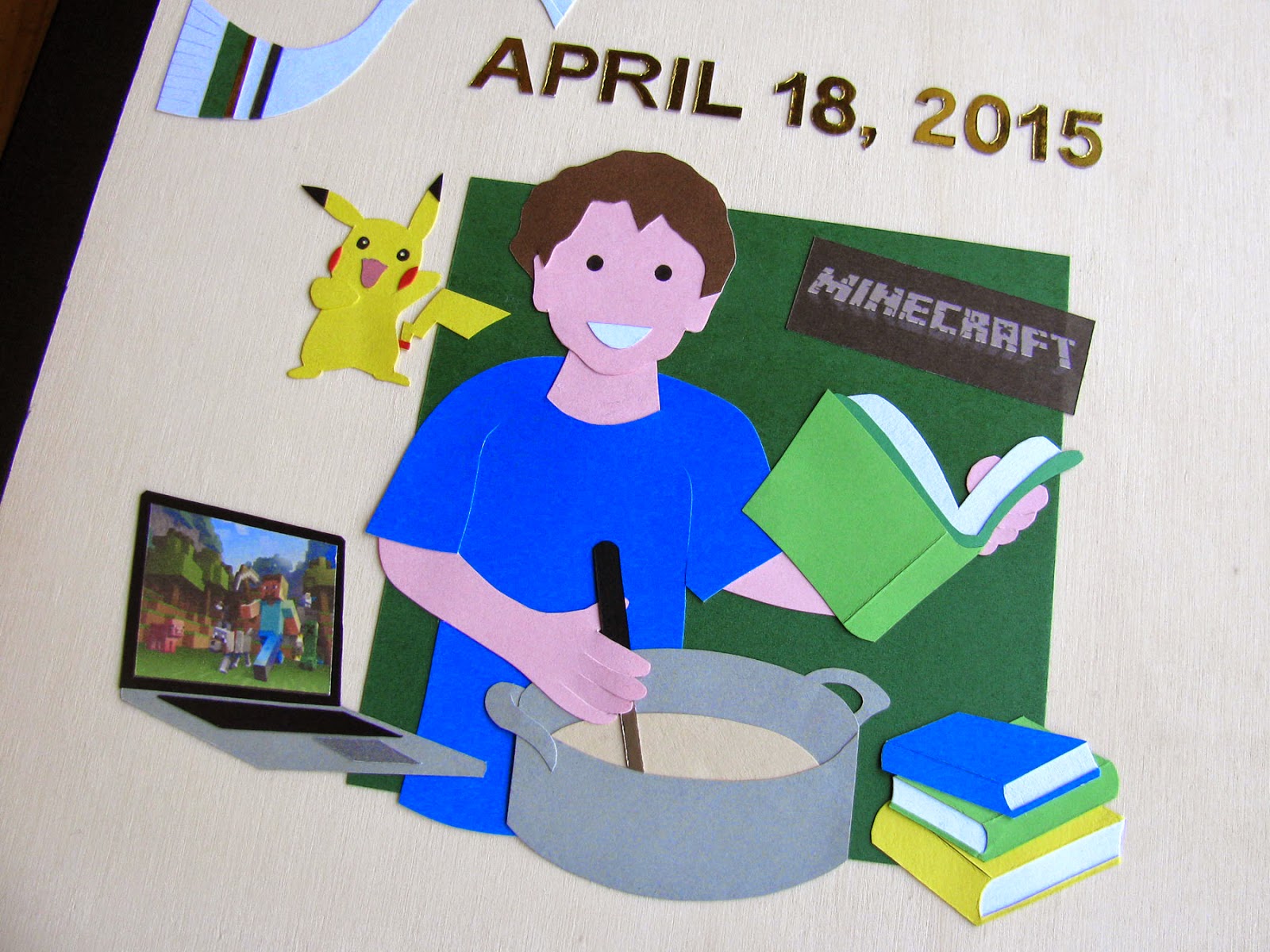 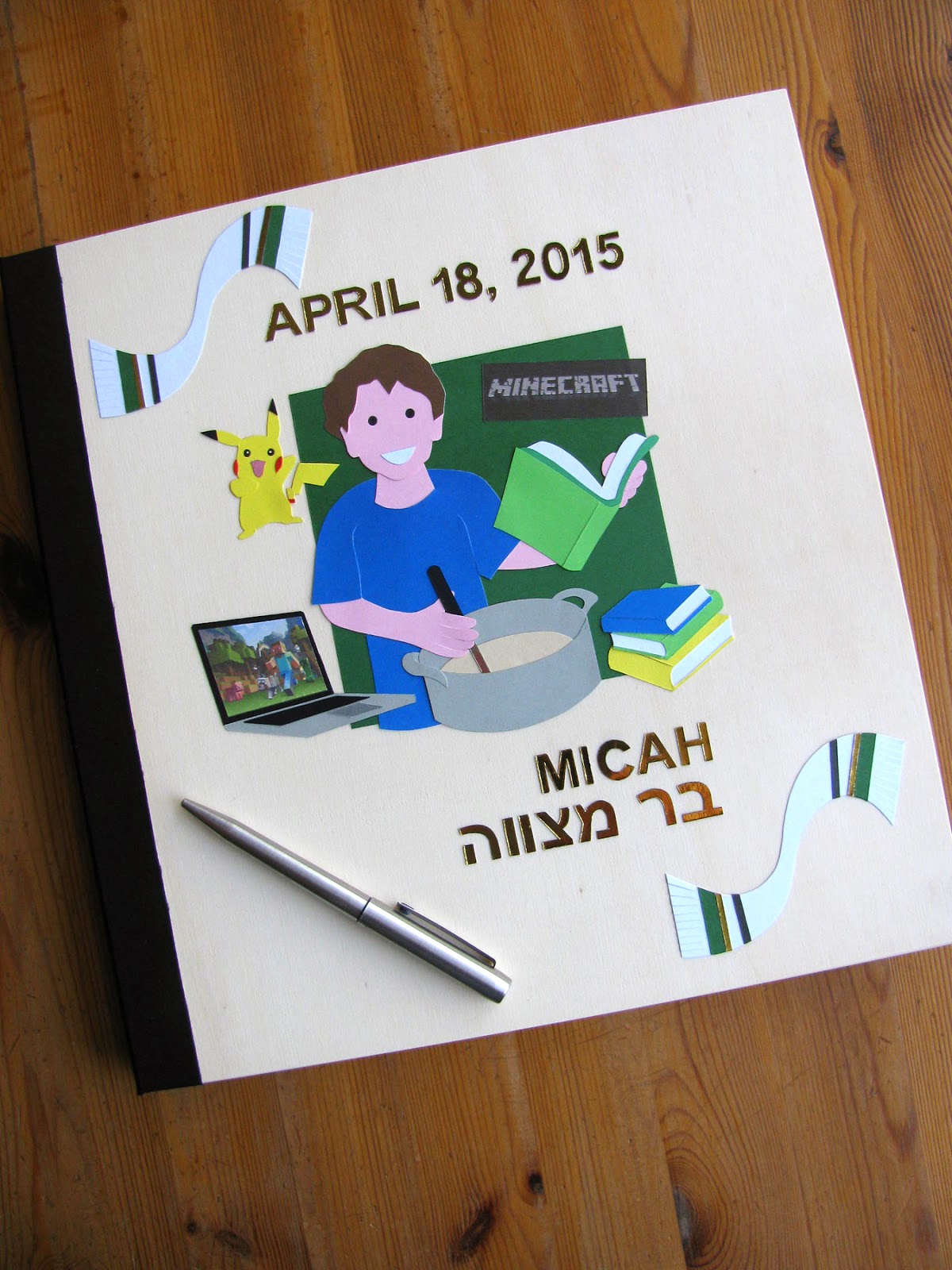 I decorated several pages inside the album based on Micah's hobbies. The opening page features a pile of books, since that seems to be the thing that occupies him the most. Next I crafted a paper version of a Minecraft Creeper, followed by some cooking equipment, since he likes to cook up a storm. The final two pages in the album display his school's badge, and then two little glass jars and a test tube, all full of some interesting coloured potions! I added a tallit (a Jewish prayer shawl) to each page, and featured them on the cover too. Traditionally some boys begin wearing the tallit for the daily prayers from the age of Bar Mitzvah, whilst others wait till after marriage. 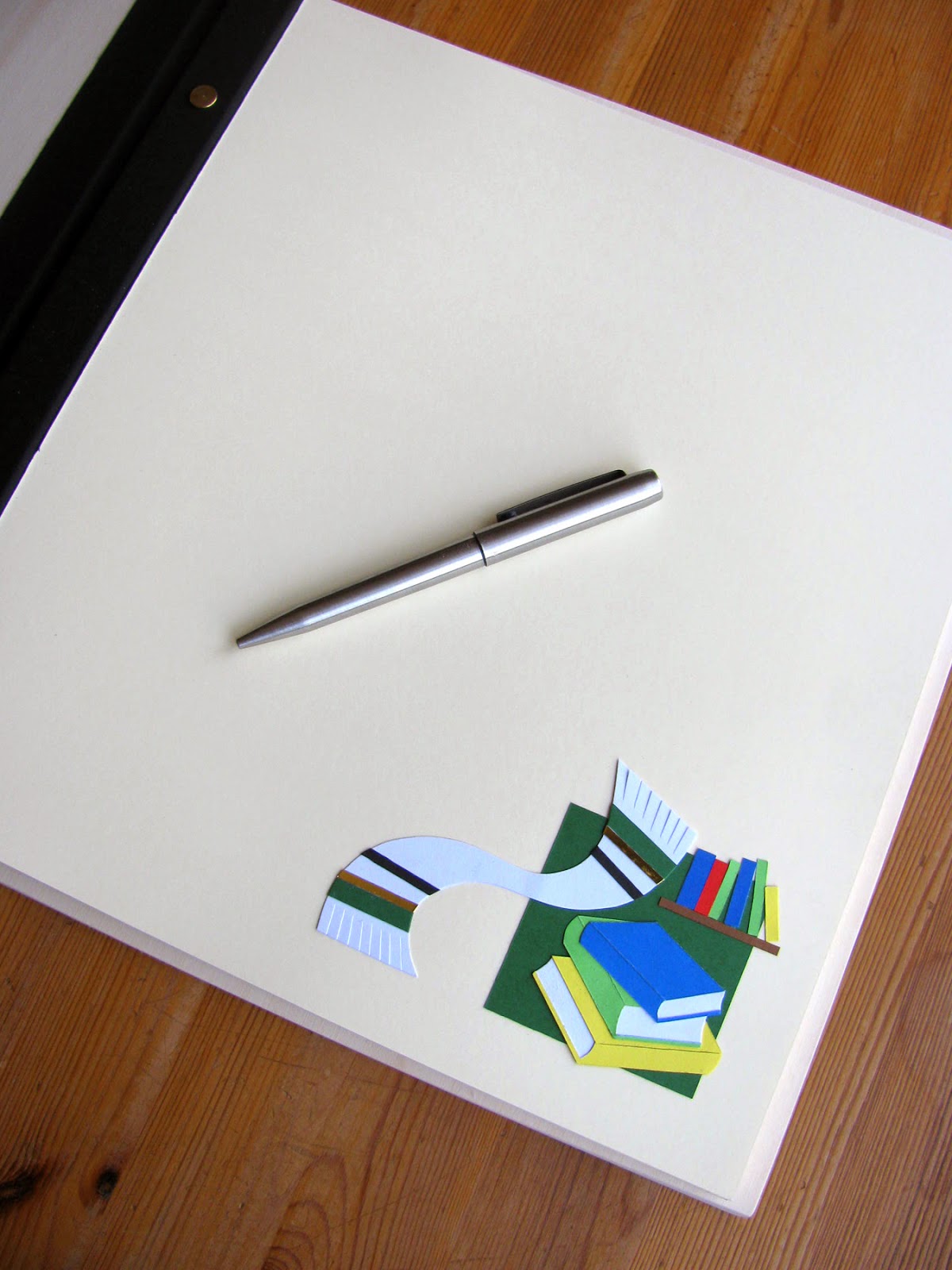 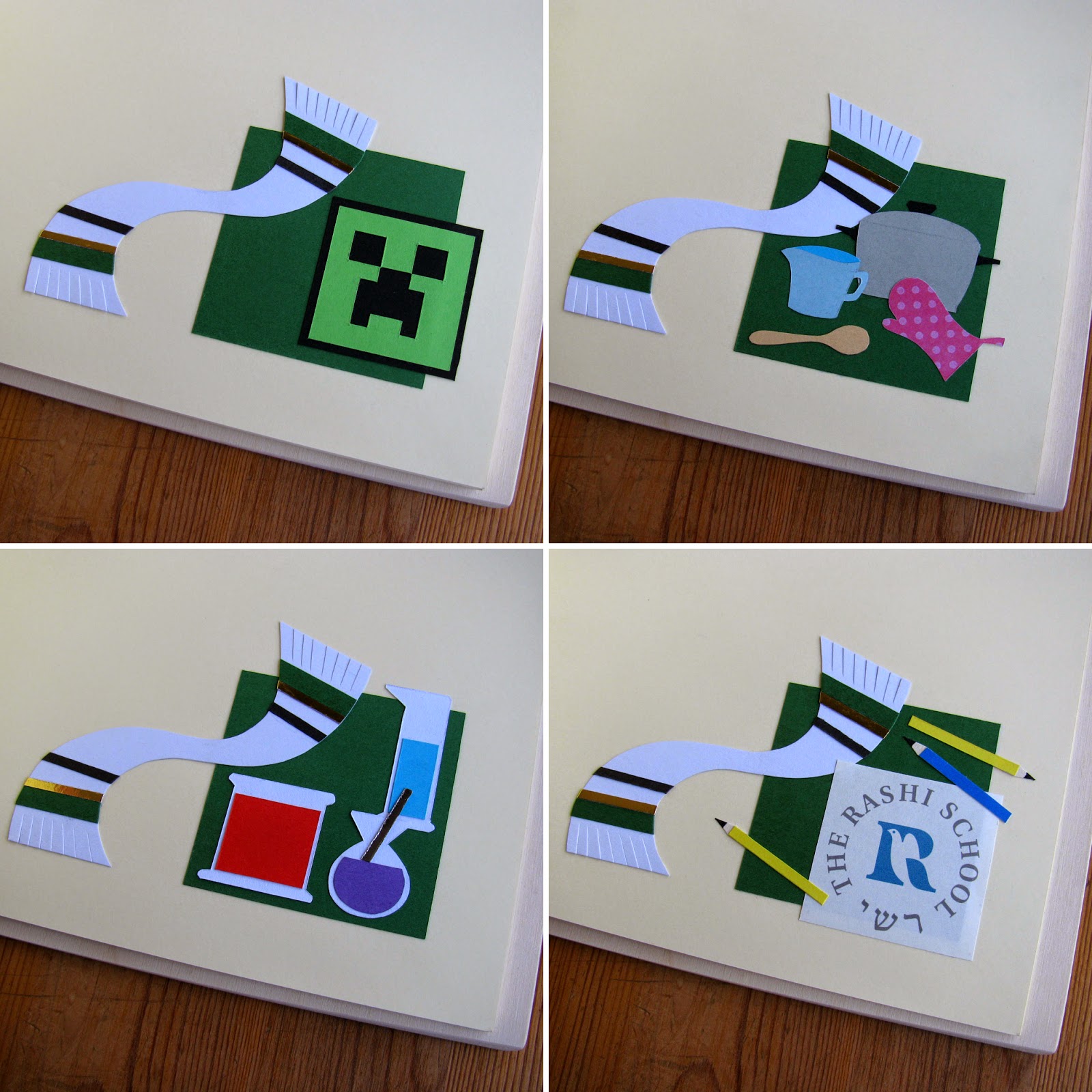 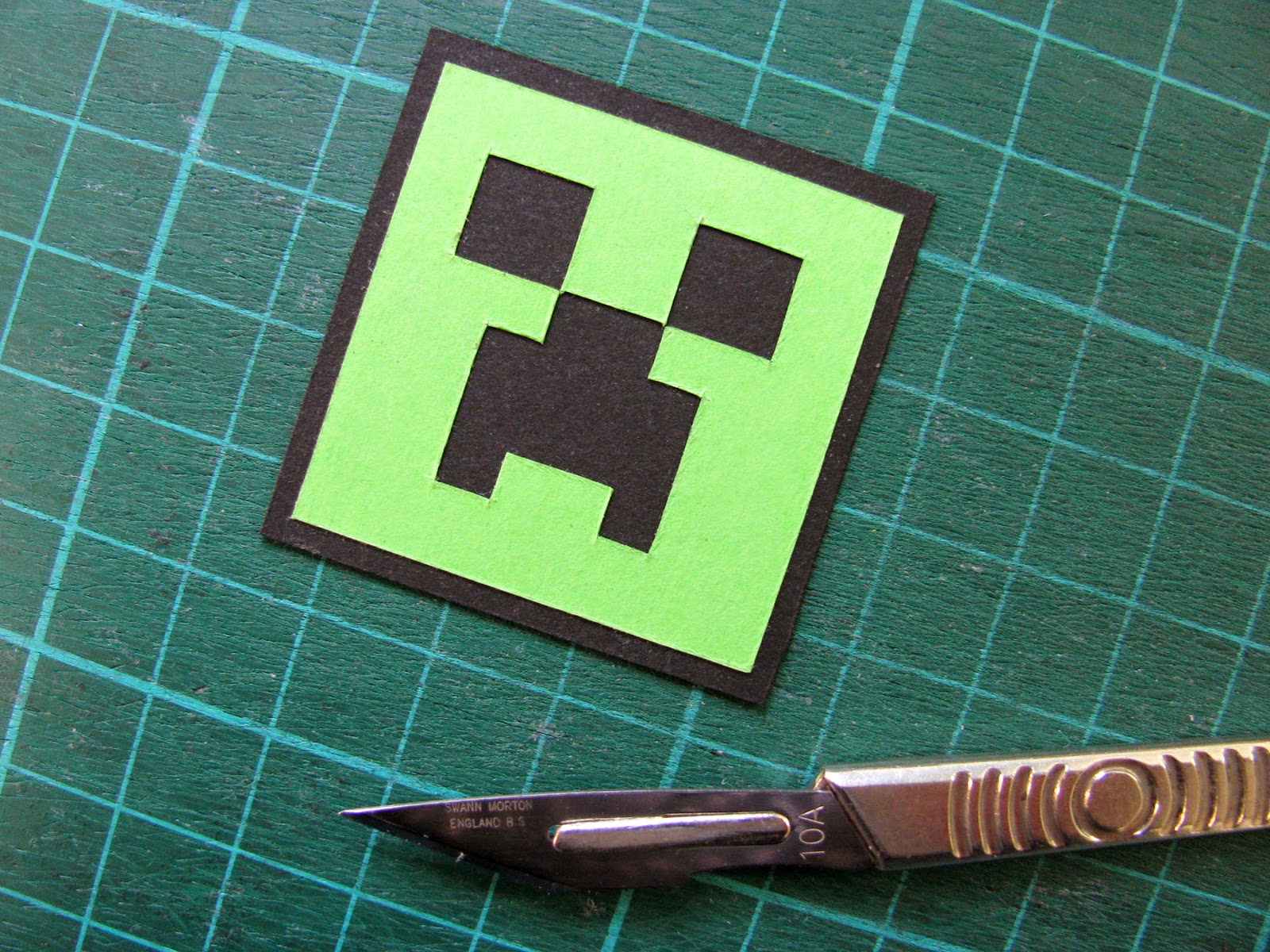 Whilst Micah's Mum supplied my customer with all the information about her son, she did not know what I was creating. "I am so curious about this present!" she wrote. I hope that both she and Micah were surprised by and pleased with what he received. 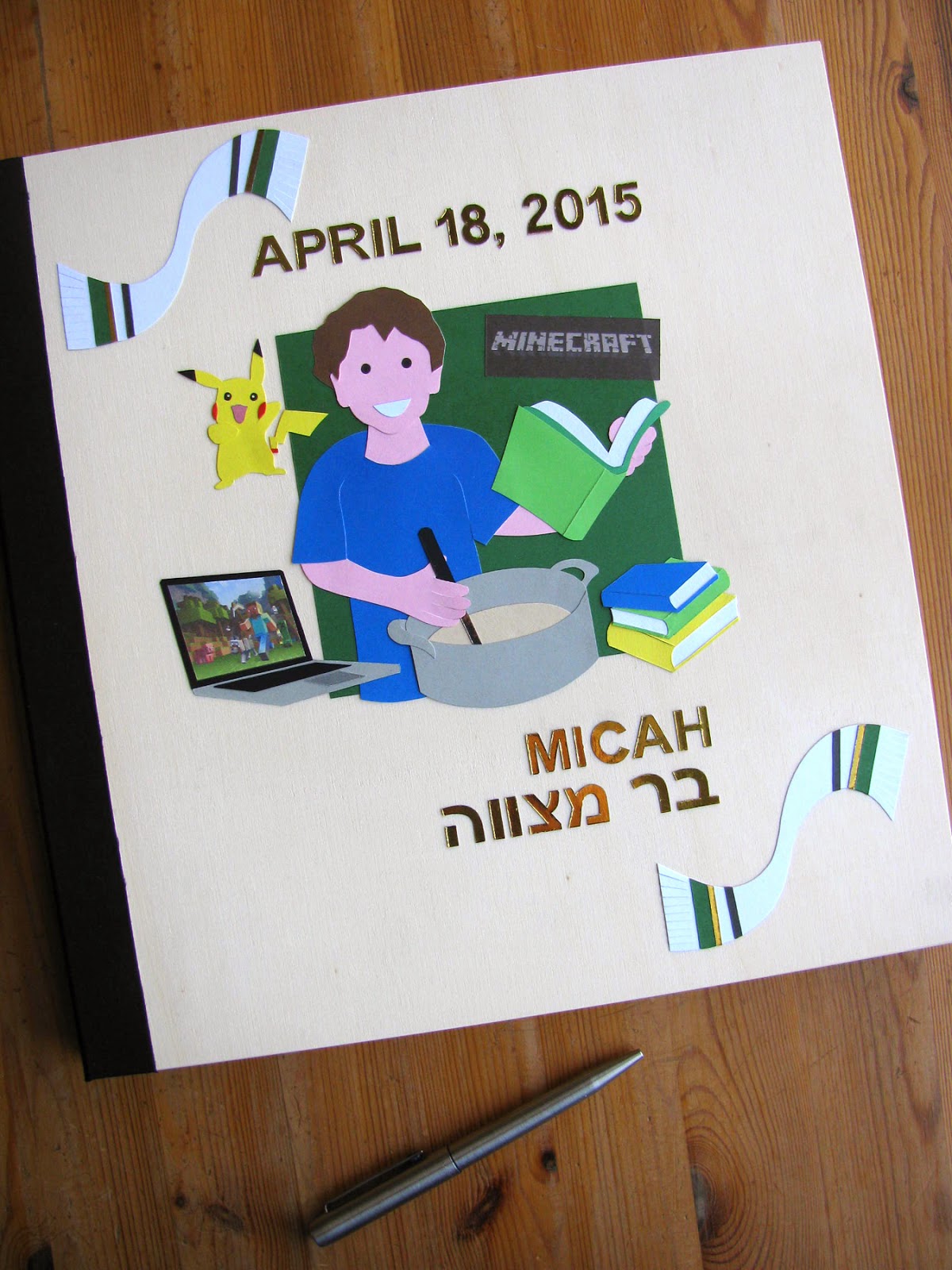 Posted by Handmade in Israel at 09:28 4 comments