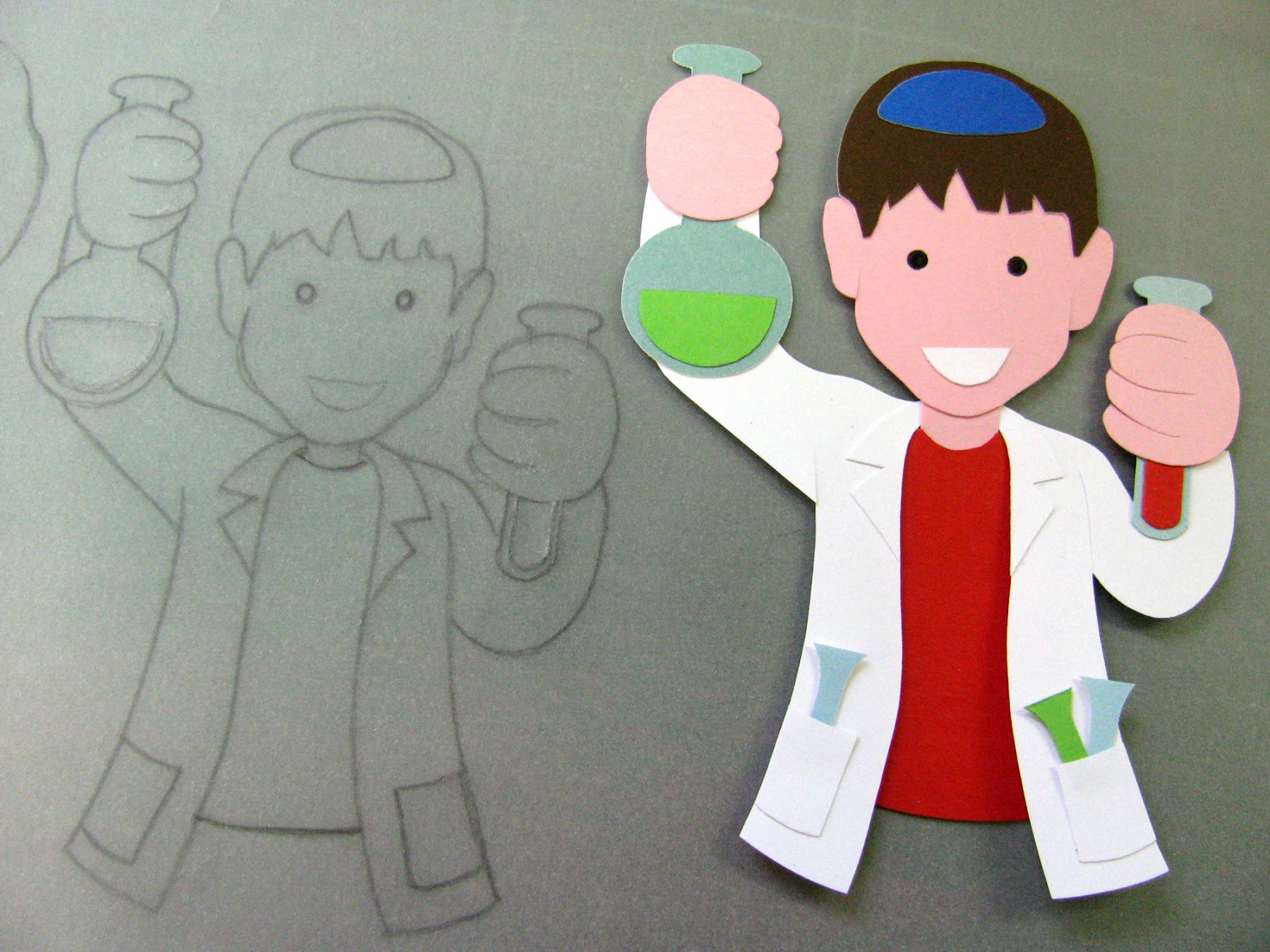 Daniel is celebrating his birthday today! How do I know? Well, not long ago he reminded his Mum to order his birthday card! My cards have become a tradition with his family as much as they are with my own you see, and Daniel knew what he wanted on this year's card. He wanted to be shown as a scientist, with a white coat and test tubes in his pockets.
His Mum told me that Daniel likes to build models and invent things too. He also still writes his own little books. You can see a card I made for him on that theme right here. He has also been shown as a carpenter and as "Mr. Maker" in the past. Like I said, my customised cards really are a part of his family's birthday celebrations and I am thrilled about that! 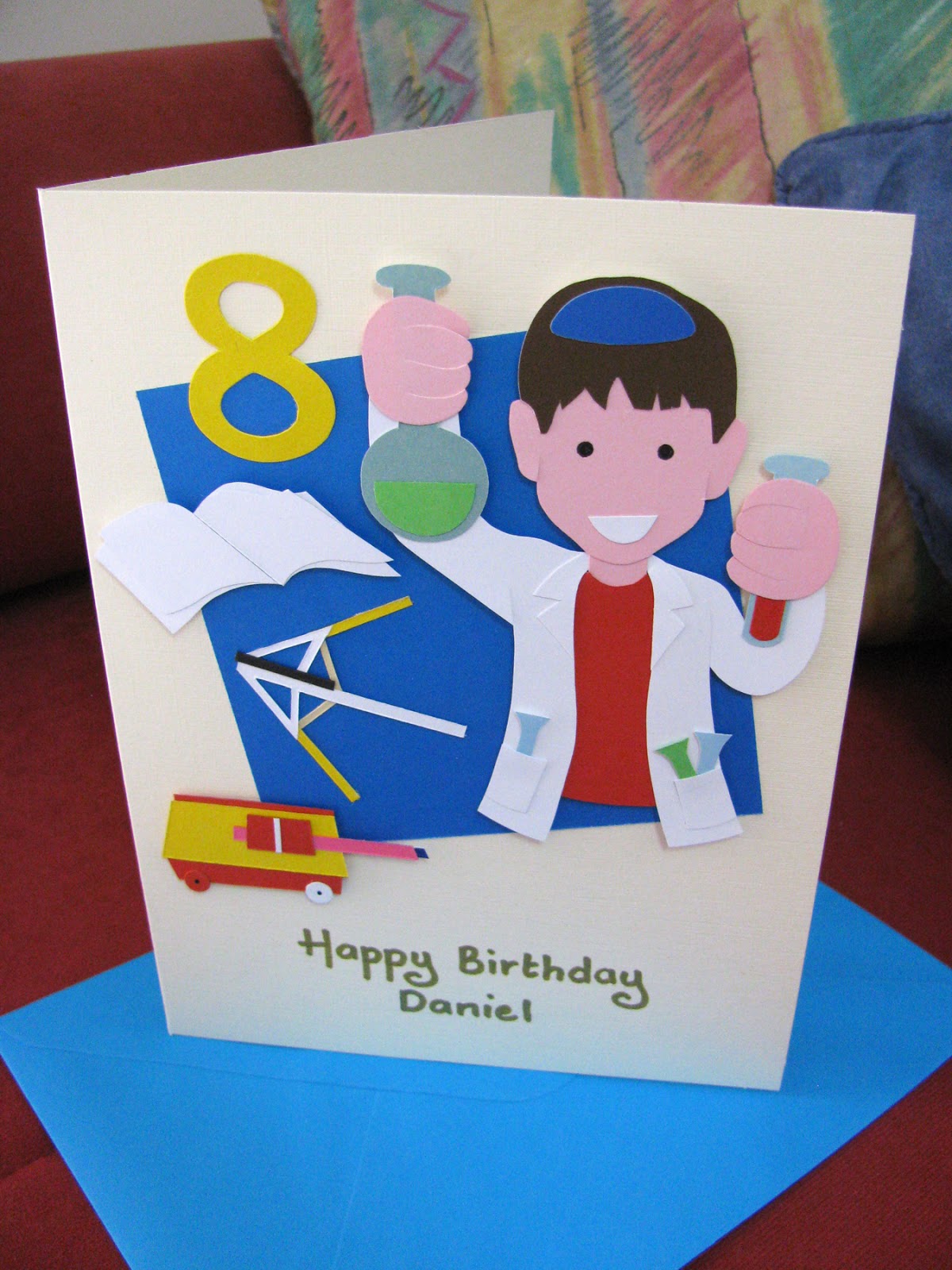 I depicted Daniel exactly as he requested, wearing a white laboratory coat and with test tubes in his hands. His Mum sent me photos of just some of the models he has built, so I re-created them out of paper and added them to the card as well. Finally, a book made from several sheets of paper is lying open next to Daniel, waiting for him to add something to it!
Happy 8th birthday, Daniel. May your dream of becoming a great scientist come true! 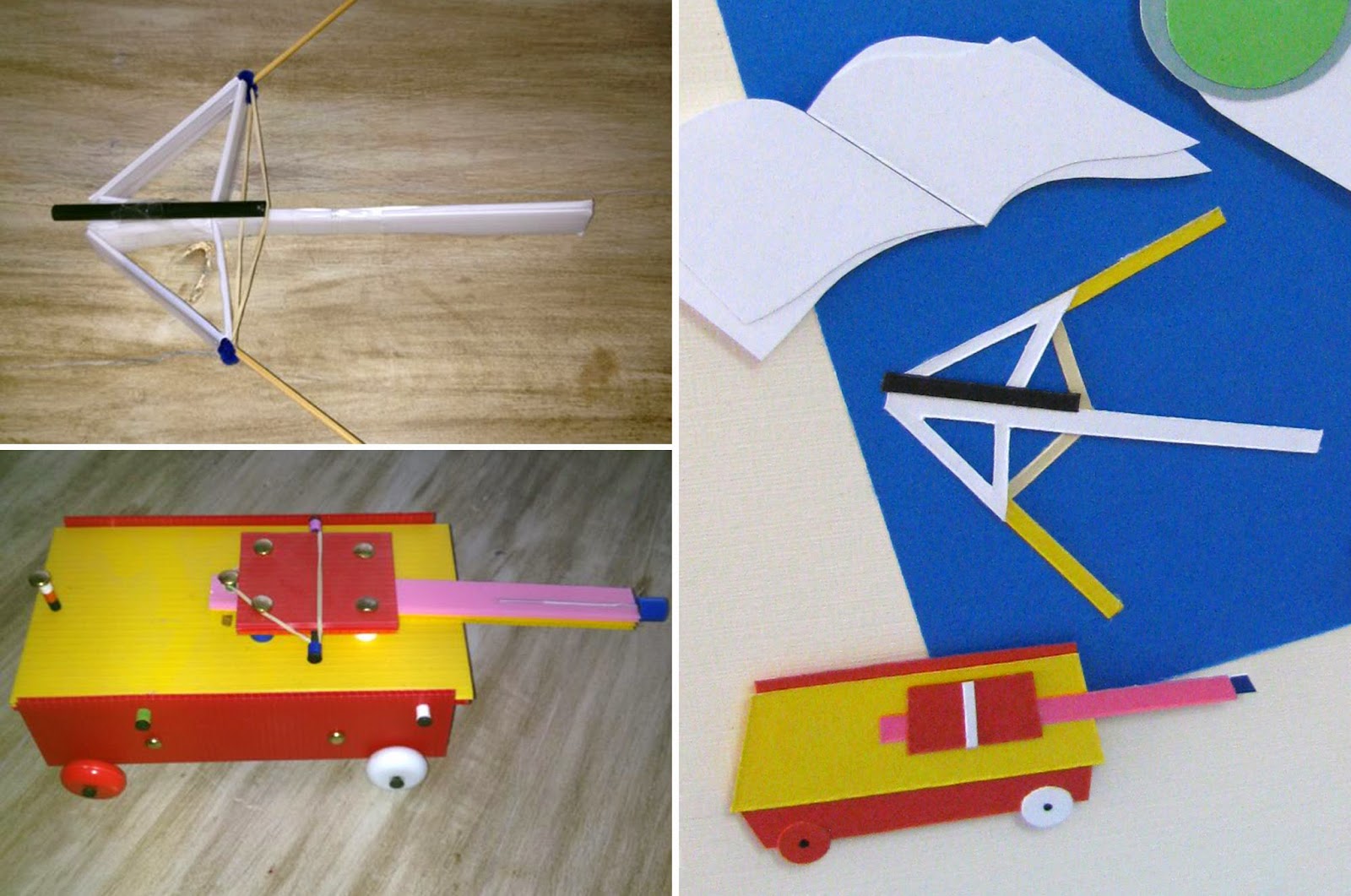 If you would like to order a customised card for that special occasion, you can do so right here.
Posted by Handmade in Israel at 08:00 3 comments

It's been some time now since my eldest son's Bar Mitzvah but I've been holding off on showing his card because I didn't want my blog to become "The Bar Mitzvah blog". It does seem like I have posted a lot of Bar Mitzvah related projects lately, be they for my own son or for other boys of his age, but the Bar Mitzvah year has come to an end now for my son and his friends. I won't be posting anything else about family Bar Mitzvahs until... well... until my youngest son is Bar Mitzvah in two year's time! There will definitely be some Bar Mitzvah albums to see here though. I am currently hiding a couple away until the dates of the celebrations have passed. 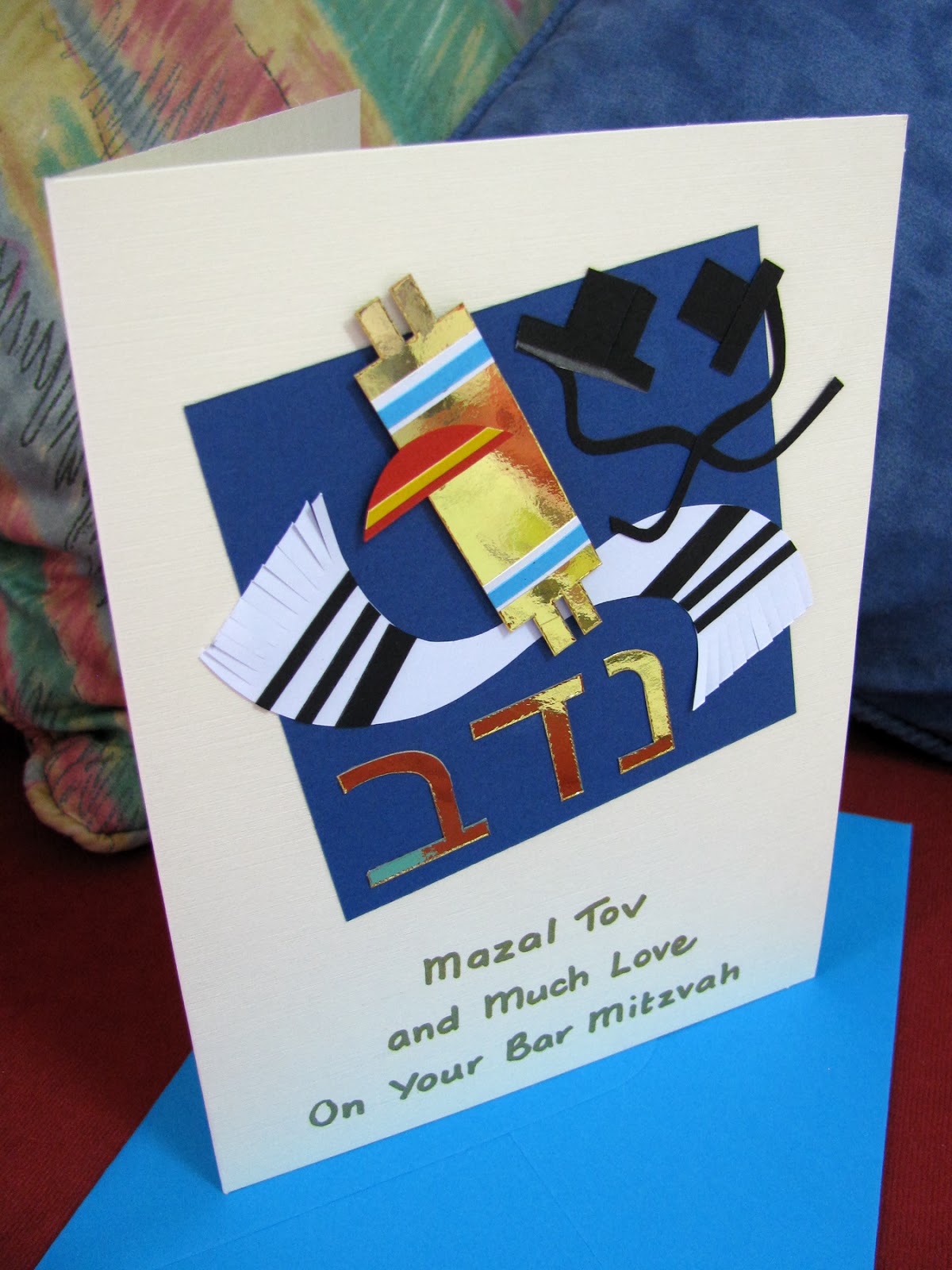 The card I made for Nadav, above, displays his name prominently in Hebrew. A few of Nadav's friends had their Bar Mitzvahs after him. They were the youngest kids in the school year. Of course I made cards for them too, with similar symbols on them. On each card I added a black and white striped tallit, the Jewish prayer shawl. The tallit is a rectangular-shaped piece of linen, wool, or silk with special fringes called tzitzit on each of the four corners. A Jewish boy who has reached the age of 13 wears a tallit for morning prayer, during the week, as well as on Shabbat and other holy days.

I have already blogged about the design I created for my son's invitation, but am showing it here once again since it illustrates how the tallit is worn, draped over the shoulders like a cape. 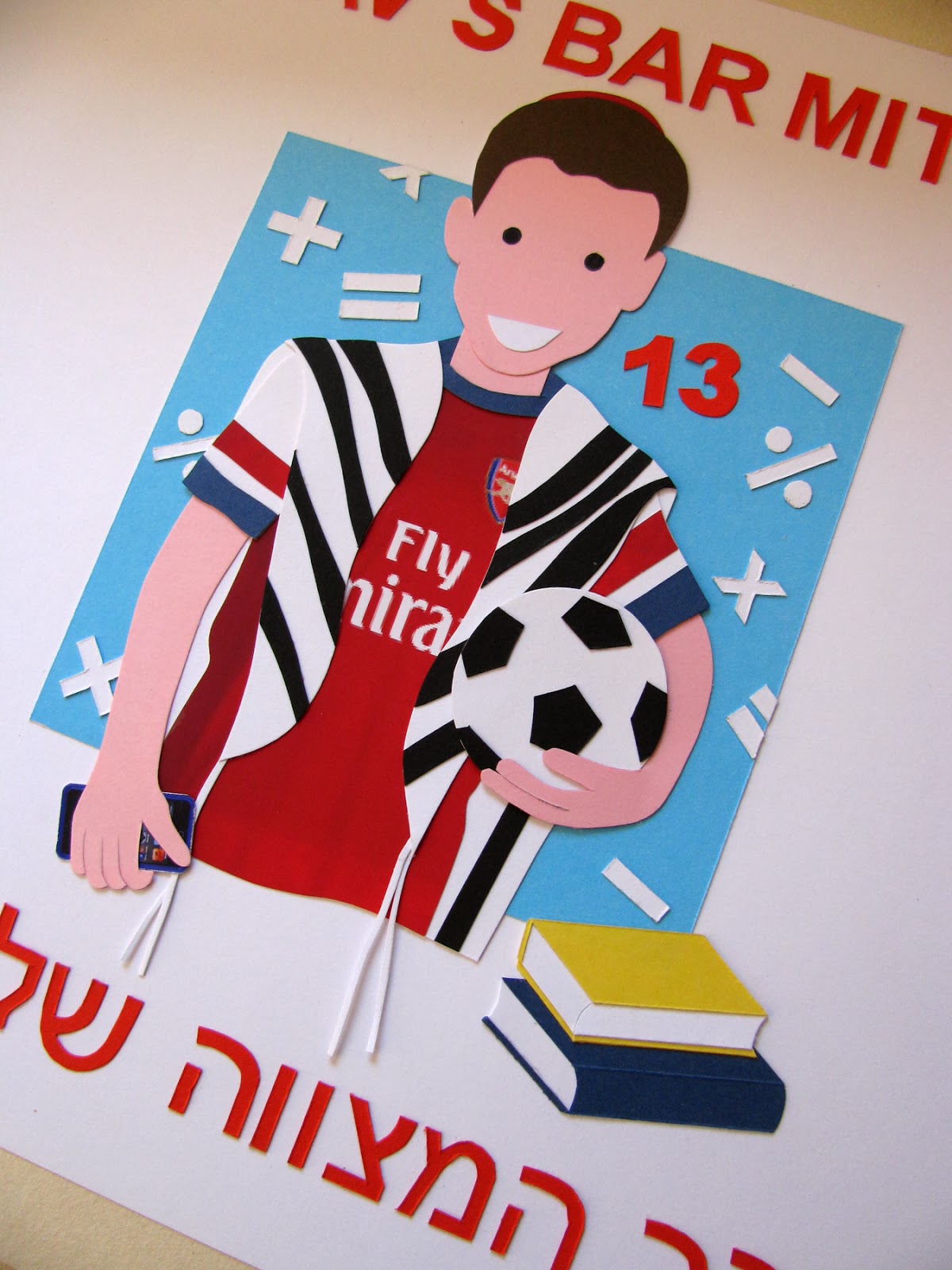 Next to the tallit on each of the cards is a Sefer Torah. The Sefer Torah, or Torah Scroll, contains The Five Books of Moses, hand written on parchment (animal skin). The Sefer Torah is kept in the Ark in the Synagogue and portions are read from it publicly on Shabbat, Holidays, Fast Days and on Mondays and Thursdays, during prayers, in the presence of a minyan (quorum of ten Jewish males above the age of thirteen). A boy is called up to read from the Sefer Torah on the first occasion that the Torah is read following his 13th birthday. 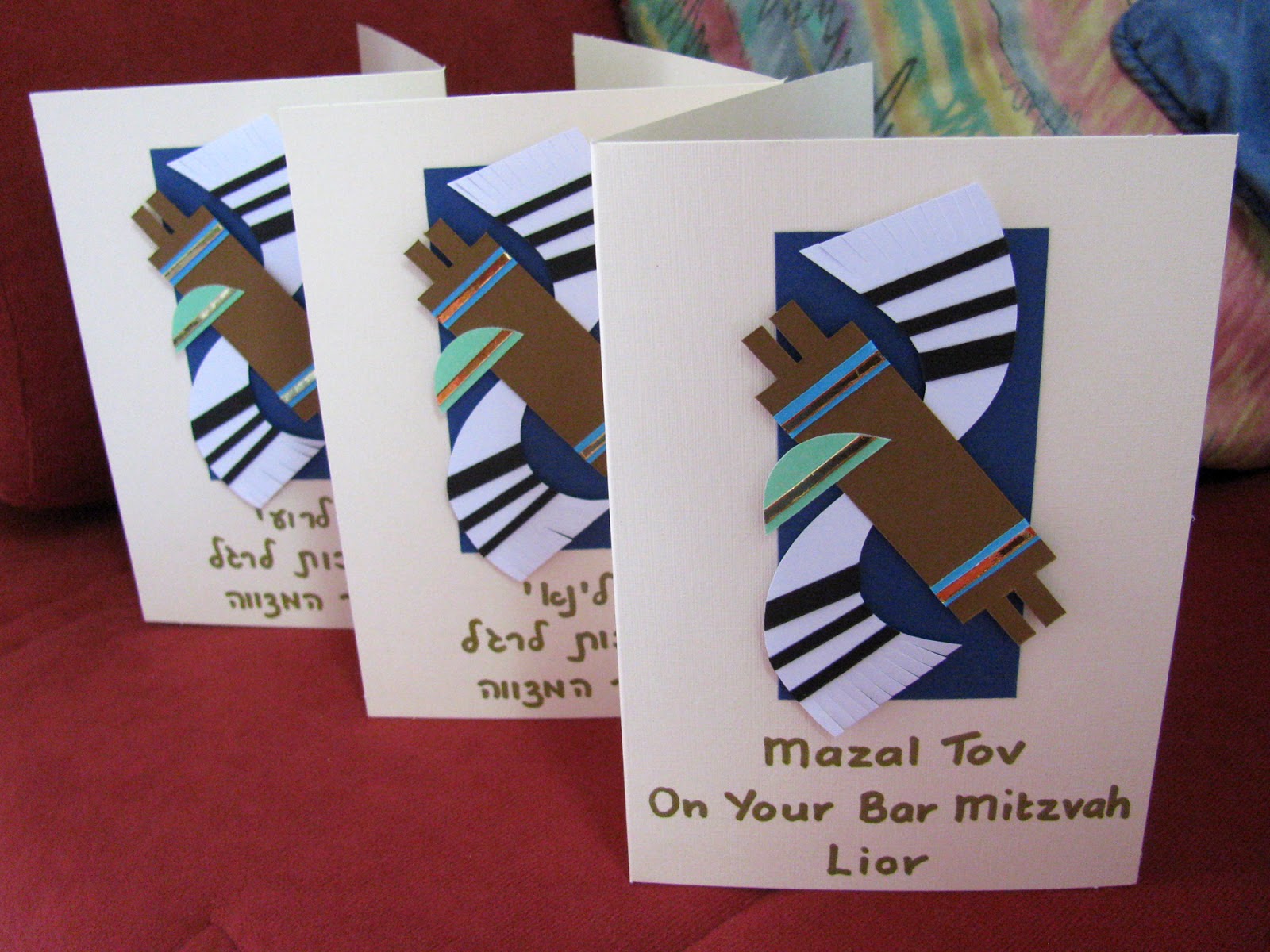 There is no instruction in the Torah to wear a head-covering, or kippa (shown in red on the top card and green on these cards). It is believed that the custom of covering your head evolved from the clothing worn by the High Priest in the days when the Temple in Jerusalem stood. Originally the kippa was worn for prayer, religious study, and while eating, but by the 1500's it was accepted among Jews as proper dress throughout the day, as a means of showing respect for God.
Today some Jews cover their heads throughout the day; others while praying, studying holy texts, and eating. In Orthodox synagogues, only men are required to cover their heads.
The last items, pictured only on my son's card, are tefillin. Tefillin are cubic black leather boxes with leather straps containing four hand-written texts from the Bible, which Orthodox Jewish men wear on their head and their arm during weekday morning prayer. Jewish boys start wearing tefillin just before their Bar Mitzvah. 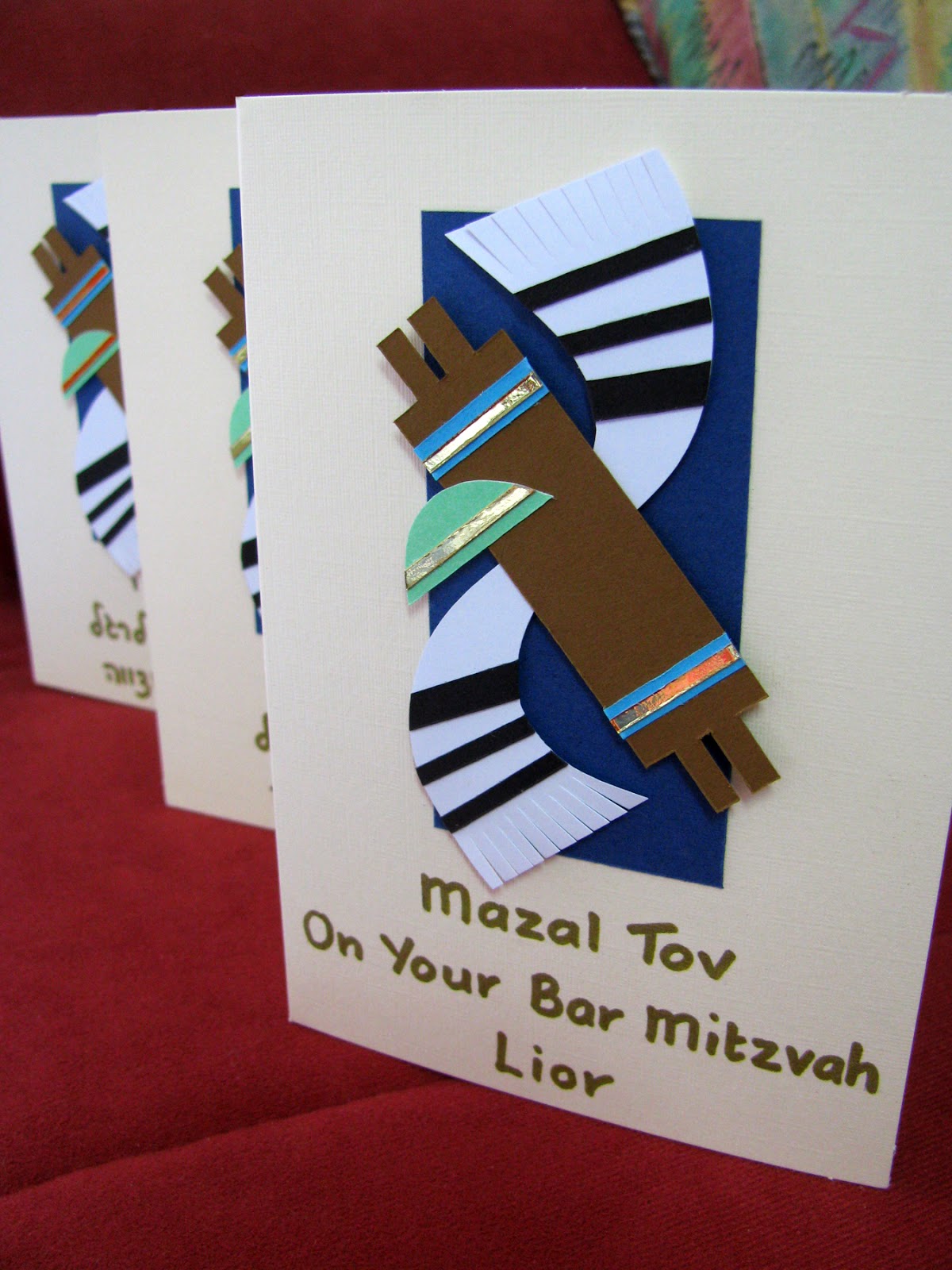 Posted by Handmade in Israel at 10:13 1 comments 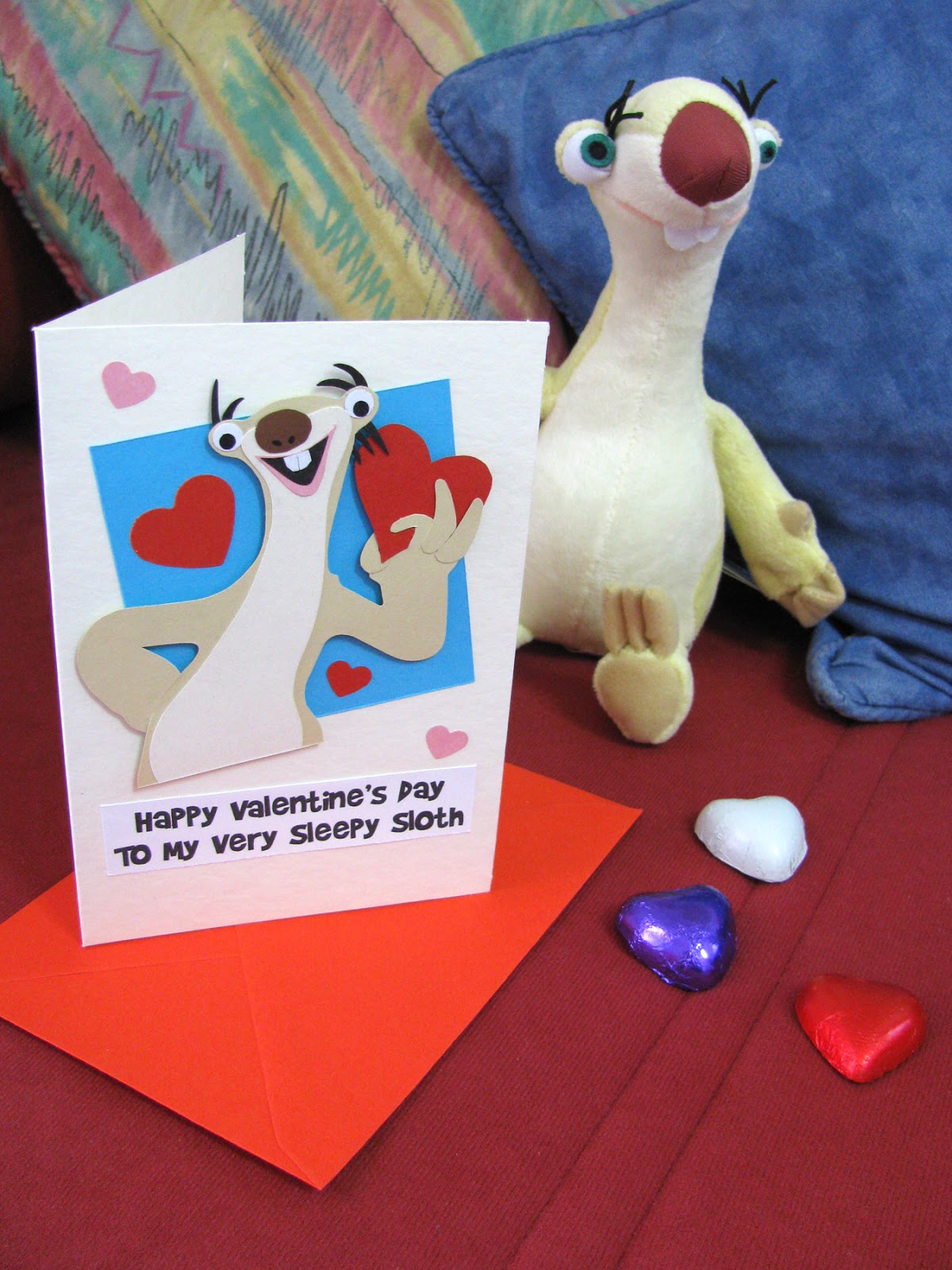 I could have written about this card in time for Valentine's Day but I wanted, no needed, to ask Mister Handmade in Israel's permission before I showed it to the world. It does rather poke fun at him! Fortunately he has a good sense of humour and he loved the card.
Mister Handmade in Israel loves to sleep. I have made cards for him on that theme before. The kids particularly liked this one and still giggle when they talk about it. Sloth's love to sleep too. When our boys were young we used to read them a sweet book called "The Very Sleepy Sloth". Sloth sleeps a lot. His favourite thing to do is to take a nice, peaceful nap. But the other jungle animals are very busy and very noisy. Kangaroo is always jumping on her trampoline; Elephant is always lifting weights. However, Monkey finds out the hard way that he’s no good at lifting weights, and Elephant can’t jump on the trampoline very well. The animals learn that everyone does something best - and Sloth’s best talent is sleeping!
It's one of Mister Handmade in Israel's talents too, so a sleepy sloth, based on Sid the ground sloth from the film Ice Age, a family favourite, went on to his Valentine's card. 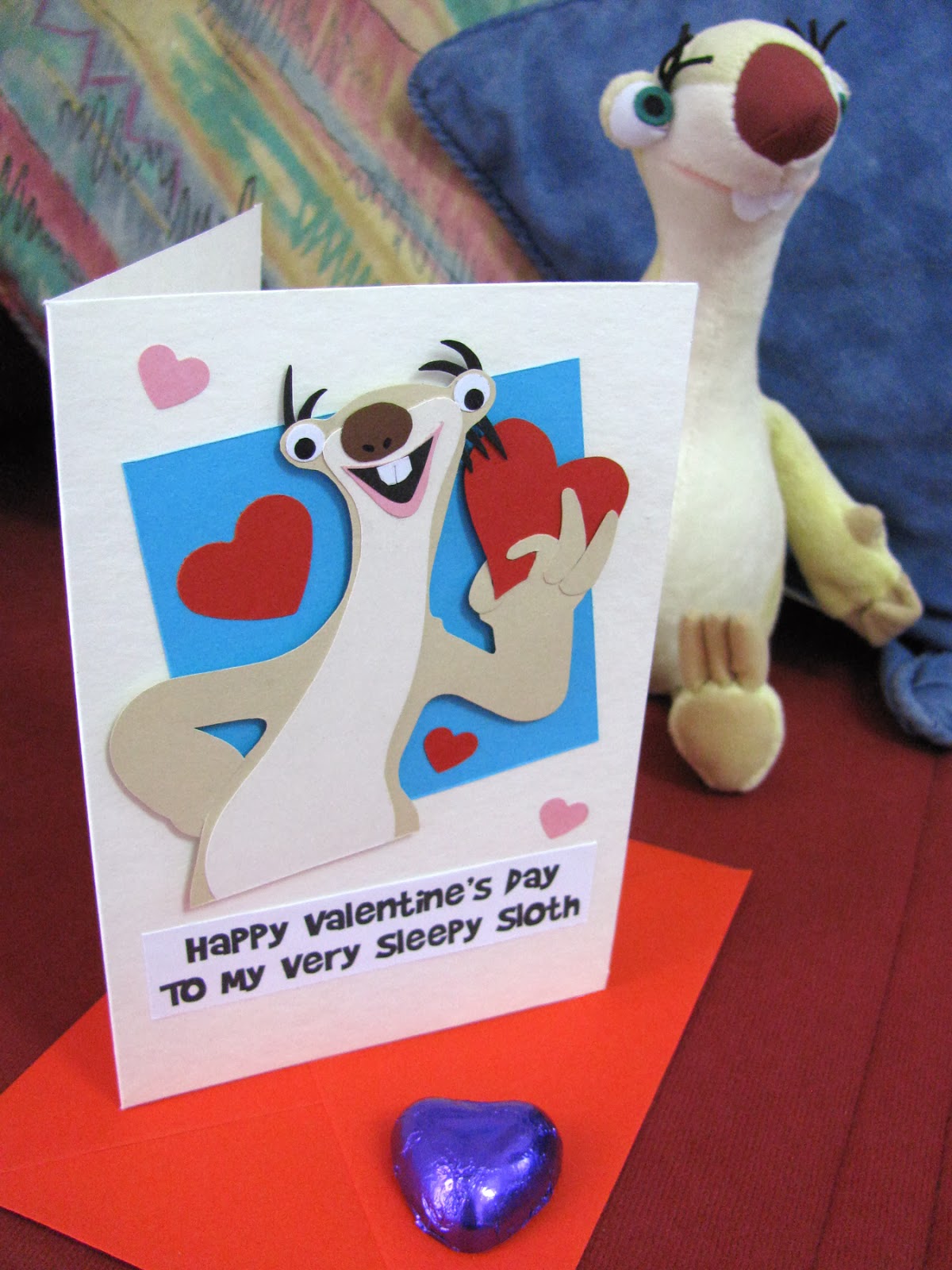 It may not have been the most romantic card ever but I did try to make it a little bit lovey-dovey by adding a few red and pink love hearts. Fortunately Mister Handmade in Israel's Valentine's gestures were far more romantic than mine... 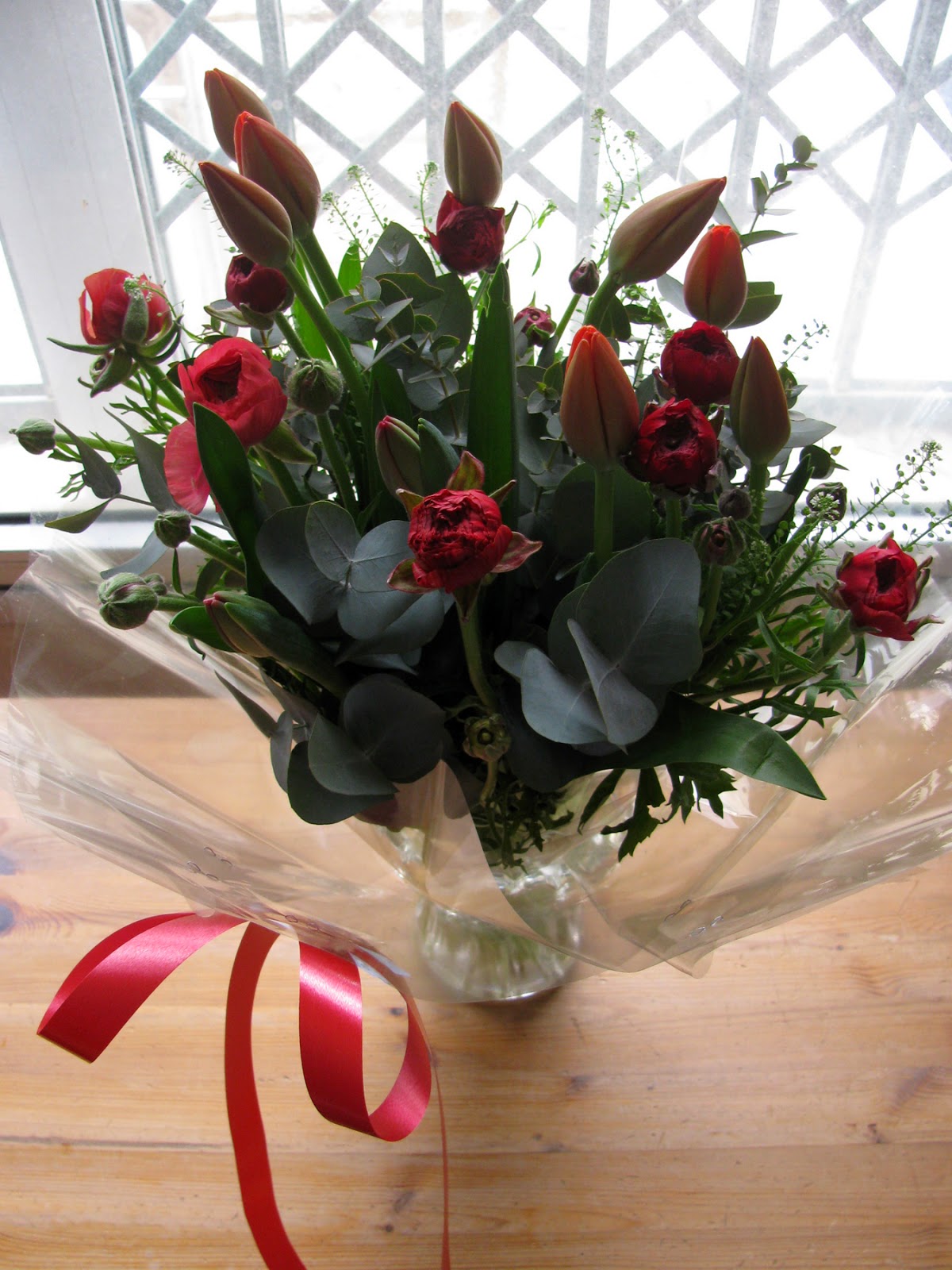 Posted by Handmade in Israel at 08:07 2 comments

The Book Depository is running a bookmark design competition with the winning 16 designs being printed and sent to their customers worldwide.

Here are my entries to that competition.

You can view all entries over at their Flickr group.
Posted by Handmade in Israel at 08:00 4 comments 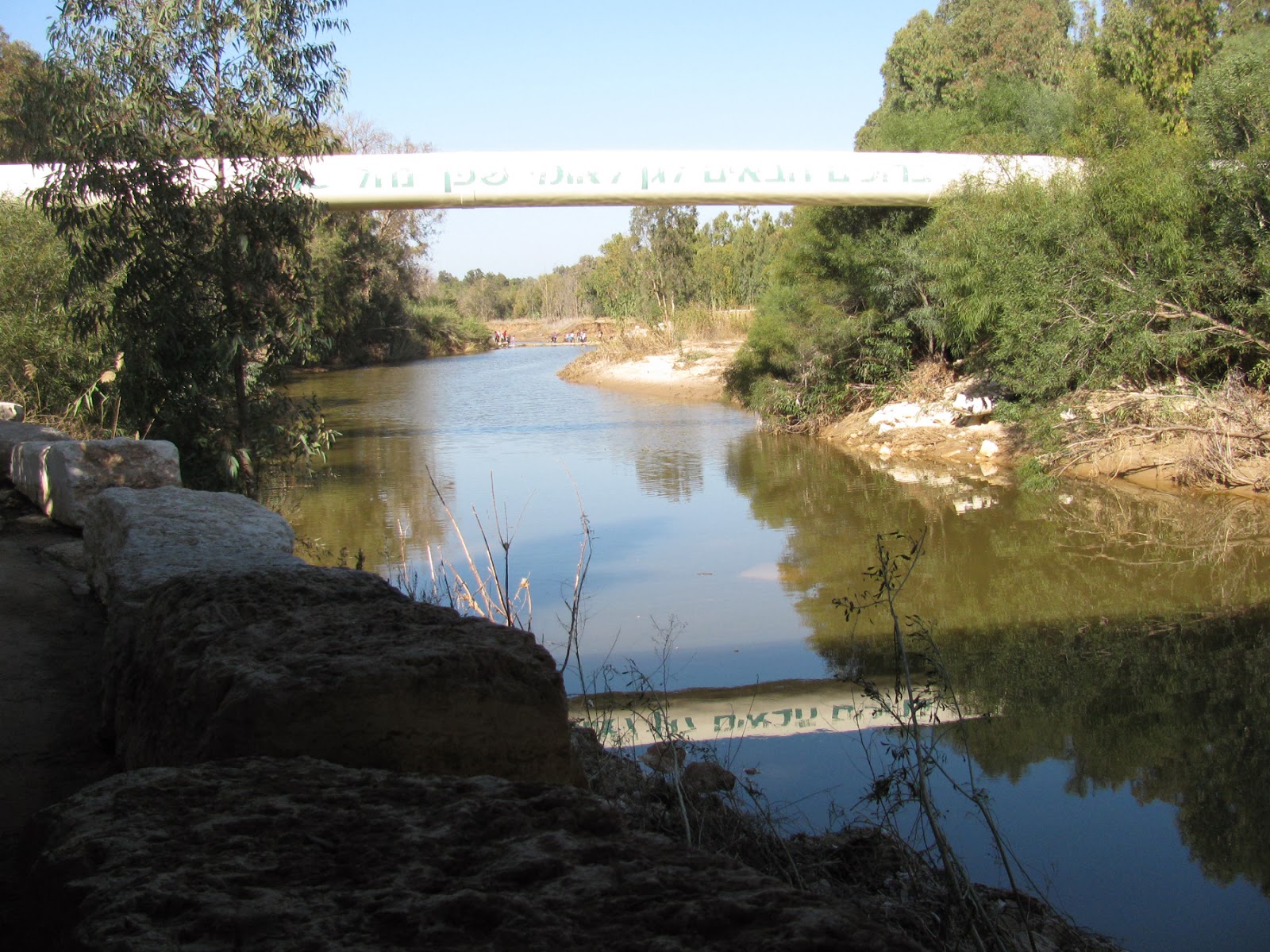 The kids love going to the beach. I am less keen. Actually, I really do love the beach when I am there, but if I could leave all that stuff called sand on the beach and not bring it all home with me, then it would make the experience all the more fun for me! Having said that, I recently read about a hike along the Soreq River, starting on a paved footpath and leading onto a beautiful observation point looking out towards the sea, and I was keen to go. Somehow the combination of a river, Eucalyptus trees, birds and then the beach, sounded good. 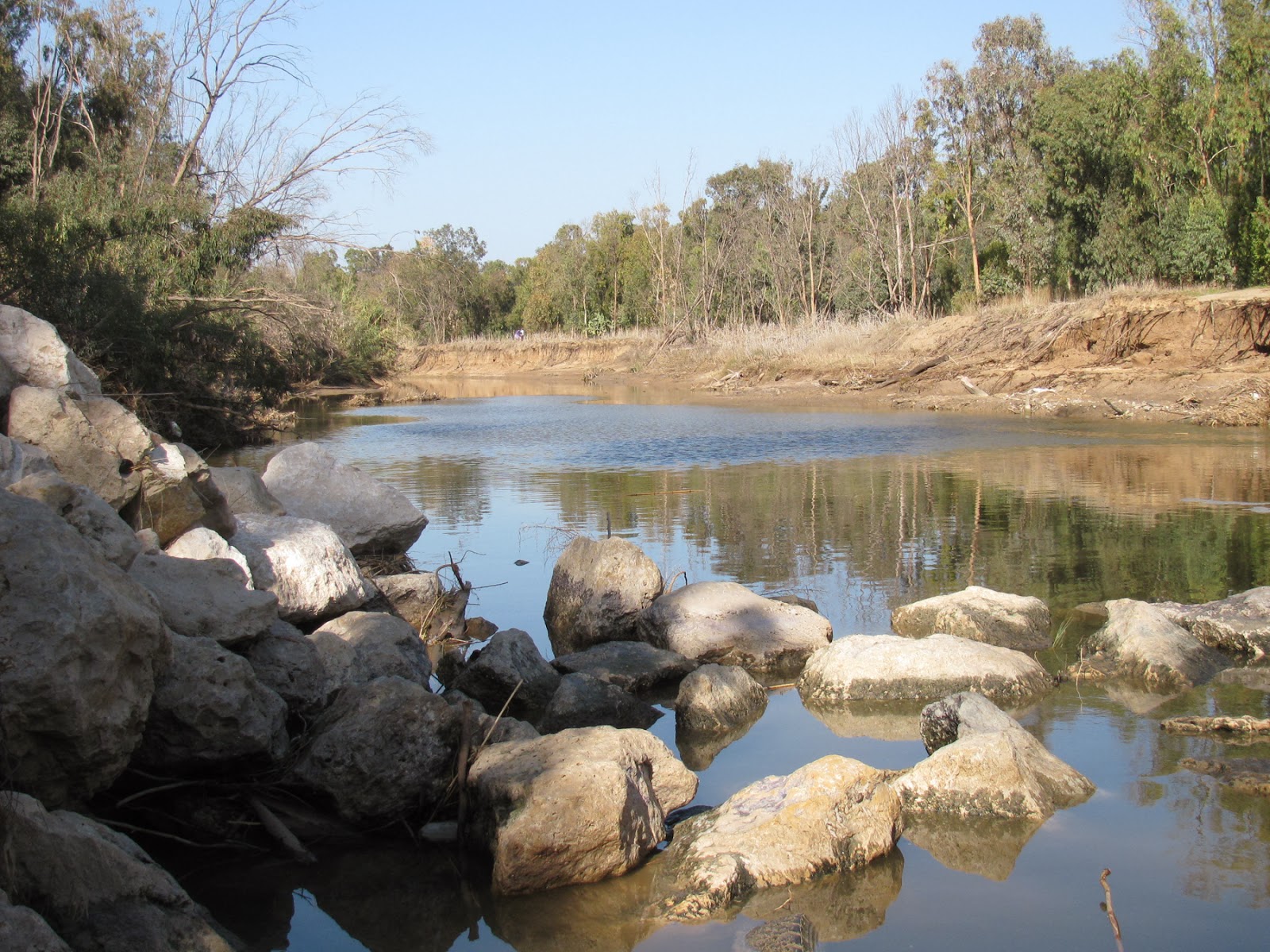 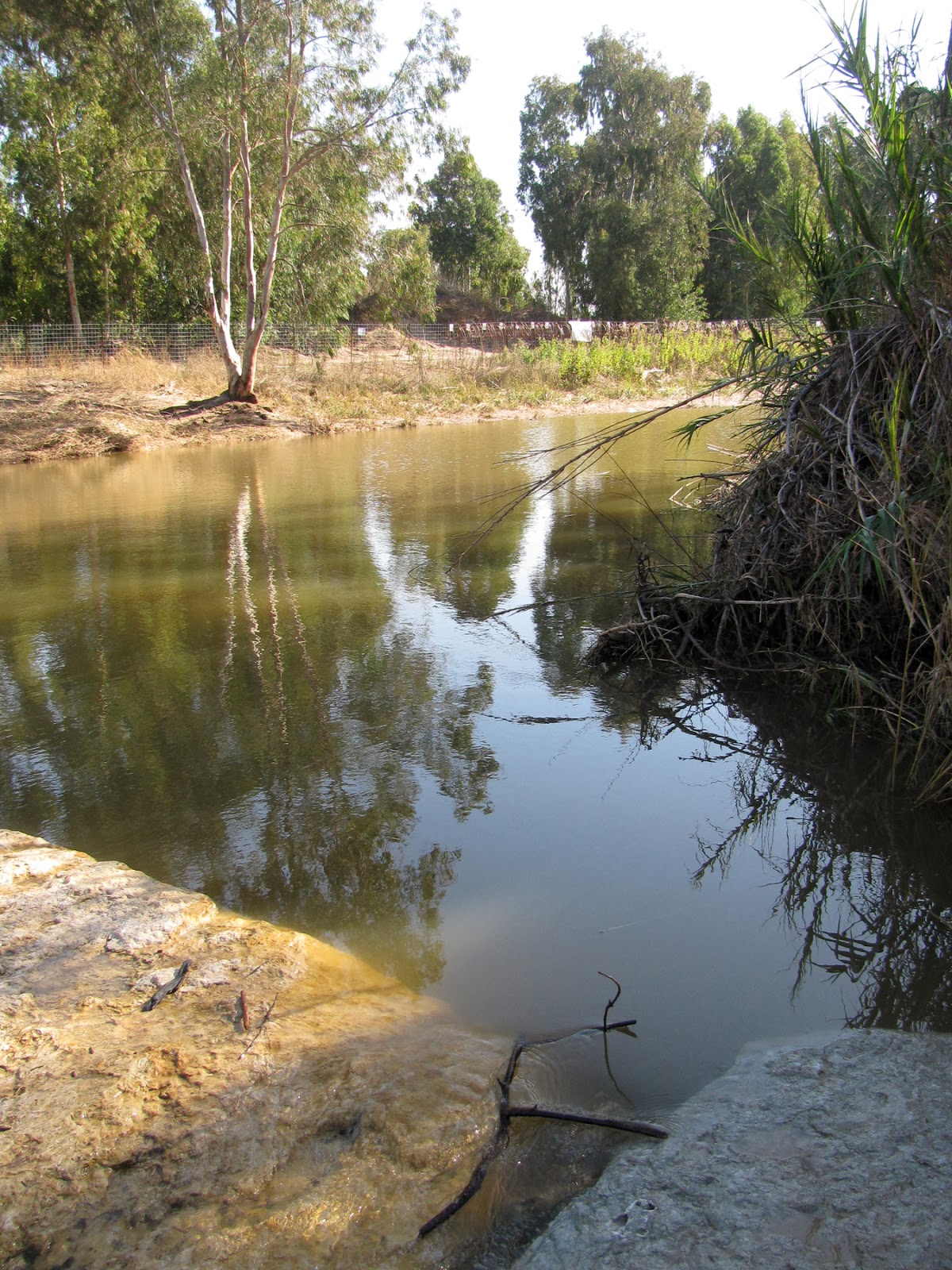 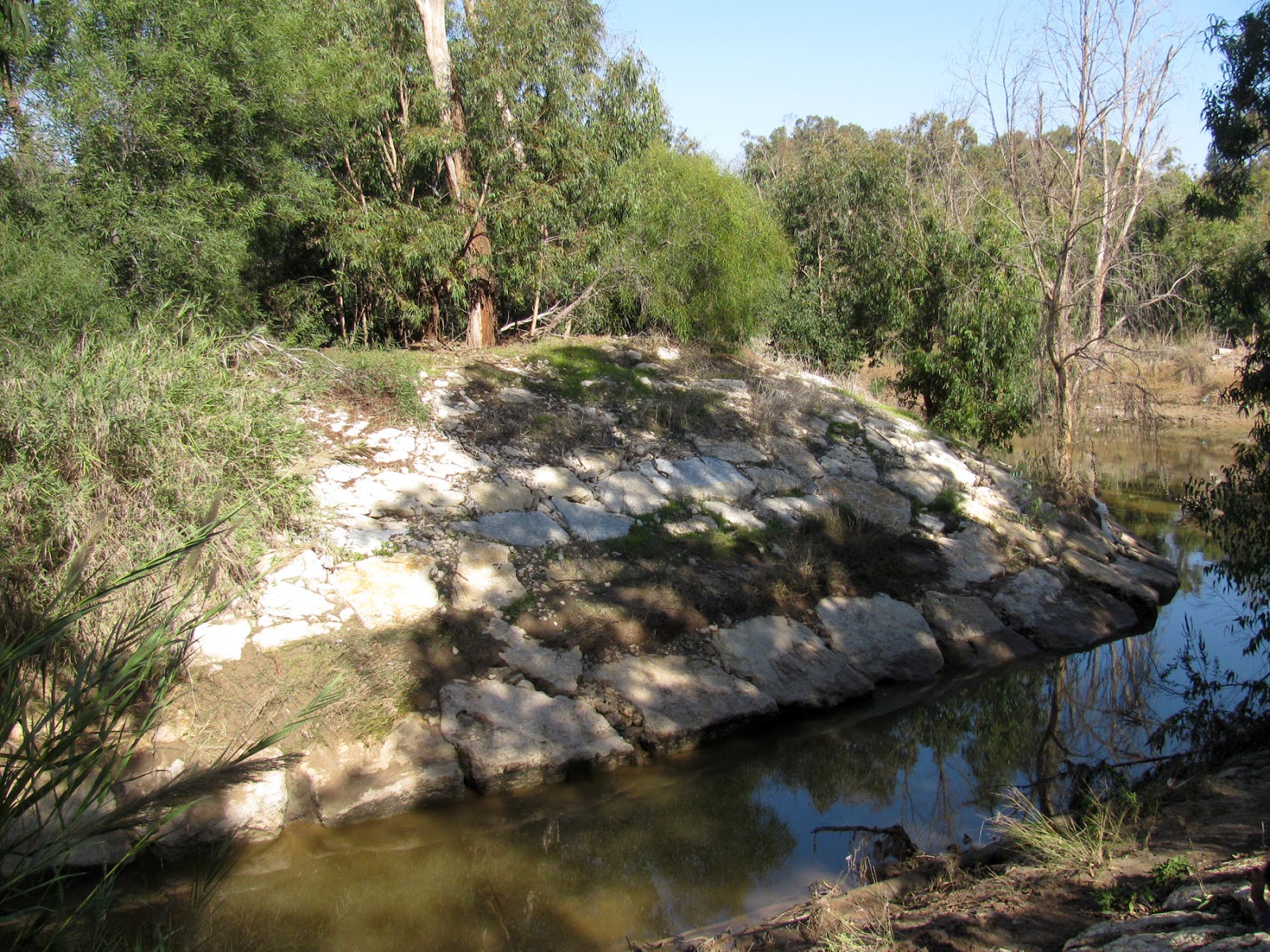 The Soreq River originates in the Jerusalem Mountains and flows for 70 km, through Beit Shemesh and the Judean Plains, until it spills into the Mediterranean Sea north of Kibbutz Palmachim. Our short hike began with a walk along the riverside footpath and lead towards the Secher HaSela'im (the Stone Dam) and I HaTzabim (Tortoise Island), above. The Israel Nature and Parks Authority built this island in 2002 for the population of Caspian turtles which live in this section of the river. The turtles spend most of their time in the water - and they did indeed hide from us on the day we visited -  but from time to time they like to sunbathe along the island's banks. 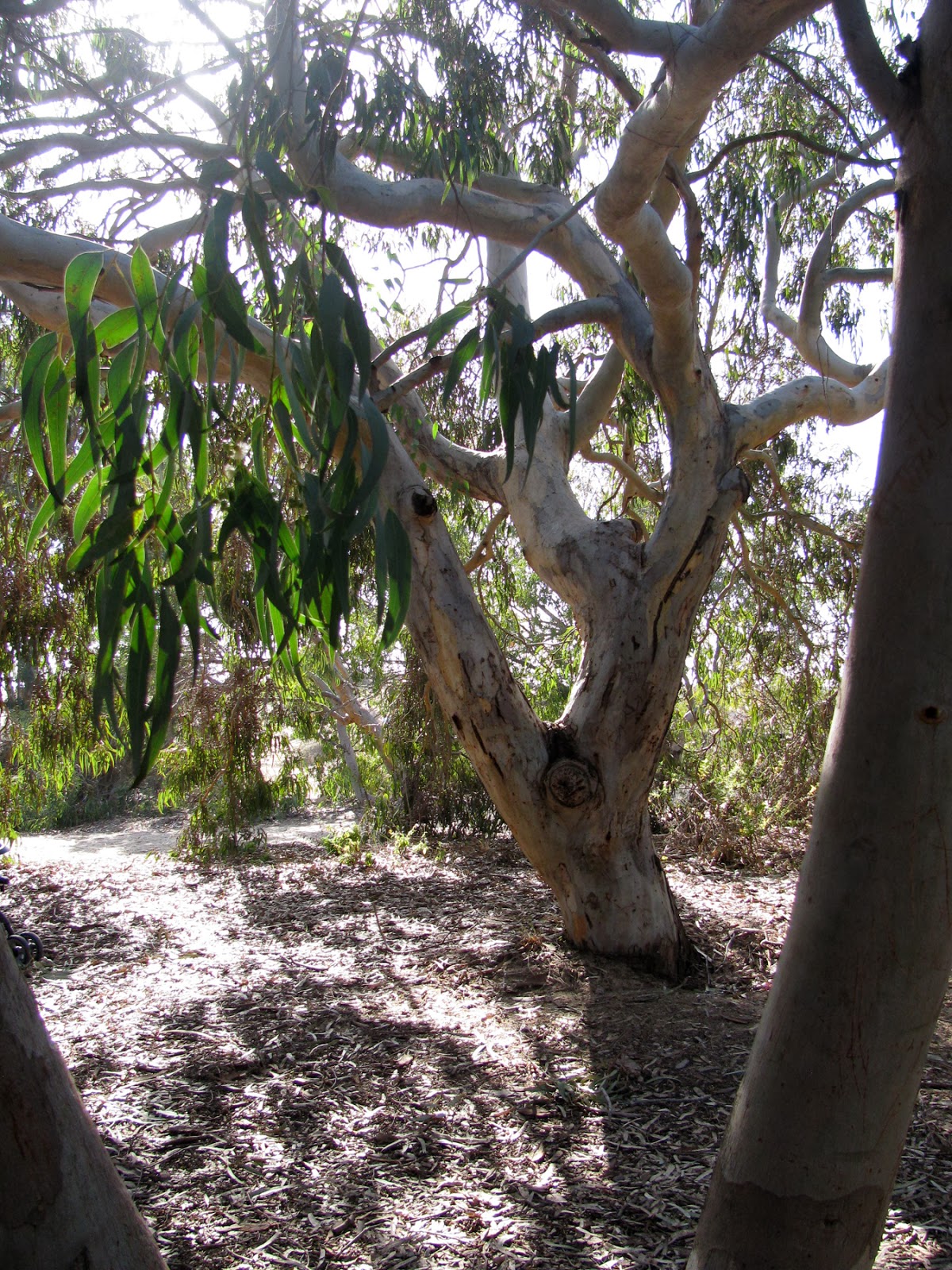 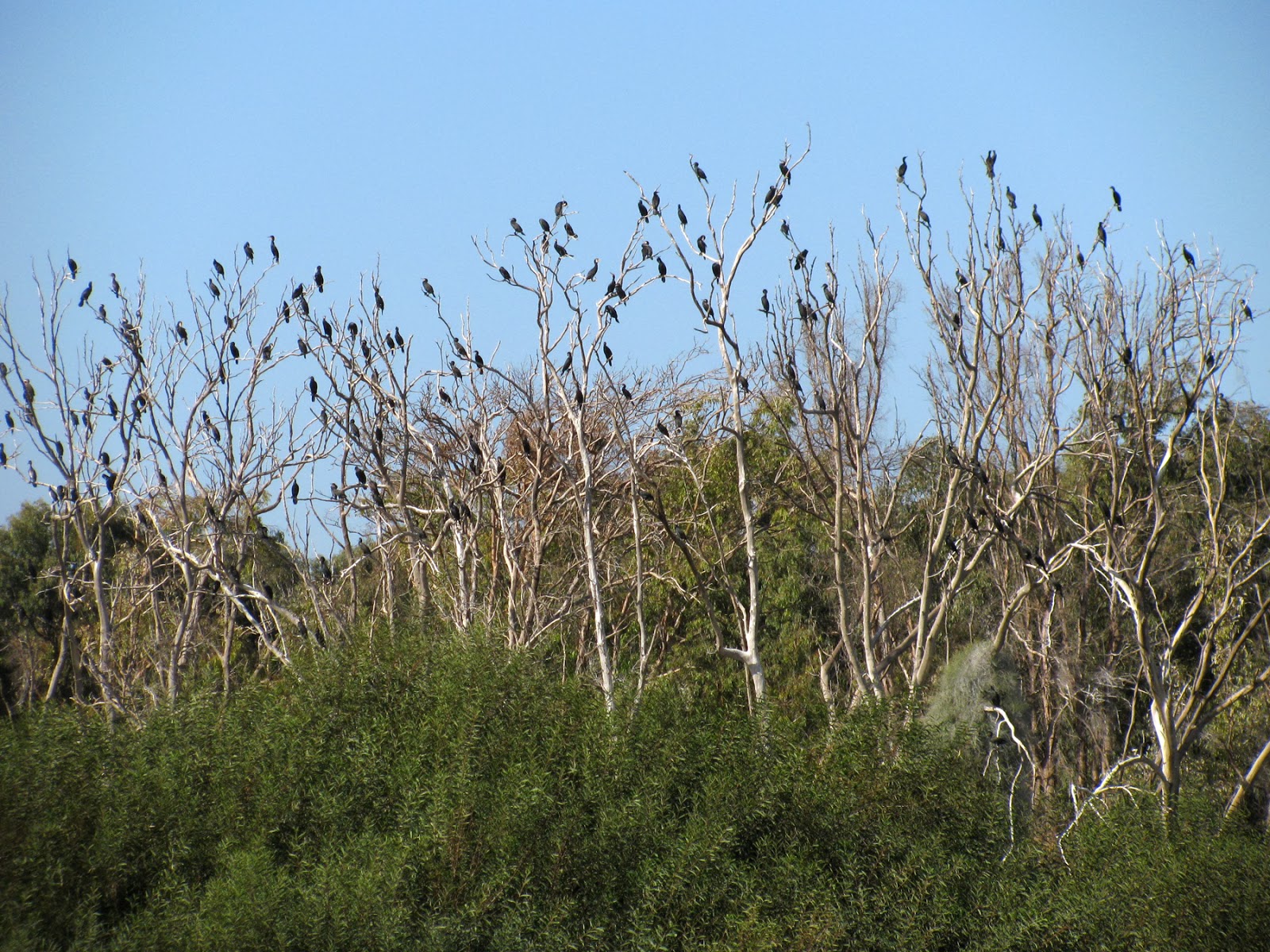 We continued to follow the marked footpath to a Cormorant outlook, Tatzpit HaCormoranim. The Great Cormorant is a common winter bird in northern and western Israel, and great colonies of them nest in the Eucalyptus trees along the banks of the Soreq River. They feed on fish which they catch by diving into the water, and leave the trees covered in white from all their droppings! 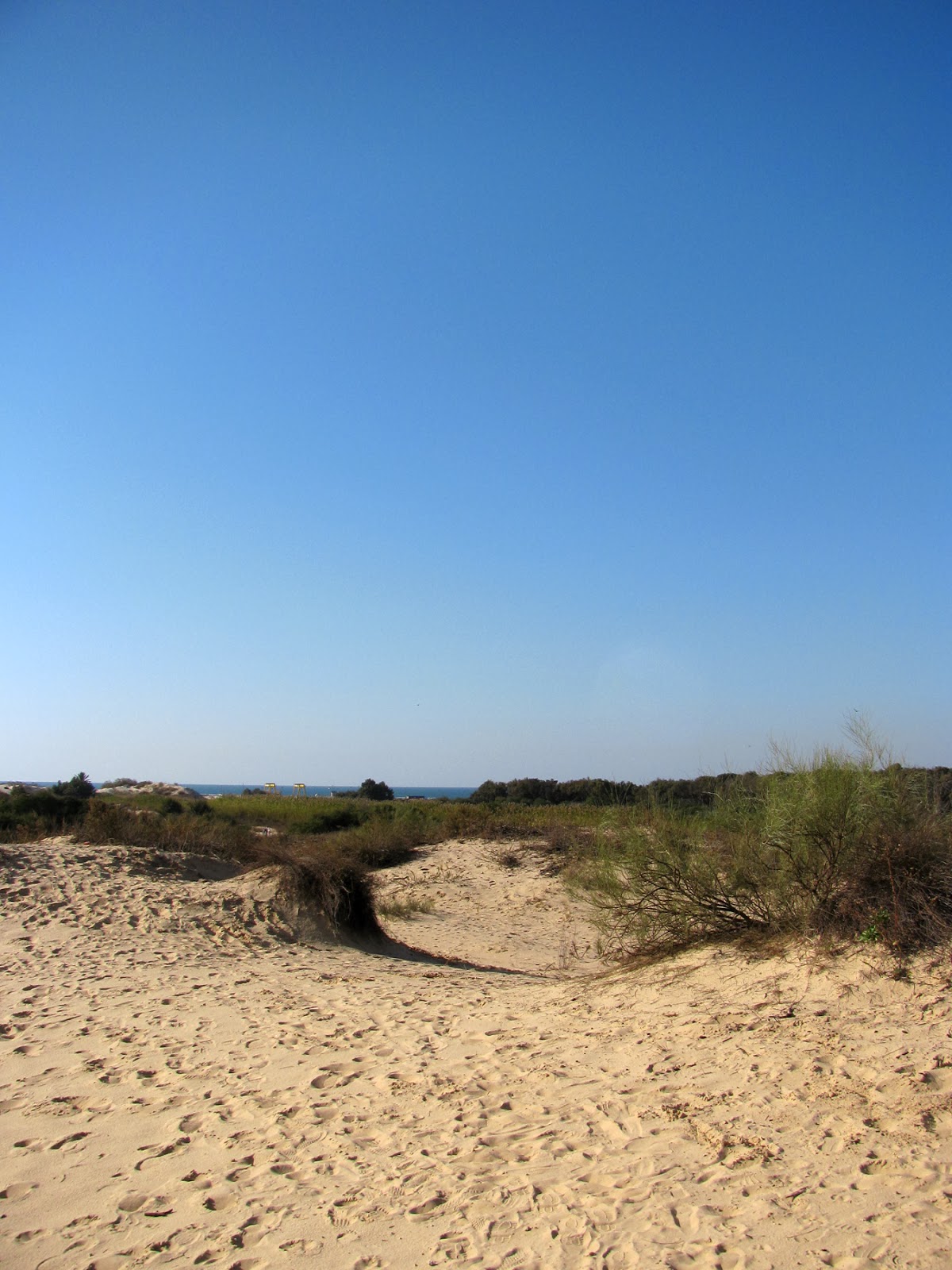 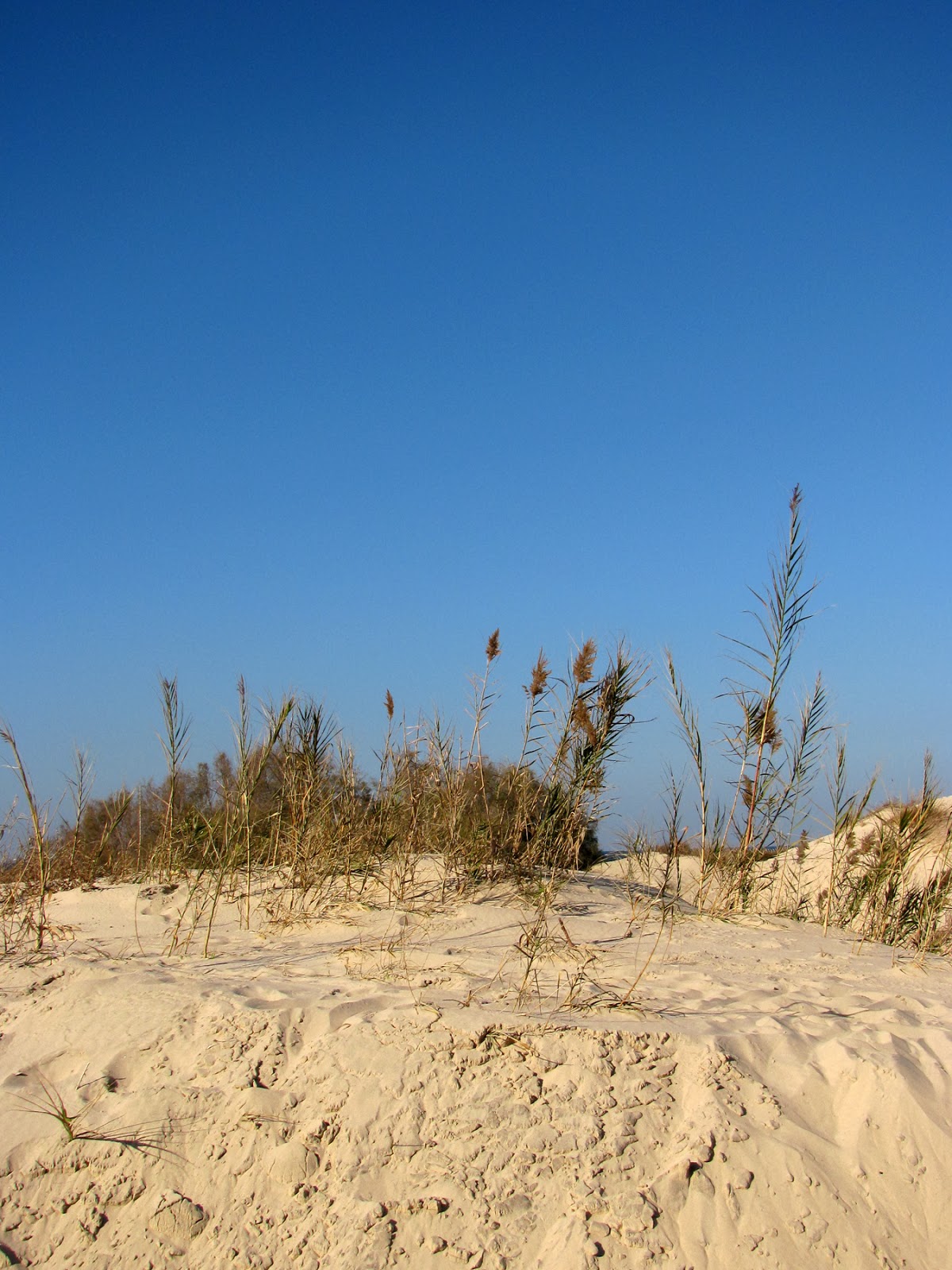 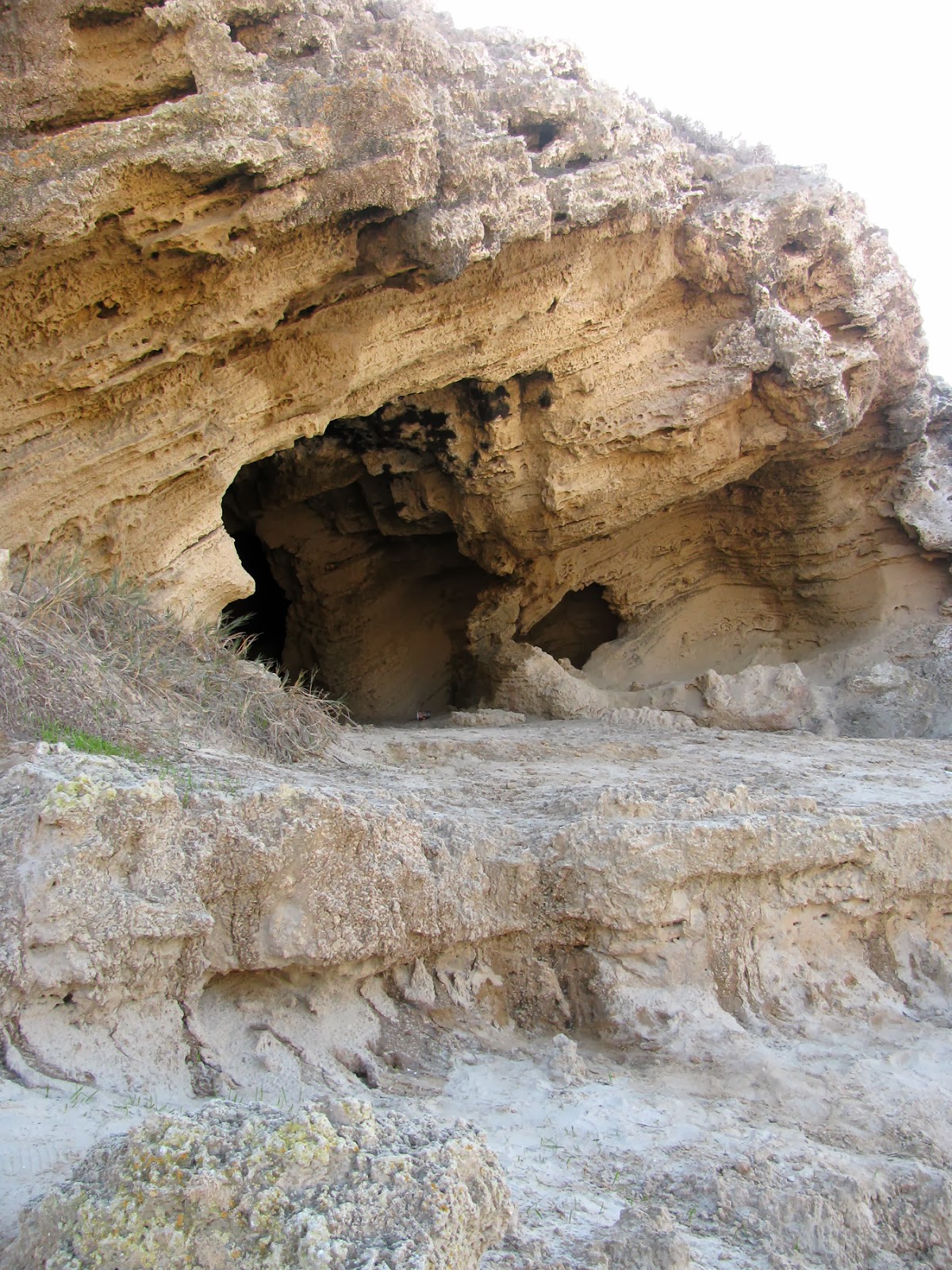 Our riverside hike had now become a stroll on the beach. The footpath, which had turned sandy, continued west toward a kurkar ridge and past quarried caves, though we were not allowed to enter the caves for fear of them collapsing.
The view of the sea right in front of us was spectacular. The sky was blue. The company was good. My friend had even remembered to bring along hot soup!
We headed back the way we had come, past the Cormorants and the Eucalyptus trees and I decided there and then that I could really learn to love the beach. 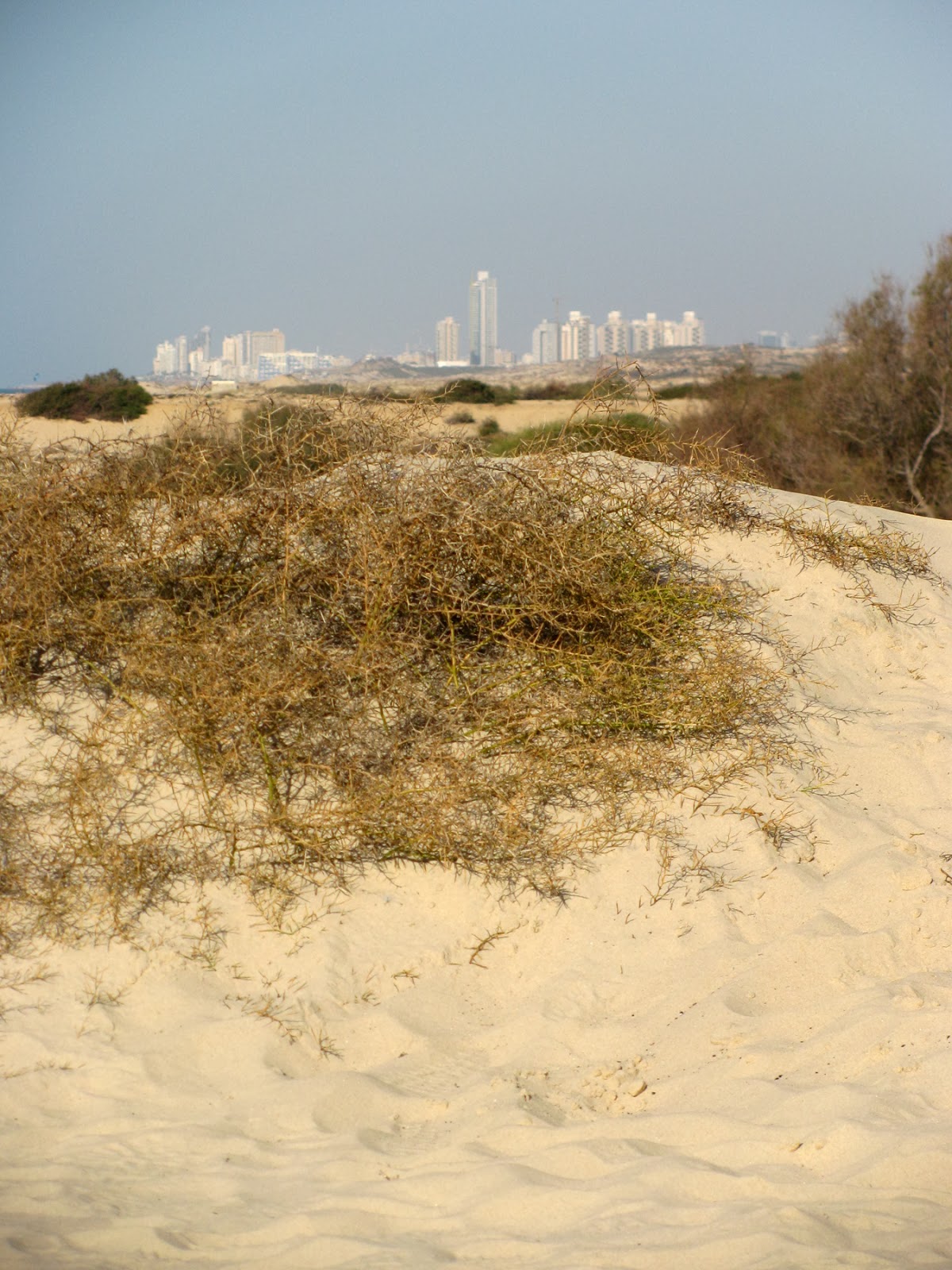 Posted by Handmade in Israel at 16:01 1 comments 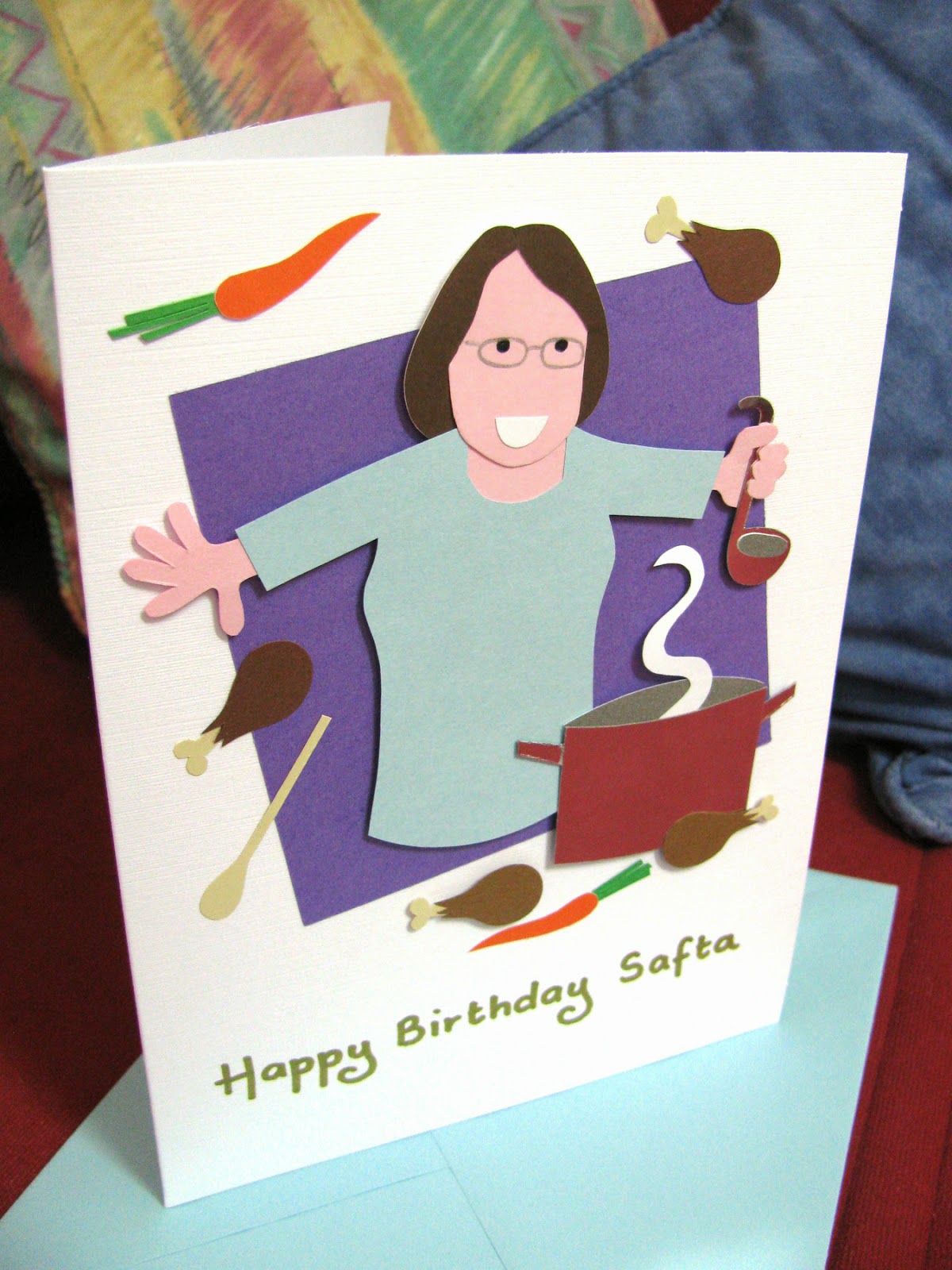 Not long ago a friend and regular customer asked me to make a birthday card for her Mother-in-law. She wanted me to show Safta (the Hebrew word for Grandmother) making her famous chicken soup in her big silver cooking pot. Now, it just so happens that we had eaten a Shabbat meal with these particular friends not long before and Safta was there. Making a little papercut portrait of her was pretty easy since I could remember exactly what she looked like.
My friend was so thrilled with the birthday card that she posted it on her Facebook page. "This is such an amazing card I just had to share it!" she wrote. "It's so Safta!". Another family member commented saying that it was "a brilliantly accurate card". Apparently Safta is left-handed, so I had even put the soup ladle in the correct hand.
I think they liked it. 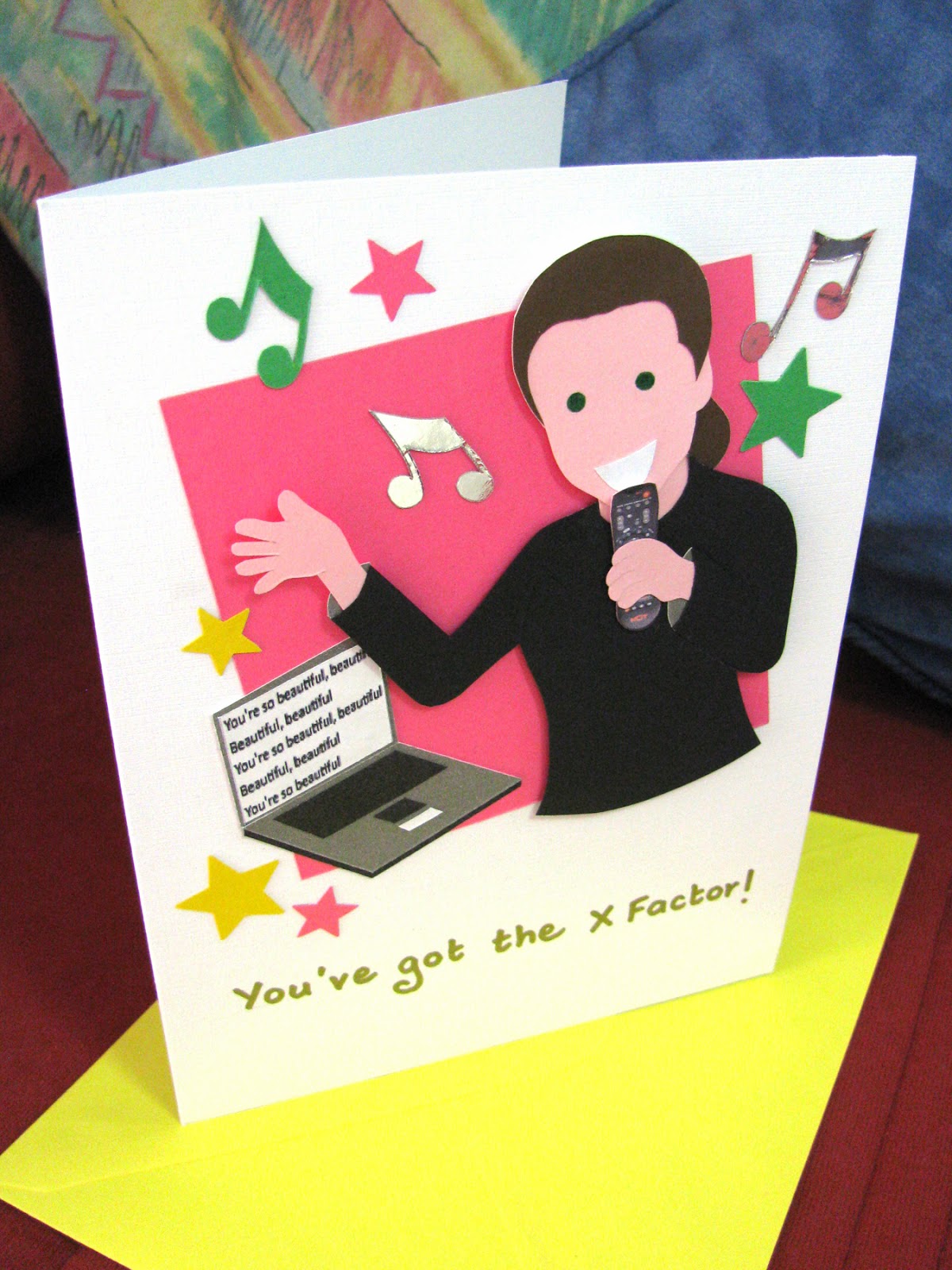 Another local customer asked me for a card for her daughter who loves karaoke. Apparently she always uses the HOT TV remote control as her microphone, so Mum asked me to show her singing whilst using her 'mic'. The words to her favourite song are on the laptop. I was even told which part of the song to put up there! Mum also wanted to make sure that her daughter's eyes were coloured very green. Oh, and I tried to match the dark red colour dye of her hair. Really I did. 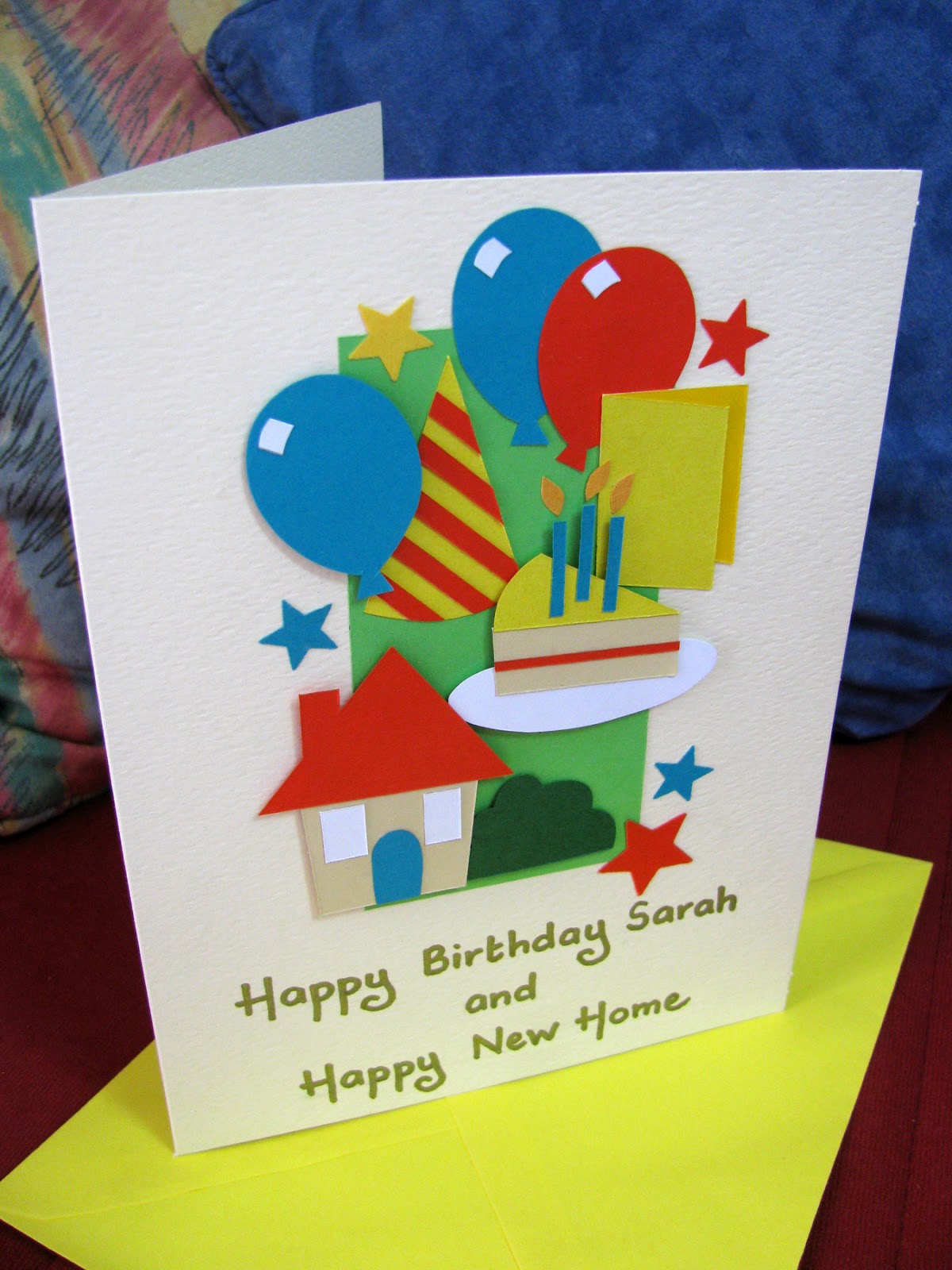 Finally, this was the result of a request for a joint birthday and new home card. I popped a sweet little red-roofed house into the foreground of the card and added some birthday stuff in the background. You can't go wrong with balloons and cake on a birthday card.
Posted by Handmade in Israel at 08:00 2 comments