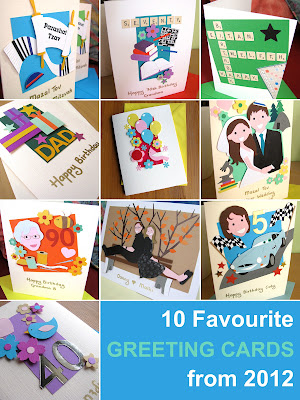 Tonight we will celebrate the start of a brand new year. 2012 has been a productive year for me and so I thought it would be fun to collect together some of my personal favourites from this past year. As you can see from these mosaics, I am making almost as many guest books as customised cards these days! Well, almost.

Once again, many, many thanks to those of you who have visited 'Handmade in Israel' in 2012. I am always delighted to receive your encouraging comments and support, and hope you will continue to visit in 2013 as I share the coming year's papercut designs and a few of my adventures in Israel. 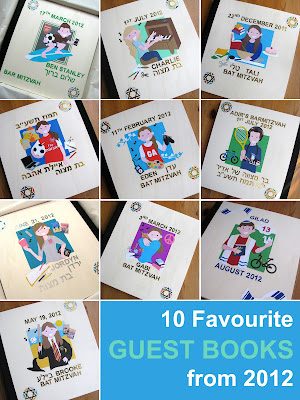 Don't forget that you can subscribe to my blog, and follow me on Facebook, Twitter and Pinterest. Oh, and please pop by my shop now and then to see what is new there!
Wishing you a wonderful, happy and colourful New Year's Eve. See you next year!
Posted by Handmade in Israel at 08:30 5 comments

A customer recently asked me to make a 40th birthday card for her friend, Fiona. This particular customer knows how I work and e-mailed me a couple of snaps of her friend, along with a list of her hobbies. She told me that Fiona normally wears a bandanna, with some of her blond hair showing. She is a doctor, and at the moment is into cycling, as well as being a big iPod/iPad fan. Fiona also loves the deal-of-the-day website, Groupon and is always getting great deals on purchases. Finally, I was told that she enjoys exotic overseas travel and has been to China, Russia and Thailand on cruises and by air. Lucky girl! 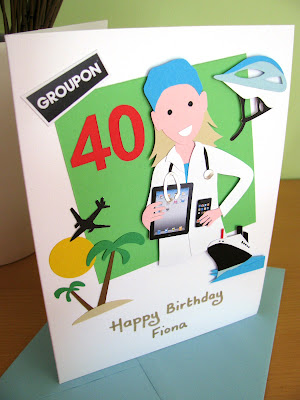 Though there was a lot to work with, it was relatively easy to incorporate all of those hobbies and interests. I showed Fiona in her white doctors coat, with a stethoscope around her neck. Her hair is partly covered by a bandanna and her hands are full with her iPod and iPad!
In the background I added the Groupon logo, a bicycle helmet and, to illustrate her passion for travel, I crafted some palm trees, a big yellow sun with a plane passing over it, and an ocean liner to cover those cruises! Finally I added a big red number 40 to mark her special birthday.
A couple of weeks later my customer let me know that the card had been very well received. The birthday girl, and her family, really liked it! 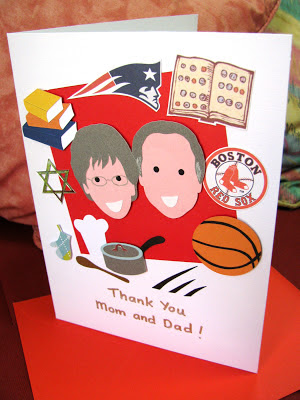 Back in July I made a birthday card for a baseball fan from his then-fiance. It seems that the card was very well received because I was subsequently asked to make some 'Thank You' cards for the newly married couple's parents after their wedding.
This first card, above, was for the parents of the bride. Her Dad collects coins, and enjoys playing basketball, and watching baseball - The Boston Red Sox - and football - the New England Patriots. Mum loves to cook, enjoys reading and is very involved in Jewish leadership at her synagogue.
I think I got all of their hobbies and interests on there! 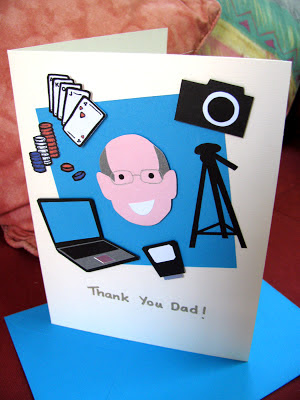 The second card, above, was for the groom's father. His interests include computers, photography and playing a little poker. I popped a laptop computer onto the card, along with a camera and some photography equipment. Finally I added some playing cards and some poker chips.
I hope they all enjoyed seeing themselves crafted out of paper!
Posted by Handmade in Israel at 09:00 4 comments

When the Red, Red Robin 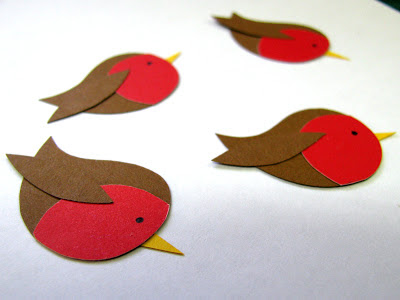 When the red, red robin comes bob, bob, bobbin' along, along...
Actually the song doesn't so much remind me of Christmas, but rather my Dad's favourite rugby league team, Hull Kingston Rovers. I have memories of Dad singing this song over and over again back in the 80's. Hull KR's nickname is 'The Robins', which originates from their traditional playing colours of red and white. Whenever fans wanted to show their appreciation to the club they would chant this song. They probably still do. 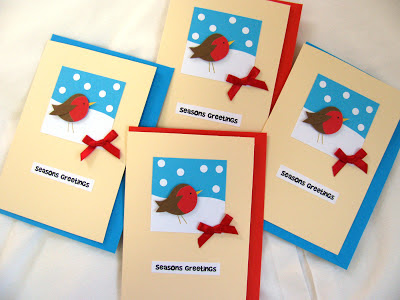 Rather than the rugby pitch, my robins were headed for these Christmas cards. I live in an area that does not really acknowledge Christmas. I don't see any Christmas paraphernalia on the street nor watch the seasonal commercials on the television. However I do have a card business and people, including myself, still need Christmas cards. This year the robins made it onto the cards. 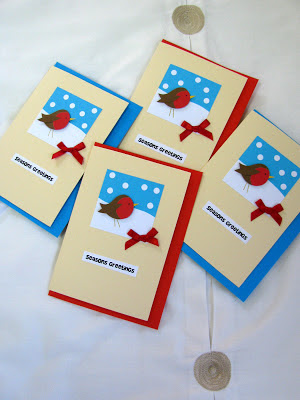 So, happy holidays to you all. I wish you a merry and peaceful Christmas, and a wonderful new year.
Looking forward to a crafty and creative 2013.
Lisa x
Posted by Handmade in Israel at 09:00 4 comments 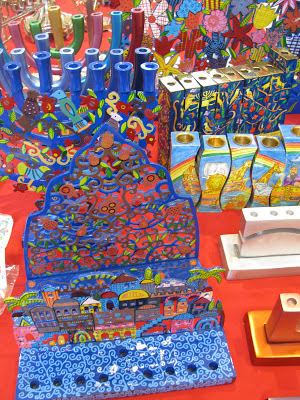 I know that in many parts of the world folk are stopping work and winding down for Christmas. It's a very different story over here though! We celebrated Hanukkah, the Jewish Festival of Lights, last week, with candle lighting, presents, yummy fried food and a little travel too. Now the boys have gone back to school and my Dad, who has been here for a visit, has returned to the UK. Does all of this explain my short absence since my last post? 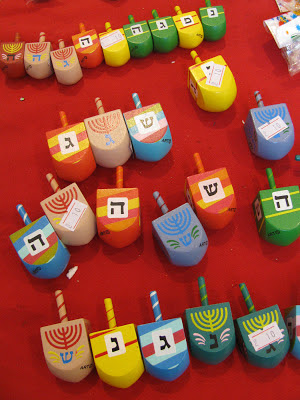 Hanukkah is celebrated for eight days and marks the victory of a group of Jews called the Maccabees over the Syrian Greeks, the most powerful army of the ancient world. At the end of a three year war the Maccabees recaptured Jerusalem and lit the eight-branched candelabrum, the Menorah, in the rededicated Holy Temple.
Nowadays Hanukkah is celebrated by lighting one candle on the Hanukkiah (an eight-branched candelabrum like the one in the temple) each day. Games of dreidel are played as a way of helping children to remember the great miracle of one small jar of oil found in the temple staying alight for eight days. The four letters on the dreidel form an acronym that means 'A great miracle happened here.'
We eat potato pancakes, latkes, and deep-fried doughnuts, sufganiot, once again to remind us of the miracle of the oil and the candles that burned for eight days. 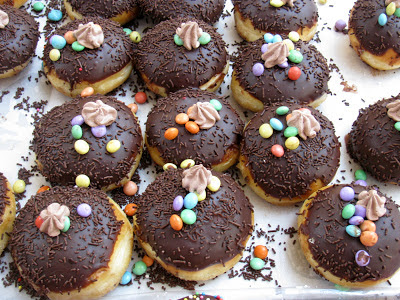 In between all the candle lighting and doughnut eating, we escaped for a few days away up north. The weather was kind to us and we visited some beautiful places in the Golan Heights and the Galilee. We made a return trip to my most favourite place in Israel, the Agamon Lake in the Hula Valley, and I have plenty of gorgeous photos to show you in another post.
For now all that remains is for me to wish those of you celebrating, a very Merry Christmas and a Happy New Year. I want to take this opportunity to thank all of you who have supported me and my blogging adventure throughout the year. I have enjoyed composing each and every one of my posts, and appreciate every comment and email that I receive.
Best wishes from Israel,
Lisa x
Posted by Handmade in Israel at 16:34 3 comments 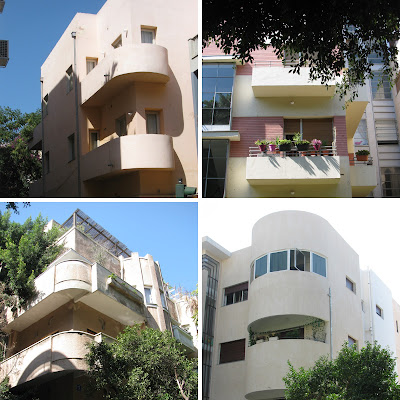 My friend Mandy came to visit us last month. She and I were at art school together so I knew (hoped!) that she'd be happy to join me on a walking tour of the Bauhaus buildings of Tel Aviv, something that the hubby and kids were somewhat reluctant to do.
The lively city of Tel Aviv was declared a World Heritage Site by the United Nations a few years ago because of the predominance of Bauhaus (a style also called International) architecture there. Apparently there are over 4,000 Bauhaus buildings in Tel Aviv (and another 1,500 more slated for preservation and restoration), many of them built in the 1930's by German Jewish architects who immigrated to the British Mandate of Palestine after the rise of the Nazis. 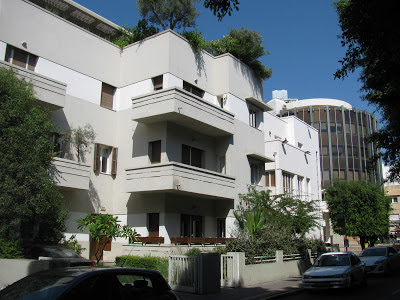 Between the First and Second World Wars there was a great deal of building in Tel Aviv because of the growing waves of immigration from Europe. There was a need to build cheaply and quickly and the Bauhaus style, known for its simple, modern buildings without any kind of ornamentation, fit the bill nicely.
The buildings were adapted to suit the extremes of the Mediterranean and desert climate. They were raised on pillars to allow the wind to blow under and cool the apartments, as well as providing a play area for children, and were painted white to reflect the heat of the city built on sand dunes. Today these white buildings are the source of Tel Aviv's nickname, 'The White City'. 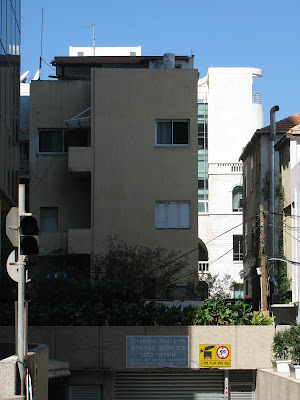 Our guided walking tour focused on the modern architectural styles of the 1930's in one the 'The White City' main areas, Rothschild Boulevard. We looked at flat roofs, so different from the slanted roofs of Europe, which became the place where social events were held, and at balconies of all kinds of shapes and sizes, but located mainly one on top of  the other so that each floor can serve as a ceiling to the balcony beneath it. Walls not only provided privacy but protected against the sun. Large areas of glass that let in the light, a key element of the Bauhaus style in Europe, were replaced with small recessed windows that limited the heat and glare. 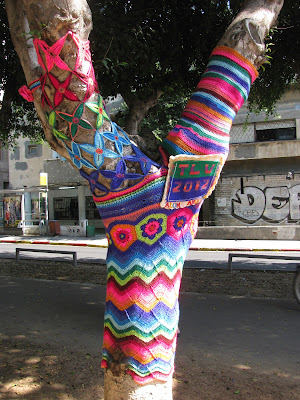 Today many of the Bauhaus buildings have been restored to their former glory, and property developers are rehabilitating many more, often adding on expensive penthouses to enhance the structure. The original architects would probably not have approved because it is a step away from the original minimalist Bauhaus style. However, both the newly built and the restored buildings look wonderful. The café society and communal life of the residents, which grew out of the Bauhaus style of architecture when Tel Aviv’s residents took to the streets as their innovatively designed modern buildings became unbearably hot, continues even today. People were out in force on the day we visited and there was even a little yarn bombing going on around some of the trees on Rothschild Boulevard!
Posted by Handmade in Israel at 09:03 4 comments