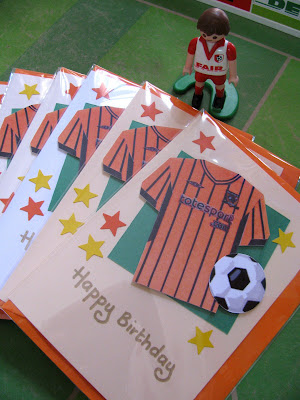 Well, not exactly sports day, but rather it's been a sports month or two over here. I have mentioned before that my family is somewhat sports - well, football - mad, and it does seem to spill over into my work from time to time. I have been creating football cards again, this time the new Hull City shirts, for a small shop I supply in Hull, England, where I am originally from. My Dad was in the shop and happened to tell the owner about the football shirt cards I had
previously made, and thus a new order was received for the black and amber Hull shirts. I am becoming somewhat of an expert on English football team strips! 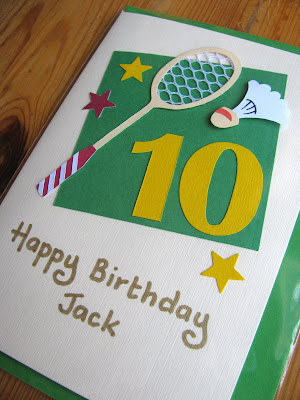 Not a Hull related card this time, but definitely sports related, the card above was requested for a 10 year old badminton fan. I actually received an e-mail from a friend asking me "How are your "shuttlecocks"?". The e-mail was sent from an address I did not immediately recognise, and it took me a moment or two to realise what it was all about! For a split second I thought someone was sending me a rather rude message... 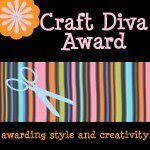 I have mentioned to you before that I am member of the Etsy Greetings Team, a lively team of greeting card artists who collaborate to promote their work through Etsy.com. One of my fellow members, Adore by Nat, recently nominated me for the Craft Diva Award by Debbie of NYPapercrafter. I am always flattered to receive these awards and very much appreciate them being presented to me. Thank you so much.
We are going away for a few days next week, to Israel's southernmost city Eilat, so you won't be hearing from me for a short time. I'll be back very soon, hopefully with some great photos from our little trip away. We are all very excited here!
Posted by Handmade in Israel at 19:22 5 comments 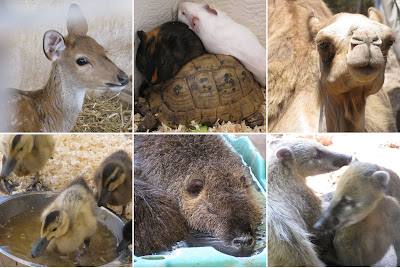 This last weekend we visited the zoo at Kfar HaNo'ar Ben Shemen, the Ben Shemen Youth Village, very near to where we live. It was a small and simple place, but the kids had a good time holding the guinea pigs and ducks, and then jumping on the bouncy castle. A fun few hours was had by all. The youth village was quiet and we saw very few people around, but with some later online reading, I discovered a little more about the place, including the fact that the school has some notable graduates, including Israel's current President, Shimon Peres. 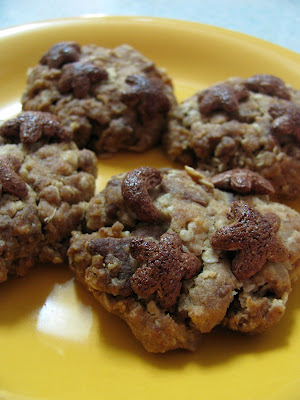 After we returned home I decided to make some Kellogg's Coco Pops Moons and Stars Oaty Cookies. On a recent trip to the supermarket, I promised the boys that if they behaved well and didn't make too much noise, they could choose which cereal we were taking home that day. Thus we ended up with two boxes of sweet chocolaty cereal, a far cry from my usual purchases. On the back of the Moons and Stars cereal box was a nice kid-friendly recipe for the above cookies. They were very easy to make and actually not as sweet as one would expect, considering the cereal that goes into them. They were a little chewy, yummy... and have almost all been eaten! 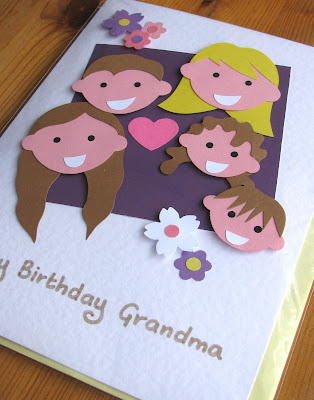 And, just to prove that in between all the summer holiday activities there is still a little crafting going on over here, a friend asked me to create the above card for her Mum's birthday. I illustrated Grandma and her four grandchildren, whom I have made birthday cards for several times before, here and here. Apparently Grandma "was crazy over the card and totally adored it!".
Posted by Handmade in Israel at 12:09 3 comments 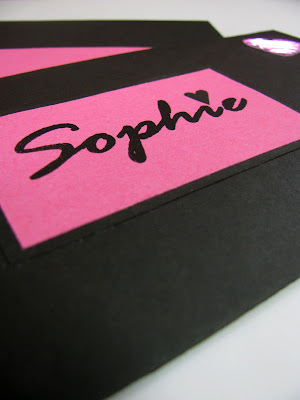 There was a brief change in style at 'Handmade in Israel' recently and I was very pleased with the end result, though it is quite, quite different from my usual work. A friend was travelling back to the UK for her niece's Batmitzvah and showed me the fancy invitation to the celebrations that she had received. She asked me whether I could work with the design in any way and create a card to match the Batmitzvah girl's pink and black theme. I decided to have a go at recreating the invitation, with my own twist on it of course. The end result was this black envelope, with a black card inside and a pull-out personalised pink card inside that. I am told that Sophie was delighted with her card and that everyone loved it. Whilst I love creating my more illustrative style of greeting card, it was a challenge to come up with something so different, and I am very pleased that it was so well received. 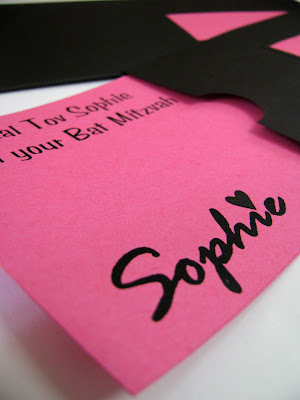 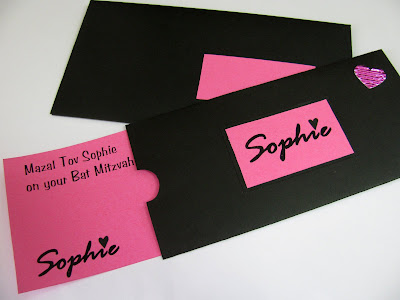 I mentioned in a recent post that I have joined a local women's networking group and that I was due to give a short presentation about my business and the cards and pictures that I create. Thank you for all your kind comments. It went okay. I was very nervous and it is most certainly not my favourite thing to do, but it's done and now I can sit back for a while and listen to what the others have to say. At that very same meeting another participant had a little giveaway and I was the winner! This participant is the web producer for a business called my stone company and the prize, below, was a gorgeous South African Tiger's Eye stone. This Friendship Stone, as the company calls it, is to be passed amongst friends and loved ones as a reminder of their presence and love, and to give the present owner strength as he or she faces their daily challenges. I am enjoying my beautiful stone for the moment but one day will pass it along and hope that it continues to give joy to it's future recipients. Thank you, my stone company, for my lovely prize. 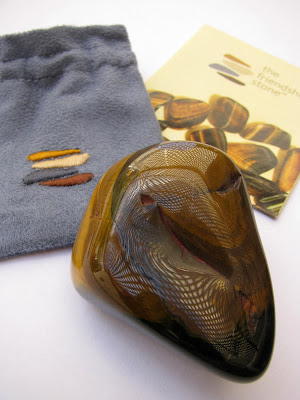 Posted by Handmade in Israel at 16:29 4 comments

Summertime, and the livin' is easy 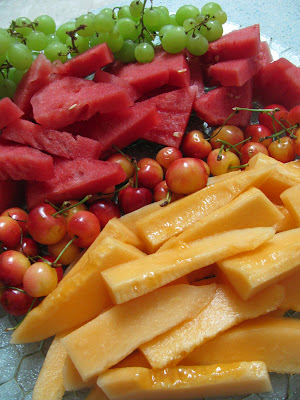 We have definitely slipped into a summer holiday mood over here. The kids are still up and out early at their summer camps every morning, but we have also found time to go swimming and eat plenty of ice pops. I am busy finishing off as much as I can before the real holiday begins, when the boys have finished camp and will be home for almost six weeks. I thought that the photo above summed up the mood perfectly. Delicious summer fruits - watermelon, cherries and grapes - juicy, chilled and ready to be eaten. We had friends over for a barbeque recently and as I prepared this fruit platter I noticed how fantastic the colours were and felt the need to grab my camera. 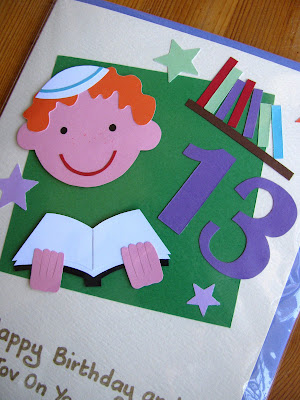 This week we were happy to join a good friend in celebrating the Barmitzvah of her son. The Barmitzvah boy is a gingie, or 'redhead' in Hebrew, and so, when his Mum asked me to make him a joint Barmitzvah and birthday card, this little image of him was easy to put together. Apparently he is a real bookworm and always has his nose in a book, so that was the theme that his Mum decided to go with. Mazal Tov. We really enjoyed being with you at the kibbutz for your Barmitzvah celebration. 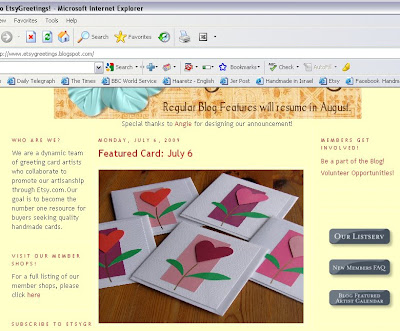 I am a proud member of the Etsy Greetings Team, a dynamic team of greeting card artists who collaborate to promote their work through Etsy.com. It was decided to take a temporary break from the team blog during July, and instead to feature one card from a different member of the group each day. On July 6th I was very happy to have my cards featured, and I am looking forward to seeing all the other 'July' cards throughout the month.
Posted by Handmade in Israel at 15:33 2 comments

School's Out For Summer

I may not be able to blog quite so regularly for the next few weeks. The kids have finished school for their two month summer break. Yikes! They were home for a couple of days last week, but have gone off today to their Kaytana, or summer camp, so I still have my mornings free for creating for at least the next three weeks. After that, we'll have to see... 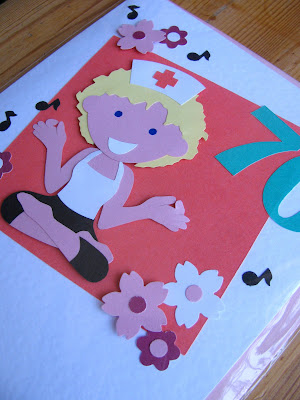 A few weeks ago a family friend from England was holidaying in Israel. She came to see us for the evening and proudly showed me photographs on her digital camera of some beautiful handmade cards that she had made. I was therefore flattered when she asked me to create a special birthday card for a good friend who was soon to celebrate her 70th birthday. They studied nursing together some years ago, so she asked me to illustrate her blue-eyed, blond-haired friend's nursing career, but also wanted me to include the fact that she practices yoga and enjoys music. It was a lot of fun to create this card, and I do hope that it made the birthday girl smile.
I recently started going to a local women's networking group which meets every two weeks. This morning it is my turn to talk for a short time about my business and the cards and pictures that I create. Public speaking is not exactly my favourite thing, but on the other hand it is rather nice to have the opportunity to show others what I make. Wish me luck. It will probably all be over by the time you have read this post.
Posted by Handmade in Israel at 09:29 6 comments