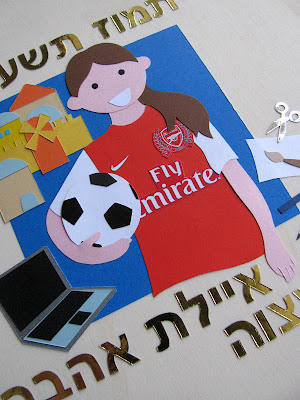 I don't know this young lady, apart from what her Mum told me about her, but I know for sure that she would get along great with my boys. Anyone who loves the English Premier League football club Arsenal would be made very welcome in our home, and we know just how much she loves Arsenal because her Mum asked me to show her wearing her favourite football team's shirt on the front cover of her Bat Mitzvah album. 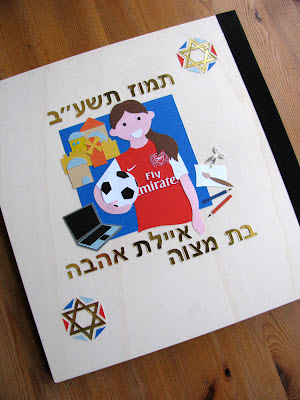 This Bat Mitzvah girl - or BATgirl, as her Mum calls her - also enjoys playing and studying on the computer, arts and crafts, and is passionate about our Holy City, Jerusalem. I have created a little representation of Jerusalem to the left of BATgirl, and included Montefiore's Windmill, a landmark windmill in Jerusalem, a few domed buildings, and the golden stone walls of Jerusalem's Old City. The Hebrew writing on the cover gives the date of BATgirl's Bat Mitzvah celebration, her name, and underneath that, the word Bat Mitzvah. 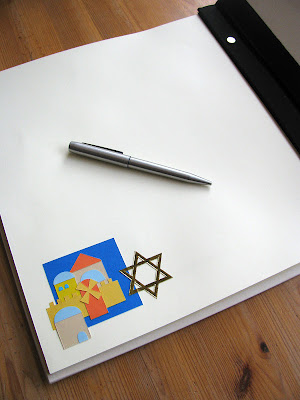 Inside the album I decorated a few pages along the same themes. Once again I recreated a little Jerusalem scene for the first page. Following that, one page shows her computer and some books - BATgirl's Mum told me that she is very curious and likes to learn new things - and another page displays the Arsenal logo and a football. I illustrated some pencils, scissors and a tube of paint to show her love for crafting and, finally, on one of the last pages of the album, made some little mock photographs of the various places BATgirl has visited with her family during her Bat Mitzvah year.
Each page was also decorated with a gold Magen David (Star of David) on a blue background, BATgirl's favourite colour and, finally, I sprayed the whole album with an acrylic sealer to protect it from sticky fingers at the Bat Mitzvah celebrations. 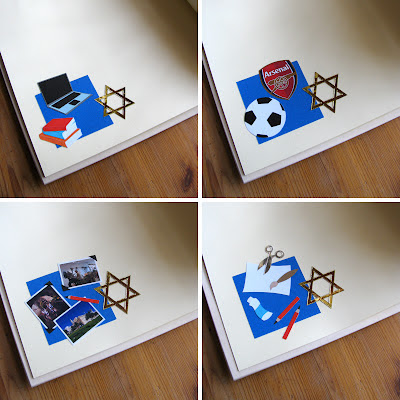 I am told that the album was very well received. BATgirl's Mum sent me a lovely message when it first arrived. "I just wanted to tell you that the book is even more beautiful than I imagined it would be! It is simply perfection, it is still a surprise, but I can't wait to see her face when the time comes!" and then, when the Bat Mitzvah girl did eventually see it, her Mum followed up with "You should have seen her face light up, she was so excited!"
There's nothing better than a happy customer!
If anyone is interested in ordering their very own guest book/album, there is a listing for one in my shop. 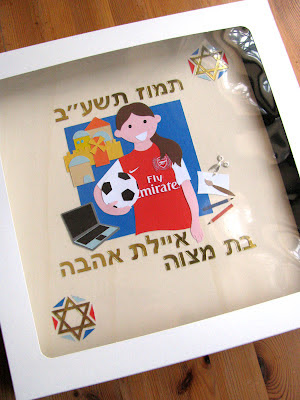 Posted by Handmade in Israel at 09:30

well done Lisa, you really seem to have found a special niche.

Lisa, thank you for making such a beautiful guestbook for our occasion. It really was the finishing touch that helped to make the occasion simply perfect!

You already know, Im a FAN of your work...

I have couple of questions:
-what is Bat Mitzvah?
-Do you draw each image and then cut it?
-what kinda paper is it?

In this peice, my fav is the LAPTOP and the pair of scissors...they look extremely real...

Amazing work as always! I love the details on each page. :)

Beautiful work as always. I love how you incorporate everything the personality of the person who receives one of your wonderful products.
Valerie
Everyday Inspired