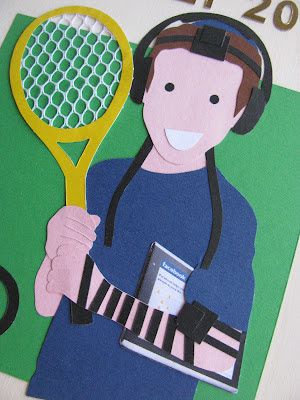 Okay, this is the last of the 'First of July' albums to show you. This one was made for a young man whom I have known since he was a baby and so it was fun to work on something for a kid I know for once.  His Mum told me that his main priorities in life at the moment are his Acer tablet and facebook, listening to music whilst wearing his big old-fashioned looking earphones, tennis, cycling and, finally, science subjects at school. She said that he doesn't really have a favourite colour but that blue and green were probably safe bets.
I pretty much managed to get all that onto the cover. My design shows him holding his tennis racket in one hand, with his Acer tablet (with facebook open on the screen) under his arm. He has tefillin on, as well as the big headphones and a kippa. His bike is in the background. 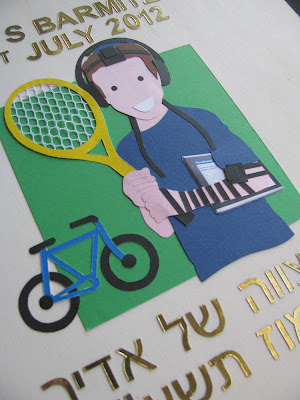 My figures almost always have my trademark round heads with sticky out ears. However, this young man is pretty slim so his Mum and I agreed that we should make his face more slender and stay away from the round look. It definitely worked best on this occasion and I really think that I captured some sort of likeness. 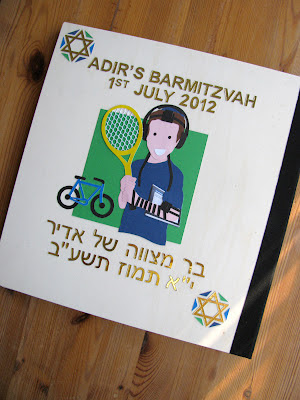 As I mentioned, this Bar Mitzvah boy is wearing tefillin on the cover. Tefillin (sometimes called phylacteries) are cubic black leather boxes with leather straps that Orthodox Jewish men wear on their head and their arm during weekday morning prayer. Jewish men start wearing tefillin just before their Bar Mitzvah and so it seemed suitable to show this young man, who is religious, wearing his newly acquired tefillin.
Tefillin have two leather boxes, one of which is worn on the arm and the other of which is worn on the head. If you are right-handed, which this young man is, you should wear tefillin on the bicep of your left arm. The tefillin box worn on the head should be centered just above the forehead with the two leather straps wrapped around the head, then hanging down over the shoulders.
Phew! I hope my illustration was accurate enough! 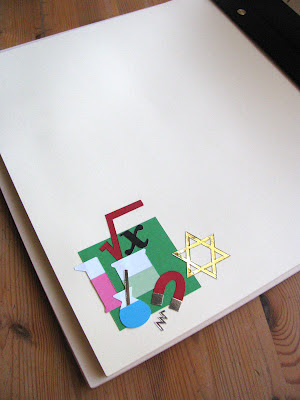 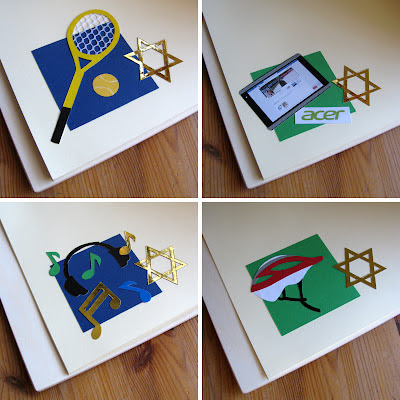 The Bar Mitzvah boy's interest in physics and all things science-related was included inside the album. The other pages display his love of tennis, his precious Acer tablet, open of course on the his facebook page, his grey, white and red striped bike helmet and, finally,  those big old-fashioned earphones, surrounded by a few music notes.
I either put a Magen David (Star of David) or a Tallit (prayer shawl) as a graphic element on the corner of my album covers and on each embellished page inside. This young man is now wearing a Tallit during prayers but his Mum preferred me to use a Magen David.
When you read a Hebrew book you open the rightmost page and flip pages until you get to the leftmost page (just the opposite of an English book) and this family chose to have their album open that way. The Hebrew writing on the cover repeats the name and date, also shown in English. 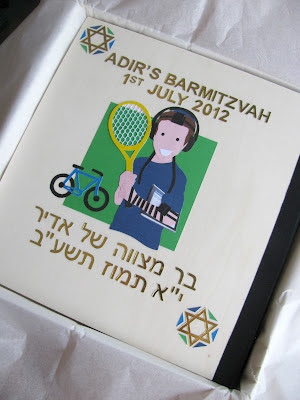 Posted by Handmade in Israel at 10:00

Such wonderful detailing as always! What a special keepsake for Adir.

What a fortunate young man. This is spectacular as always. I can't imagine the time it takes to work out all the details. Delish.

What an amazing album! The detail to add to your work is fantastic.
Valerie
Everyday Inspired

Great work as usual! I love the science motif. I am glad I am not Jewish since reading backwards would really confuse me! :)

Amazing Lisa! Love the detail you put in to it - what a lovely keepsake!!