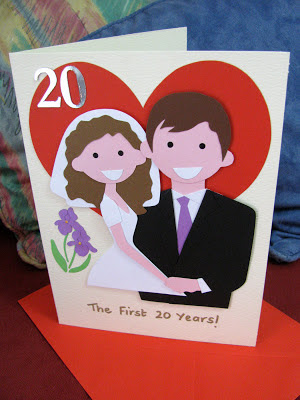 Remember the anniversary card from my last post? Well, what I didn't tell you - nor the couple at the time (though we laughed about it afterwards) - was that both the husband and the wife ordered cards from me! Fortunately they had quite different requests, so I was able to make the cards look very different with no overlap at all!
The husband's request came in first (good for him!). He asked whether I could design a card showing a bride and groom looking like the couple did 20 years ago.  Unfortunately he didn't send me a photo but I was able to take a reasonable guess - he had more hair and the bride wore white! He wasn't sure what the colour scheme had been at the wedding but did know that the flowers arrangements had included irises. He also wanted a 20 on the card and a heart. I came up with a sweet design which even included some teeny tiny irises, though I did learn afterwards that the scheme was gold. Oh well. 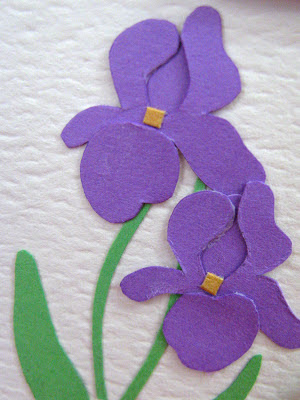 Whilst we're on the subject of wedding anniversaries, this card was created some time ago for a couple celebrating their Golden Wedding - 50 years of marriage! I went with a predominantly gold colour scheme and added a bouquet of flowers and balloons, along with a big 50 to mark the special anniversary. 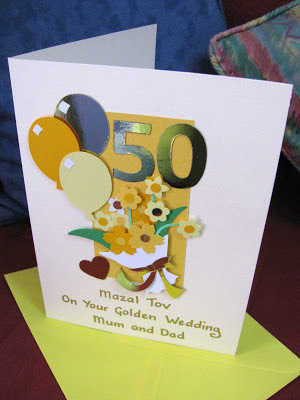 Finally, we recently celebrated Shavuot, the Jewish holiday which celebrates God's handing of the Ten Commandments to Moses at Mount Sinai. Shavuot, which literally means weeks in English, is the holiday when it is customary to eat dairy meals, with cheesecake being the most popular dessert on the menu.
According to Jewish tradition, the Ten Commandments handed to Moses included laws on how to prepare meat for eating. As all their utensils were no longer “kosher” according to these new laws, the Jews on Mount Sinai ate dairy products for the first time, which according to the Ten Commandments were now permitted (previously it had been forbidden to eat produce, including milk, from a live animal).
The holiday also marked the beginning of the new agricultural season in former times and was called Hag HaKatzir, which means “The Harvest Holiday.”
As I do every year, I made my favourite cheesecake, the recipe for which you can find here. It is rather time-consuming but always worth the effort. My cheesecake disappeared at a rapid rate and so I quickly took one last picture of it before this last slice went.
I must admit that I was the guilty party though. Yum! 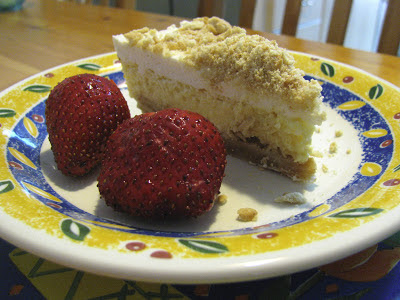 Posted by Handmade in Israel at 08:49 5 comments 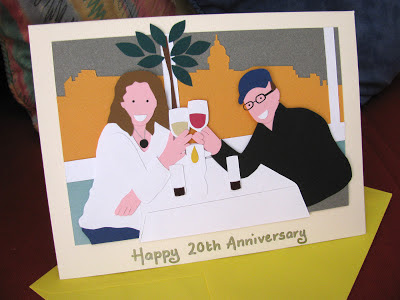 My friend called me up at rather very short notice. "If I send you a photo of J and I taken on our recent trip to Budapest" she said "could you copy it and make an anniversary card for me please?".
I checked my email. The photo was there. It was a lovely, happy picture of my friends but quite blurred and overall pretty poor quality.
Gulp. 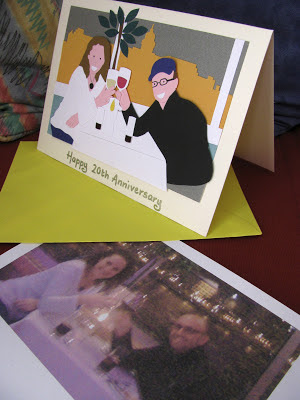 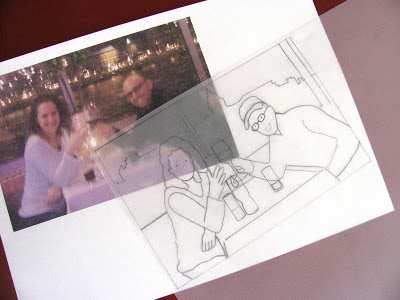 But of course I made her the card, though I'm not going to tell you how long it took me!
I traced the outline of the happy couple then made some adjustments to the layout to make it work. My friend was keen for me to show the skyline of Budapest, which they had viewed whilst travelling on a riverboat along the Danube. They can be seen sitting at their dining table, toasting their 20th wedding anniversary with a nice glass of wine. Truthfully I am not sure who had red and who had white - the photo was such poor quality - but we can see them making the toast on the card and that's what matters!
Happy anniversary M and J! Can you take a better camera with you next time you go away please? 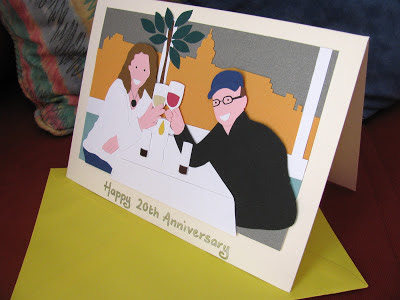 Posted by Handmade in Israel at 22:13 3 comments 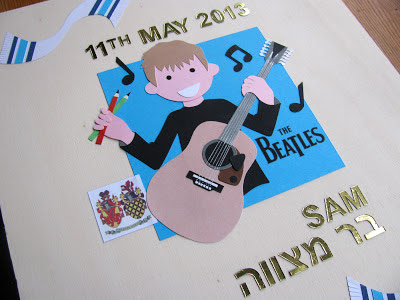 Sam recently celebrated his Bar Mitzvah and so I am now able to show you the customised album I created for him. Sam's Aunty ordered the album and told me that he has quite eccentric tastes. He likes The Beatles, plays the electric guitar and is in a band, though she couldn't tell me the band's name as apparently it keeps changing! He is a fan of Star Wars and of the music of Paul Simon and The Beach Boys, and is very good at art. She wanted me to include his school's badge too. 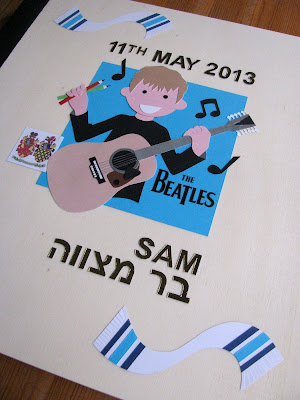 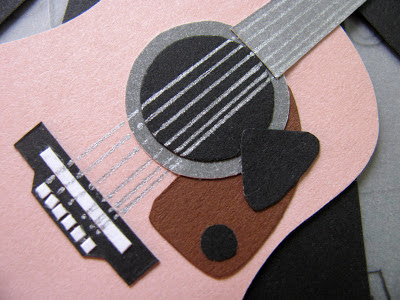 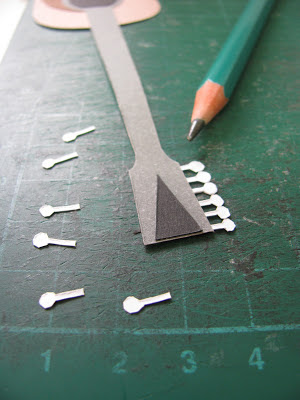 I have shown Sam with his guitar in one hand and a couple of pencils in the other. The guitar required quite a lot of attention to detail but I think I got it just about right! 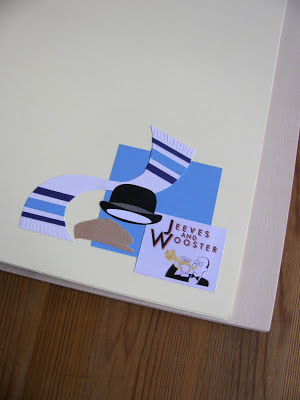 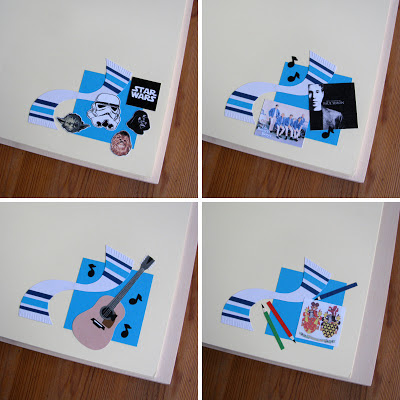 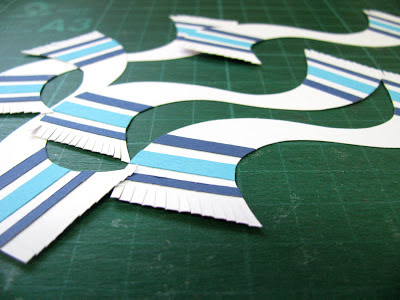 I embellished several pages inside the album. Each page, like the cover, has a blue striped tallit (Jewish prayer shawl) on it. Many boys begin to wear a tallit from the age of Bar Mitzvah, 13. The reason why the tallit is striped is simply because that was the fashion in Greece and Rome in Biblical times. However, the stripes remind us of the strand of techelet (blue) once worn as part of the tzitzit, the special knotted fringes attached to the tallit's four corners. The Torah (the first part of the Jewish bible and a central document of Judaism) commands that tzitzis contain a thread of tichales (blue), which in former times came from an animal called the chilazone, thought to have been either a squid or a type of snail. In memory of this dye it became customary to place a blue or black stripe on the tallit itself.
In addition to the tallit, each embellished page took on a theme. Sam likes the British comedy Jeeves and Wooster, above, so one page included the programme's title card and the iconic hats of the two main characters. There was also a page devoted to several of the Star Wars characters, Paul Simon and The Beach Boys, Sam's school and lastly, his guitar once again.
Sam's Aunty said she thought the album was "fantastic". I hope that Sam liked it too! 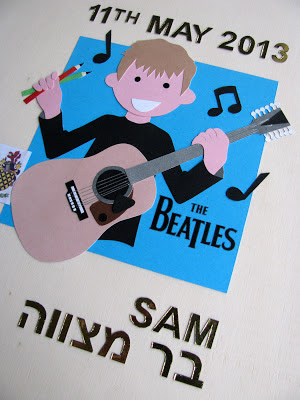 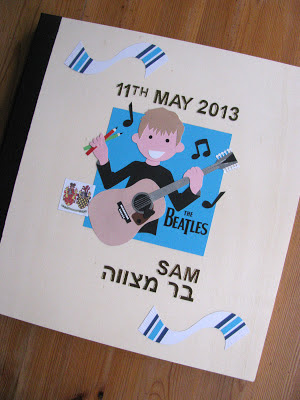 Posted by Handmade in Israel at 19:11 1 comments 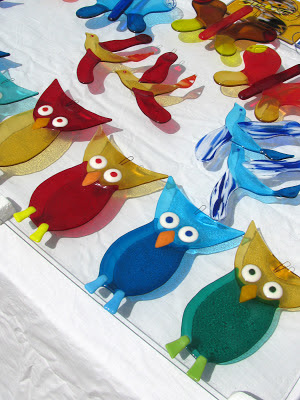 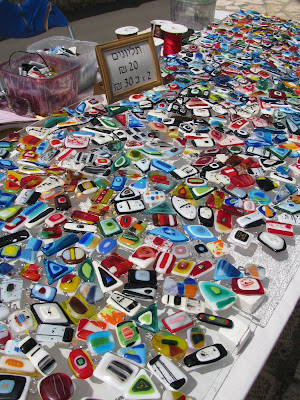 The artists' village of Ein Hod is situated on a hillside amongst olive groves and nestles at the foot of Mount Carmel, overlooking the Mediterranean Sea. It was established in 1953 when a group of artists, led by the renowned Dada artist Marcel Janco, moved into the abandoned Palestinian village of Ein Hawd. They believed that the village was a place where they could work, build studios and workshops, and form a creative environment for art and art education. After a period of time Ein Hod became the only artists' village in Israel, and one of the few in the world where artists live and create in every artistic media from the visual arts, to theatre, music and literature.
A few weeks ago we set out to explore it. 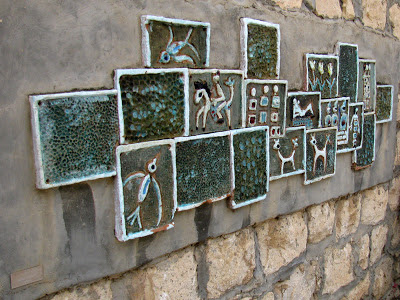 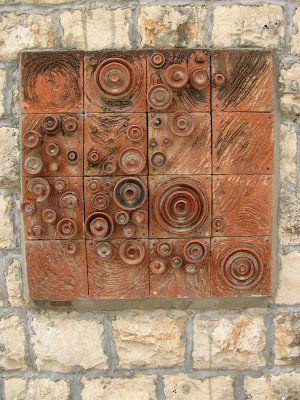 Many well-known Israeli painters, sculptors and musicians live in Ein Hod and their studios and galleries are open to the public. Their creations have been beautifying Israel's public places and homes for many years. Some of the old stone houses of earlier occupants - from the Christian Crusades to the Turkish Empire - have been preserved and the village mosque has been converted into a popular restaurant-bar. Art workshops for printing, ceramics, photography, silk screening and more are run, and during the summer performances take place in the outdoor amphitheatre and main square. Ein Hod simply bubbles with creativity. 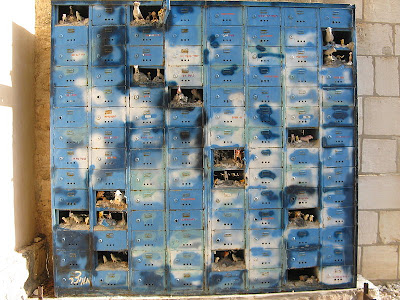 We strolled through the streets and explored the private galleries as well as the main Artists' Gallery, which exhibits the work of member artists living in the village who have been approved by the local jury. We stopped many times to discuss the sculptures dotted around the village streets and in the artists' gardens. We hiked the short distance up the hill to the Janco-Dada Museum, set up in 1983 by a group of friends of Marcel Janco. The museum contains several galleries dedicated to Janco's work and also the work of young artists, contemporary art and video art projections. 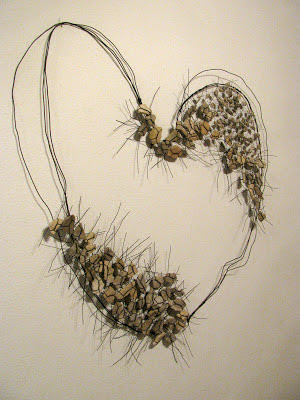 Ein Hod was evacuated and the village suffered considerable property damage during the 2010 Israel forest fire but it seems to have recovered nicely. For lovers of art, landscape and nature, the beautiful village is the perfect place to spend a few hours. It certainly made for a memorable day out for all of us. 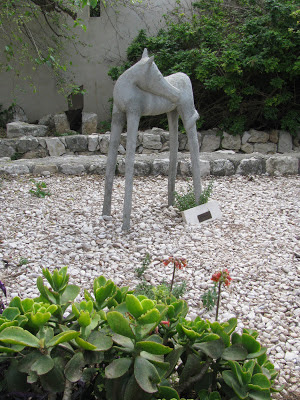 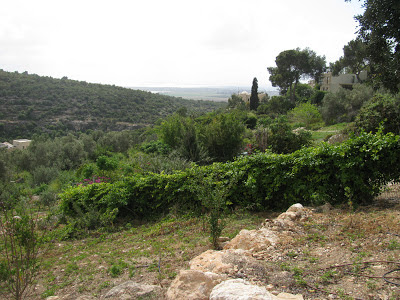 Posted by Handmade in Israel at 08:56 3 comments

Eating hamburgers and playing the violin

I've been a busy bee creating a number of Bar and Bat Mitzvah albums lately, though I can't show them here quite yet. In between the albums there are always card orders and here are a few which I know have already been well-received. 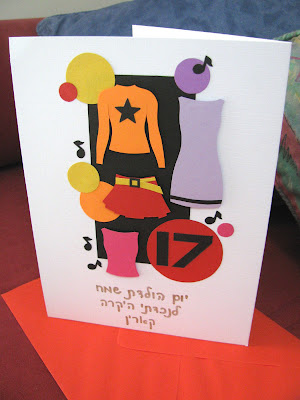 Karin was celebrating her 17th birthday. Her grandma told me that she is into clothes, clothes and more clothes! I kept the background of the card dark and added a bright and colourful wardrobe, along with a number 17 and a few music notes. I hope the birthday girl liked my choices. 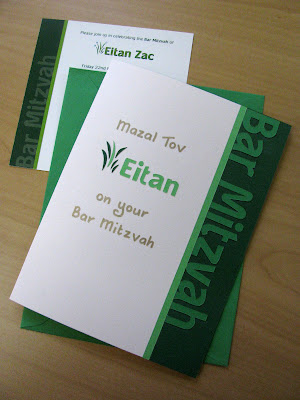 Eitan celebrated his Bar Mitzvah some weeks ago and we were happy to be able to celebrate his big day with him. His Mum asked me to create a special card based on the invitation we had received, so I set to work cutting out some teeny tiny letters, and some bigger ones too, to capture the look of the invitation. The card wasn't my usual style but it was an interesting one to create and Eitan's Mum was very pleased with it. 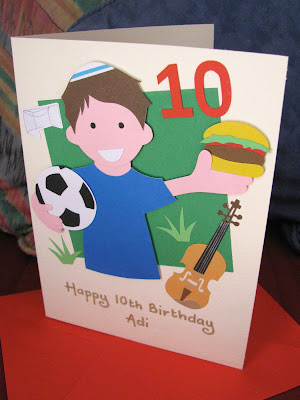 Lastly, Adi's Mum requested a card for her son who is football mad. He also loves eating hamburgers and playing the violin. It was a little difficult to imagine how all these hobbies would fit together, but I got everything in there!

Posted by Handmade in Israel at 22:23 2 comments