To Our Wonderful Daughter and Fab Son 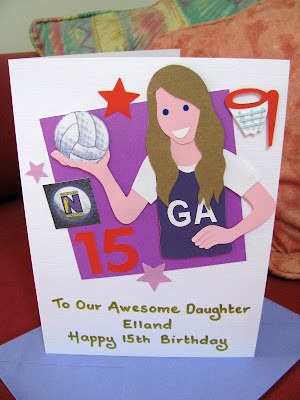 A new customer in the UK found one of my netball cards in Google Images and contacted me to see if she could order something like it for her daughter's birthday. She plays goal attack for a county team and lives and breathes netball, Mum told me. She also sent me the logo of her daughter's netball club which I added to the card. I included a netball post and a big red number 15 to mark her age as well. 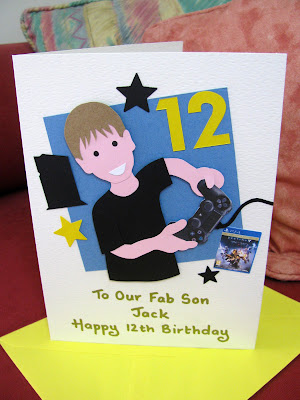 Mum also wanted a card for her son Jack, who was turning 12. He loves his PlayStation 4, his favourite game being Destiny: The Taken King. I suggested showing him with a PS4 controller in his hand. His favourite game is next to him and the console behind him.
I was a little nervous that the cards might not make it in time for their birthdays, but Mum told me that they got there quickly. "They really are fabulous. Thank you again, I shall be recommending you to all" she said.

Posted by Handmade in Israel at 09:37

They came out great Lisa! I love when customers let me know how they found me online. It is neat how our images can show up on places like Google.

Way to go - who knows how well known your cards become! So happy for you.
Just came back here to say many thanks for sharing your beautiful card with SEASONS!
May I give you a little hint, so more can see what you shared?
The EARLIER you put in the link, the MORE people will see it!
The photo link runs from Sunday 12 midnight to Wednesday, US Pacific time - each week. I would love for you to succeed!

Your cards are adorable. I too am a graphic designer and love creating. It was nice visiting here at your blog.

I have always admired your cards, I'm so glad that your talent is attracting customers from overseas. Your unique and personal cards are so much nicer than anything that is shop bought. Sarah x

Both cards are wonderful, Lisa. The mother must be so pleased.
Amalia
xo