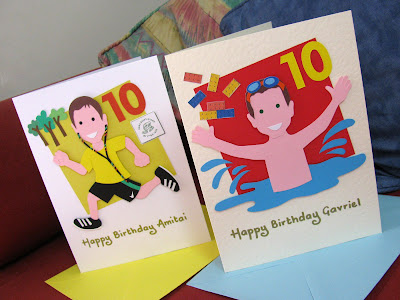 Twins Amitai and Gavriel are another couple of kids who receive customised cards for their birthdays every year. Last year they were into tennis and basketball, and prior to that they were both playing the cello and doing gymnastics. This year, when they turned 10, they (yes, they put in their own requests!) Mum had new ideas for their cards. 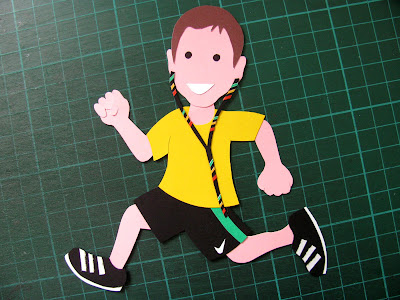 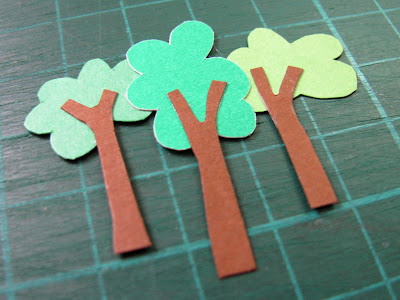 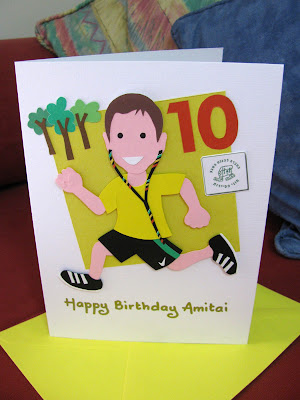 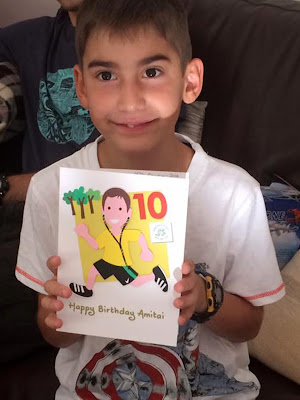 Amitai's favourite colour is yellow. He likes to go running and, while doing so, enjoys listening to music using his Marley in-ear headphones with their colourful braided cable. Mum was quite specific about the clothes he prefers to run in. I have shown Amitai wearing his black NIKE shorts and his striped adidas trainers. He also recently joined the Sayarut youth movement which is run by The Society for the Protection of Nature in Israel, so I added the logo of the youth movement and some trees to his card. 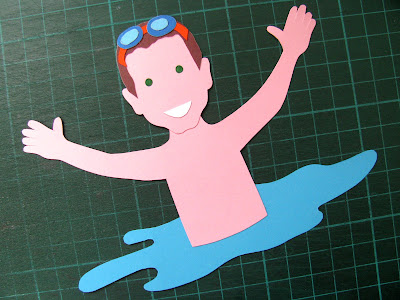 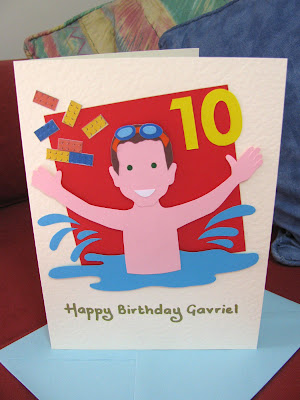 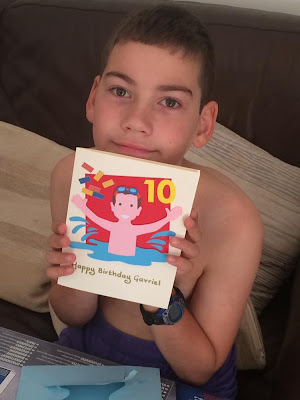 Gavriel favours the colour red. One of his favourite things is his swimming class and he also loves to play with Lego. I have shown him playing in the water, with a pair of orange and blue goggles on his head.
Both boys look pretty pleased with their cards, don't you think? 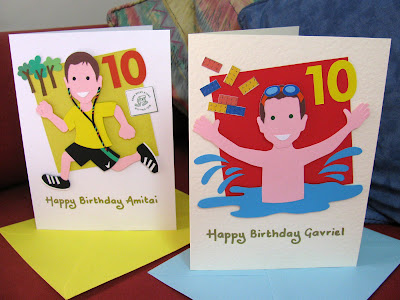 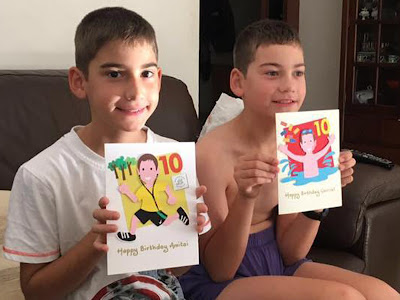 * This post has been shared on Friday Foto Friends, My Sunday Photo, Seasons, Pieced Pastimes, Sundays at Home and Creative Mondays.
Posted by Handmade in Israel at 08:06

I love how you capture the essence of the boys and the things that matter to them in your cards.

What beautiful creations for the birthdays! You are so talented and it's great to personalize them so precisely!

The cards are perfect! I hope they loved them! They really do look like the boys! Great job!

They are great. I love the customer photos. The boys are adorable!

That the twin put in their own request means they think you can do "anything":):) Great cards, Lisa! Also love the Paw patrol, with so many tiny details - your skill amazes me!Thank you much for sharing your work with ALL SEASONS.

Yes, the fires in Israel all all over Facebook (my adult kids pleaded with me to remain on there...) and am so happy other countries stepped up to help with planes to fight the fires. This is the first time I saw some worry on Netanyahu's face at the press conference.
Living in California I know a little what devastation fires can do, so keep safe, Lisa, as well as with your family. There are many across the pond praying for your country.

These are great cards, you did a great job with these, they are so Creative :) Thanks for sharing at Creative Mondays.