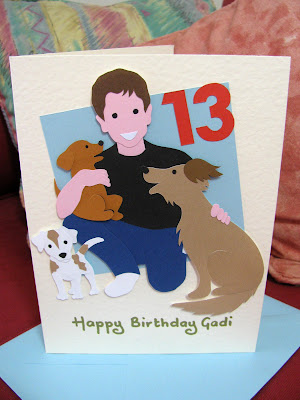 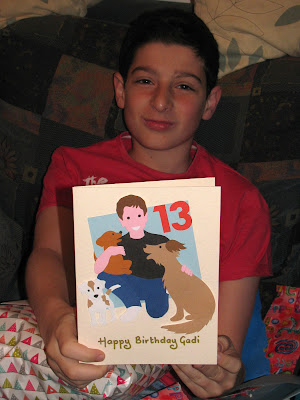 My youngest son just celebrated his 13th birthday. Many of you will realise that that means he will very soon be celebrating his Bar Mitzvah. There is very little talk of anything else in our house at the moment! I have lots to show you pertaining to his Bar Mitzvah, but this post is about his birthday. This years card, like last years, had to be about dogs.
Every day he reminds us all just how much he wants a dog. He shows us pictures of them on his phone and we watch clips together from The Daily Puppy. At meal times he shuffles in his chair, "I want a dog. Let's get a dog" he says.
I think he's serious. 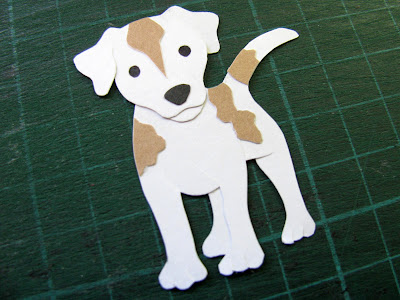 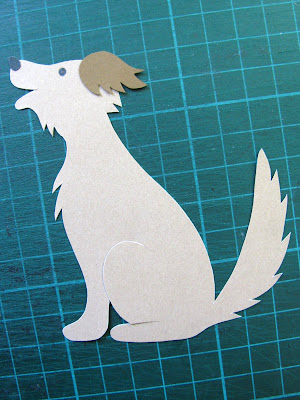 Gadi already has a dog walking job. He has also recently taken to visiting the local shelter weekly to take one or two dogs there out for a walk. He's too young to do it on his own though. Mister Handmade in Israel has to go with him. He doesn't seem to find it too much of a hardship. 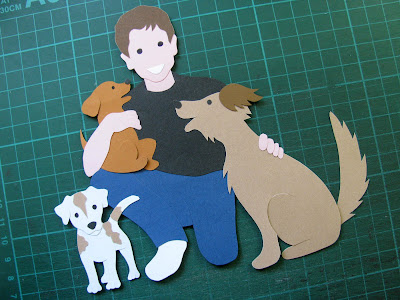 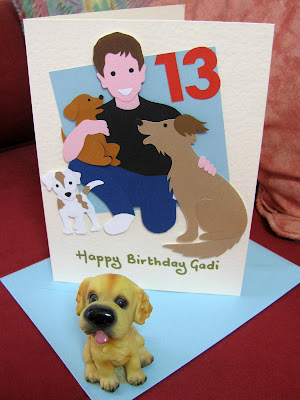 Gadi, you make me happy, proud and a little bit crazy, all at the same time! It's been a long year of preparations but the end is nigh! Happy Birthday to my smart, creative, book-loving, scooter-crazy, and dog-mad 13 year old. Keep calm, and keep learning. You've got 11 days to go!
Posted by Handmade in Israel at 09:46 5 comments 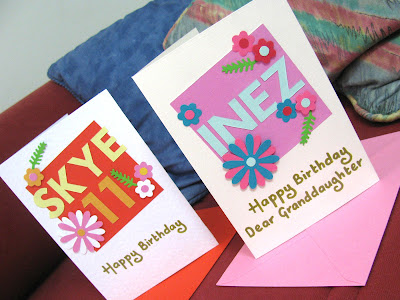 A customer wanted "something floral" for her granddaughters' birthday cards. Both girls have unusual and relatively short names, so I cut out the letters of their names and had a lot of fun playing with colour. 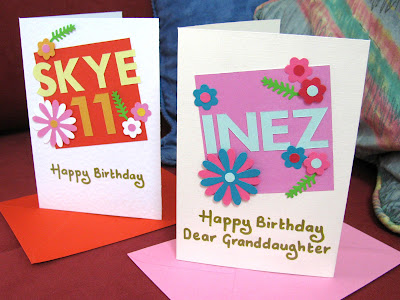 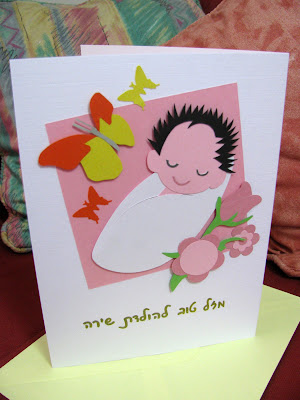 Another customer sent me the invitation she had received to a new baby's Simchat Bat, the Jewish naming ceremony for newborn girls.  I immediately noticed that the photograph on the invitation showed a baby with a mop of dark spiky hair, which I then had great fun recreating out of paper. I also added a few butterflies and flowers, similar to those on the invitation. The Hebrew greeting says "Congratulations on the birth of Shira." 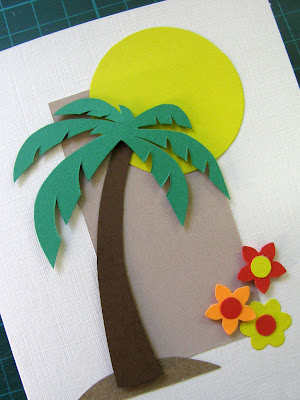 Yes, it is winter over here in Israel, though it has been quite a mild one so far, but a card with a palm tree on it was requested. I enjoyed making something a little unseasonal. It made me think warm!
Posted by Handmade in Israel at 17:17 3 comments 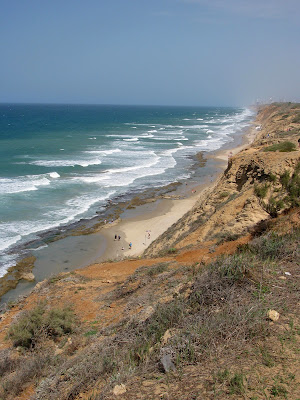 We visited the Sharon Coast National Park, also known as Hof HaSharon, at the end of October last year. October can be wintry here in Israel but it was a beautiful day and we were able to enjoy the well-marked, easy to hike trails before the rain came down in force the following day.
Situated near the coastal town of Herzliya, the park runs along the Mediterranean coastline, in an area where the sandstone cliffs rise 40 metres above the shoreline in places. When the sea is rough, the waves break against the steep cliffs and flood the entire strip of beach. Private lagoons and charming bays, created by the natural erosion of the sandstone cliffs, are also features of the area. The Israel Nature and Parks Authority have prepared the southern portion of the park for the public. The area is totally fenced in, and entrance is by foot only. 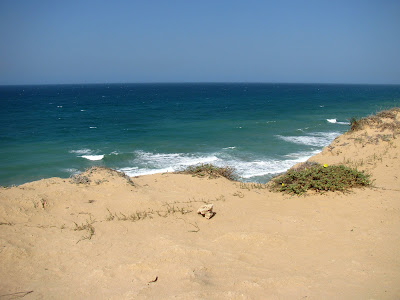 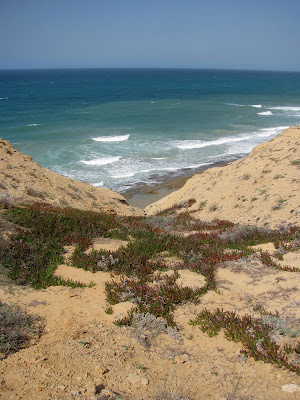 Arriving at the park, we decided to follow the Cliff trail which took us along the sand dunes and past some spectacular observations points. To the south we could see the smokestacks of the Ashdod power plant, and to the north the hotels in Netanya, and the smokestacks of the Hadera power plant. We passed a small channel going down to the shore, which my youngest son of course had to run down, then a second observation terrace with more wonderful views of the sandstone cliffs. From here the path branched out eastbound for those needing to shorten their hike and return to the beginning. We continued on towards the Iris trail, where species of the purple iris bloom in February. Eventually we had no choice but to return south on the Gazelle trail. On our way we passed an artificial irrigation pool, intended to quench the thirst of the herd of deer that live in the national park, but which also attracts other wildlife such as fox and a species of porcupine. The deer are notoriously shy and difficult to spot. 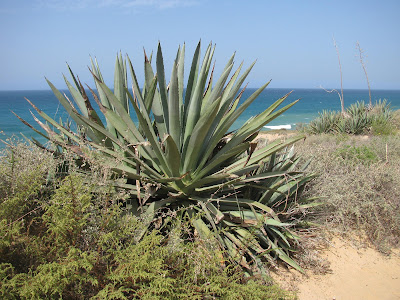 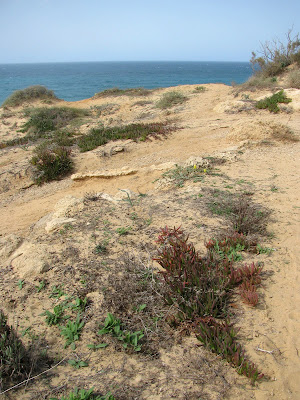 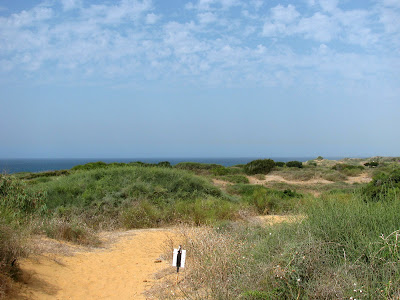 Another notable feature of the park are the winter pools, which some people call swamps. These swamps used to cover the entire area and made farming (and the threat of malaria) a nightmare for the earliest Jewish immigrants to pre-State Palestine. In the early 20th century, Eucalyptus trees were planted to dry out the swamps and make the land usable. All that remains of these swamps are within the park grounds. When they swell with the winter rains, the largest pool covers over fifty acres.
The Sharon National Park is not all that well known and so was not overrun with other visitors. We were able to enjoy the sand dunes and forests, all within the park grounds, in relative peace and quiet. It was a lovely place to visit. 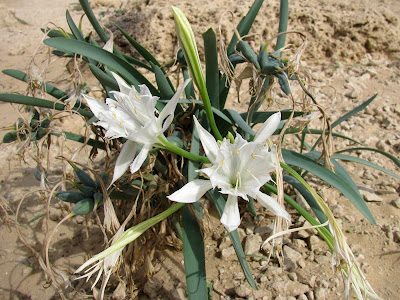 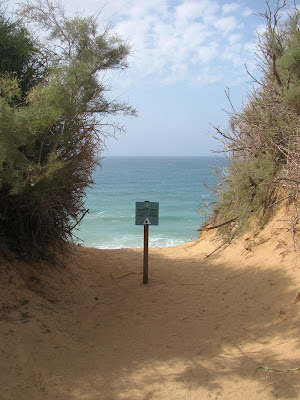 Posted by Handmade in Israel at 08:18 3 comments 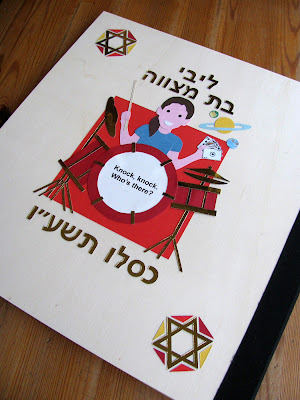 Libi's brother Ariel celebrated his Bar Mitzvah back in 2013 and I made him an album for his party. This time it was Libi's turn to celebrate her Bat Mitzvah and once again her parents asked me to make an album to mark the occasion.
Libi's Mum sent me a long list of her interests which included magic, jokes, science, astronomy, drums, the American reality competition series Cupcake Wars, and guinea pigs! After discussing with Mum which hobby should feature most predominantly, it was decided that I would show Libi playing the drums. I have shown her sitting at her red drum kit. In one hand she has a drum stick, but in the other a pack of cards, since she really likes doing card tricks as well. To her right are some planets, which illustrate her interest in astronomy, and on the front of the bass drum is the beginning of one of her favourite "Knock-knock" jokes.
Since Libi likes red and gold, I made the background box red and the lettering gold. The album opens the Hebrew way, from right to left, and Libi's name is in Hebrew, with the words Bat Mitzvah and the Hebrew date of her Bat Mitzvah celebration underneath. 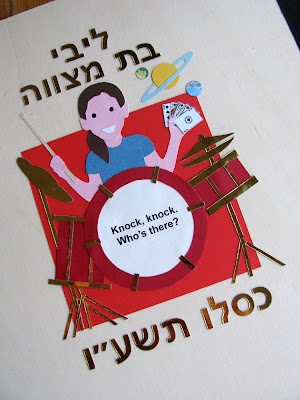 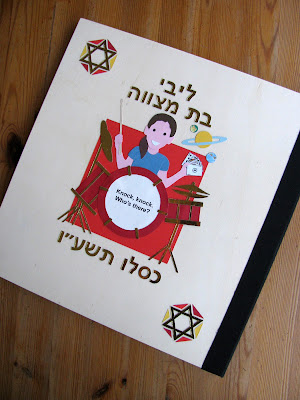 I decorated several of the pages inside the album too. I opened with a page featuring a cute little guinea pig, then added some more playing cards on the next embellished page. Some test tubes full of some interesting coloured potions, depict Libi's favourite subject, science. The next page featured the logo of the Cupcake Wars competition, along with some yummy-looking iced cupcakes, and lastly, another page was filled with planets and a telescope, since Libi is keen on astronomy. 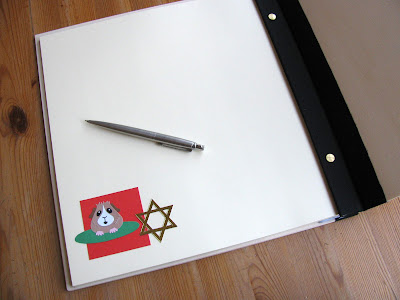 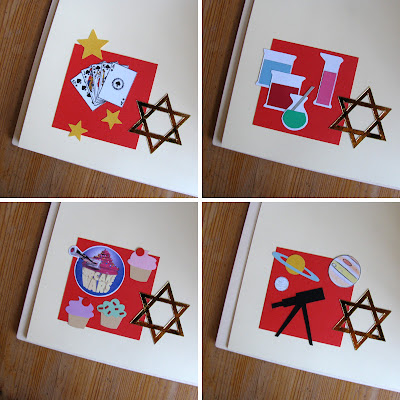 Mum was thrilled when she saw the album. "Incredible book! Thanks so much!" she wrote.
Always nice to have a happy customer! 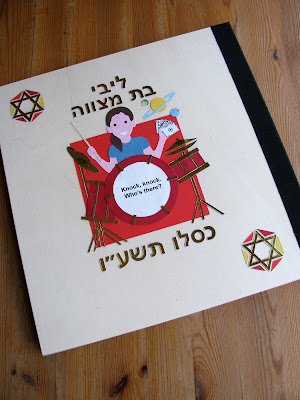 Posted by Handmade in Israel at 08:11 3 comments

You say Binyamin, I say Benjamin

Happy 2016! I hope you all had a fun time. New Year's Eve is not a big holiday here in Israel, specifically because the Jewish New Year, Rosh Hashanah, actually falls in autumn, a few months previously. However, as a family we didn't let it go unnoticed. Mister Handmade in Israel and I spent the evening with friends, and my boys, well they each had their own plans.
What have I got to show you for my first post of 2016? Well, I couldn't resist showing you these two cards together. Even though they are clearly made for two "guys" of very different ages, they share the same name, albeit using it in two different forms. By chance, I gave them the same coloured shirt as well! 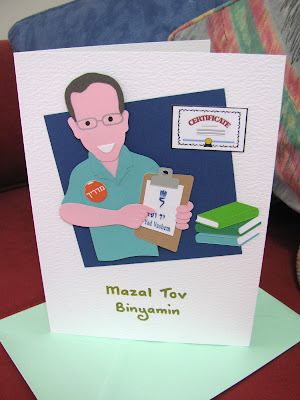 The first card, for Binyamin, was given to him when he recently passed the educational guide's course at Yad Vashem, Israel's official memorial to the victims of the Holocaust. Wanting to keep the card light-hearted, I showed Binyamin holding a clipboard with the logo of Yad Vashem on it. There is a certificate to mark his achievement and a small pile of books next to him. He has a badge pinned to his shirt with the Hebrew word מדריך on it, which means "guide".
As an aside, the name "Yad Vashem" is taken from a verse in the Book of Isaiah: "Even unto them will I give in my house and within my walls a place and a name better than of sons and of daughters: I will give them an everlasting name, that shall not be cut off". Naming the Holocaust memorial "Yad Vashem" conveys the idea of establishing a national depository for the names of Jewish victims who have no one to carry their name after death.
The Hebrew name Binyamin means "son of the south" or "son of the right hand". Benjamin in the Old Testament is the twelfth and youngest son of Jacob and a patriarch of one of the Twelve Tribes of Israel. He was originally named "Ben-oni" meaning "son of my sorrow" by his mother Rachel, who died shortly after childbirth, but it was later changed by his father. 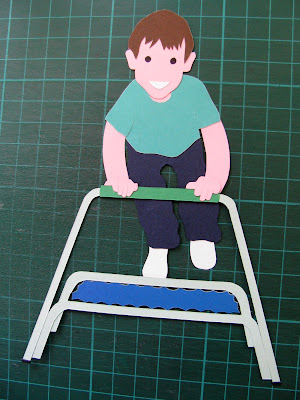 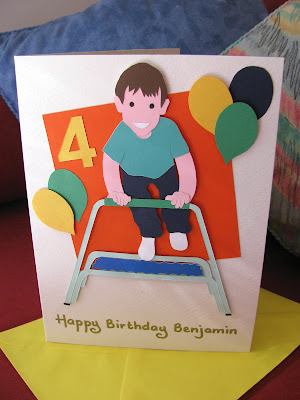 This little guy uses the English form of the name, Benjamin. Last year Benjamin was into puzzles. This year it seems that things have livened up in his house! He loves jumping and really wanted a trampoline for his fourth birthday. I modelled the trampoline on one that my own kids had when they were little. It was great! They're just a bit too big to use it now...
Benjamin looks very happy with his birthday card. 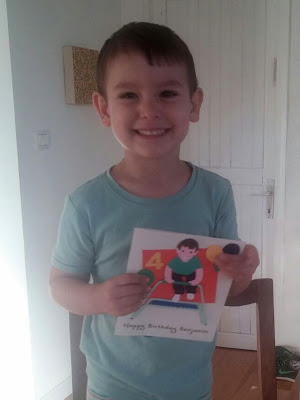 Posted by Handmade in Israel at 07:49 2 comments