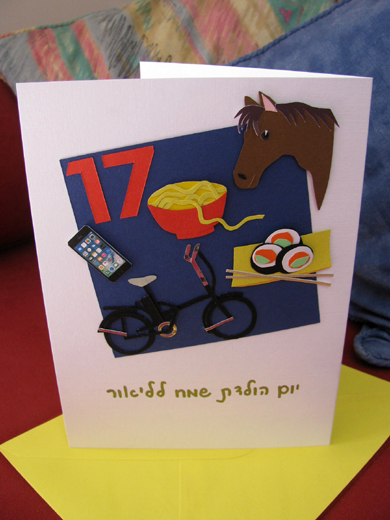 Lior was turning 17. His Dad told me that he loves his electric bike and horses, and asked me to include his iPhone, a bowl of noodles and some sushi on his birthday card as well. I modelled the horse on this one, a longtime favourite project of mine. The Hebrew greeting on the card says "Happy Birthday Lior" and it opens in the Hebrew direction, from the right, because the Hebrew language is read from right to left instead of left to right like English. 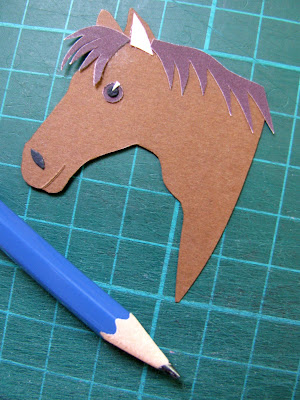 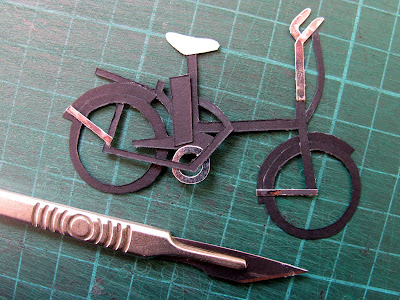 20-year-old Ori, below, is into the CrossFit fitness programme, so Mum asked me to show him lifting weights on his birthday card. He has also just got a new military rank in the Israel Defence Forces (IDF) so, despite the fact that I have shown him in black sportswear and not in his olive green army uniform, I made sure to add those special stripes in the background. Mum was also keen for me to include Ori's army symbol on the card. It is similar to the Eye of Horus, an ancient Egyptian symbol of protection, royal power and good health, though I have absolutely no idea what it has to do with Ori or the Israel Defence Forces! 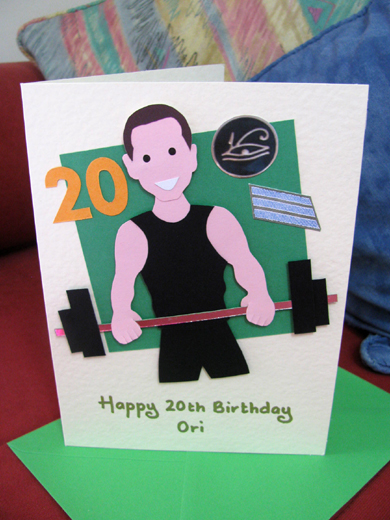 * This post has been shared on Happiness is Homemade, Seasons, Make it Pretty Monday, Wordless Wednesday (on Tuesday), Our World Tuesday, Inspire Me Tuesday, The Happy Now, {too} cute tuesday and Project Inspire{d}.
Posted by Handmade in Israel at 08:36

Love the sushi! So fun!

Great details! How interesting that a symbol like the Eye of Horus is used for that army. It is a cool, meaningful symbol.

Wonderful creation ~ so creative and bet Dad was happy ~ ^_^

A Shutter Bug Explores ~ aka ~ (A Creative Harbor)

OH,that bike must have been tricky - small and round wheels -great job, Lisa. Never thought about it that the way the language reads also would effect how one opens up the card! It would be also perfect for left-handers like I:) A curious question, but only answer if it does not effect safety - what rank are the three stripes? Many thanks for coming to All Seasons - have a great week!

Thanks for sharing at https://image-in-ing.blogspot.com/2017/10/wind-and-water-water-and-wind.html, and thanks especially for sharing your beautiful country with me a year ago. I'd love to be able to come once again.