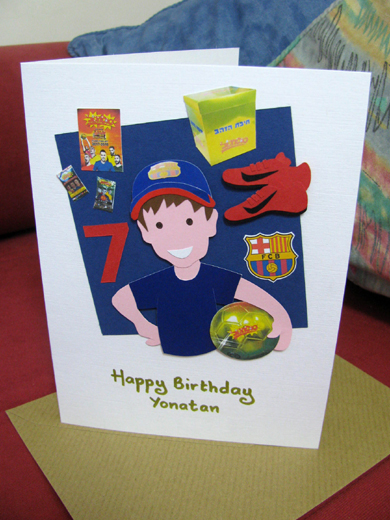 "Yonatan has been begging for his own card, especially since his brothers and all our family have got one over the years" his Mum wrote to me. So I made him a card for his 7th birthday. "He is absolutely soccer crazy!" she said. "He supports Barcelona football team. At the moment he is obsessed with the "Supergol" football cards and album [a sticker album of Israel's football league which is published every year], and loves his golden ball and golden box. Of course his red football boots are crucial too!" "I hope you can depict some of this in the card!" Mum wrote. Of course I could!

I showed Yonatan wearing his beloved team's cap. He has his golden ball in one hand. Behind him is the Supergol album and some stickers, his golden box and his much-loved red football boots. The
Barça crest, which shows the St George Cross and the red and yellow bars of the flag of Barcelona, the club initials FCB on a strip across the centre, and below, the Barça colours and a ball, is next to him. A big red number 7 marks his age. 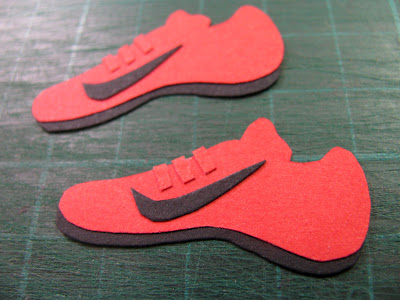 Mum was kind enough to message me to tell me that the card had arrived. "I love it! I'm sure he [Yonatan] will too!" she wrote. Then the next day she followed up to say that "Yonatan, and all his friends, loved the card, especially seeing HIS shoes!"
Never underestimate the importance of a special birthday card. 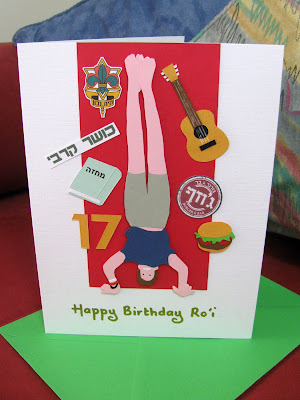 Roi's mum also wanted a special card for her son's birthday. Last year the theme of his card was climbing, but this year mum had a long list of things she wanted me to include. She specifically asked me to show her son standing on his head! His various interests (apart from standing on his head) include playing the guitar, Kosher Kravi (combat fitness) and drama. He is a madrich (youth counsellor) with the Hebrew Scout Movement in Israel and he likes to eat hamburgers from a favourite restaurant.
I showed Ro'i standing on his head and added the Scouts badge, the Hebrew words for combat fitness and a little book that says מחזה (play) on it, to his left. To his right is a guitar, and a hamburger, along with the logo of Ro'i's favourite restaurant. Finally, the number 17 marks his age.
It seems that my card made Ro'i's brothers laugh (and I know why - he did look a little strange when turned the right way up!):
"Lisa, it's the coolest card ever! We all had such a laugh looking at it... the boys kept turning it over and laughing. I hope you had fun making it because we love it!"
Well, it's good to have a giggle! 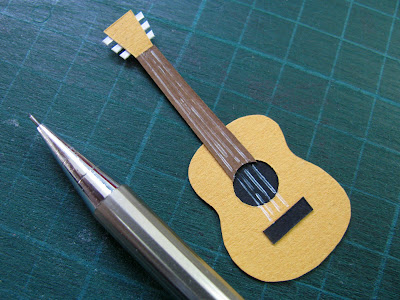 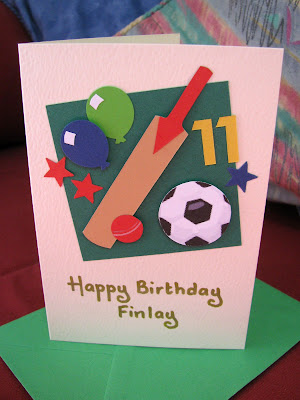 Lastly, this small card was a request for a young man who likes cricket and football. I remember creating a card for him with a cute green monster on it, back in 2014. It seems that he has moved on to sportier things since then.

Oh my 3 fun cards today. My fav is the young man standing on his head. It really made me smile.

Yonatan is my son's second name, because we loved the meaning of that name. Am laughing about Roi's card, because you struck the right cord, for Roi and his friends - a feather in your cap:):)
Thank you Lisa for sharing it with All Seasons and that you may make more cards giving you reactions like that one of Roi's:)

What wonderful cards. Having them made is so special. #MMBC

Your cards are so beautiful and I can see why the personal touches are appreciated so much. You bring so much happiness with your crafts.
#mmbc

Love the Barcelona card!! How great to have your cards requested!

I'd love to see how you make these, Lisa. It looks like it could be fun and possibly quite relaxing.
Thanks for linking up at https://image-in-ing.blogspot.com/2018/01/a-few-feathery-visitors.html

Thanks so much for sharing with #MMBC. Have a great week :)

These came out great! I am sure the boys loved them. How fun to be able to make a person standing upside down. :)

Your creativity is limitless ....

What a sporty selection this week. I love the red football boots.

Your cards are so unique and beautiful! I can see why people love them :)