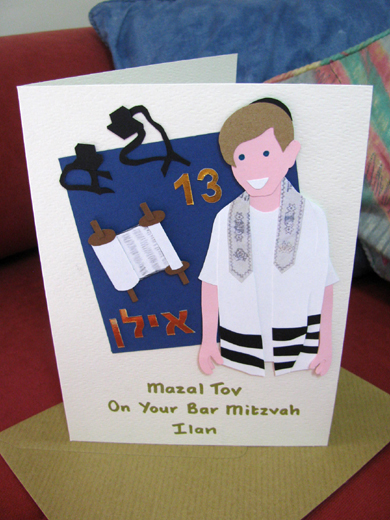 Ilan celebrated his Bar Mitzvah back in February. His auntie ordered a card for the Bar Mitzvah boy. She sent me some pictures from his pre-Bar Mitzvah photo shoot and I carefully matched his hairstyle to create a paper portrait of the young man wearing his new tallit (a Jewish boy who has reached the age of 13 wears a tallit for morning prayer, during the week, as well as on Shabbat and other holy days) and his kippa. I added a Sefer Torah and some tefillin as well.
The Sefer Torah, or Torah Scroll, contains The Five Books of Moses that were given by G-d to Moses on Mount Sinai, and include within them all of the biblical laws of Judaism. It is meticulously written by an expert scribe on parchment (animal skin) and is kept in the ark of the synagogue and taken out to be read during services. A boy is called up to read from the Sefer Torah on the first occasion that the Torah is read following his 13th birthday. Tefillin are cubic black leather boxes with leather straps containing four hand-written texts from the Bible, which Orthodox Jewish men wear on their head and their arm during weekday morning prayer. Jewish boys start wearing tefillin just before their Bar Mitzvah.
Finally, I added Ilan's name in Hebrew letters and the number 13 to mark his age. 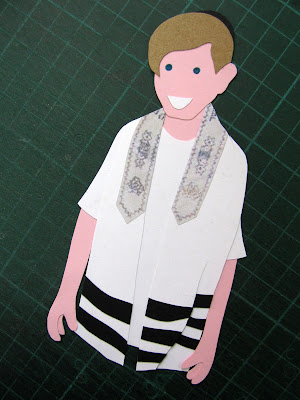 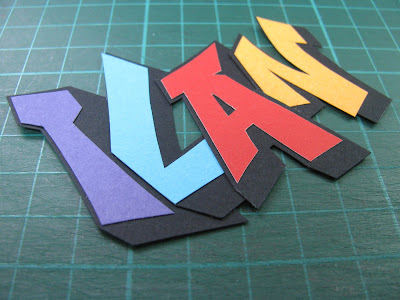 Ilan's auntie also requested a card for the parents of the Bar Mitzvah boy. I recreated the street-art style logo from his Bar Mitzvah invitation and once again added some Jewish symbols and religious objects: a Torah scroll, a Star of David or Magen David, a blue and white striped tallit and some tefillin.
My customer told me that both cards were very well received. She was kind enough to leave the following review on my Facebook business page:
"I just ordered two more cards for my nephew on his Bar Mitzvah and for my brother... [It] was truly amazing how Lisa took photos, both with my husband previously and my nephew now, and made such great copies." 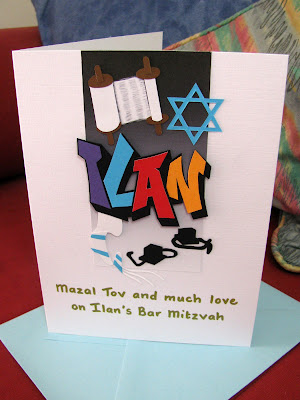 * This post has been shared on The Creative Circle, Anything Blue Friday, Seasons, Sunday Features, Happiness is Homemade, {nifty thrifty sunday}, No Rules Weekend Blog Party, Sunday Snap, Welcome To The Weekend, Amaze Me Monday, The Good. The Random. The Fun., Wordless Wednesday (on Tuesday) and Make It Pretty Monday.

Posted by Handmade in Israel at 07:55

You are a remakably talented lady! I always love dropping by to see your art.

I love the street art style for his name. Very fun!

I like the fact that his parents got a card too. Both are wonderful. xx

That was a great compliment you received from the aunt on FB:) Wow, I didn't know that a boy would be called up to read the Thorah after the Bar Mitsvah - what an honor! Interesting post as always, Lisa:) Many thanks for sharing this Bar Mitsvah for All Seasons! Enjoy your week:)

The name came out so great!

This is great. You are very creative Lisa :) #MMBC

You do such beautiful work!
Thanks for linking up at https://image-in-ing.blogspot.com/2018/03/the-beautiful-biltmore-estate.html

Beautiful individualized cards as always -- it is a very nice idea to give the parents a card -- while credit goes to the young man for his achievement, I'm sure the parents had a great deal to do with his getting there (and it is quite a milestone to have a son who is so grown-up I am sure!)

You have such a talent for customizing these cards, and yet they are so professional. Anyone would be delighted to receive such a special card!

It’s great that you celebrate these ancient traditions in a personal way.

I love the attention you put into every detail, Lisa. Beautiful work.
Amalia
xo

I love learning more about Jewish customs and traditions from your posts. The mixing of the street art with the traditional symbols is so clever.

Love your post with so much historical information. Your cards are awesome, as always.