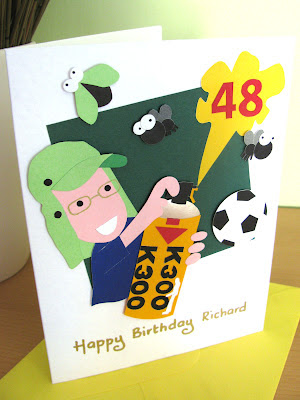 By far the favourite card I have made for a member of my own family was the one I made for the hubby's birthday last year. The kids still talk about it. Therefore I knew I had to come up with something good this year. Something that was going to make them all laugh that little bit harder. Well, it was Mister Handmade in Israel's birthday yesterday and I'm pleased to say that both the hubby and the boys roared when he opened this year's envelope. 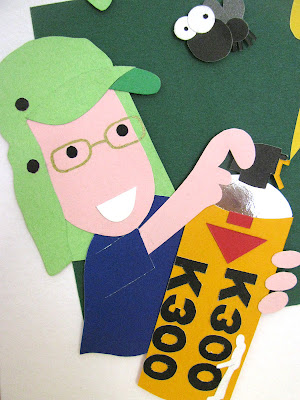 The hubby is very pale skinned. A real Englishman in New York, erm, the Middle East. He's quite rightly careful about the sun and insists on wearing a truly dreadful green hat with a flap to cover his ears and neck. I couldn't resist showing him wearing the above-mentioned hat on his birthday card! 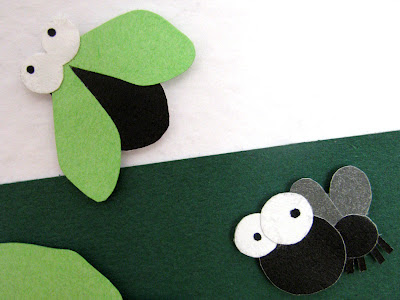 Not only is he careful about the sun, but he's also obsessed careful about flies and other creepy crawlies getting in to our back garden and home. Now, I'm not saying that I love them, but Mister Handmade in Israel, well, he blasts them with plenty of strong smelling repellent whenever he gets the opportunity. The Sano K-300 that he uses is powerful stuff. There isn't a crawling insect or cockroach that can survive it but I often wonder if we can survive it too! Boy does it smell.
I have shown the hubby with a can of Sano in his hands. Those little flies look pretty scared don't they? The big cloud of repellent clearly shows the hubby's age on it, and I popped a football onto the card too. I simply can't make a card for many of the boys in my family without a football on it. I was tempted to make it England-related given that, up until the night before the hubby's birthday, England were doing pretty well in the European Football Championship. Good job I didn't do it. 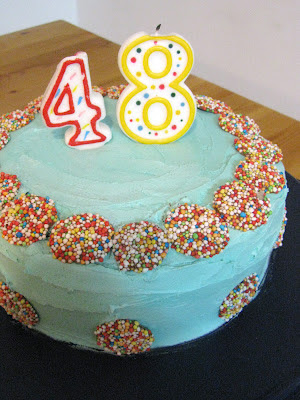 Happy Birthday Mister Handmade in Israel. Thank you for laughing at the card and allowing us all a little giggle. I hope you had a great birthday and that you liked your cake too. If you don't come home from work soon there won't be any left for you. The eldest son is rather partial to it...
Posted by Handmade in Israel at 18:36

What a lovely card! You are so clever in your ability to represent people's lives. How can you possibly top this next year? I loved the sleeping on the couch one from last year. I am a great fan of power-napping, so can identify with your hubby!
I noticed your lovely wild animal card you sent to someone in South Africa a while ago. Well done!

I love the way you personalize your cards and it's always fun to read about all the thought that went into making them.

LOL!! This is another fabulous creation! I hope is day was fabulous and I'm sorry about England.

its an adorable card..love the attention to detail...

What a fun card! I love the way you incorporate the persons personality into your cards. Fun cake too! I hope your husband had a happy birthday!
Valerie
Everyday Inspired

Hi hi, love the idea of this card! Looks like spraying away the age as well, ha ha! Did it work? :-D
Fun card!
Hugs, Wendy