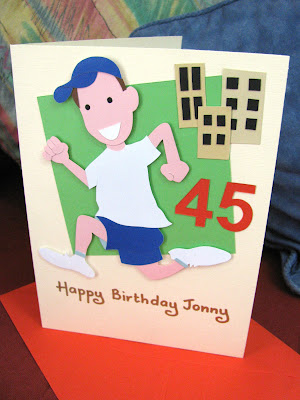 Jonny has recent taken up running and so his wife thought it would be fun to show him doing just that on his birthday card. She told me that he always wears a blue cap and blue shorts. The rest of the outfit I took a guess at! Jonny runs around his local neighbourhood so I added a couple of buildings in the style of the city we live in. I think I did it a disservice. 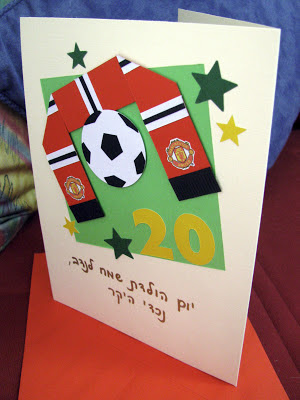 A regular customer asked me to make a large birthday card for her grandson. He is currently serving in the Israeli military and you may remember the card I made for him last year. This year we concentrated on his love of football, and in particular Manchester United! I crafted a red and black striped scarf with the team crest and added a football too. The Hebrew greeting on the card says "Happy Birthday to my dear grandson Nadav".
My customer also asked me to make a card for the same young man, this time from his parents. For this card she suggested I add his other sporting passions, which include tennis and swimming. I added a football in again for good measure.
Grandma told me that he loved the cards. 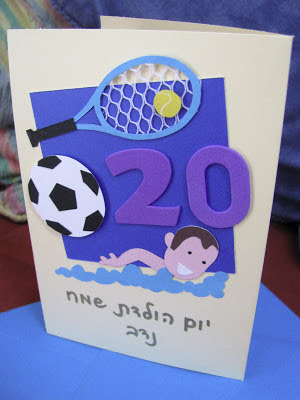 Finally, this blue and white shirt was going on a card for a Leeds United supporter. Given that Leeds scored the goal which helped my family's favourite team, Hull City, regain entry into the Premier League at the end of this year's football season, I was happy to make the card and crafted it with great care! 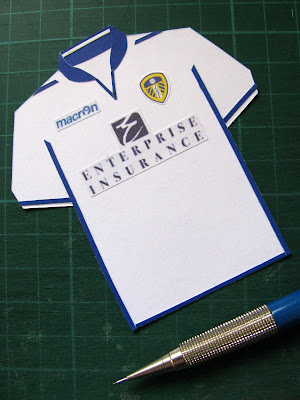 Posted by Handmade in Israel at 23:04

amazing set of cards. More works of art than commercial pieces, in my view.
Richard