Once there was a Doctor, a Cabbie and a Lawyer... 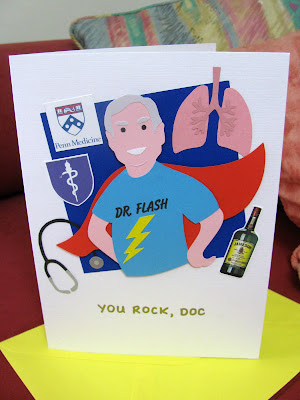 A customer of mine asked me to create a special card for her doctor who, she told me, is amazing in every way. He talks, he listens, he never rushes. No other doc comes close, she said. So she wanted a special card to thank him.
She sent me some photos of him but already had the idea in her head that her doctor should be in the centre of the card wearing a red cape. On his shirt it had to say Dr. Flash with a lightning bolt. Around this I was asked to include a pair of lungs (definitely a first for me!), a stethoscope, and the logos for Penn Medicine and NYU School of Medicine. She also found out that her doctor loves Jameson Irish Whiskey and thought it would be fun to include that too.
"Dr. Flash" loved the card. "Thanks so much for your card. It is absolutely wonderful - best ever" he told her. 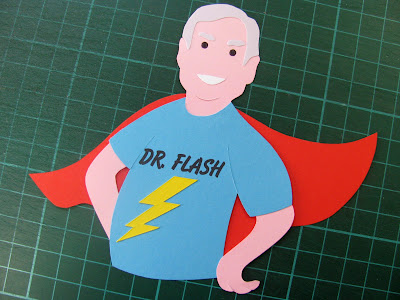 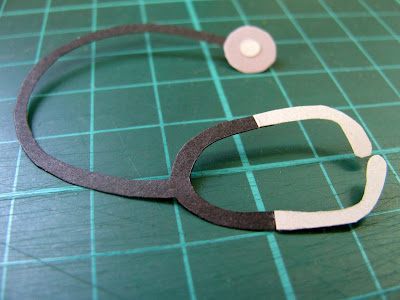 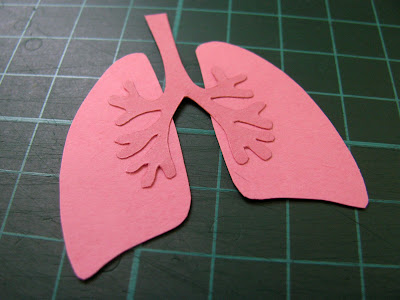 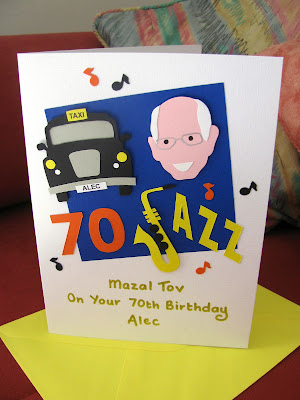 Another customer asked me to create a card for her cousin who was turning 70. He's a black cab driver in London and likes music, especially jazz. Once again I was sent a photo of the gentleman concerned so was able to create a paper portrait of him next to his cab, which has his name on the registration plate. A golden saxophone formed the letter 'J' of the word jazz and I added a few music notes too. 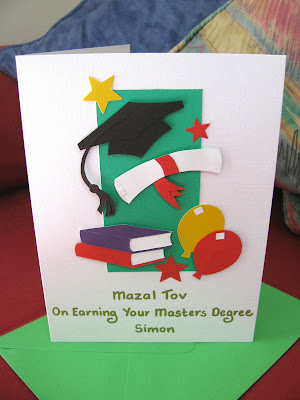 Finally, a regular customer received some fabulous news that her grandson had earned his Masters of Law with Distinction. She asked me to create a special card to congratulate him on his wonderful achievement. A mortar board and scroll, along with a small pile of books, clearly fitted the bill.

* This post has been shared on Blue Monday, Seasons and the Good.Random.Fun.

Posted by Handmade in Israel at 08:26

Paper lungs - I love them! Dr. Flash sounds wonderful - I wish my GP was always so accommodating. xx

The Dr Flash is so nice! I can imagine the surprise when someone sees this card for the first time! And I love your words Mazal Tov on the other card. In Dutch it is Mazzel Tof :-) And teenagers are saying: De Mazzel. There are so many Jiddisch words all over the world.

Do you use scissors or a knife for your creations?

Nice work Lisa! I love the playful use of the "J" in jazz. How wonderful your customer is giving a card to her doctor. Good doctors are hard to find these days.

such great details, again. love the 'you rock, doc.'

Such fun cards to do - well if these are your first lungs, I wouldn't worry - perfect! Yeah, the whiskey bottle was the first that caught my eye:)Had to laugh about the superman cape:) Have to say that enhances the card a great deal if you have a photo of the recipient.

Thank you so much for sharing your work with SEASONS and have a fabulous week!
PS Also thanks for your email about the tallit:)

To get back to you about your question, yes, the sea lions are there on that rock most of the time - the weather here in CA is much like the Mediterranean, rarely below zero. Now we moved to a higher altitude (3000 feet), seven hours more North, it does get colder here, and snow in winter.

What a labor of love!
http://travelingbugwiththreeboys-kelleyn.blogspot.com/2016/09/on-your-mark-get-set-go.html

Love your original, cards so much. You could start a business. Beautiful, colorful and meaningful.

Congrats and sending you wishes for a happy week.
Blue Monday.
xo,
Jeanne