The Field of Narcissus Flowers 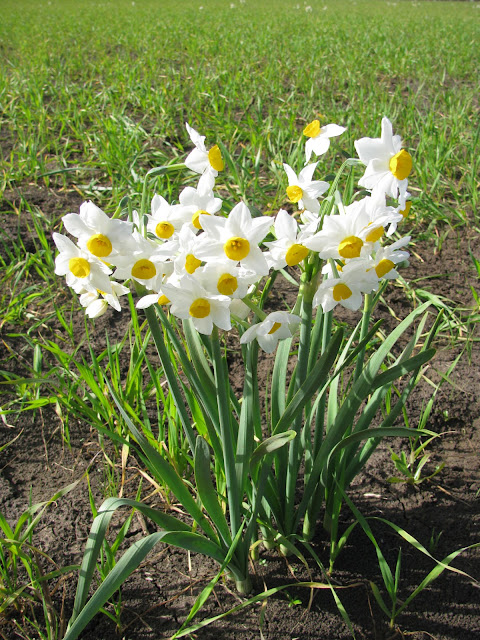 Sadeh HaNarkisim, the Field of Narcissus Flowers, is a field north of Tel Aviv, in the Glilot Junction area, one of Israel's busiest traffic arteries. It is one of Israel's largest wild narcissus, or daffodil, fields, and attracts local nature lovers, especially in early winter, when the plants begin to bloom. I first heard about this particular field a couple of years ago but it was not the right time of the year to visit. Recently Mister Handmade in Israel and I ventured out to see the blooming daffodils, though my partner in crime wasn't wearing the right shoes (early winter is also the start of the rainy season and therefore it was quite muddy!) and he ended up staying in the car whilst I went off to explore! 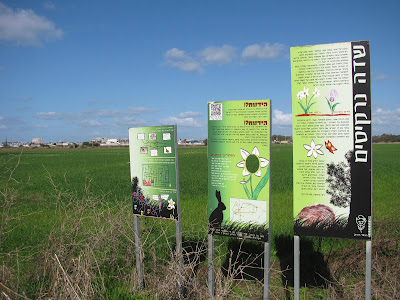 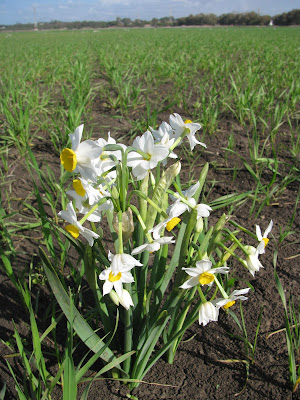 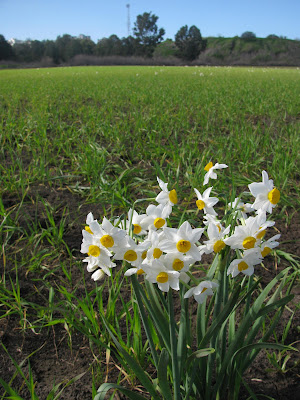 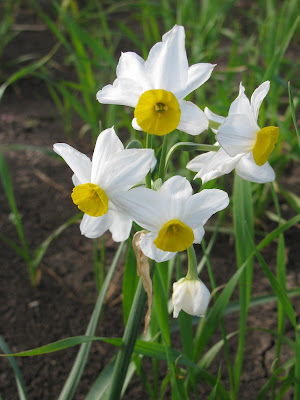 The daffodil field is in an agricultural area, one of the last remaining ones in urban Gush Dan. Besides daffodils, the field contains another 220 species of flora and fauna. Between February and April you can see anemones, Iris palaestina, purple irises, gladioli and other spring flowers. If you are lucky you might also see a hare rushing to a hiding place, or a porcupine, the largest rodent in Asia. Chrozophora tinctoria, a plant species native to the Mediterranean that is in endanger of extinction, also grows there. It produced the blue-purple colourant turnsole used in medieval illuminated manuscripts and was also used as a food colourant. 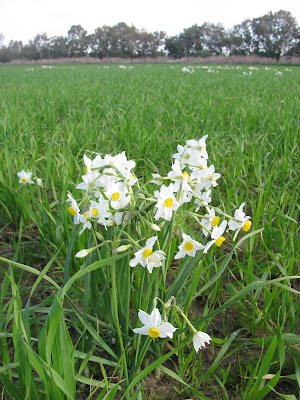 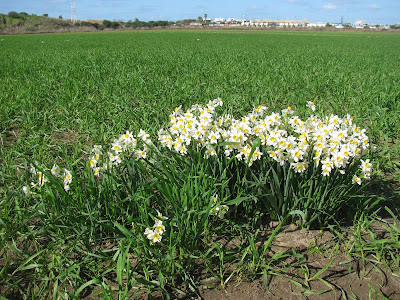 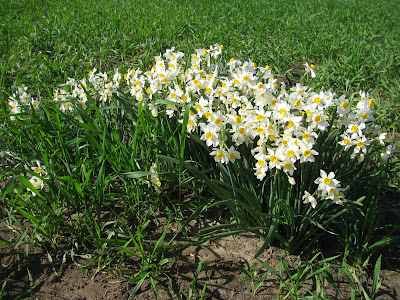 Daffodils have special cultural significance in many cultures. In Greek mythology the flower is seen as a symbol of vanity, while in China it is considered a symbol of wealth and good fortune.
According to mythology, Narcissus was a hunter who was known for his beauty. He was the son of the river god Cephissus and nymph Liriope. He was conceited and despised those who loved him. Nemesis noticed this behaviour and one day drew Narcissus to a lake, where he saw his own reflection in the water and fell in love with it, not realizing it was only an image. Unable to leave the beauty of his reflection, Narcissus lost his will to live. He stared at his reflection until he died. In that place the narcissus flower grew.

Narcissus is the origin of the term narcissism, a fixation with oneself and ones physical appearance. 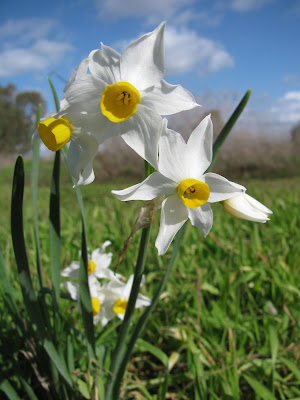 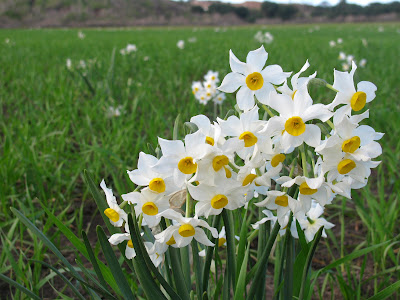 Now imagine that this field of narcissus flowers has vanished. The area is designated for construction, though a detailed plan has not yet been approved. The Israel Antiquities Authority has excavated in the area in order to ensure construction does not destroy any archaeological sites there. However, instead of green fields, daffodils, and animals, how terrible would it be to see only concrete, cars, soot and buildings?
"The area in Glilot, where a new neighbourhood is designated to be built, contains relics of the old Tel Baruch Samaritan burial site," the Antiquities Authority said. "Past digs revealed burial systems, mosaics and agricultural facilities."
The daffodil population in Israel has suffered in the past from drought and also from over-picking. Today it is a protected flower, one of the nicest and most common in Israel. It would be so sad to see this field, Israel's second largest wild daffodil field, disappear.

* This post has been shared on Creative Mondays, The Good. The Random. The Fun., Monday Mellow Yellows, Our World Tuesday, Pictorial Tuesday, Tuesdays with a Twist, Travel Tuesday, Wow Us Wednesdays, Wednesday around the World, Outdoor Wednesday, Wanderful Wednesday and Floral Bliss.
Posted by Handmade in Israel at 08:16

Thank you for this interesting post. I would imagine that your climate was too hot for narcissus. Isn't it odd that this beautiful flower has given name to that awful self-loving & egoist person type! Thank you for linking - wishing you a great day!

I love narcissus flowers. In Poland, they are a sign of spring...

So lovely! How fun to see these glimpses of Israel!

Love the beautiful and creative floral shots ~ wonderful photos ~ thanks,

Wishing you a Happy and Peaceful Week ~ ^_^

They are so pretty! Daffodils are common here too in the Spring. I planted some bulbs in the fall but squirrels dug them up so I am no sure if any will come up. How interesting about the narcissus symbolism. It is great seeing something like this being preserved for generations to enjoy.

Really pretty - Daffodils are the first signs here in Australia that Spring is coming. I enjoyed your post :D)

So lovely and such a wonderful reminder of Spring here is USA. Even though we've barely begun winter and it hasn't even been that blustery cold really yet, I'm already looking forward to Spring. I always love seeing those flowers around the neighborhood, but I've never planted any. Thanks for sharing and visiting me. :)

Oh I can't wait for the spring flowers to start appearing

beautiful daffodils... my daffodils are yet to bloom.. :)

Such beautiful faces that bloom in the spring. Thanks for posting.

How wonderful to have these lovely flowers in winter. It's a shame that the field is destined to be removed.

Seen a porcupine? I think you need Dutch wooden shoes when you go hiking there. That's better for your hubby's shoes :-) It must be so amazing to see a whole field with this flowers. I hope they don't build on this place in the future. A nice area for flora and fauna and archaeological treasures.

Gorgeous! Isreal really is so lovely and so diverse. I was really impressed when we visited in 2010!

So very pretty!
I hope the area will always remain a field of flowers!

I always associate the daffodil just with England. It was fascinating to read all about it here. What a shame if this field ends up under concrete. Can't they move the plants to a park or something so that everyone can continue to enjoy them? Sarah x

The narcissis made me so happy but then your news about a possible construction site made me sad, because of the history as well as the flowers. I'm sorry to know that this kind of thing goes on everywhere not just here (though I greatly fear there will be more and more destruction of our natural world under our current 'regime'.)

I do love daffodils and narcissis --- these spring flowers don't do well here in Florida (where we spend winter) because it's too hot, but when we lived in Oregon all year round we used to grow them, so they bring back lovely memories.

I really don't see narcissus in Florida - too hot I thought. If they grow in Israel, may be they would grow here. Wild narcissus sounds wonderful.

A Green and Rosie Life said...

It will be a few more weeks before our daffodils appear in Normandy, France and we are lucky to have wild ones here - although more yellow than your Israeli ones. I hope those who can make a difference see sense and the daffodils are not lost to concrete #TuesdayswithaTwist