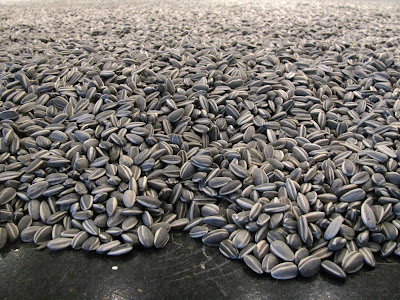 If I was to be honest, the primary reason for my recent visit to the Israel Museum was to see the Dan Reisinger exhibition, though the exhibition "Maybe, Maybe Not" by the Chinese artist Ai Weiwei, which was the big crowd-puller this summer, made my visit even more interesting.
On display for the first time in Israel, Ai's artworks included sculpture, photography, video, and his large-scale installation, "Sunflower Seeds", above. This covered the entire floor of one of the upper galleries of the museum with 23 tons of sunflower seeds, each one sculpted from porcelain and painted by hand in the city of Jingdezhen, in northeastern Jiangxi province. The town once made porcelain for the imperial court and has been saved from bankruptcy by making sunflower seeds! 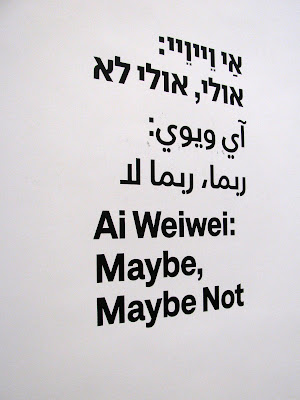 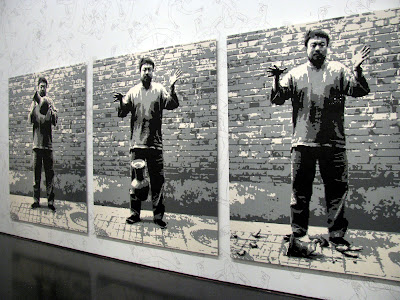 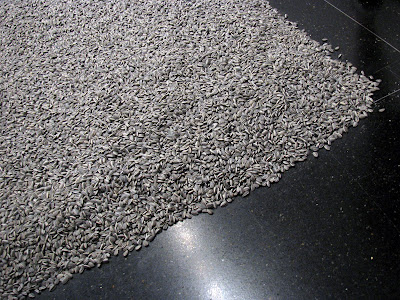 Born in Beijing in 1957, Ai Weiwei is an artist and an activist, and has also been an outspoken critic of the Chinese government. His father, Ai Qing, a poet and prominent intellectual, was exiled to a labour camp when Ai was one year old, and the family was only allowed back to Beijing in 1976. He began his career on the burgeoning contemporary art scene of Beijing, but took the first opportunity to leave China for the United States in 1981. He returned in 1993 to care for his ailing father and became involved with the early Chinese avant-garde, organizing exhibitions and publishing underground books. In 2006 he started blogging, becoming a popular and unfiltered voice on political, aesthetic and societal concerns. He was detained in 2011 for 81 days without trial and had his passport confiscated for four years. He is now based in Berlin but is a hugely influential figure in China and is one of the leading Chinese artists. 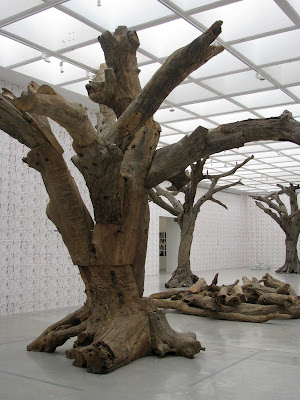 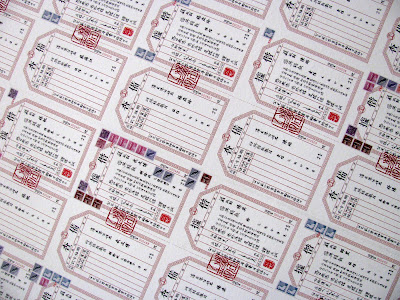 Ai's works are typically massive in scale, often requiring the assistance of dozens and sometimes even hundreds of highly skilled craftsmen and craftswomen. They are politically edgy and address subjects such as labour and working conditions, the eradication of tradition in the name of development, censorship, migration and displacement, and Chinese history - recent and distant.
His "Trees" (2010), above, comprised of dead roots, trunks and branches the artist gathered in the mountains of southern China, reference the ancient tradition of collecting dry wood in appreciation of its form. The work combines different species to create a semblance of a tree, and the pretence is only apparent upon closer inspection. This exhibition, which was spread out over a number of galleries, also included examples of Ai’s signature wallpaper, the design below depicting the plight of refugees while mixing in classical images, giving it the look of a frieze from ancient Greece. 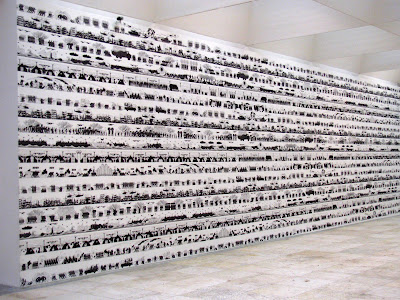 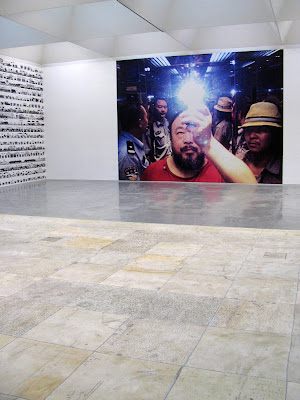 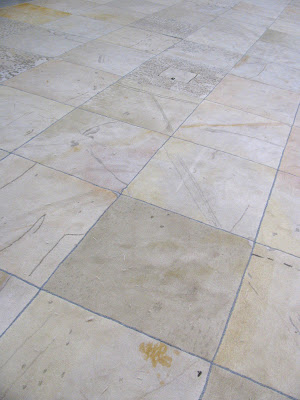 His "Soft Ground" installation, above, has particular resonance for Israel. The 250-square-metre hand-woven carpet carefully replicates the floor of the Haus der Kunst in Munich, where the Nazis once displayed art they deemed worthy. The carpet, which was created in a weaving mill in Hebei province, took a day to bring into the museum and takes up nearly the entire floor of one gallery, with visitors allowed to walk on it barefoot.
"Dropping a Han dynasty urn" (2016) comprises three mosaic images made of Lego bricks that document an art performance carried out by Ai Weiwei in 1995. As material for his art, Ai Weiwei draws upon the society and politics of contemporary China as well as cultural artefacts such as ancient Neolithic vases and traditional Chinese furniture, whose function and perceived value he challenges and subverts.
In the wonderful sculpture "Kippe" (2006), below, he stacks pieces of dismantled Qing dynasty temple wood into a neat rectangular pile like firewood, suggesting a throw-away response to a long and valuable history. 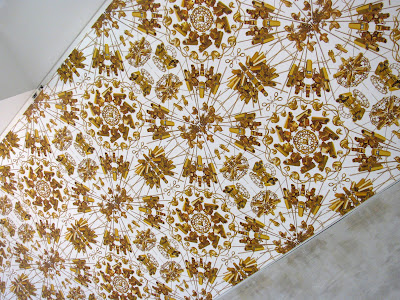 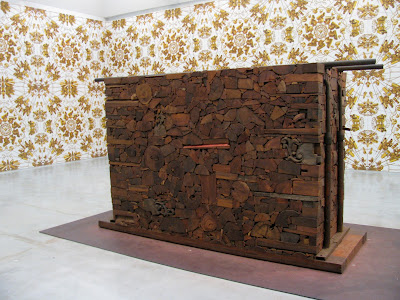 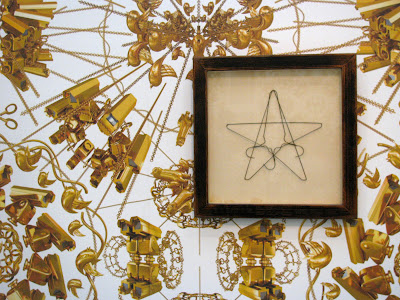 From afar, this decorative wallpaper, above, seems to belong in a palace rather than a museum. Only from close up we can see that the gilt ornaments are made up of surveillance cameras, chains, handcuffs and more. Ever since the Chinese government installed a battery of surveillance cameras around Ai Weiwei's home, these items have become a recurring motif in his work. The wallpaper, which covers and thus conceals the wall, is a cynical allusion to the way tyrannical powers cover up their repressive acts and spy on their citizens.
His "Bicycle Basket with Flowers" (2014), below, refers to his time under house arrest. Ai Weiwei was prohibited from talking to the press, so he protested his incarceration silently by setting out a bicycle in front of his compound and placing fresh flowers in its basket every day. For the sculpture, the basket has been replicated in porcelain and filled with porcelain blossoms. These were made in Jingdezhen, a centuries-old town in China famous for its porcelain manufacturing and where Ai also had his "Sunflower Seeds" made.
For Ai, sunflower seeds - a common street snack shared by friends - carry personal associations with Mao Zedong’s brutal Cultural Revolution (1966–76). While individuals were stripped of personal freedom, propaganda images depicted Chairman Mao as the sun and the mass of people as sunflowers turning towards him. Yet Ai remembers the sharing of sunflower seeds as a gesture of human compassion, providing a space for pleasure, friendship and kindness during a time of extreme poverty, repression and uncertainty. "Sunflower Seeds" expresses Ai Weiwei’s responsibility as an artist, "Seeds grow...The crowd will have its way, eventually." 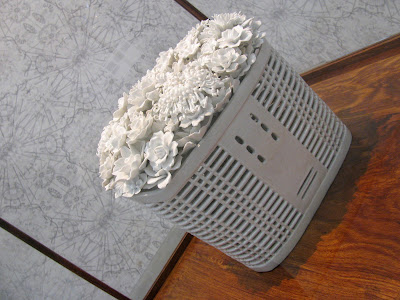 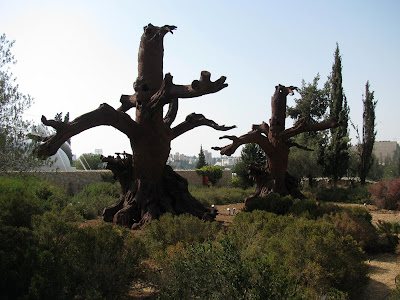 The exhibition "Maybe, Maybe Not", also premiered Ai Weiwei's new "Iron Tree" (2016), above, which is situated among the olive trees that line the Israel Museum’s promenade. The trees, which are over 8 metres tall and weigh 14 tonnes, are cast from nearly 100 fragments of trunks, branches and roots gathered in southern china and sold in the markets of Jingdezhen. Held together by nuts and bolts, the sculptures look at first glance like natural trees but a closer look reveals the illusion. By leaving them outdoors, the iron trees rust and become covered in a patina that endows them with the texture of natural trees. This allows them to blend with the Jerusalem vegetation - mainly olive trees and rosemary bushes - that surround them. Consequently, the trees-turned-sculptures complete the cyclical journey from the natural to the artificial and back to nature again.

* This post has been shared on Pictorial Tuesday, Our World Tuesday, Wordless Wednesday (on Tuesday), Wednesday around the World, Seasons, {wow me} wednesday, Wow Us Wednesdays, Wednesday Blog Hop, The Happy Now and City Tripping.
Posted by Handmade in Israel at 08:53

Wow, this is a fascinating and informative post. I'd never heard of this artist, and although it is not typical of the art I generally enjoy, it is quite compelling. I am so glad you took the time to explain what we were seeing.
Thank you for sharing at https://image-in-ing.blogspot.com/2017/10/beauty-on-wing.html

What an interesting exhibit! The sunflowers seeds installation must have taken years to accomplish. Those trees are amazing!

I am blown away by the idea of the sunflower seeds being made and so many. Looks like an awesome art exhibit. Thanks for sharing.

Feel for the Chinese artists - they really need to live outside China if they want to develop their art, and Berlin is a good city to "hide" in. By their government, people like WeiWei are seen as political dissidents, but I think their intention is not to gain political favor, but an expression about their strong feelings. He has important things to say, and I can see why he has a large influence.
Thank you Lisa, I really enjoyed this!

What a great exhibit. The stories behind the pieces make them much more interesting.

This post is an exceptional one. The works of this artist is truly spectacular and awesome! I feel for him, and i salute him for suffering to be himself. At least he is a great artist, or else he will just be dead like the others. I am awed mostly of the grandeur of his art, can't imagine those sunflower seeds each made of porcelain. Thanks for this, and the very beautifully written information.

Great post! I really respect Ai Weiwei and how he speaks out about China and the regime through his art. I missed the sunflower seeds when they were in London but look forward to his work returning to the UK sometime soon. Thanks for linking #citytripping

I love to read about him! Thank you so much.