"Rock Paper Scissors" at the Tower of David Museum 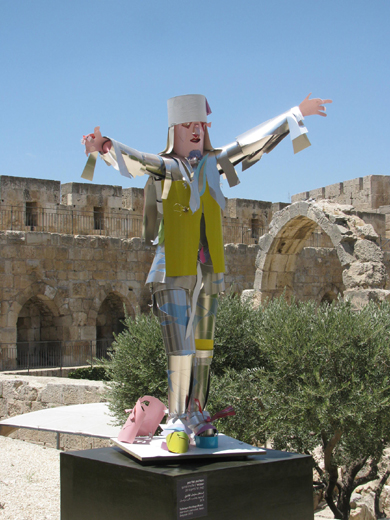 It's been a busy summer and I have a lot to show you, starting with a wonderful exhibition I visited back in July at the Tower of David Museum in Jerusalem's Old City. The exhibition "Rock Paper Scissors" presents the work of Karen Sargsyan who was born in Yerevan, capital of Armenia, in 1973. He studied martial arts at a sports college, excelling in boxing, and was a professional boxer for seven years. During his sport studies Sargsyan took anatomy courses. The workings of the body, muscles and joints fascinated him and the results can now be seen in his sculptures.

Owing to the unstable political and economic situation in Armenia, Sargsyan moved with his family to the Netherlands in 1998 where he began working in drawing and sculpture and was accepted to the prestigious Rijksakademie in Amsterdam. Sargsyan is regarded as one of the leading paper artists in the world. His works have been displayed in museums worldwide, including the Tate Modern in London and the Centre Pompidou in Metz. 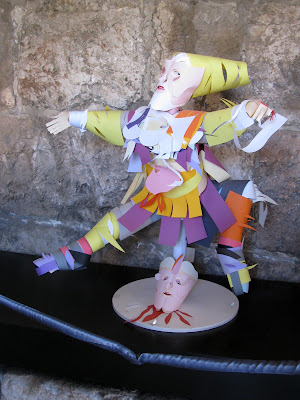 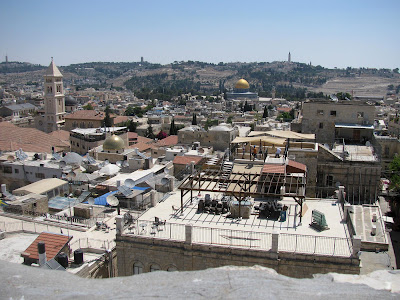 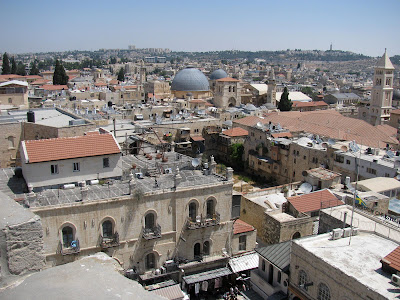 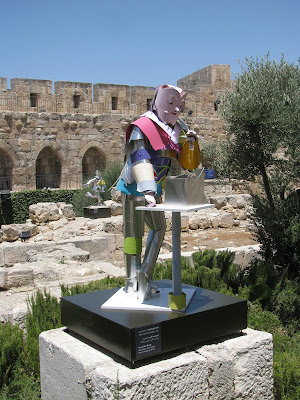 In the Tower of David Museum exhibition Sargsyan uses the stories, legends, myths and history of Jerusalem as a basis for his sculptures, bringing several personalities from the long history of the city "to life". Nine spectacular figures, all of whom at some point in history had influence over the city of Jerusalem, can be seen within the museum's archaeological garden and citadel. These range from King David, King Solomon and the Queen of Sheba, to Cyrus of Persia, Herod the Great, Queen Melisende and Suleiman the Magnificent, as well as the more modern public figures of Anna Ticho and Eliezer Ben Yehuda. (Unfortunately the figure of Ben Yehuda had been removed on the day I visited.) 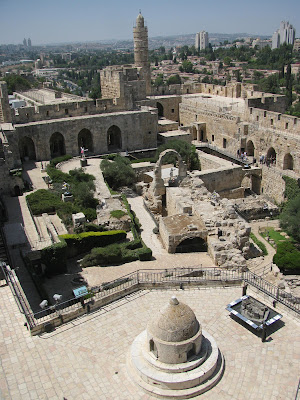 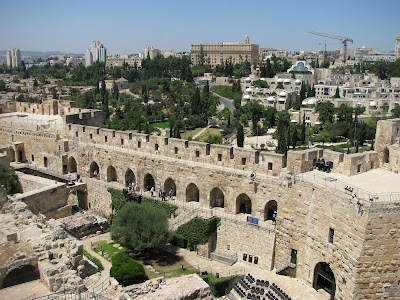 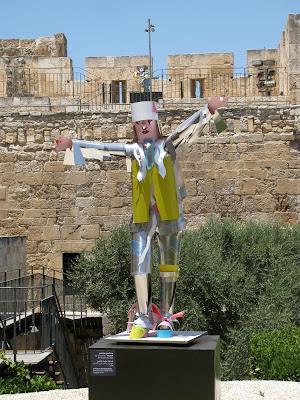 The exhibition posed a new challenge for Sargsyan. Though most of his work has been using paper, for the first time he was presenting his works outdoors, so he had to find materials which would survive the weather. Additionally, the material had to yield to his knife with a similar flexibility to paper. These two considerations led the artist to create almost all of the figures in the exhibition using very thin sheets of coloured aluminium, cutting them either before or during his work. He used over 100 kilogrammes of aluminium sheets and 2,500 knives, all of which he transported from Amsterdam to his makeshift studio in Israel. 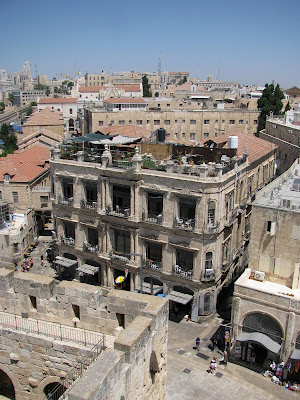 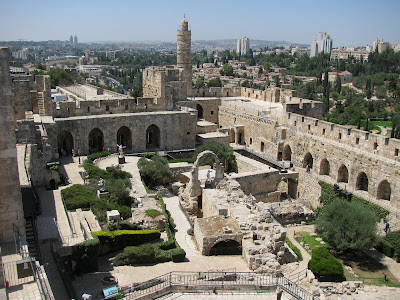 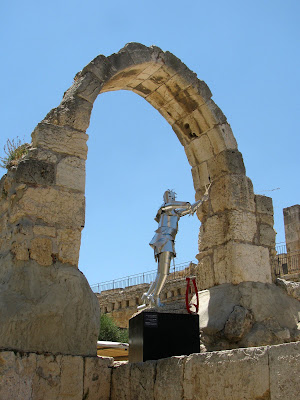 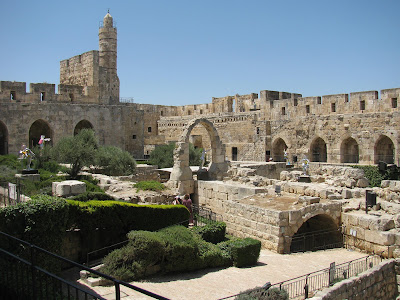 Sargsyan created each of these sculptures without sketching the figure beforehand. His creative process is spontaneous and relies on very little planning, though he does use a wooden frame as a general outline for his works and the face mask is common to all his figures. For the most part, however, he relies on intuition to produce his multi-layered sculptures, which are full of depth and humour and often seem as if at any moment they will burst out of their paper shell and spring to life. 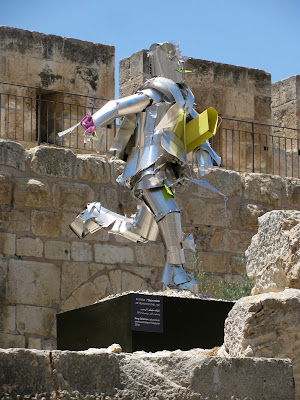 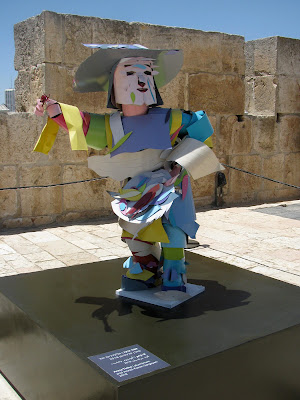 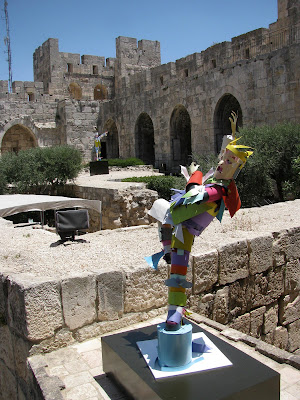 The Tower of David, also known as the Jerusalem Citadel, is an ancient citadel located near the Jaffa Gate entrance of the Old City of Jerusalem. The citadel that stands today dates to the Mamluk and Ottoman periods. It was built on the site of a series of earlier ancient fortifications of the Hasmonean, Herodian-era, Byzantine and Early Muslim periods, after being destroyed repeatedly during the last decades of Crusader presence in the Holy Land. It contains important archaeological finds dating back over 2,000 years including a quarry dated to the First Temple period, and provides some of the best 360-degree views across the Old City and Modern City. It is also a popular venue for concerts and sound-and-light performances. Some readers of this blog may remember the Koolulam social-musical initiative in which I participated back in June, which took place within the grounds of the ancient citadel.
The name "Tower of David" is due to Byzantine Christians who believed the site to be the palace of King David. They borrowed the name "Tower of David" from the Song of Songs, attributed to Solomon, King David's son. 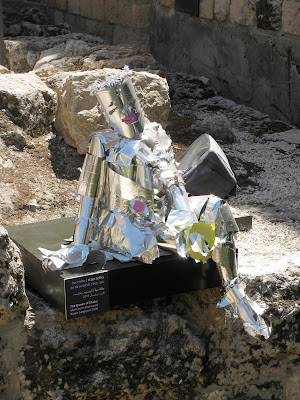 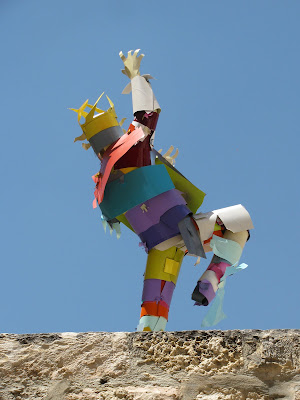 Whilst it was the "Rock Paper Scissors" exhibition that drew me to the Tower of David Museum, I was fortunate to find another interesting exhibition, "London in Jerusalem", on at the same time.
On 11th December 1917, on the steps of the Tower of David, General Allenby proclaimed British rule and in 1922 the British implemented the Mandate established by the League of Nations. British rule over Jerusalem lasted thirty years, a mere moment in the 3,000 year history of the city. However, in this brief moment, Jerusalem was dramatically changed. When the British took over Jerusalem they found a very poor city, rampant with cholera and no sewage system or electrical lighting to speak of. Governor Ronald Storrs took over the leadership of Jerusalem and brought orderliness and culture to the life of its residents.
The exhibition "London in Jerusalem" examines the extensive cultural activity that the British, Arabs and Jews took part in during the British rule, exploring the music, past-times, drinks, news and cinema of the period. 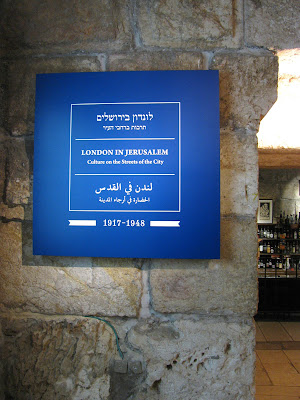 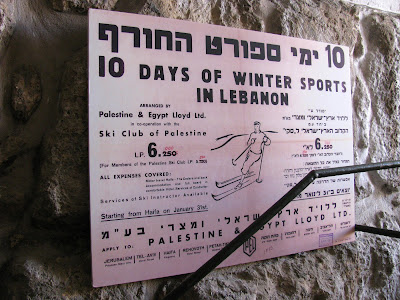 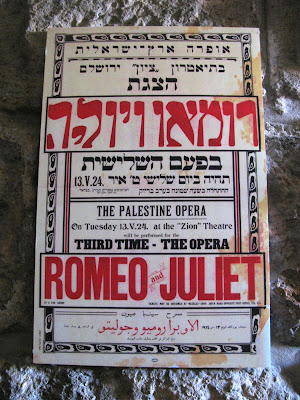 Jerusalem became the place for extensive social activity. Choirs were formed, as well as dance troupes and theatres, coffee houses and cinemas, private salons and public cultural events, football pitches and universities. New initiatives were established which boosted the economy and culture of Jerusalem.
The Tower of David exhibition has recreated a Mandate-era cinema, radio entertainment from the 30s and 40s, soirées in the living room and Fink’s Bar. If there was one place that held the secrets of Jerusalem during this time period, it was Fink’s Bar, below. It was here that British officers and locals brushed shoulders, where Jewish resistance fighters and English gentleman would share the bar. In the centre of the exhibition are tables and chairs that one might have found in the many tea houses that started springing up around the city. 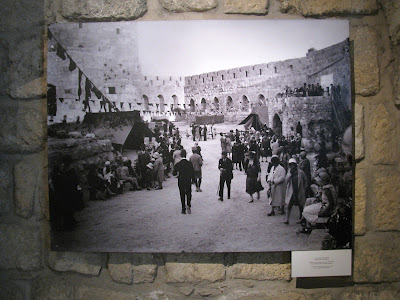 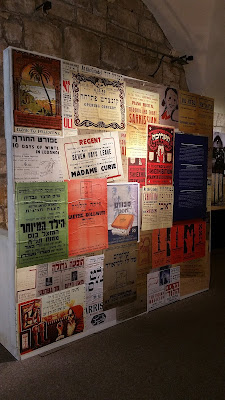 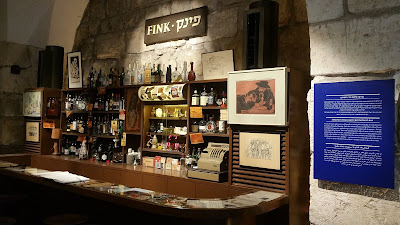 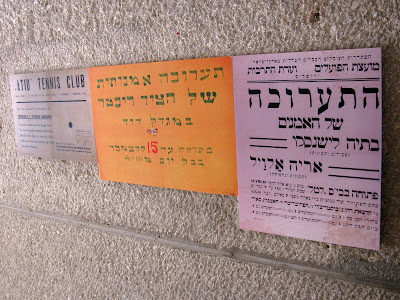 The "London in Jerusalem" exhibition highlights the amazing cultural life in Jerusalem under the British Mandate, turning away from the political, religious and symbolic aspects of Jerusalem that usually occupy our attention. For this Brit living in Israel, it was a wonderful way to end my visit to the Tower of David Museum on a hot and sunny July day. 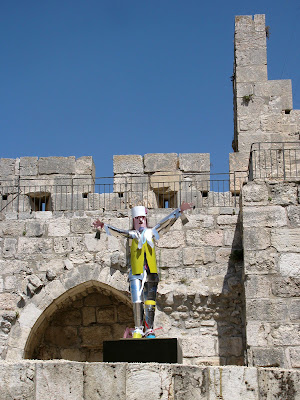 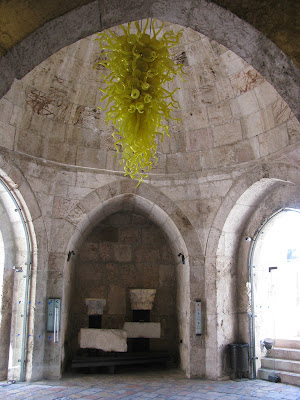 * This post has been shared on All Seasons, The Good. The Random. The Fun., Wordless Wednesday (on Tuesday), Tuesday's Treasures, The Keeping It Real Link Up, Pictorial Tuesday, Wednesday around the World, Wednesday Link Up.

Posted by Handmade in Israel at 07:26

What amazing art work and in such a magnificent setting. I can fully see the lure of the Tower of David. It's also nice to see that us Brits managed to do a little good for another country, even if it did mean imposing our culture on others, you can go a long way with a little sewerage and electricity.
Fascinating post x
#mmbc

What an awesome exhibit! Those views are just the best.

I like things that "shine". Very thin sheets of colored aluminum ... how interesting. Thank you for sharing this cool art!

Fascinating art - thanks for sharing! #MMBC

What a fantastic day out...
The art work is amazing! #MMBC

Two brilliant exhibitions. Good to know that the Brits had such a positive impact. Will you be branching out into Aluminium sculptures?!! xx

What an amazing venue for the sculptures, Lisa, and the ingenuity to adapt them for outdoors. Quite extraordinary! Thanks so much for sharing. :) :)

Oh wow, those sculptures are fantastic! And the ‘London in Jerusalem’ exhibition sounds very interesting too. Fascinating history... x #MMBC

I enjoyed your post, thank you very much. I have learned more about countries through blogs than I did when I was in school long ago. I love that. I appreciate you giving background about the artist. His sculptures, of which I'm in awe, give off a lot of energy and emotions.

Marvelous post, and the photos are fantstic! I'm so glad you shared at https://image-in-ing.blogspot.com/2018/09/a-bit-of-bluegrass.html,

Amazing pictures. Looks like a fascinating place to visit!

I love the juxtaposition of the art against the historical scenery of the city. Thank you for all the background information. Some I am aware of, but some is new to me. Jerusalem is such a pivotal, historical city for many cultures and religions. All of her history is fascinating...as well as sad on many fronts. Beautiful art and beautiful photography.

very very interesting, thanks for sharing

Wow! This work is amazing! Right up your alley too. :) The site is an awesome backdrop that must have been an honor for Sargsyan to display at. How interesting that he could use aluminum in place of paper.

Having a little trouble mixing these two things in my mind...the historic, Biblical architecture and scenes with the modernist sculpture, sometimes reminiscent of the Tin Man on the Wizard of Oz! His work is interesting, but I think the venue was wrong.

Such diverse cultures. The old world and the new art! #keepingitreal

Love the look of Jerusalem, always wanted to visit. The art however (and don't shoot me) but Im afraid it's not for me, clever I admit, but doesn't float my boat and in my opinion detracts from the natural beauty and history of the surroundings.

Very unusual artwork and such talent. Enjoyed seeing your sharing at Pictorial Tuesday. Thanks.

What a fascinating museum and I love the look of that exhibition - will it be a permanent fixture?

The paper artwork in the museum is creatively awesome!

Thanks for informing me on an area I haven't really explored!

How whimsical and unexpected. Have a great weekend.

What amazing artwork! It's interesting how he improvised with his materials, very clever. Thanks for showing us around Lisa and for sharing with #MMBC.

Have a lovely weekend. x

What extraordinary sculptures. I've kept going back and forth on them. They really don't look like they would survive outside for any length of time. I bet the British rule over Jerusalem seems a world away from today.

Wow lovely . Please tell something about my captures on my blog.

Hi Lisa, how creative must Sargsyan be to be able to create these paper people sculptures almost off the cuff? They look quite detailed in your photos, so I can imagine how detailed they are in the 'flesh'. The London In Jerusalem sounds like an interesting exhibition. Anything that shows multiculturalism in a positive light can only be a good thing.

Thank you for linking up with #keepingitreal.

What an awesome exhibit! We haven't visited the Tower of David museum yet, but I'm hoping to go on our next trip when the kids are a little older.