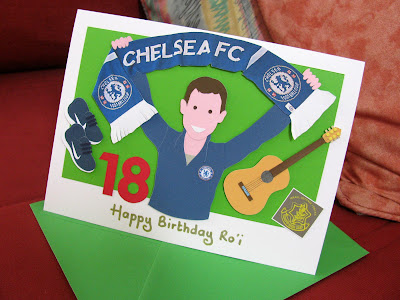 Ro'i's mum liked the birthday card I made for my eldest son back in November and asked me if I could make a similar card for her son's 18th birthday, only this time with a Chelsea F.C. scarf rather than an Arsenal one. 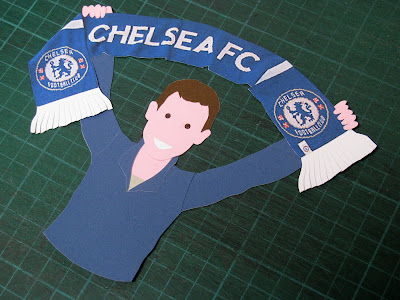 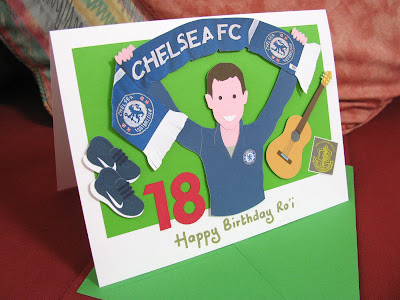 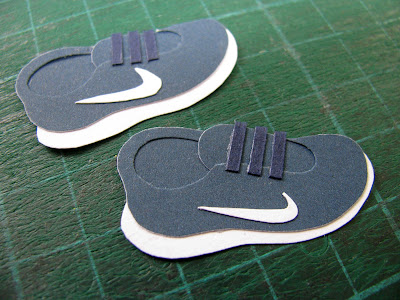 Like my son, this young man will also soon be going into the Israeli army. His pre-army training so far has included crawling, carrying a stretcher and running up and down sand dunes...  I summed this up by including his running shoes and the badge of the Israel Defence Forces on his card. Mum asked me to add a guitar as well. Ro'i is wearing his blue Chelsea track jacket with the club crest on it. A big red number 18 marks his age.

"I LOVE the card" mum wrote to me. "A million thanks." 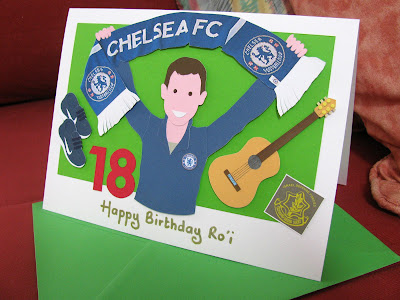 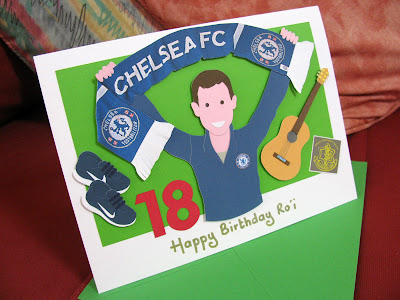 * This post has been shared on All Seasons, Sweet Inspiration Link Party, {nifty thrifty sunday}, Happiness is Homemade, Sunday Features, Creative Mondays, The Good. The Random. The Fun., Made By You Monday, Make it Pretty Monday, The Happy Now Blog Link-Up and Our World Tuesday.

Posted by Handmade in Israel at 07:59

Vary beautiful detailed card.. the shoes are particularly awesome! What a fine work.

I can understand why she wanted a card similar to your son's - your cards are so beautiful!

What a lovely card to receive on your 18th birthday! I love the detail in those trainers.

Thanks for sharing with #MMBC. Hope you've had a good weekend. x

Your cards are so thoughtful. I'm glad there are people like yourself who can interpret people's desires in art.

Amazing little folds in the scarf! Your work is awesome.

What a great and creative idea. Another lovely card Lisa :)

Thanks for sharing at Creative Mondays, hope you can join us soon at the Wednesday blog hop or on Friday for the weekend blog hop.

I love how detailed it is, and I'm super impressed by your work! What a wonderful keepsake for him! Thanks so much for sharing at Sweet Inspiration!

Awww I love the detail ,so clever X #mmbc

The scarf on the card looks great, Lisa! Eightteen years is a great birthday for guys - I think it can take the place of a Bar Mitsvah for the ones who are not Jewish. (also since the girls have "sweet Sixteen" in the USA)
Thanks for wishing me warmth:) I finally get to wear the winter clothes and scarves and boots I have collected over the years:):)
Many thanks for sharing with All Seasons, Junieper/Jesh StG

Glad to see the reds and the blues are both represented (at some point!) Thanks for sharing with #PoCoLo

I can understand why they called it a white elephant. I never heard of the Brutalist style but the description seems to fit.