The Summer of Animal Love 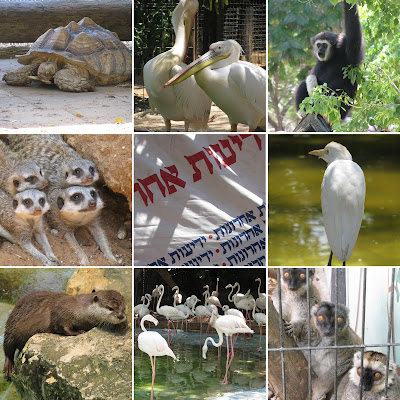 We've all heard of The Summer of Love. Well, my summer is turning out to be The Summer of Animal Love! Every holiday photo that I post here seems to be animal related, but then I guess that happens when you have two boys who love animals, and are greatly encouraged by Mum and Dad! Israel is full of ancient sites and historical buildings, and we of course have visited many of those places over the years, but the boys at the moment love their animals, and that is fine by me.
This week we had another family day out, based around a prearranged tour of the Yediot Acharonot newspaper printing works in the city of Rishon LeZion, the fourth-largest city in Israel. The boys were underwhelmed by the idea of the trip but in the end found it quite interesting and were fascinated by the "giant machines" printing 21 tabloid newspapers per second! Though we were not allowed to take photos inside the printing works, the photo in the centre of my mosaic shows some of the newspaper's title on a flag outside. I thought you might find the Hebrew lettering interesting.
After our tour we headed straight to Hai-Kef, a modest zoo in Rishon which is home to a variety of rare animals. There was no petting corner this time, but the boys enjoyed watching the big animals and laughing at the cheeky little squirrels and meerkats.
We finished off the day eating pizza at our local takeaway and all agreed that it had been another great summer holiday day out. 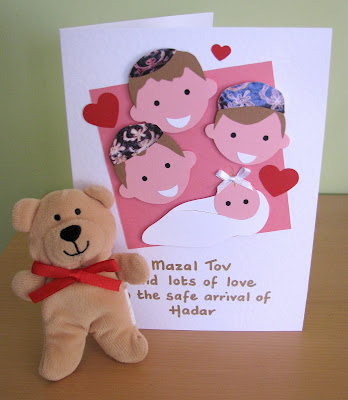 I recently told you of a friend who had given birth to her first girl after three boys. You can see the card that I made for her, above, showing her boys doting on their new little sister. My friend and her husband were both thrilled with the card and said that the boys had had great fun discussing who was who. Their little sister seems to be settling in nicely and I hope that they continue to dote on her as much as I have shown them doing on the card!
Posted by Handmade in Israel at 15:39

Love your animal inspired photo mosiac - it is wonderful that your boys are so interested in nature and animals.