I have been quite busy creating lately and am excited to show you several pieces that I have completed. However, I don't like to reveal my creations until the big day has passed - be it a birthday, wedding or Bar Mitzvah - so that the person who is on the receiving end of the 'Handmade in Israel' goodies sees it first. Therefore a few pieces are 'on hold' for the time being, though I promise to show them to you once the time comes. In the meantime, I can now show you several cards that were delivered some time ago. 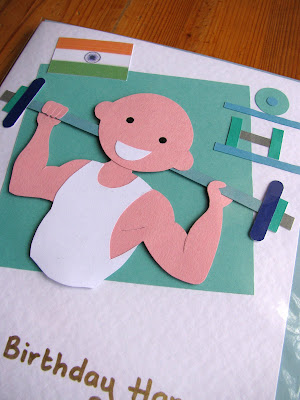 Back in January of this year I showed you a card for the soccer-loving son of a good friend of mine. At the time I mentioned that I had also created cards for the rest of the family and am now able to show you two more of them since their respective birthdays have gone by.
Above you can see the card that I made for Dad. I was told that he goes to the gym a lot and has been doing some serious bodybuilding, so that was the theme to go with. It was also requested that I add something Indian in the background, since the family are currently living there. I know that 'Dad' is somewhat 'follically-challenged' and did check first before I illustrated him with a bald head, just in case it was going to insult him. Fortunately it seems that he laughed when he received the card and was amused at his big, bold figure!
I am told that their youngest son's card, below, was "an amazing success". My friend assures me that it looks just like him and he was thrilled with it. For this card I was informed that the birthday boy is always painting and cutting and glueing (a boy after my own heart!), thus I have shown him sitting at a table, brush in hand and paint pot at the ready.
There is one more birthday to go. I hope that 'middle son' appreciates his specially commissioned birthday card as much as his brothers and Dad seem to have done. 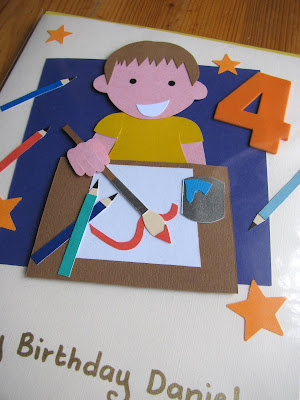 Finally, just before Passover, whilst I was busy with my holiday preparations, I received an e-mail request to make a 70th birthday card for a gentleman who is a pharmacist and likes playing bridge. With little time for crafting, I came up with a simple yet, I hope, effective card, below. I illustrated a pharmacy bottle and pill pot, along with a winning hand. Once again, I am pleased to say that it seems to have been well received.
Congratulations and many happy returns to all the 'boys' of various ages! 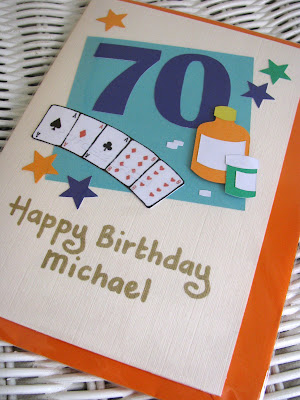 Posted by Handmade in Israel at 10:36

beautiful cards as always lisa! i love your style :)

More great cards Lisa - I bet the family look forward to their birthdays to see what personalised card they will receive.

I love the weight lifter card. It actually made me giggle! Love those muscles!
x

these are really cute! my husband is a little "follically-challenged". ha!

found you on etsy forums...I'd love it if you'd come visit me too!

So sweet and cute!
I found you on Etsy forum, too :)
Greetings from Turkey.
Sibel