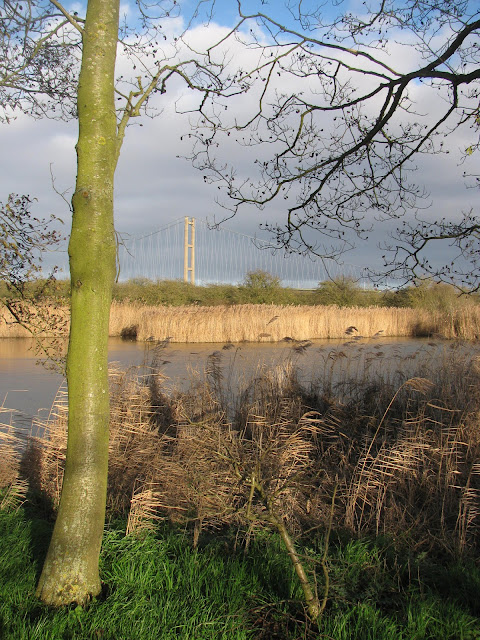 I know that we are all currently preoccupied with the coronavirus and the awful things that are going on in the world at the moment but I'm going to stick to my usual type of post and hope you can all enjoy the distraction.
I've been back to the UK again to visit my dad. It was at the beginning of February, so the weather was pretty cold in East Yorkshire, but those of you who read my blog regularly will know that the weather has to be really bad to stop me from going out to see new places!

We drove over the Humber Bridge, once the largest suspension bridge in the world, to visit the area around Barton-upon-Humber on the south bank. Our first stop was at The Humber Bridge Hotel, which is situated adjacent to one of the UK's largest nature reserves. We didn't go into the hotel but rather drove around the grounds, enjoying wonderful views of the bridge. 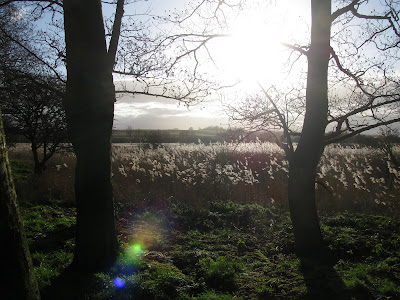 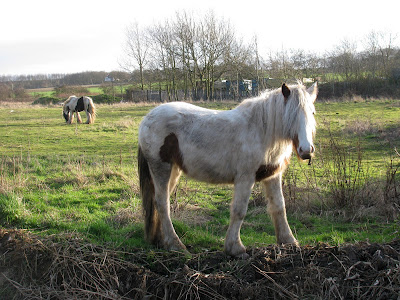 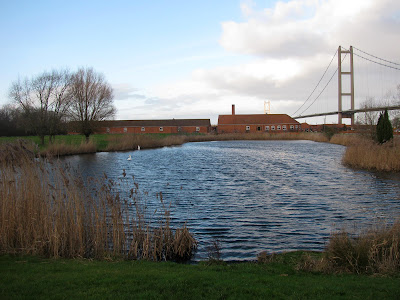 The Old Tile Works, above, is situated nearby in 17 acres of stunning rural land on the banks of the River Humber. Barton-upon-Humber has a long relationship with bricks and tiles due to the natural clay deposits found in abundance in this part of North Lincolnshire. By the late 19th and early 20th centuries there were no less than 15 working yards located in the area. The Old Tile Works, which opened its doors to the public during the summer of 2013, is a fully restored operational tile works and one of the last tile factories of its kind in Europe. The William Blyth Far Ings and Hoe Hill Tile Works have made and exported their goods for many generations and continue to produce their range of traditional handmade clay roof tiles - about 1,500,000 of them every year! One of the only significant changes to production has been the use of motorised vehicles rather than horse-drawn ones! 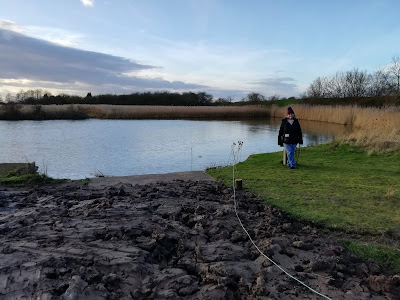 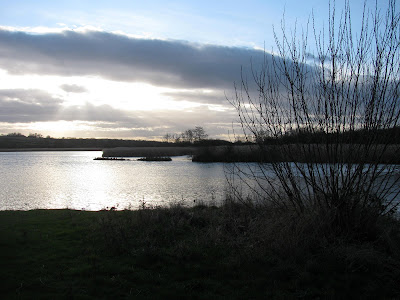 Far Ings National Nature Reserve, also situated on the south bank of the River Humber, is a major east-west flyway for migrating birds. The pits and reed beds at Far Ings and along the Humber bank are a legacy of the tile and cement industry. The industrial sites were abandoned in the early 20th century once supplies of clay began to run out. The clay workings filled with water and became colonised by species of reeds. The reserve was acquired by Lincolnshire Wildlife Trust in 1983, who opened it in the same year. It is now rich in wildlife and is one of the UK strongholds for Eurasian bitterns. There are more than 250 species of moths, 230 species of wildflower, and at least 19 species of butterflies identified from Far Ings. 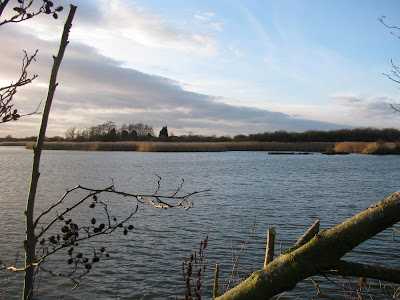 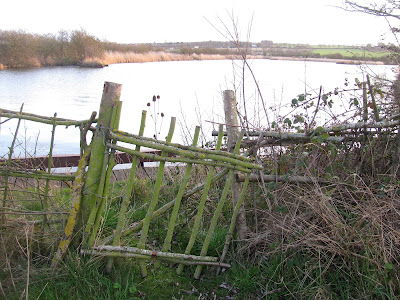 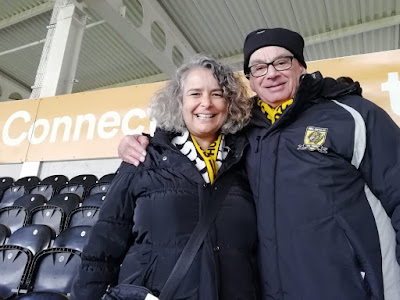 Dad and I went to see Hull City play at the KCOM Stadium, but the less said about that the better! Hull played Brentford and lost 5-1. This photo was taken before the game started when we were still smiling! 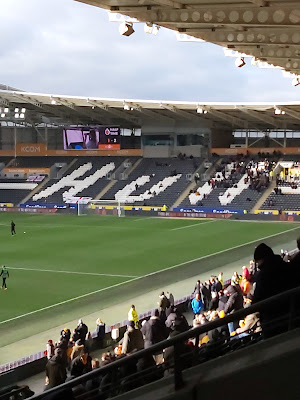 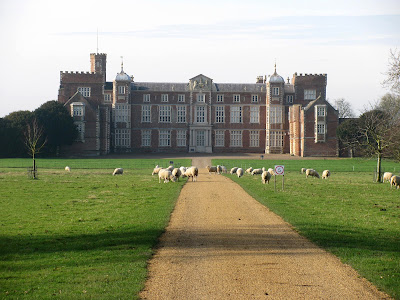 Then it was on to Burton Constable Hall, a large Elizabethan country house set in a park designed by Capability Brown. Truth be told, I wanted to visited the house, the home of the Constable family for over 400 years, but it was closed for the winter. Dad and I made do with a lovely stroll around the 300 acres (1.2 km²) park. Lancelot "Capability" Brown, who was responsible for landscaping between 1772 and 1782, created the park's two lakes separated by a dam-cum-bridge, planting clumps of trees, installing sunk fences and a ha-ha. 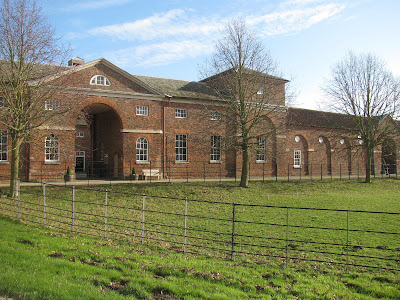 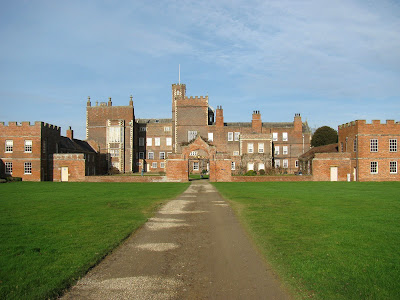 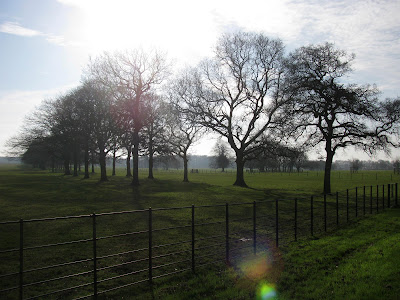 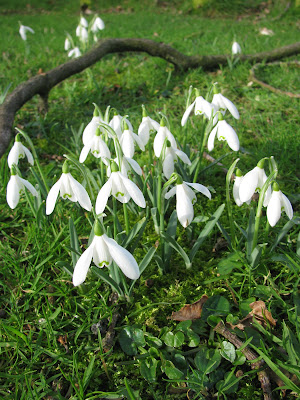 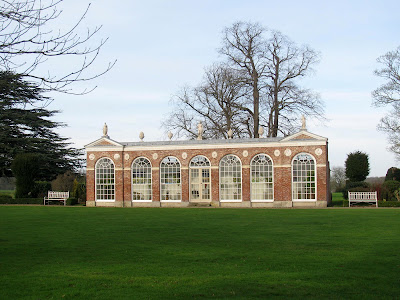 The Palladian stable block adjacent to the house, which was open to visitors, was built in 1770, replacing an Elizabethan stable block that stood to the north-east corner of the main house. We explored the Huntsman's Office, where he kept a watchful eye over the stable workers, climbed the clock tower and saw where the grooms and stable boys would have slept. The Orangery, above, completed in 1782, is a fabulous example of an 18th century hothouse and was once used for growing exotic fruits for the Constable family's dining table. 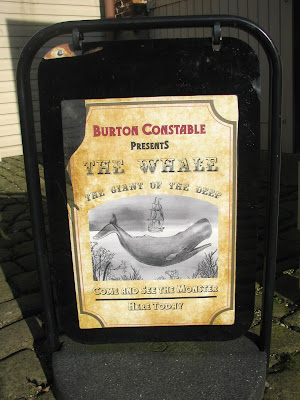 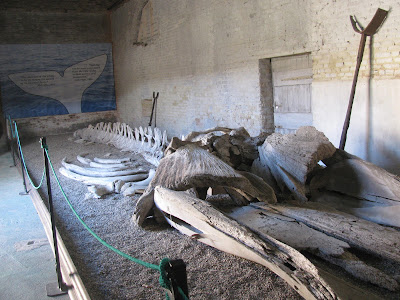 An unusual feature in the park during the 19th century was the skeleton of a 59-foot-long (18 m) sperm whale erected on ironwork. The bull whale had been stranded in 1825 on the shore at nearby Tunstall and, after dissection, was brought to Burton Constable. This famous whale also came to the attention of Herman Melville, who published his masterpiece Moby-Dick in 1851. The whale skeleton can still be seen at Burton Constable Hall, in the Great Barn, above. 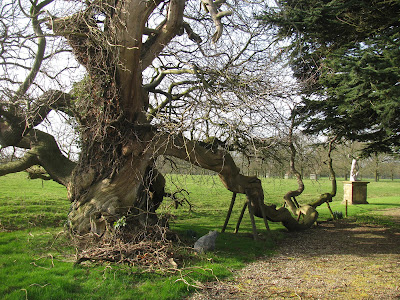 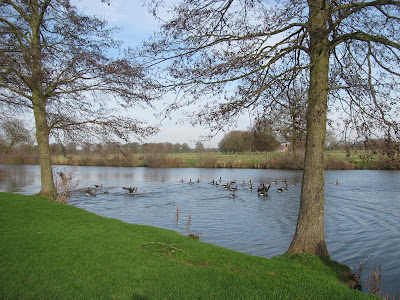 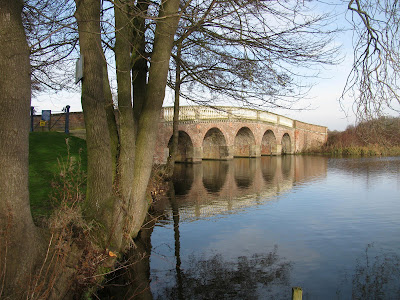 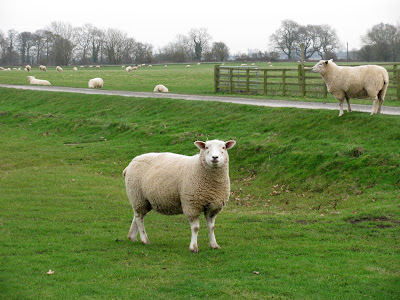 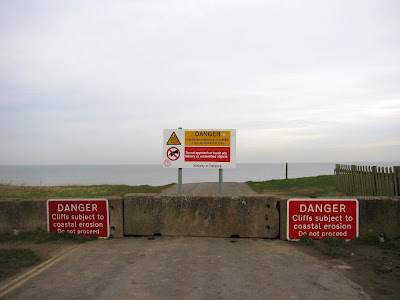 My dad was keen to take me to Aldbrough, a seaside village in the East Riding of Yorkshire, on the North Sea coast. He used to go there with his family when he was a little boy. The name Aldbrough is an Anglo-Scandinavian hybrid meaning 'old stronghold'. The cliffs there are rapidly eroding, so that Seaside Road now terminates at the cliff edge, below. Several buildings have been lost to the sea since 1885. 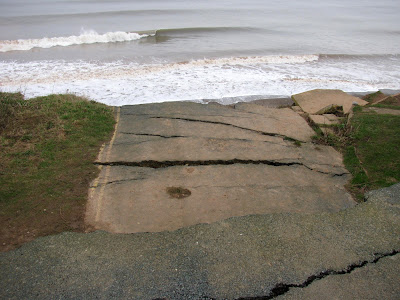 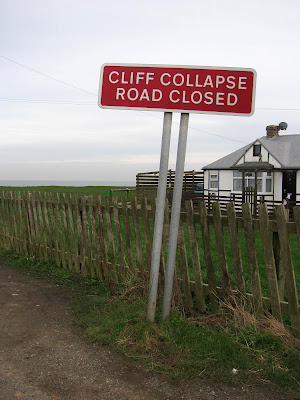 I can't go back to Hull without having fish and chips! We ate at Steels Corner House Restaurant, a traditional fish and chip restaurant dating back to 1946, in the seaside resort of Cleethorpes. Our fresh white haddock, fried to perfection in a crispy batter, was served in the typically English way with slices of bread and butter and washed down with a pot of tea.
Then there were snowdrops to see as well, though we first took a break for Storm Ciara to blow her way through the UK... 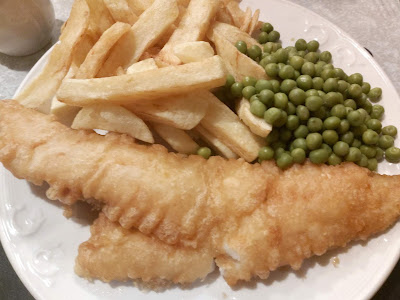 * This post has been shared at The Good. The Random. The Fun., Sharon's Souvenirs, Wordless Wednesday (on Tuesday), Our World Tuesday, Tuesday's Treasures, Travel Tuesday and My Corner of the World.

Posted by Handmade in Israel at 08:52

So glad you got back to visit your dad! What a beautiful place!

Lots of fun places and I enjoyed all the photos. Glad you were able to spend time with your dad before all the craziness in the world. #MMBC

Ahh! We moved to near Scunthorpe last year and everything is still pretty new to us. It's good to learn about where I live. I've seen these places but haven't been. We will eventually. We only visited Hull for the first time a few weeks ago. lol

Agreed, I think we need to focus on our creativity when there is so much craziness going on!

Thank you for sharing this lovely Post. Have a good week.
Stay healthy.

Lovely that you got to see your Dad and get out and about before all this Coronavirus malarkey. Looks like you had lots of adventures - shame about the football! :o) Fascinating about the whale skeleton and those chips had me salivating! xx

What is that gnarled tree in the park just below your paragraph about the sperm whale? It has such character!
This is a great series of images. Thank you for sharing at https://image-in-ing.blogspot.com/2020/03/check-out-wienermobile.html

A Bit of the Blarney said...

I was wondering if the photo of the large tree was a live oak. It resembles those that grow in the South (Louisiana and Mississippi). Just staying in and reading blogs and working on my Easter cards. Wishing you well and Happy St. Paddy's Day to your and yours!

Wow the pics of the nature reserve are beautiful.
Sorry about the loss to Hull but it doesn't seem like it added too much of a dampner on your trip. #MMBC

While I was enjoyably scrolling through the beautiful pictures, I can;t choose a favorite because the buildings and plants look so beautiful. Then that cute Sheep came! I love sheep, I haven't seen so many in my life (just one in Prague during a Christmas Market) This one you took a photo of looks very clever and cute!

So glad you got back to visit your dad. Your photos are beautiful!

Looks like a wonderful trip! So awesome you got to spend time with your dad seeing these interesting spots.

Thanks for linking up with Creative Compulsions!
Michelle
http://mybijoulifeonline.com

I enjoyed your photos. For me it is an unknown country, although it is not far away. So nice, those sheep and the stadium and the picture of you with your father!

...we all need distractions, now more than ever. Thanks for taking on this tour that I wouldn't see for myself for a while. Stay safe and healthy.

What a great visit with your dad! I enjoyed all the pictures very much!

I'm so glad you shared your trip with us! The countryside and critters are great to see :)

Thanks for your contribution to 'My Corner of the World' this week!

My Corner of the World

An Aussie in San Francisco said...

The Far Ings National Nature Reserve sounds great. I love that it was given back to nature after being used by industry for so long. And I can't believe how many species of birds, and flowers, and butterflies call it home now! #WanderfulWednesday

Lovely for you to visit your dad while the airlines were still going. I particularly liked your recount of the tile and brickworks history in Barton-upon-Humber. Even with that much early industrialization, it's good to know that nature has taken it back.

How wonderful that you managed a visit with your dad before the craziness. And such a gorgeous visit at that. I must admit that my first thought when seeing the post was 'oh, no, she's going into isolation', strange strange world. Stay safe, Lisa!!!
Amalia
xo

Thanks for the visit and the comment. Loved your post last Christmas was the first time we have not been in the UK for years but we are only in Wiltshire so it was good to see other places.

What beautiful photos of the English countryside. Safe travels!

Glad you could have a good visit with your dad. Family is so important. - margy

Your first photo is so beautifully framed. A pretty, tranquil scene. I had no idea the largest suspension bridge in the world is in the U.K. Reservations like these are such a treat to visit. The sperm whale remains is definitely a unique thing to see. Wishing you and your family continued health.

Great to read about this part of England and great that you got to visit your dad before the craziness and travels bans.

I'm glad you got to spend some quality time with your dad. I'll get the kettle on next time you are over! ;)
Have a lovely weekend. x

Hull looks like a fab place to visit, and somewhere I've never been despite living in the UK for my whole life! Time to add it to the travels bucket list! Thanks for linking up with #globalblogging

Wow, Burton Constable Hall looks and sounds fantastic! We love visiting stately manors like that, and learning about the history. We'd never heard of this place, so thanks for adding it to our wish list!