More kippot... and a tag 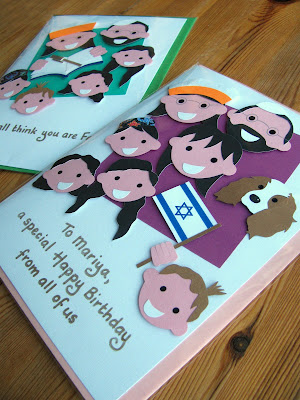 A new client noticed this card on my blog and it really appealed to him. Apparently the boy wearing the colourful Bukharan kippa reminded him of his son. As a result he asked me to make two more similar cards, this time depicting his family. The card on the top left is for his wife, who has an interest in writing and books, and she is depicted surrounded by her husband and four kids. The second card is for his sister, shown in the centre of the card, along with her Cavalier King Charles Spaniel, and again surrounded by her brother and his family. On this card it was requested that I add the flag of Israel with its blue Star of David on a white background, between two horizontal blue stripes.

Yesterday I was tagged by Laurie and I thought it would be a nice opportunity to tell you a little bit more about myself. Happy reading!
The instructions were as follows:
Things you've already done: bold. Things you want to do: italicize. Things you haven't done and don't want to - leave in plain font.

1. started your own blog
2. slept under the stars
3. played in a band
4. visited hawaii
5. watched a meteor shower
6. given more than you can afford to charity
7. been to disneyland/world
8. climbed a mountain
9. held a praying mantis
10. sang a solo
11. bungee jumped
12. visited paris
13. watched a lightning storm at sea
14. taught yourself an art from scratch
15. adopted a child
16. had food poisoning
17. walked to the top of the statue of liberty
18. grown your own vegetables
19. seen the mona lisa in france
20. slept on an overnight train
21. had a pillow fight
22. hitch hiked
23. taken a sick day when you’re not ill
24. built a snow fort
25. held a lamb
26. gone skinny dipping
27. run a marathon
28. ridden a gondola in venice
29. seen a total eclipse
30. watched a sunrise or sunset
31. hit a home run
32. been on a cruise
33. seen niagara falls in person
34. visited the birthplace of your ancestors
35. seen an amish community
36. taught yourself a new language
37. had enough money to be truly satisfied
38. seen the leaning tower of pisa in person
39. gone rock climbing
40. seen michelangelo's david in person
41. sung karaoke
42. seen old faithful geyser erupt
43. bought a stranger a meal in a restaurant
44. visited africa
45. walked on a beach by moonlight
46. been transported in an ambulance
47. had your portrait painted
48. gone deep sea fishing
49. seen the sistene chapel in person
50. been to the top of the eiffel tower in paris
51. gone scuba diving or snorkeling
52. kissed in the rain
53. played in the mud
54. gone to a drive-in theatre
55. been in a movie
56. visited the great wall of china
57. started a business
58. taken a martial arts class
59. visited russia
60. served at a soup kitchen
61. sold girl scout cookies
62. gone whale watching
63. gotten flowers for no reason
64. donated blood
65. gone sky diving
66. visited a nazi concentration camp
67. bounced a cheque
68. flown in a helicopter
69. saved a favorite childhood toy
70. visited the lincoln memorial
71. eaten caviar
72. pieced a quilt
73. stood in times square
74. toured the everglades
75. been fired from a job
76. seen the changing of the guard in london
77. broken a bone
78. been on a speeding motorcycle
79. seen the grand canyon in person
80. published a book
81. visited the vatican
82. bought a brand new car
83. walked in jerusalem
84. had your picture in the newspaper
85. read the entire bible
86. visited the white house
87. killed and prepared an animal for eating
88. had chickenpox
89. saved someone’s life
90. sat on a jury
91. met someone famous
92. joined a book club
93. lost a loved one
94. had a baby
95. seen the alamo in person
96. swum in the great salt lake
97. been involved in a law suit
98. owned a cell phone
99.been stung by a bee
100. Read an entire book in one day
Posted by Handmade in Israel at 09:51 5 comments

She made my day! 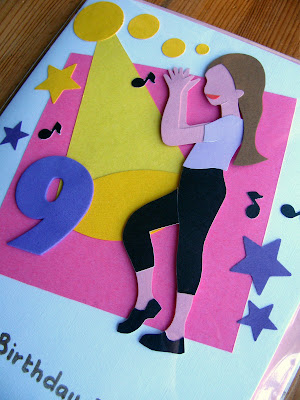 The friend who received my Japanese themed card for her 40th birthday, recently asked me to create a card for her daughter's 9th birthday. The birthday girl is very keen on jazz dancing, and has just been preparing for a show, so it was decided that that was the theme I should go with. Being a Mum to two boys who have no interest whatsoever in dancing of any sort, my first step was to go to Google and find out just exactly what jazz dancing is! I knew that the girl should be shown in leggings and a t-shirt, but that was about all.
Fast forward a few days and the telephone rings as I return home from collecting my boys from school. The birthday girl is on the other end and is calling to thank me for making her such a nice card and to tell me how much she loves it! How lovely! I am thrilled to receive such delightful feedback, especially from a nine year old who has lots of other things on her mind on her birthday. She really made my day! 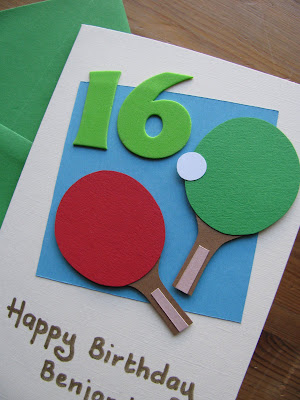 Tomorrow is my nephew's 16th birthday and, although we live far away and don't see him often, I know that he is a bit of a table tennis champion. A simple table tennis card from his Auntie was thought up, and I hope has arrived in time for his big day, along with a present of course!
Happy Birthday!
Posted by Handmade in Israel at 09:22 3 comments

Will you be my Valentine? 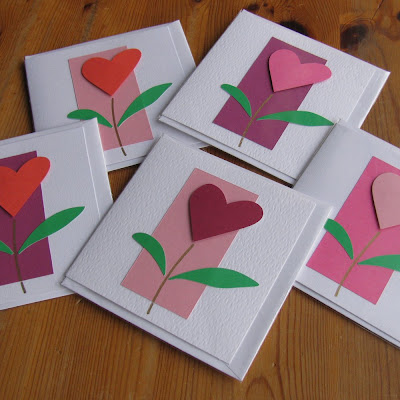 These cards have just gone into my shop, ready for Valentine's Day, celebrated on February 14. You have probably noticed this design before, on my blog's header. I think that it is very suitable for a Valentine card and hope that others will too.
The cards measure 10cm x 10cm folded, and are blank inside for your own message. They come in packs of five. Each card is hand cut and no two cards are exactly the same.
This design is also suitable for birthdays, anniversaries, or just to tell someone that you care. Please drop by to have a look.
Posted by Handmade in Israel at 08:37 4 comments 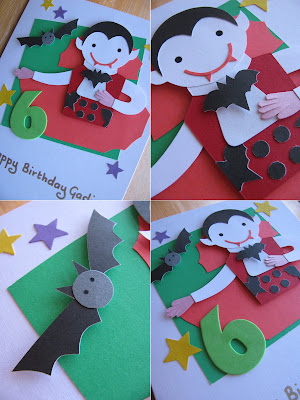 Tomorrow morning will be another one of those early starts for us. There's a birthday to celebrate! My youngest son will be turning six and he has been checking for days, no, weeks, that Mummy has made him a special card. You may remember the football themed card I made for my eldest son back in November. This time I was told exactly what should be on the card. It had to be my son in his Dracula dressing-up costume, with a bat on his shoulder. I hope that I have got it right!
My youngest is into all things scary at the moment, and that was the theme of his party on Friday. We played scary games, he wore his costume, and I made a haunted house cake, and ghost, bat, eyeball and snake cupcakes. Yummy! 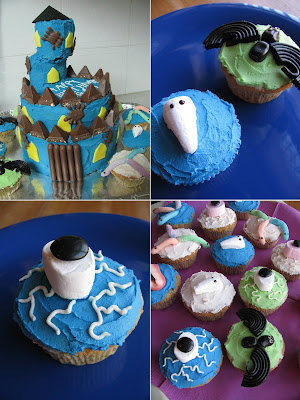 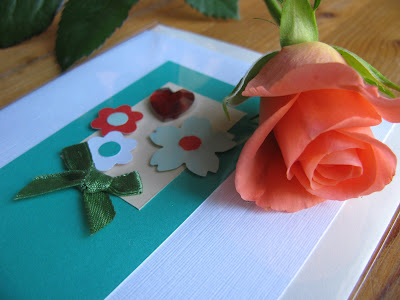 January 12th. An important date in our family diary. My Mum's birthday. If she were still with us. A date I will never, ever forget. Why am I writing about my Mum's birthday here, in a place that is normally reserved for posts about my handmade cards? Well, not only was my Mum one of the most important people in my life, and dearly loved by us all, but she was also my greatest supporter when it came to my little card business and probably the best unpaid card agent in the world!
When I started making my cards and pictures several years ago my Mum immediately picked up on it and decided that she too should be sending 'Handmade in Israel' cards. She ordered cards from me and began to send them to her friends for their birthdays, anniversaries and many other happy occasions. Pretty soon I was receiving phone calls and e-mails asking me to make cards for other people, often with special designs on them. After that a box of cards was delivered to the hairdressers to be sold there, and my Dad was asked to make a custom-made wooden box so that Mum could take her supply of cards wherever she went, to encourage anyone she met to buy her daughters handmade cards.
Mum was a far better salesperson than I will ever be, and she was always encouraging me to come up with more and more designs so that she could offer a larger range to her friends and the shops that she had begun to sell to. Often they would be encouraged to buy three different baby cards, and if they didn't yet know if the baby was a boy or a girl, then they could buy a neutral coloured card instead! This went on for months, years... and then suddenly Mum was not with us anymore and the best Mum, Granny and card salesperson in the world was gone.
Mum, we love you and think of you every moment of the day. I am sure you are probably busy selling something up there in heaven, and making someone else's business all the more successful.
Posted by Handmade in Israel at 10:24 8 comments 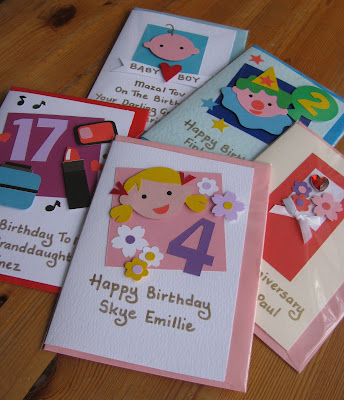 Whilst the news here in Israel is far from good, away from the war zone we are trying to maintain as normal a lifestyle as possible, and for me that of course means some crafting and card making.
The cards above were requested by one person who needed cards for various members of her family, both young and old. The clown card in the top right corner is for her two year old great-nephew, whilst I also made a card (not pictured) for her 98 year old aunt, with the makeup card for a 17 year old teenager in between! That's quite an age range, but I hope that my various card designs can accommodate the tastes of different generations.
Below, you can see a custom-made card for Safta, or Grandmother in Hebrew, created in a similar vein to a previous request for her husband, Saba. It seems that Safta is a knitter and I was asked to show her doing just that, and also to illustrate her (many) grandchildren here in Israel.
I do hope that all the recipients of these cards, both young and old, will enjoy them. 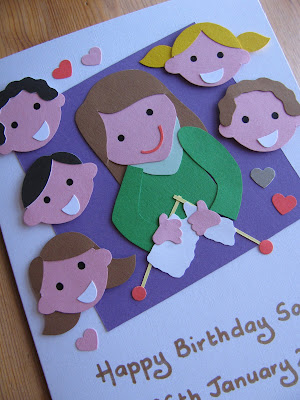 Posted by Handmade in Israel at 14:50 2 comments 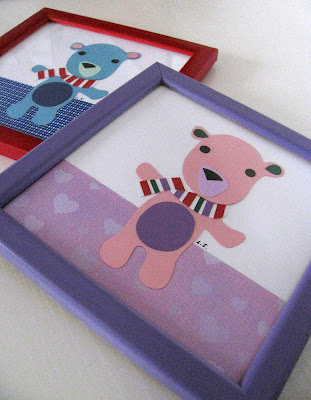 Well, it hasn't been a great start to the New Year for my little country, but the kids are back at school after their Chanukah break and I am back at my desk, so for the time being life has gone back to normal for us. I made these little papercut pictures in preparation for some of the fairs I took part in before Chanukah, but didn't have the opportunity to show you them until now. Some of you may remember seeing the little penguins pictured in their unfinished state on my cutting mat in this post. These illustrations are 15x15cm and are crafted completely in cut paper. I had great fun deciding the colours for the scarves that the little bears are wearing!
Some pictures are now up for sale in my Etsy shop so please pop over and have a look. 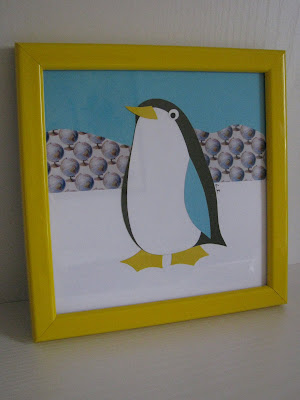 Posted by Handmade in Israel at 09:20 9 comments