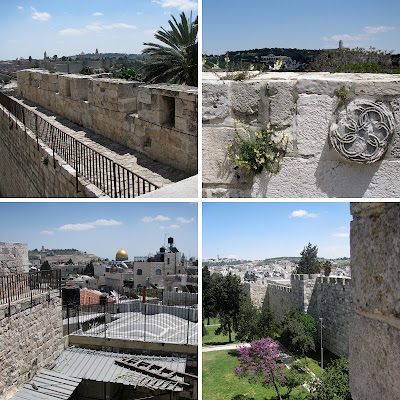 The Passover holiday was a long one and we were literally climbing the walls. They were pretty good walls to climb though, and it made for a fascinating morning! We did the Ramparts Walk along the walls of Jerusalem's Old City you see and our wall climbing proved to be exciting, fun and full of breathtaking views of Jerusalem. 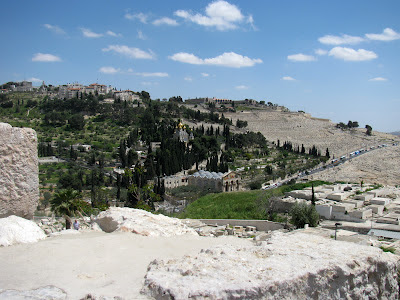 The Ramparts Walk was closed for several years for security reasons, but they are open once again and are an amazing way to see Jerusalem. An estimated 3.5 million tourists visit Jerusalem annually and most visit the inside of the Old City. Our stroll on top of the ramparts gave us a totally different perspective. Not only do you get a spectacular view of the city beyond the walls, you also get a unique look, especially in the Muslim Quarter, at how people live inside the maze-like city. 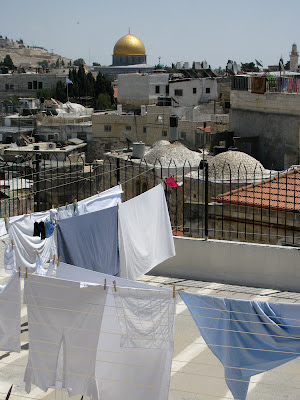 Our walk took us along the northern section of the walls, around past the New Gate to the Damascus Gate and then all the way to the Lion's Gate and the start of the Via Dolorosa, past the Christian and Muslim quarters. For security reasons, the Ramparts Walk does not cross directly over the Temple Mount but finishes close by. Without rushing, were up there for a little over two hours. The steps are uneven and many are quite high, so there is some effort involved, however it all felt completely safe. We saw minarets, the Dome of the Rock and the bustle of the Arab market, but also saw into the back streets and sometimes the back yards of regular folk living in the old city. I love this photo of the Dome of the Rock, with some laundry hanging out to dry in the morning sunshine nearby (above), and who knew that there are not one but two synthetic football pitches in the Muslim Quarter of the Old City (below)? 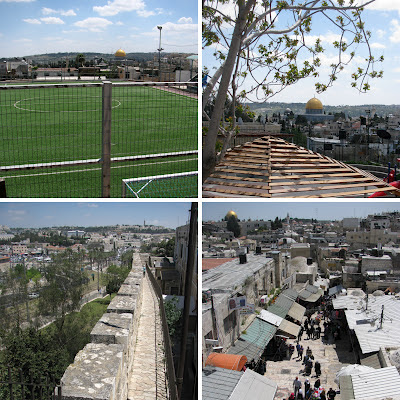 Making our way toward the Temple Mount from Damascus Gate, we saw the Rockefeller Museum, which houses antiquities found from archaeological excavations and other exhibits.We got a wonderful view of Mount Scopus, the Hebrew University, the ancient graveyard on the Mount of Olives and various churches. Turning to look inside the city, we got to see iconic structures that have been written about for thousands of years.
All in all it was a fantastic way to spend a morning. As a family we have visited Jerusalem's Old City many, many times. On this occasion we enjoyed it from a totally different perspective. The Ramparts Walk seems to be one of the best kept secrets in all of Jerusalem. For some reason tourists and locals alike do not often make it onto the ramparts. After having done the walk, I have to say that it's a great shame for those who have missed out on it.
Posted by Handmade in Israel at 11:00

Wow, it looks like a fun adventure with amazing views. Great photos, thanks for sharing.
Valerie
Everyday Inspired

Great post, my kids would love this - we thought to do it a few weeks ago but it was closed. I should try again before it gets too hot...

Thank you for the tour! If I ever visit Jerusalem, I will add Ramparts Walk to the list of things to do. The history must be amazing.

What an incredible way to spend a few hours. If I ever get over to your part of the world I will be sure to put this destination on my To Do list.

We did that walk when we were in Jerusalem too. It really was a lovely perspective of the city.