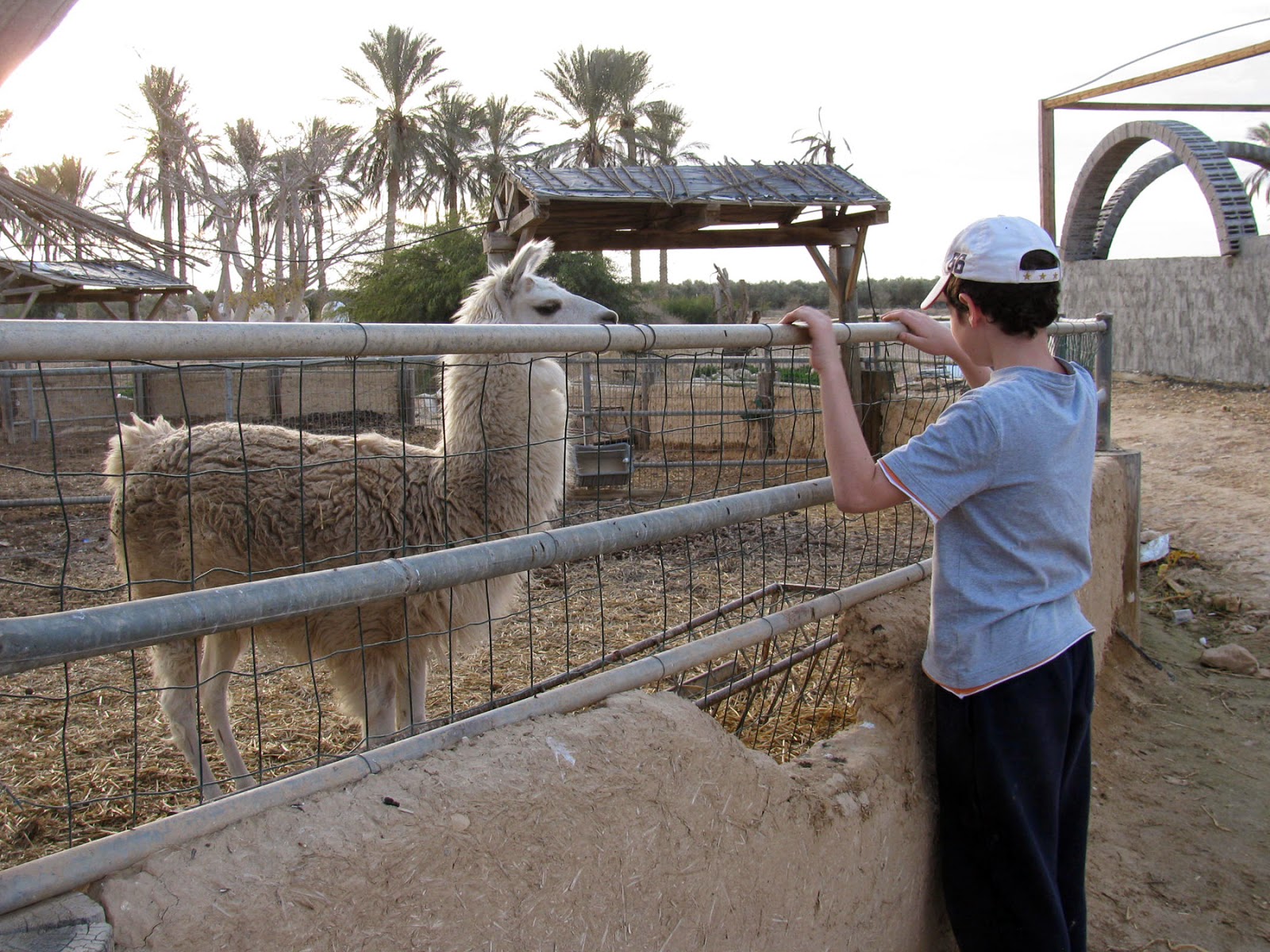 Chai Negev is an ecological village at Kibbutz Revivim, a kibbutz in the Southern District of Israel with a population of 800, of which nearly 370 are members. The kibbutz was established as an agricultural research station in 1943, on the site of a Turkish railway station and British army camp. Recording rainfall, and experimenting in various ways, the members of the kibbutz managed to find enough water to grow produce in the sand, and succeeded in transforming the research station into a kibbutz, a communal settlement, in 1948. Revivim played a huge part in the massive success Israel has had in making the desert bloom, and today it thrives on a large olive crop, irrigated with locally available brackish water, as well as a dairy, a chicken hatchery and a fish growing farm, and other non-agricultural industries. One of Kibbutz Revivim’s founding members was Golda Meir’s daughter, Sara, so Golda Meir, the fourth Prime Minister of Israel, spent a lot of time there, Revivim becoming her second home.
We were looking for inexpensive accommodation for a weekend away, and Chai Negev at Revivim, which opened in 2003, suited us perfectly. The site offers ecologically constructed accommodation, ranging from group tents and mud brick houses, to the more conventional guesthouses (our choice!), and it was all surrounded by a zoo! 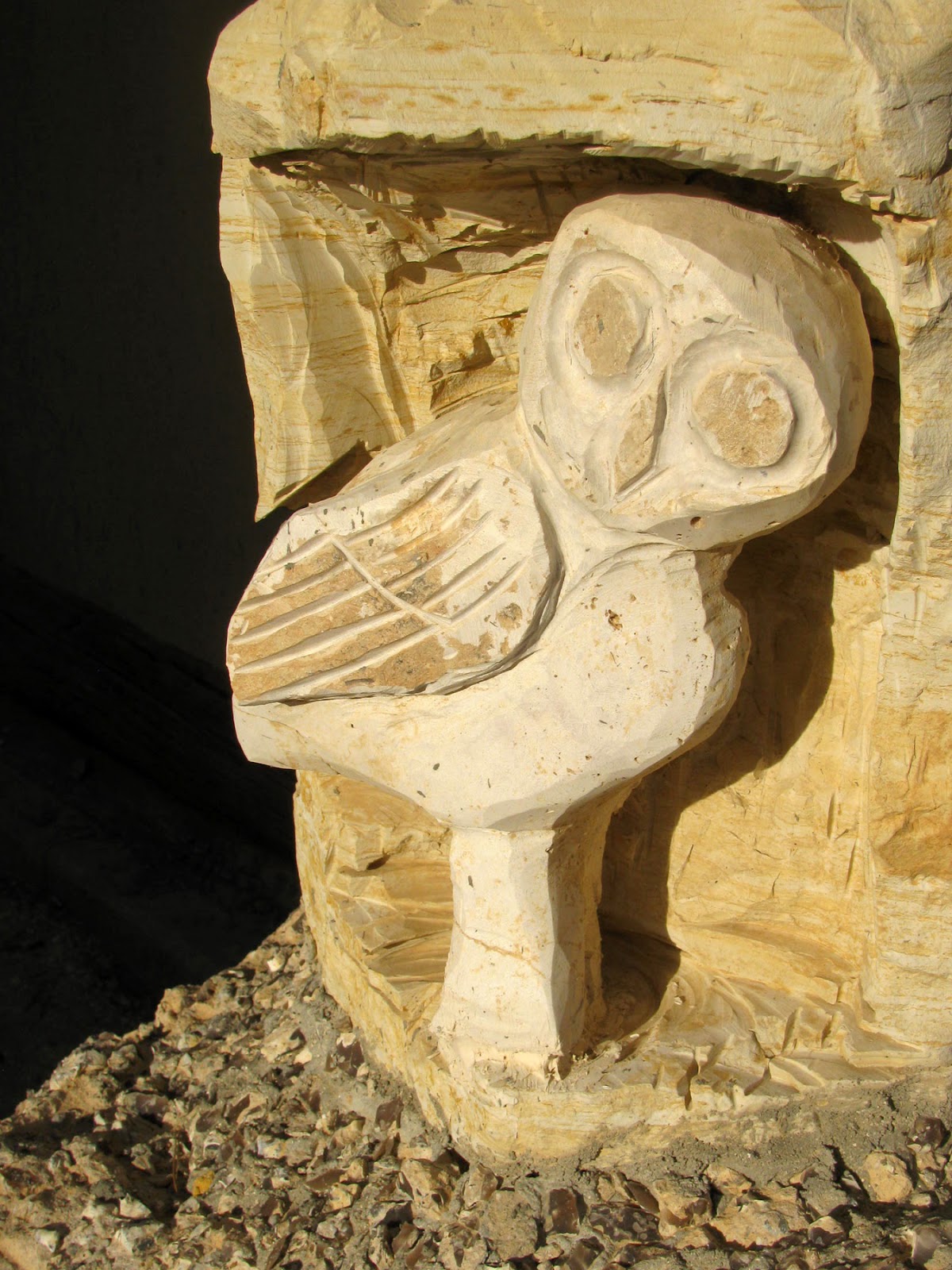 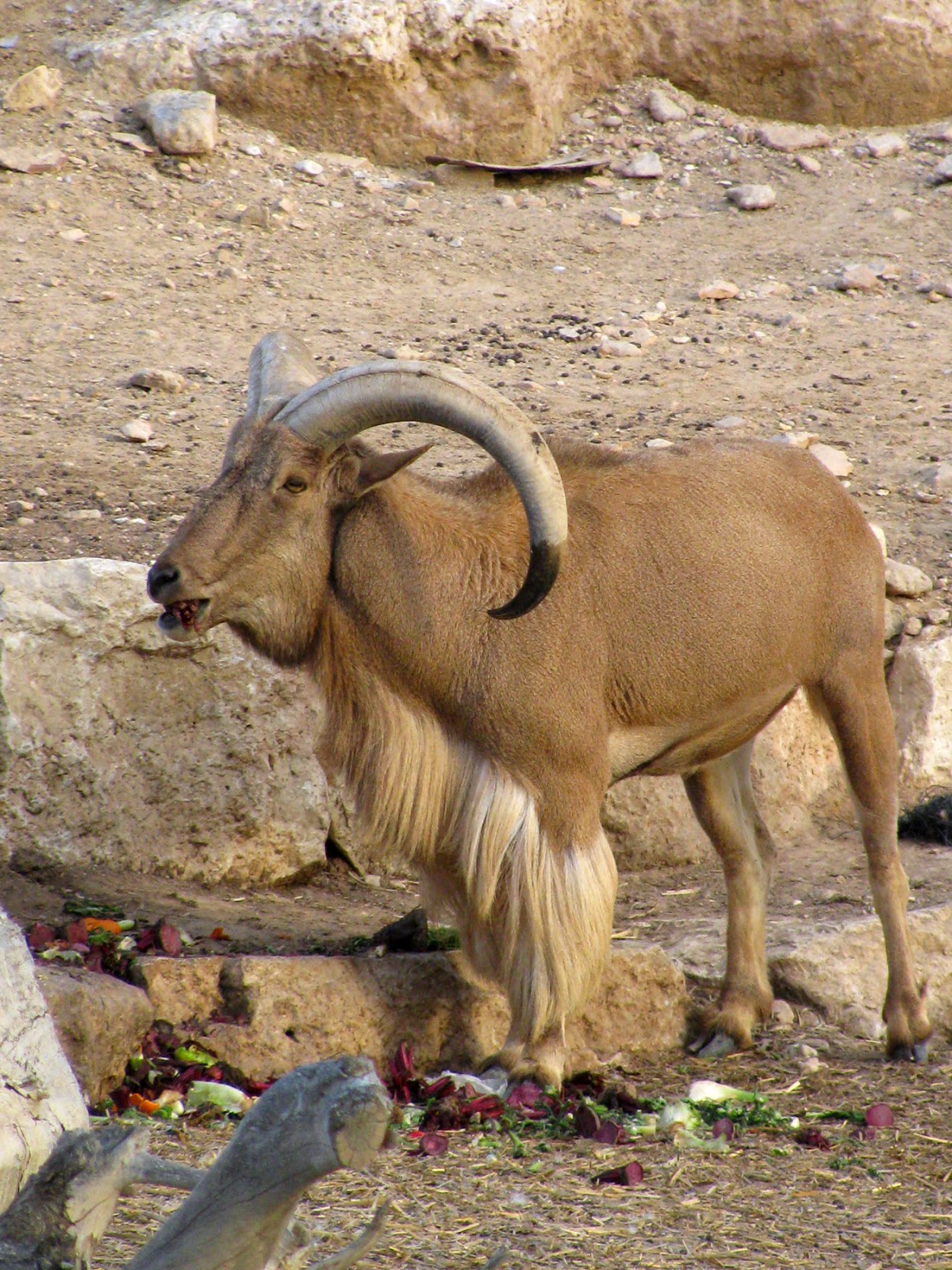 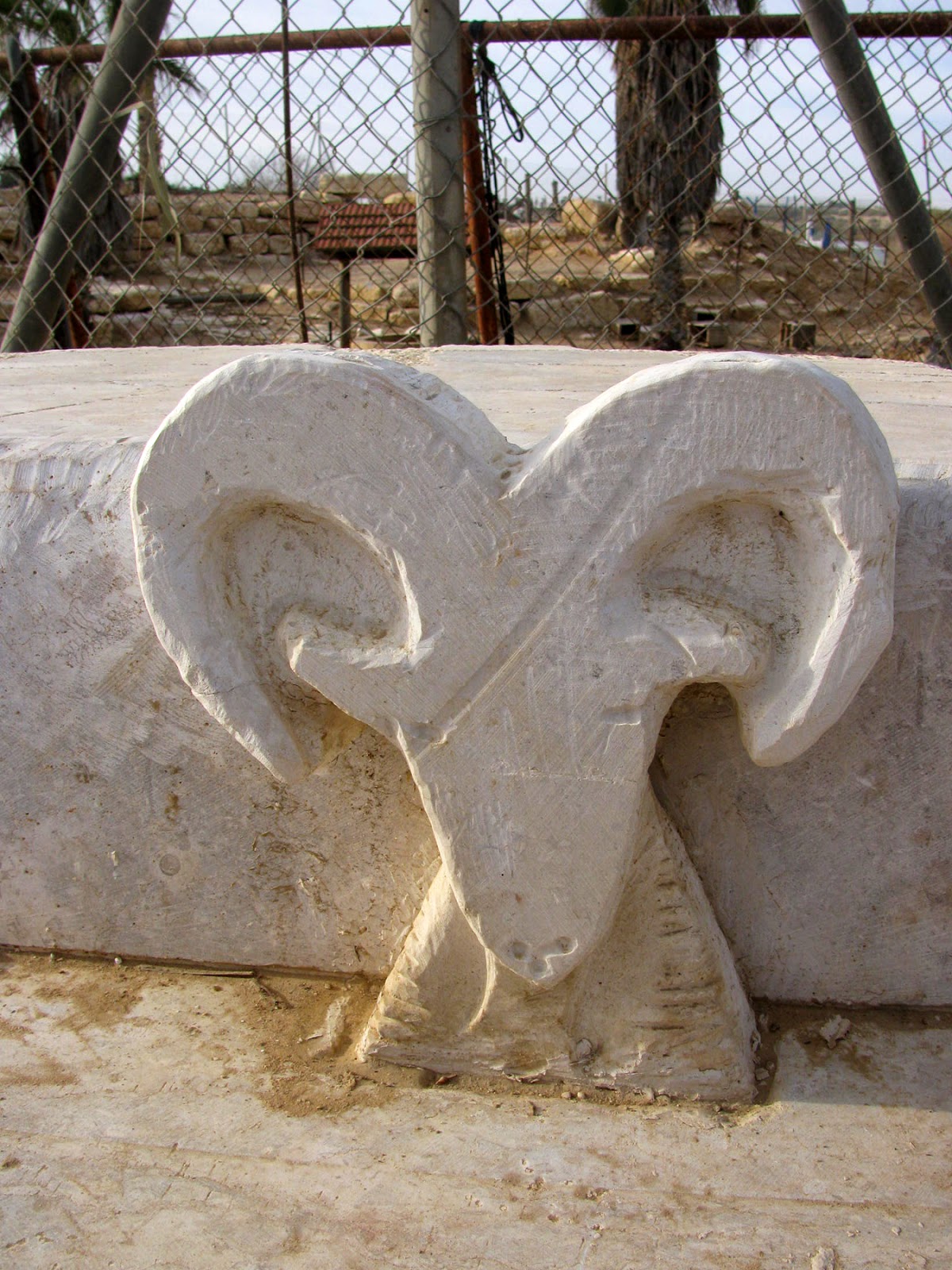 At Chai Negev the goal is to bring children closer to the natural world around them in a way that is direct and enjoyable, in order to raise their awareness of their environment and heighten their sensitivity to what goes on in it. The site is home to a variety of desert animals raised in special breeding centres, in conditions resembling their natural habitat. Though I can't say that I particularly enjoy seeing animals in cages, coyotes, foxes and baboons were situated right next to our room and they seemed active and happy. My youngest son woke early in the morning and I saw him creep out to go and see the monkeys and say good morning the hens! A waterfowl lake, alpaca, sheep and more were also nearby. 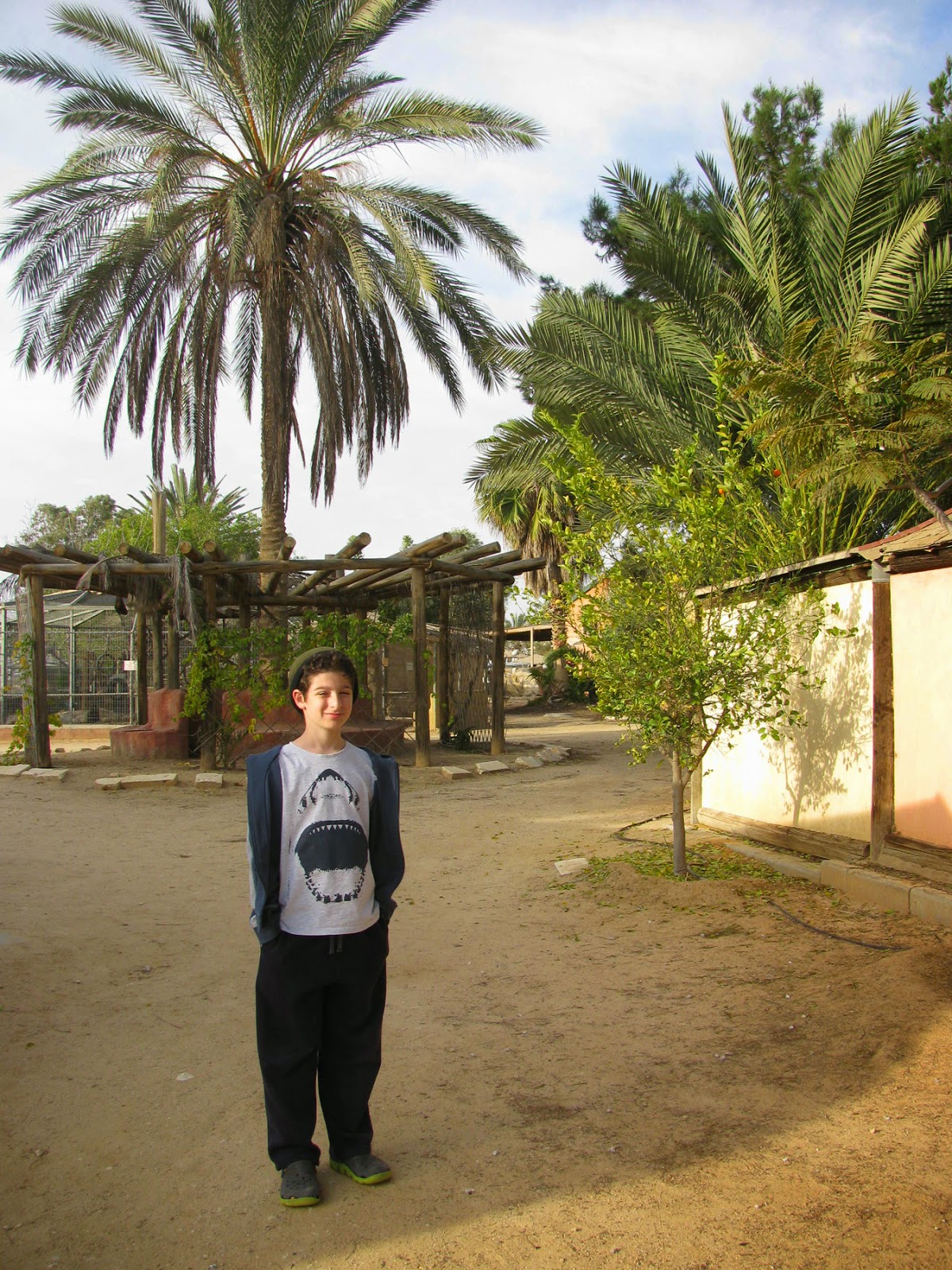 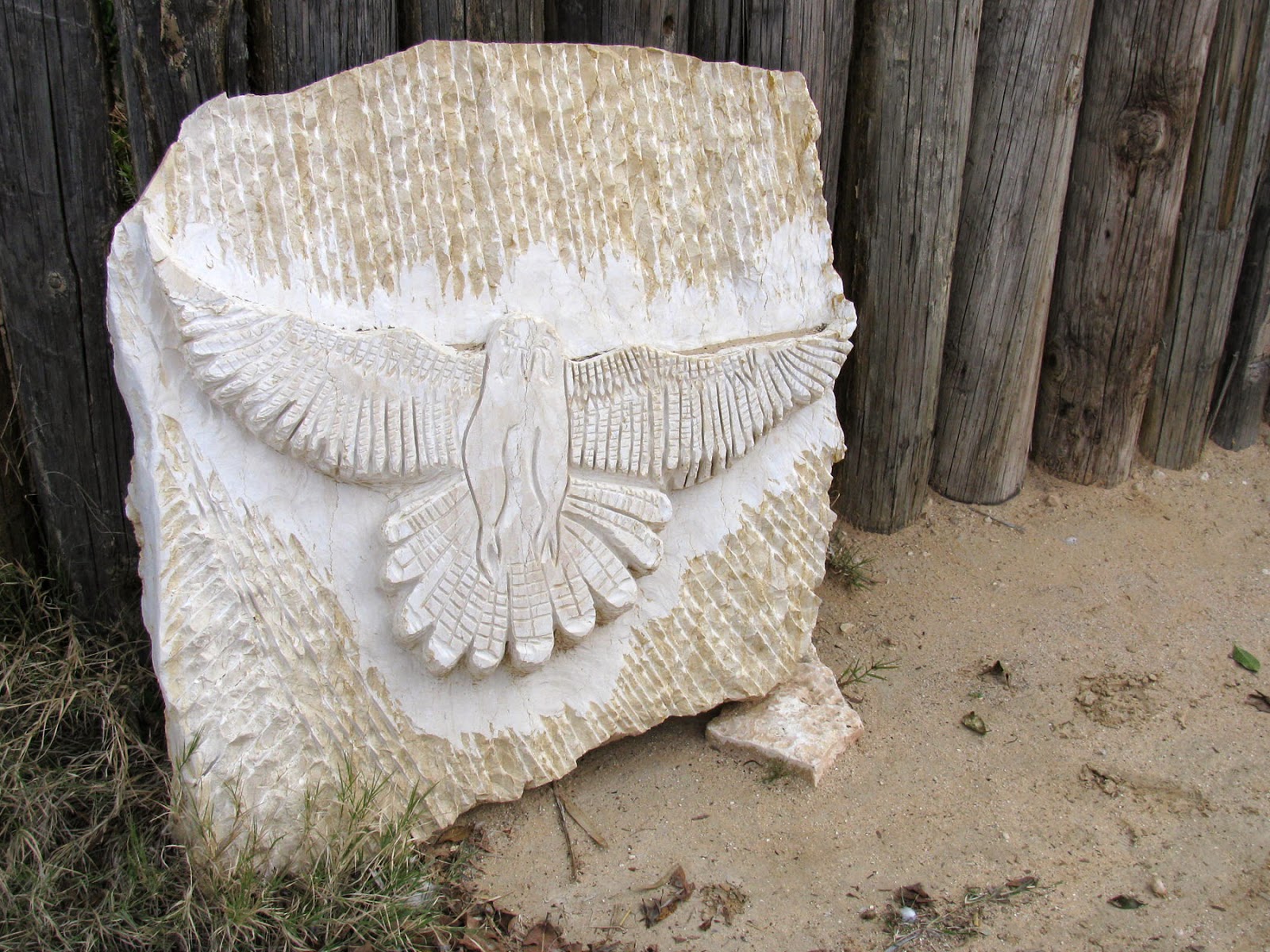 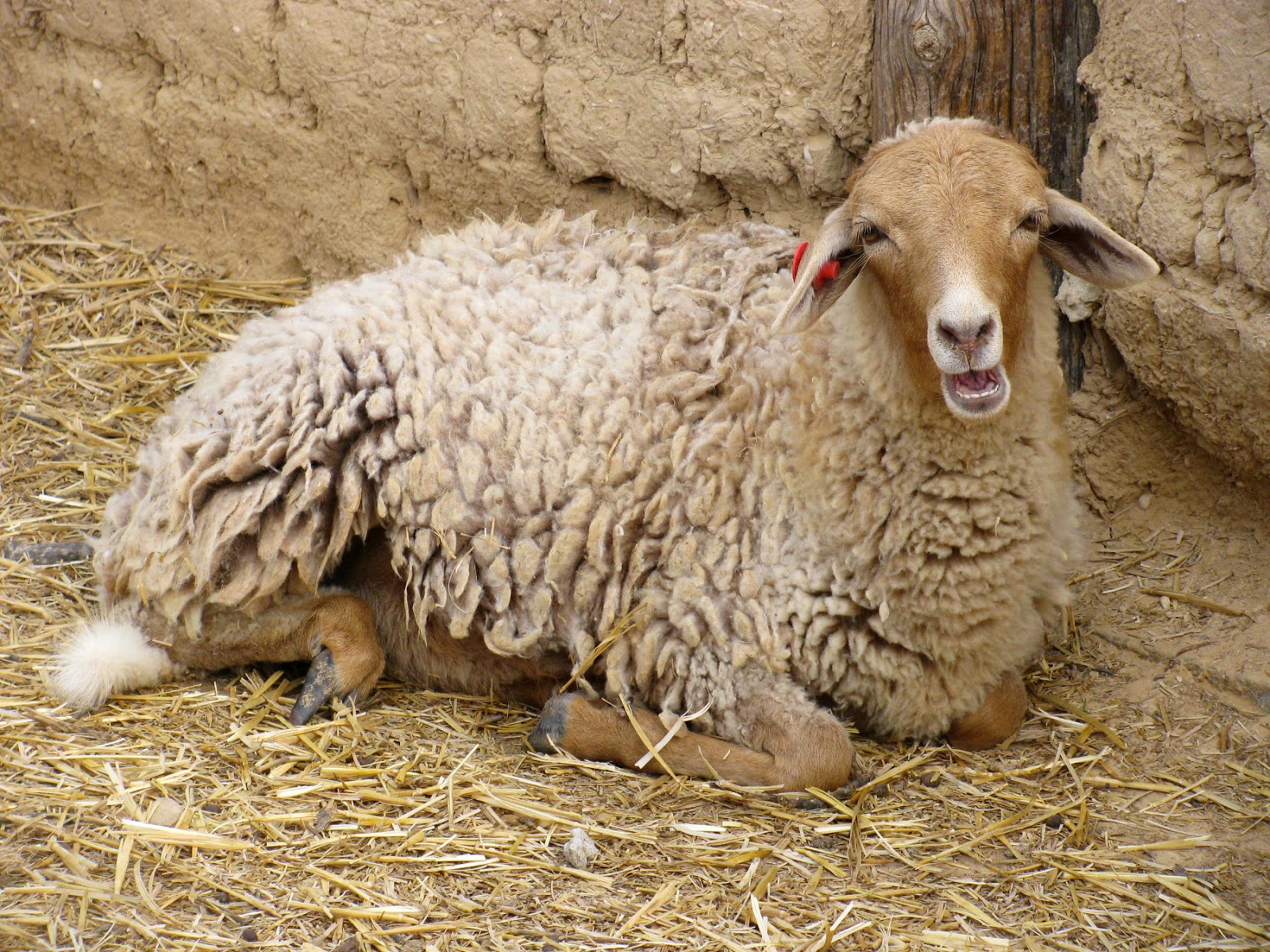 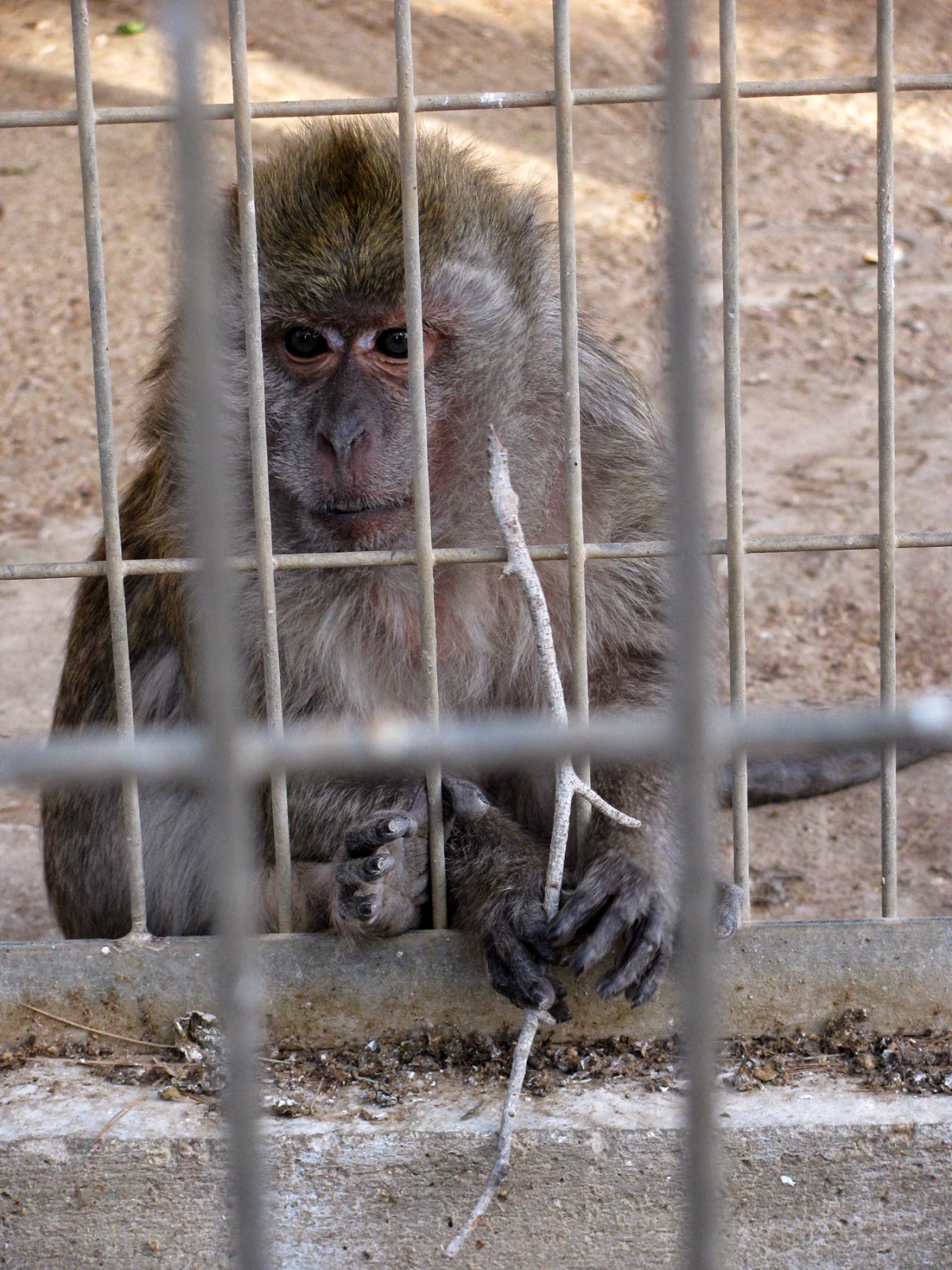 What makes Chai Negev so unique is its buildings, which have been built with an ecological approach and with the most imaginative and creative use of local materials. Compressed hay bales, recycled tires and wood have all been used in the structures, whilst a nearby lookout tower, built from logs, enabled us to see the entire compound, with its view of the beautiful Negev desert and also the kibbutz scrapyard! Breakfast was Bedouin-style pita bread, rolled by the kids and baked in an outdoor oven while we waited, accompanied by olives, sliced raw vegetables, labneh with olive oil and za'atar (hyssop), and a hot drink. Delicious! 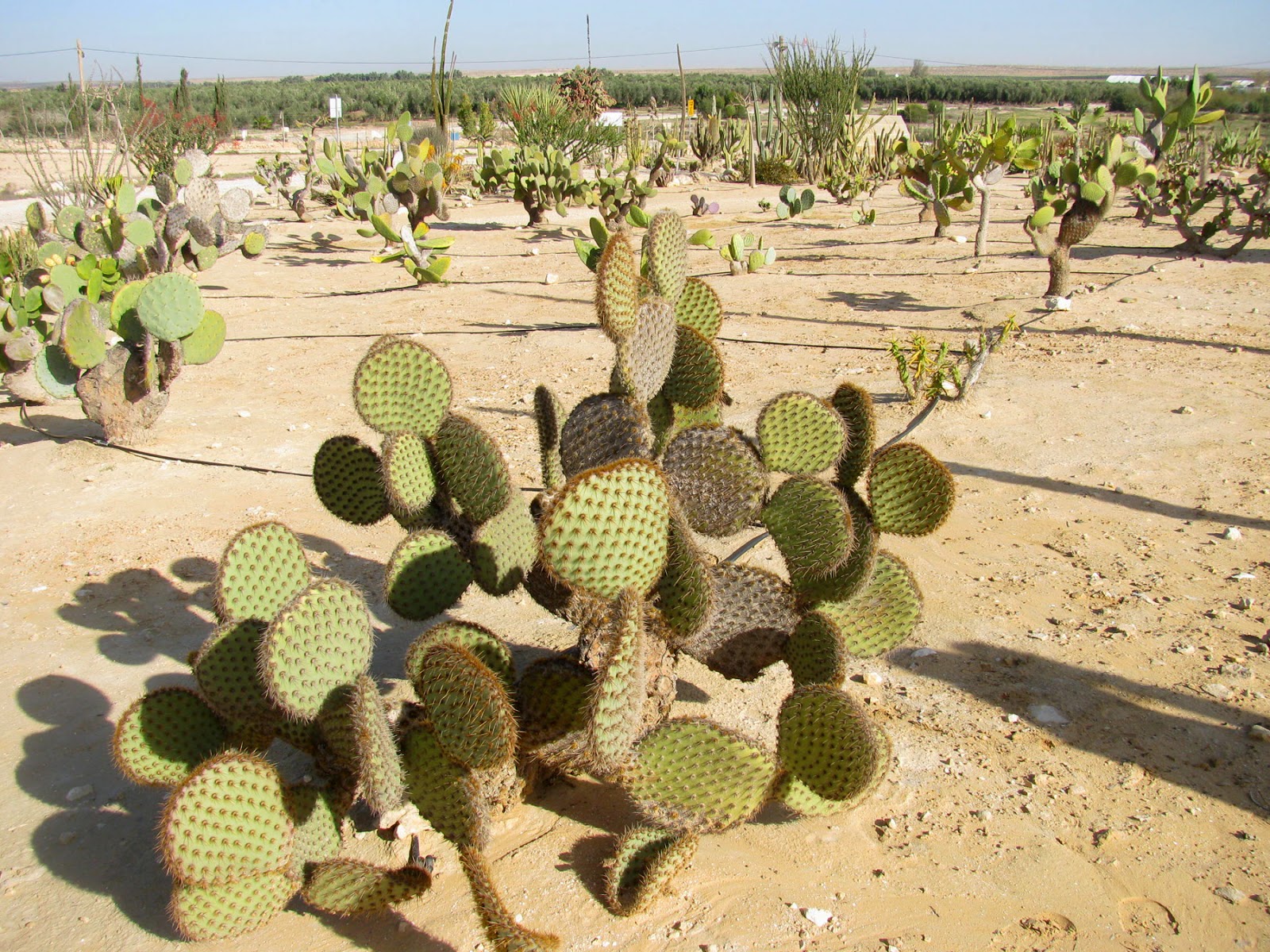 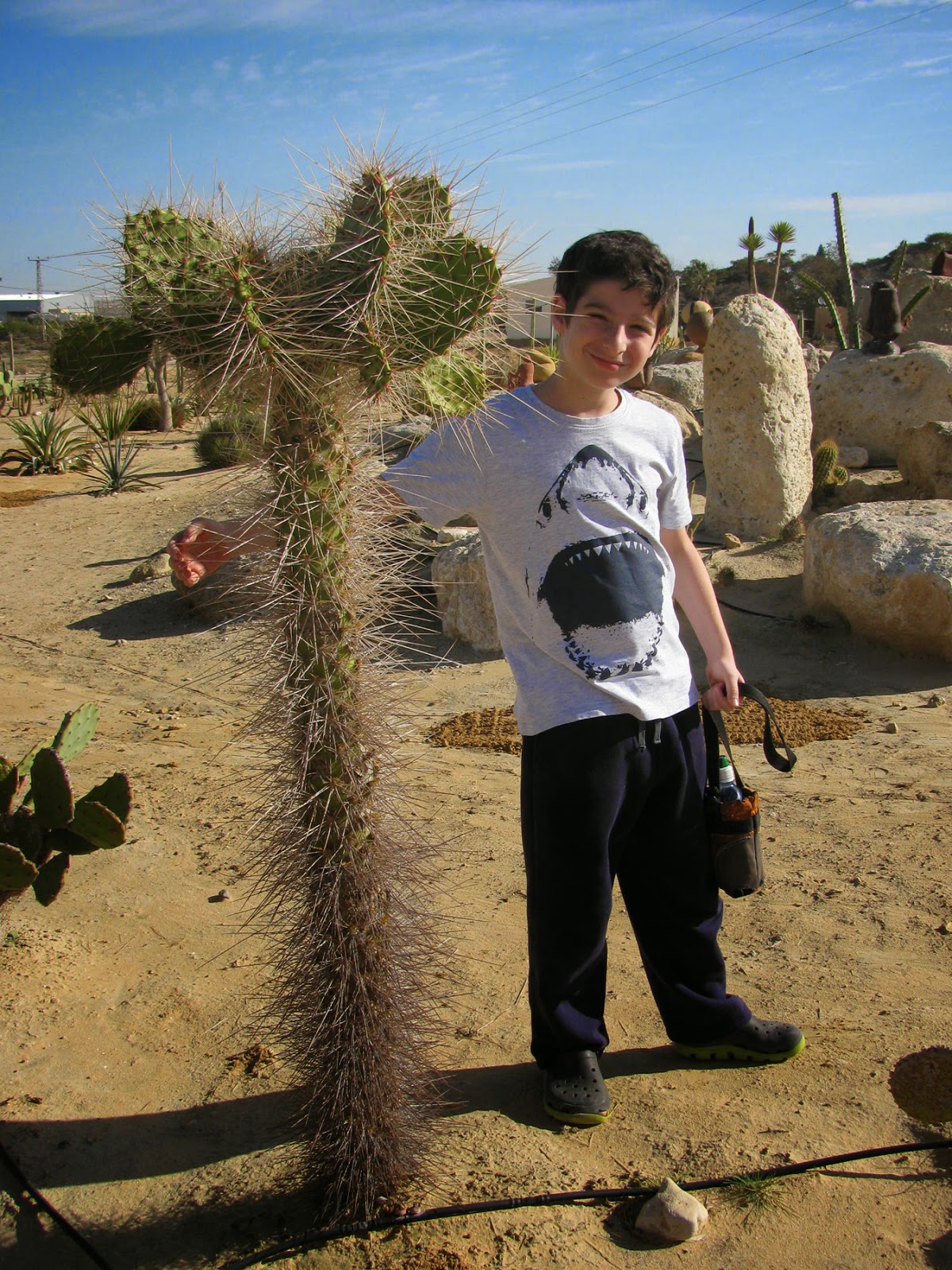 The cactus garden at Revivim was established in the 1990's on an area of land next to Chai Bar, at the side of the kibbutz. Most of the plants there were brought from different nurseries, while some were developed from seeds. The boys and I had a good time exploring the garden, looking at all the different cacti and succulent plants. 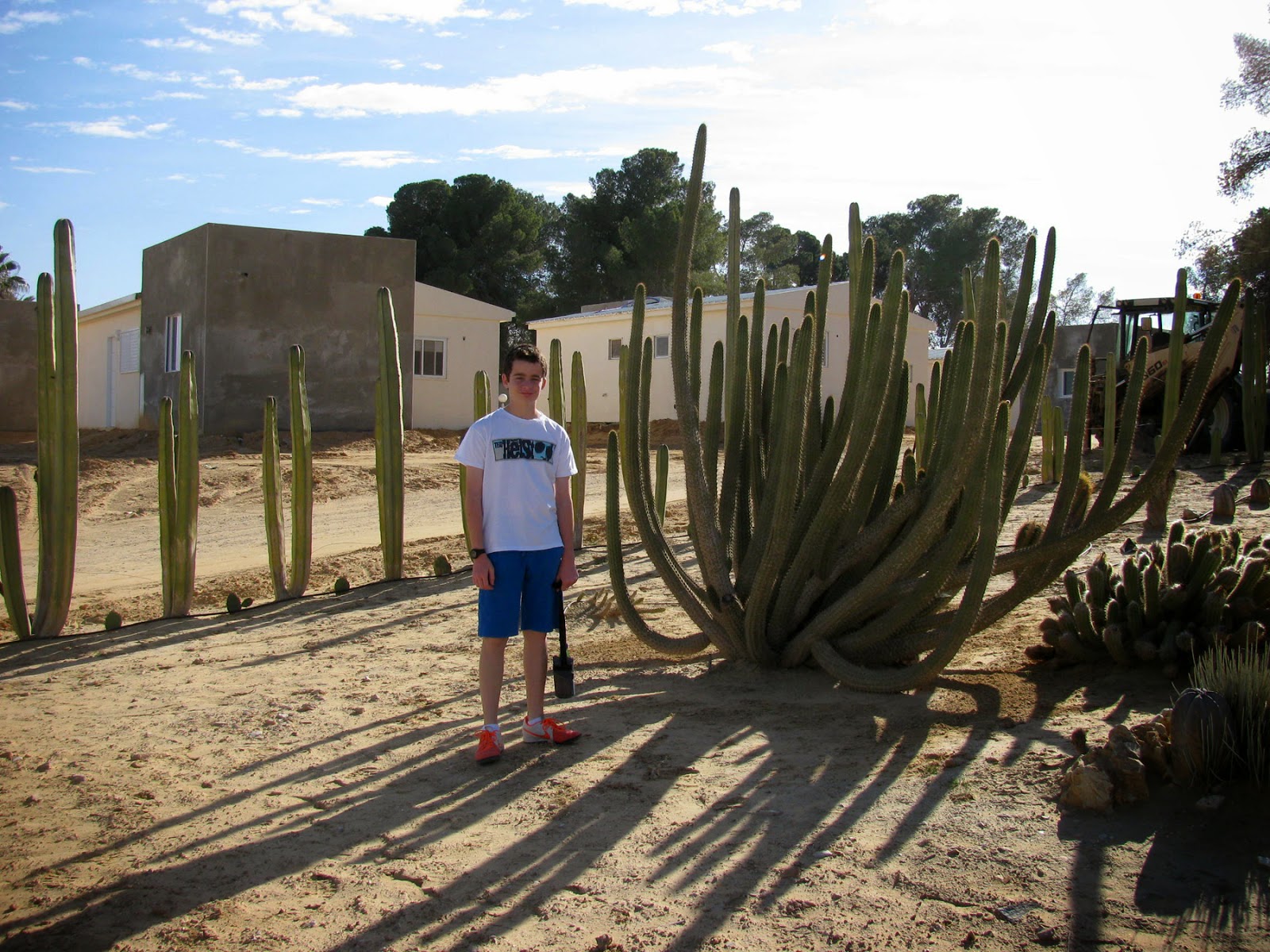 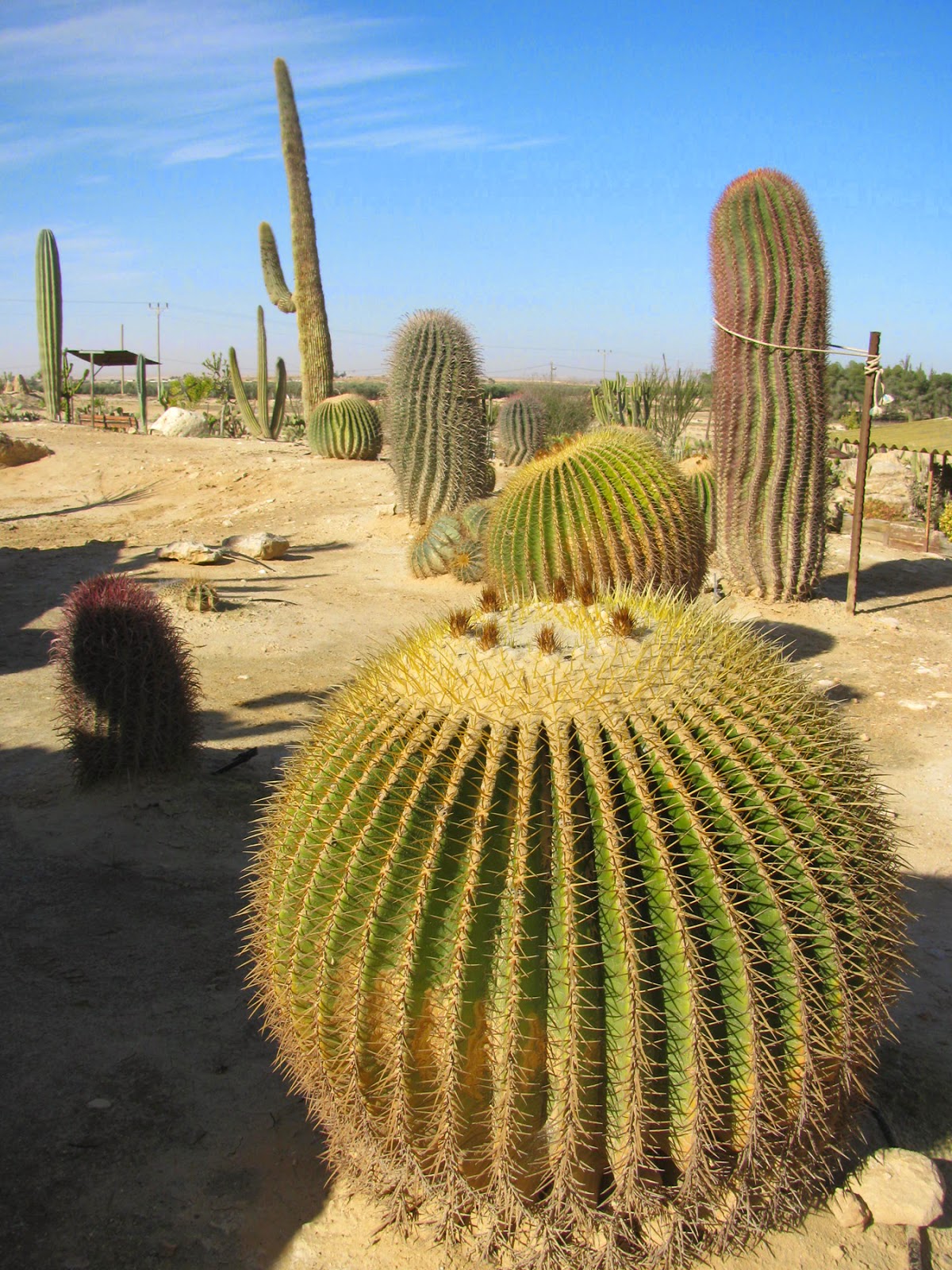 It certainly didn't have a five star rating, but Chai Negev was most definitely a quirky and unusual place to stay! It had a certain appeal to it, and frankly my youngest son, who loves animals and being outdoors, thought that he was in Gan Eden (the Garden of Eden). I simply enjoyed being in a fun place. It always amazes me how close we live to the desert. It was wonderful to take advantage of it. 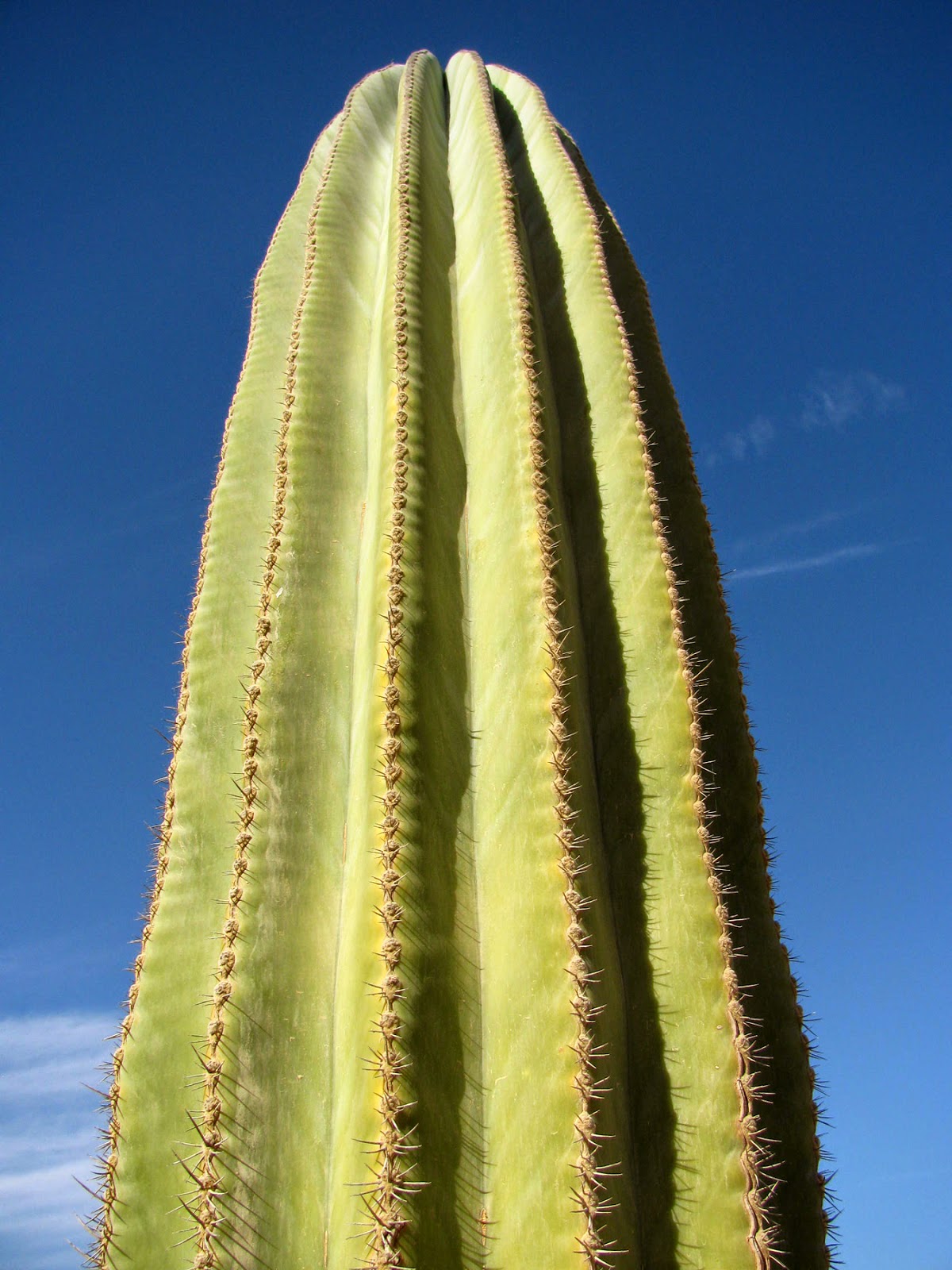 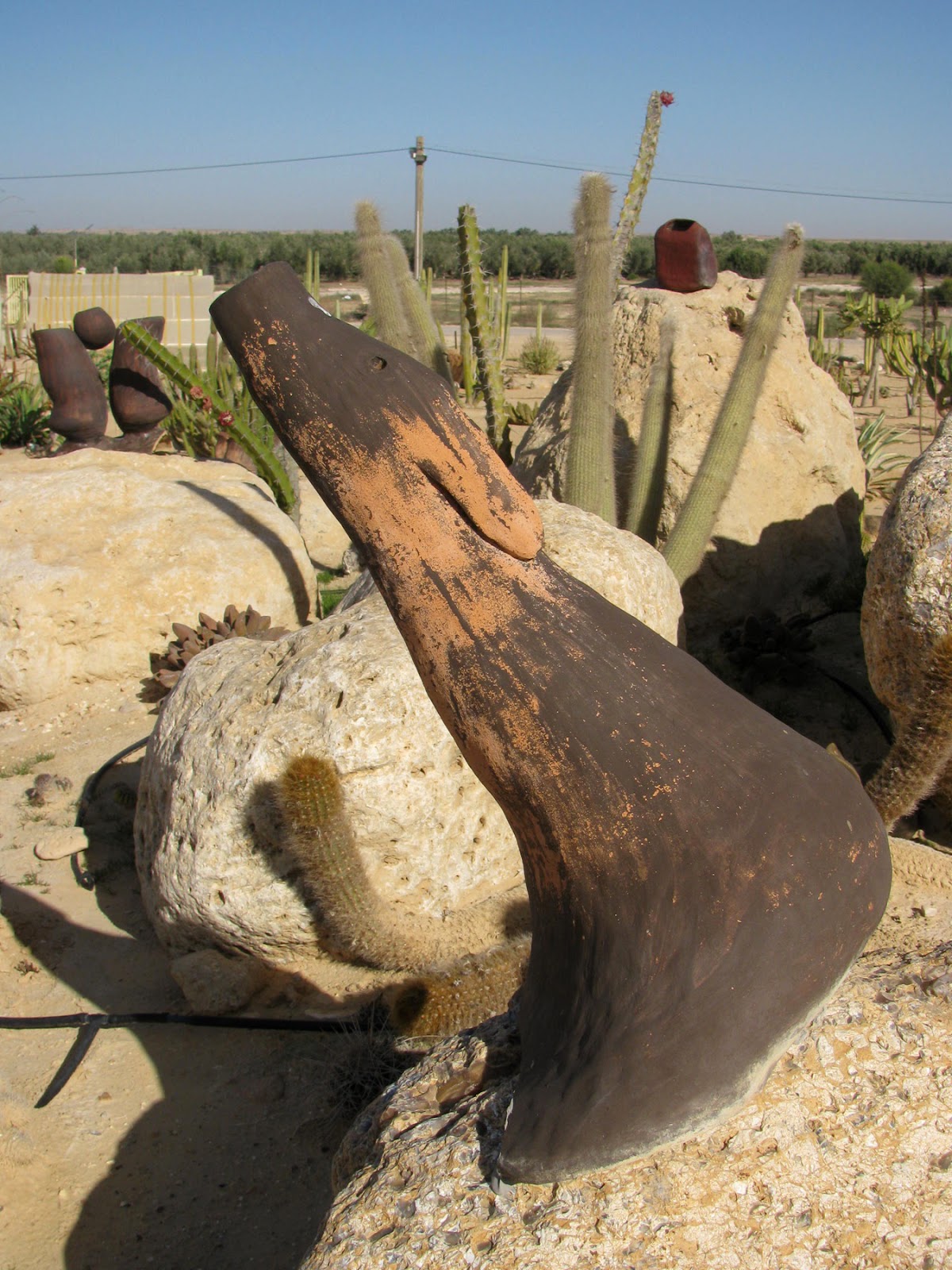 Posted by Handmade in Israel at 08:48

Highly recommend if your kids like animals. Also has an en suite full size football pitch (for the more discerning).

really neat cacti and carvings! i, too, don't like caged animals, but hopefully they are well cared for and get exercise, too.

I can see why you enjoyed your weekend away - it looks like a fun place to visit.

What a neat place to visit. I have issues with animals in captivity too. I always hope they are well cared for and help children grow to love and respect them. The cacti are awesome!