A Teacher and Two Soldiers 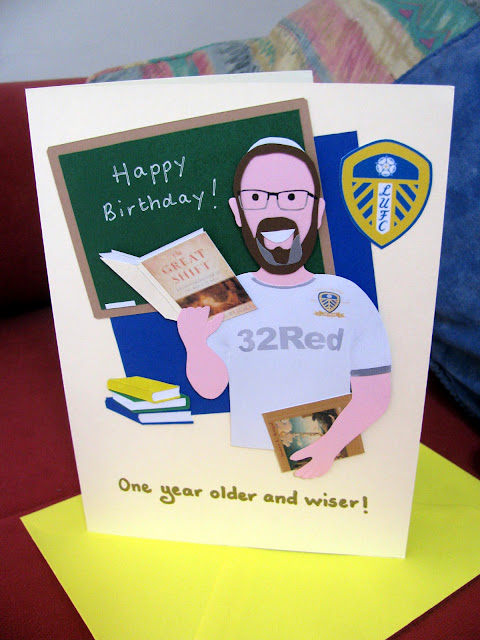 A new customer contacted me with a request for a birthday card for her husband. He is a teacher and a Leeds United supporter, she told me, and he reads kodesh books (religious texts) all the time.
I asked my customer about her husband's favourite author and she mentioned a scholar called Professor James Kugel. I have shown her husband with one of Kugel's books in his hand and another tucked under his arm. He is wearing a Leeds United shirt and his beloved football team's badge is behind him. Finally I included a blackboard and a small pile of books to represent his profession. "Happy Birthday" has been chalked on the board.
My customer's initial reaction to the card was "It's wicked!" She later wrote that "My husband totally loved your card! He couldn't get over it!" 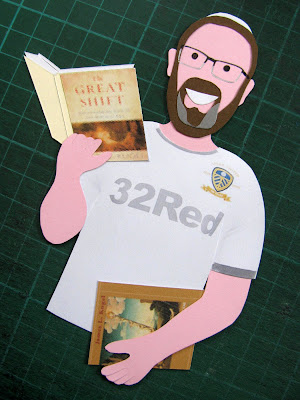 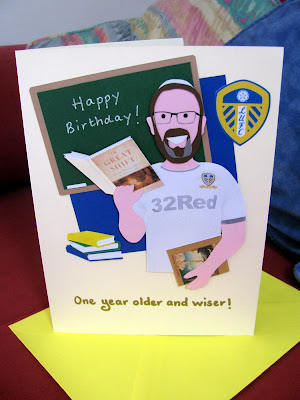 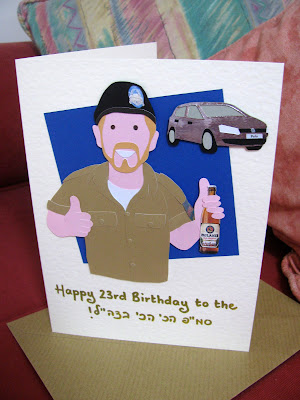 I heard from the same customer again shortly afterwards. "Could I put in another order for a card?" she asked me. This time she wanted a birthday card for her son who was turning 23. He is a Deputy Company Commander in the Israeli Armoured Corps (חטיבה 7) and the army is his whole life, she wrote.
I have shown the birthday boy in his olive green uniform. The pin representing the symbol of his corps can be seen on his black beret. He has a little silver Volkswagen Polo that he's very fond of, so I included that in the background as well. He is holding a bottle of his favourite beer.
The Hebrew greeting on the cards says "Happy 23rd birthday to the best Deputy Company Commander in Tzahal!" (The Israel Defence Forces are commonly known in Israel by the Hebrew acronym Tzahal צה״ל)
"We love it!" my customer wrote to me. 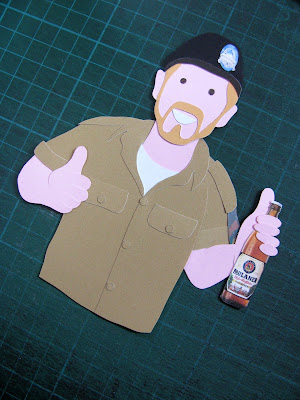 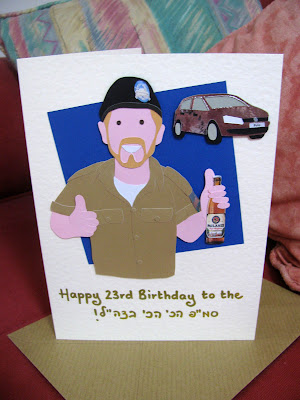 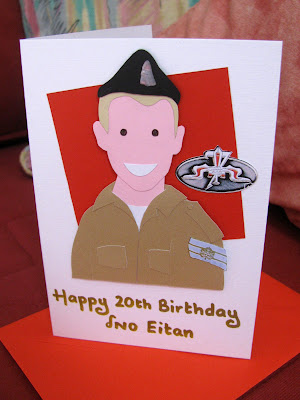 Eitan has received many cards of mine over the years. This is one of my favourites. Like many soldiers during the time of the coronavirus pandemic, he was stuck in the army over his birthday and for quite some time afterwards. Mum wanted a card anyway so that she could send it to him by whatsapp!
She requested a headshot of her soldier son wearing his black beret and showing his sergeant's stripes on his sleeve. She also asked me to add his unit's insignia on the card.
The Hebrew greeting says "Happy 20th Birthday Sergeant Eitan".
"He really liked his birthday card" mum later told me. As planned, she sent a photograph of it to Eitan on whatsapp and then it was waiting for him to open when he eventually got home. 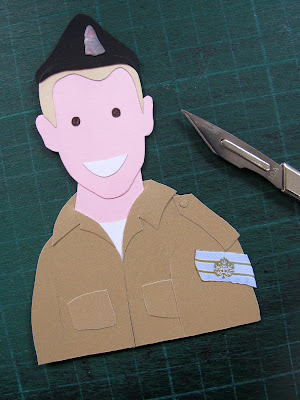 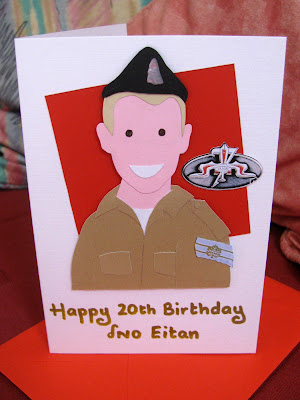 * This post has been shared on Inspire Me Monday, Busy Monday, The Good. The Random. The Fun. and The Happy Now Link-Up.

Posted by Handmade in Israel at 08:18

Beautiful cards. You go to such effort to accommodate the recipient's interests. xx

I love the way you always include the personal details making each card a unique gift for the recipient. Have a great week!

These are so lovely, as always!

These came out great Lisa!

Wow, these are really great. I wish I could draw!

What gorgeous cards. You really do get so much detail about the person you are making it for and that is wonderful. x

Hi Lisa..I had fun looking at these two cards and then scrolling around some of your other card posts I’ve missed ...especially loved the 80th BD cards... your dads card was perfect and I really smiled at the vacuum loving red headed 80 yo lady. I wish I lived near her, she would be welcome to indulge her hobby on my floors ))!

These are really beautiful cards Lisa! You really have your own distinct style in paper cutting that I personally like and appreciate so well :) Greetings of a Happy Birthday to the Teacher and the 2 cool soldiers!

I love the details of these - especially the cover in the book
Thank you for joining The Really Crafty Link Party this week!

Such beautiful creations! I can see why they brighten someone's day. Your cards are super special. x