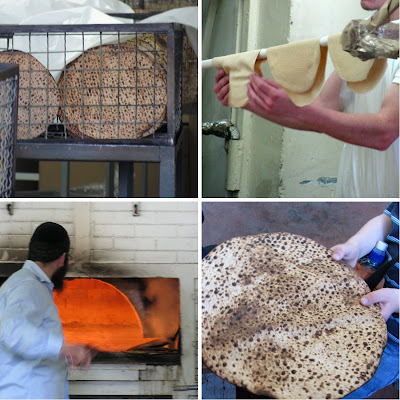 Chag HaMatzot, the "Festival of Unleavened Bread" in English, or simply Passover, will soon be upon us. I was organised this year and since the end of the last Jewish festival, Purim, I have slowly been preparing for the festival which probably requires more preparation than all the other festivals in the Jewish calendar put together!
I have cleaned my kitchen and removed all traces of chametz (the Hebrew term for "leavened bread"). I have changed all the utensils and pots and pans for ones that we only use during Passover. I have washed the curtains, polished the silver, cleaned the kids rooms, washed the floors... the list goes on. Of course many of these jobs are actually really just spring cleaning. Preparations for Passover require us to rid our homes of leavened bread - to remind us that the Jews leaving Egypt were in a hurry and did not have time to let their bread rise - yet there certainly has not been any bread anywhere near my curtains! However, it is now all done and I can relax and enjoy the seven day holiday and all the activity that comes with it. 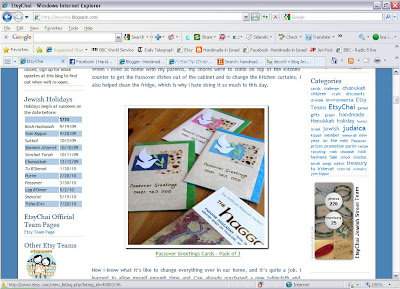 Passover is the holiday that commemorates the time in history when the Jewish people were freed from slavery in the land of Egypt. It is celebrated today in homes by having a Seder. The word seder means "order", and we read the Passover story in a special order from the book called the haggadah. Haggadah means "to tell" and we tell the story of our ancestors, and remind ourselves that we are now free people.
During the Seder we eat several traditional and symbolic foods. We dip a spring vegetable into salt water - the vegetable being a sign of Spring, or rebirth, and the salt water represents the tears of the slaves. We eat bitter herbs to remind us of the bitterness of slavery, and we eat a special mixture, called Charoset, made of apples, nuts, wine and cinnamon, that reminds us of the mortar that the slaves in Egypt made their bricks from.
The name "Passover" refers to the fact that God "passed over" the houses of the Jewish people when he was slaying the firstborn of Egypt. In Hebrew it is known as Pesach. 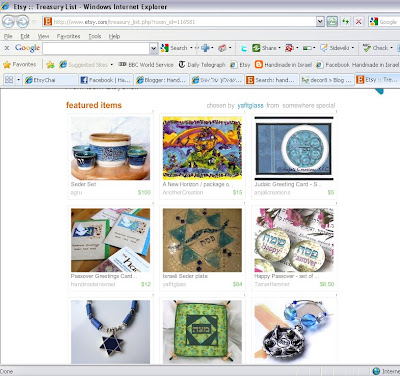 My boys have already been on holiday from school for a week and, between all the preparations, I took them to nearby Kfar Chabad, a Lubavitch community in central Israel, to see the special handmade, round-shaped Shmura Matza being made (top photos). Visiting the community really is a little bit like stepping back in time. Whilst the schools there are apparently well known for their strong vocational and technical training, this comes together with intensive religious study and seeing all the men and boys at work in the factory wearing the same clothes, and with their black hats hanging up on clothes pegs whilst they work, really does give the impression of a 19th-century Eastern European shtetl.
My Passover cards, seen above on the Etsy Chai blog and in an Etsy Treasury, with their own little pieces of matza on them, have received quite some publicity in the run-up to the holiday. They have appeared on the Etsy Chai blog, in a spotlight for the Etsy Chai team on the ByHand Gallery, and in no less than three Etsy Treasuries! Nonetheless, the next couple of weeks will probably not see much crafting going on as the days of Chol Hamoed, "weekdays [of] the festival", will hopefully take me away from my desk and allow my family and I time to explore and enjoy some great days out. I hope to drop by now and then with a few photos to show you.

PS. Thank you for all your votes in the Etsy Easter item voter. If you haven't yet been over to cast a vote for my daffodil and chick cards and wish to do so, please click here.
Posted by Handmade in Israel at 12:25

Thank you for posting this - it's fascinating to read more detail and background of your customs and culture. I shall be sharing your post with my elder daugter when she returns from school!

Thanks for sharing. I'm looking forward to our Seder meal this evening, though I still need to finish some cleaning tasks before sundown! Shalom.

Our Seder starts this evening.

Great post Lisa. I learn so much from visiting your lovely blog.
x

Love your post. Passover is not a word we used here in the Netherlands but I love the thought behind "your" English word. Orthodox Christians call Pesach often 'Pascha'. Pascha is the Aramaic word for Pesach. It's a bit confusing and am not sure if I'm right. So in my old bible it is pascha :-)It means: overslaan / to pass over

Thanks for the beautiful lesson in your blog.
Enoy your days.

Wow, you were already on this blog 8 years ago! This reminds me I have an early painting of blood sprenkled on the door post - have to look it up, so I can show it next year (2019) :) Have never seen matzes this big!